How To Make Fluff from Scratch

Today: Quit scouring the supermarket aisles for canned fluff. Sydney Kramer from The Crepes of Wrath shows you how to whip up a homemade version of this marshmallow spread. 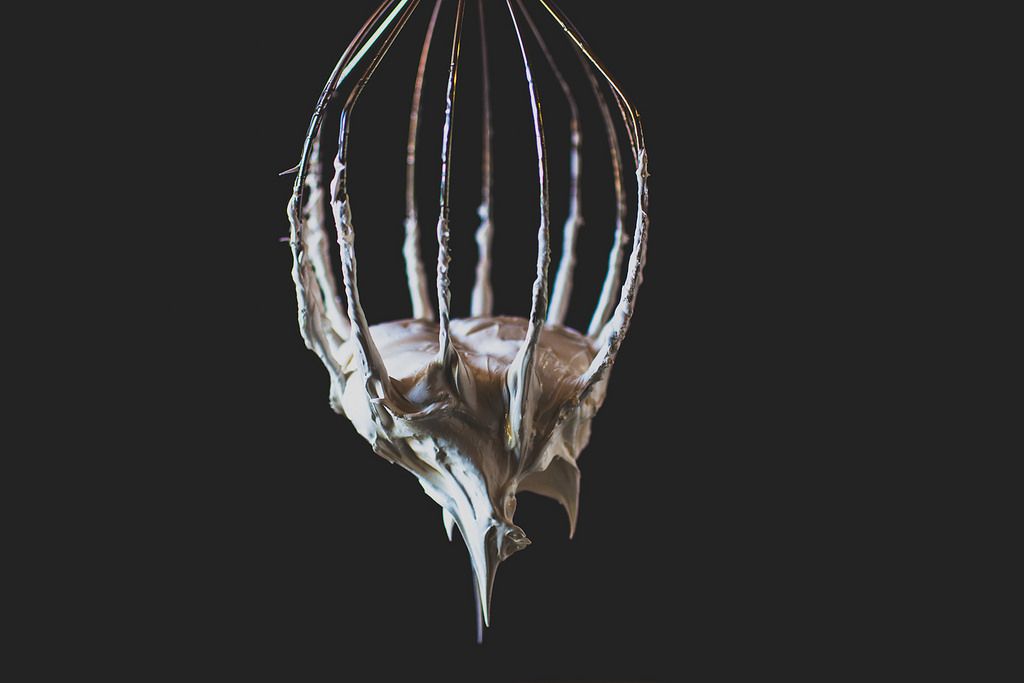 I was baking recently, and the recipe required about two jars of marshmallow fluff. I added it to my grocery list, but after checking two or three stores near my apartment, I came up empty. How is it possible that fluff is so hard to find? No matter: I knew I had seen it made from scratch somewhere before. I did a quick search on my phone and was pleased to learn that the only ingredient I needed that I didn't already have at home was corn syrup.

More: Once you make your fluff, mix it with some berries.

I know, I know. Corn syrup is bad for you! Corn syrup blah blah blah. Look, we all enjoy candy and ice cream and the occasional cheese fry or bag of Cheetos, don't we? A little corn syrup never hurt anyone, and life is all about balance. So, armed with a big bottle, I returned home to whip up my very own small batch of marshmallow fluff. 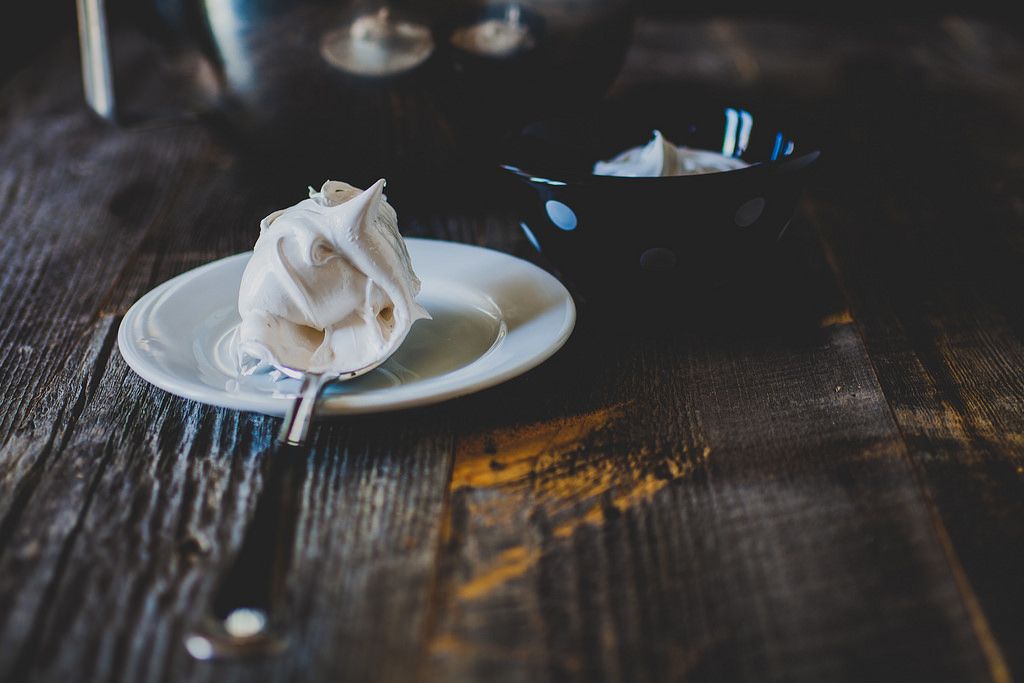 The process is so easy, it made me wonder why hadn't I always made fluff at home. I'll admit that when I first poured the hot syrup into the fluffy egg whites, I was a little nervous. But as soon as they had whipped for a minute or so, I knew I would be victorious. In under an hour you, too, can have your very own beautiful marshmallow fluff, ready to be added to pie, swirled into brownies, or slathered on a graham cracker with a slab of milk chocolate. I've also considered adding it to a frozen icebox cake.

I made a big, juicy berry pie and served a big bowl of fluff alongside it. Obviously, my guests happily spooned large dollops of sticky, sweet fluff on top of each slice, and some friends even ate it straight out of the jar. One even declared the fluff to be her new boyfriend and claimed that they were very happy together. As you can tell, this is some seriously good party fare.

More: Use your fluff in a no-bake S'mores Pudding Cake. 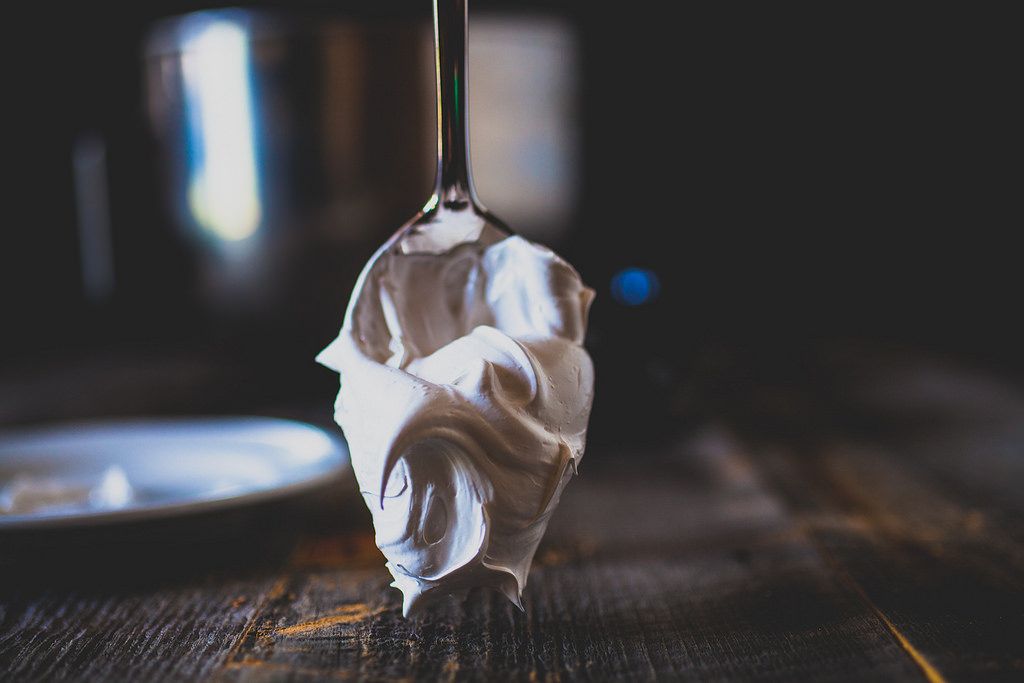 Don't feel constrained by the recipe, though -- get creative and use a vanilla bean instead of vanilla extract, add a little rum or bourbon, or try a sprinkle of cinnamon.

As an added bonus, it's also much cheaper to make fluff at home than it is to buy it. I've seen fluff priced for as much as $6 per small jar at a bodega in Brooklyn. For that price, you can make at least three jars' worth of fluff.

What you do with all of that extra goodness is up to you. I promise that I won't judge if you immediately remove your mixing bowl from its stand, grab a spoon, throw on a good movie, and go to town. My apartment has already seen this recipe duplicated at least three times, and there's no end in sight. It's just that addictive. 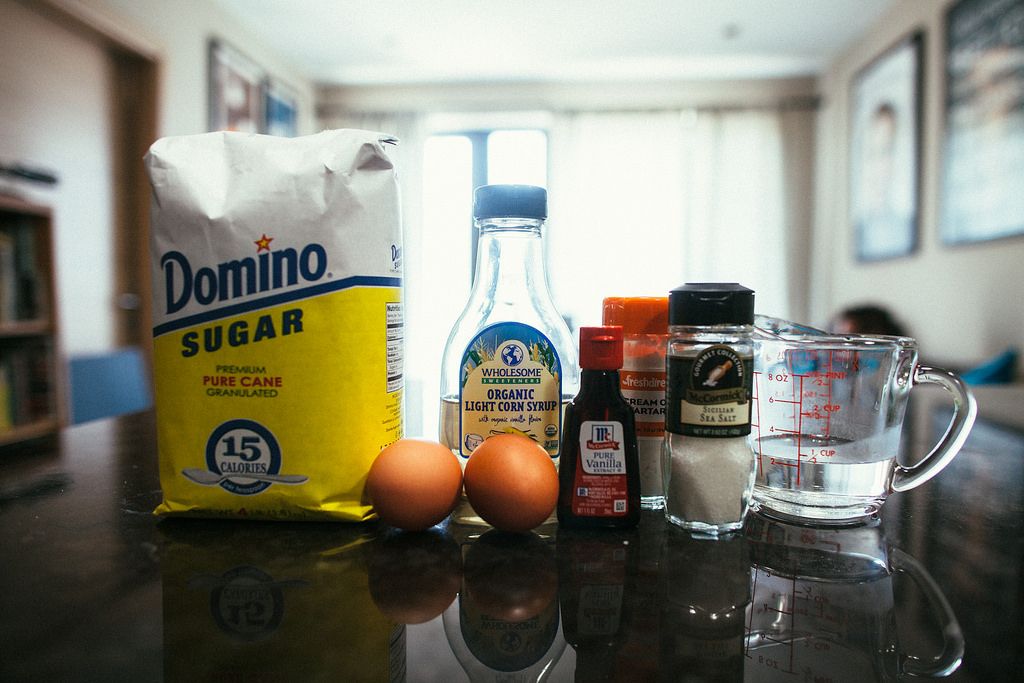 Adapted from Shauna Sever via The Chow 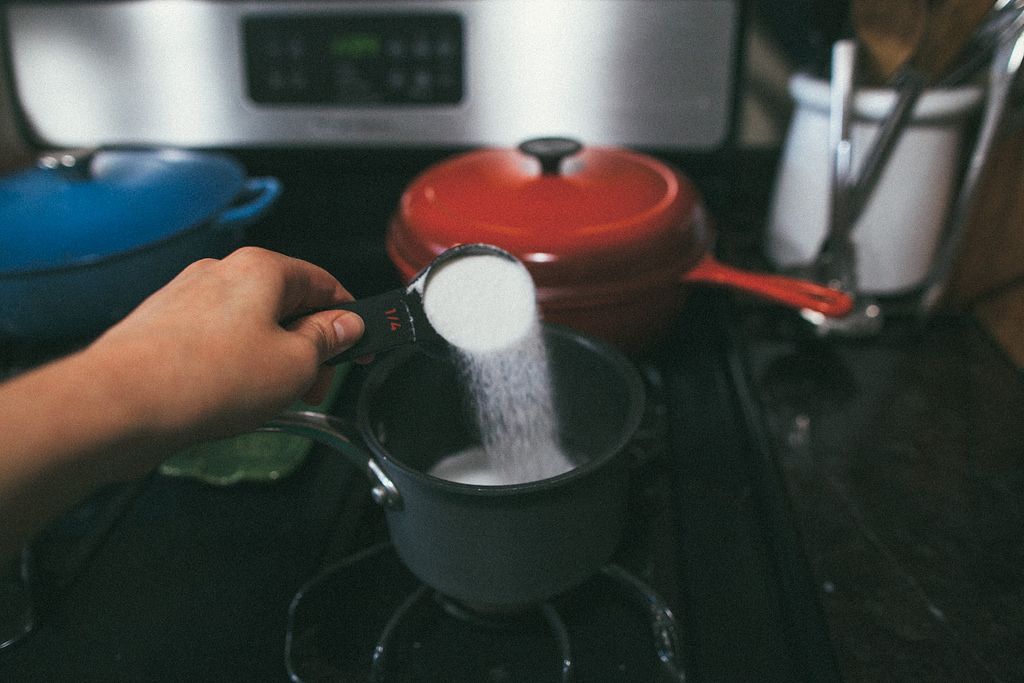 Stir together the sugar, corn syrup, water, and salt in a small saucepan over high heat. Bring the mixture to a boil, stirring often, until it reaches 240° F on a candy thermometer.

Be careful not to let the mixture bubble over: Turn the heat down if you need to, and keep a watchful eye over it. This might take a little longer than you think, but just keep at it. (Mine took about 10 minutes, but when you're standing there watching, it feels like an eternity. The mixture got stuck at around 220 for what seemed like forever, but then it eventually got up to 240.) 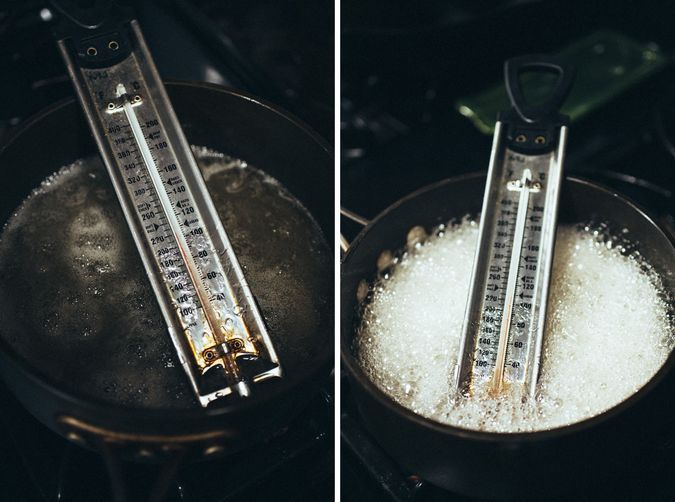 Meanwhile, place the egg whites and the cream of tartar in the bowl of a stand mixer fitted with a whisk attachment. Start whipping the egg whites to soft peaks on medium speed. You want to have the egg whites whipped and ready to go so that your syrup can be drizzled in. (If they whip before your syrup comes to temperature, just stop the mixer until the syrup is ready, which is what I did.) 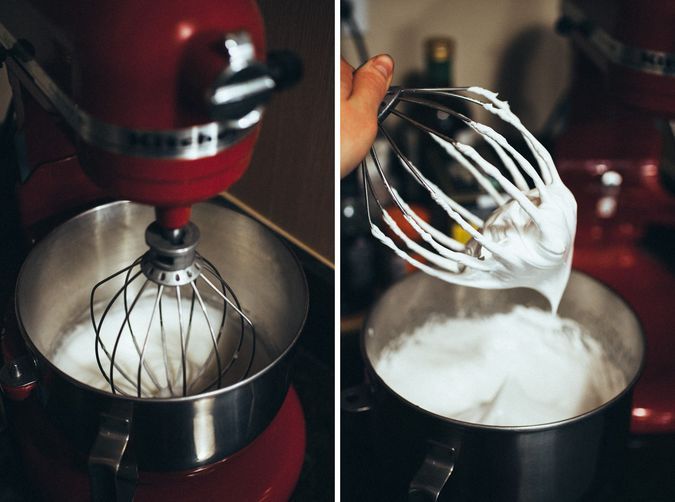 When the syrup reaches 240° F, reduce the mixer to low speed and slowly drizzle about 2 tablespoons of syrup into the egg whites to temper them. (If you add too much syrup at once, the whites will scramble.) Slowly drizzle in the rest of the syrup, no more than 2 tablespoons at a time. 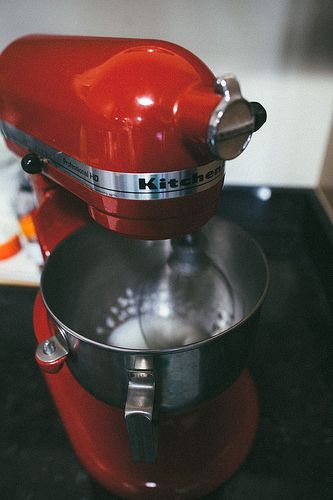 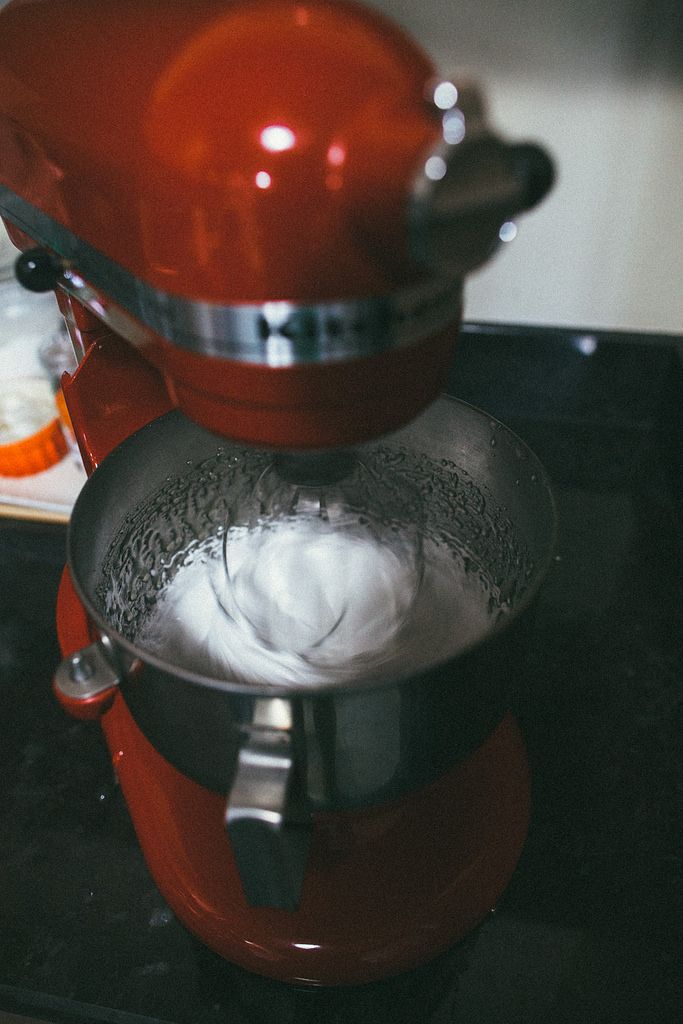 Increase the speed to medium-high, and whip until the marshmallow fluff is stiff and glossy. This will take about 7 full minutes, and you shouldn't try to speed this process up. Finally, add in the vanilla and whip for 2 more minutes. 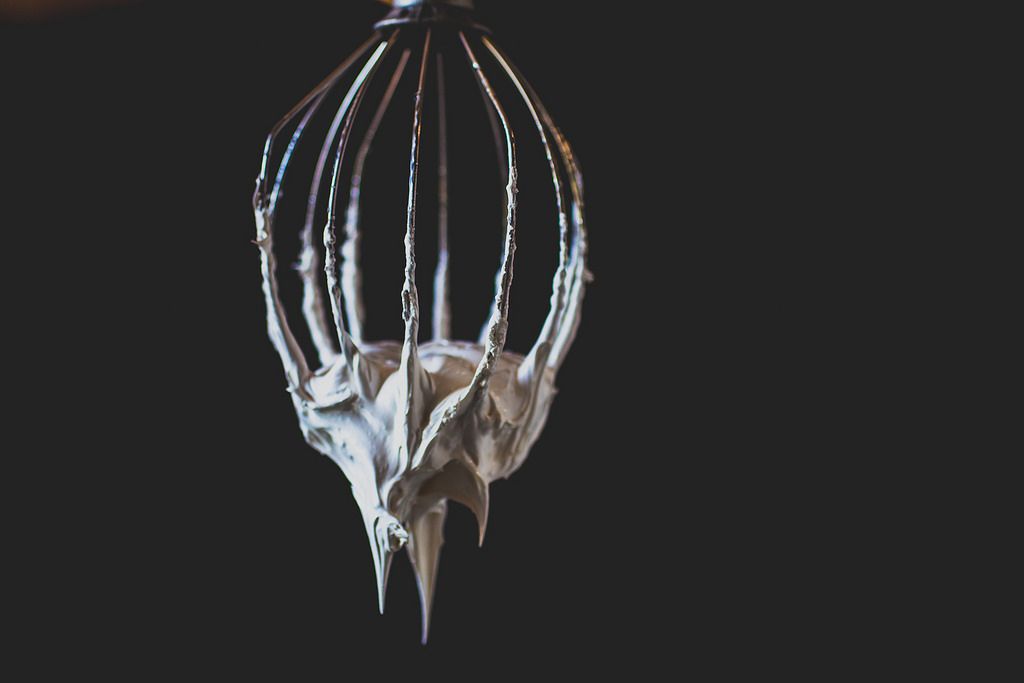 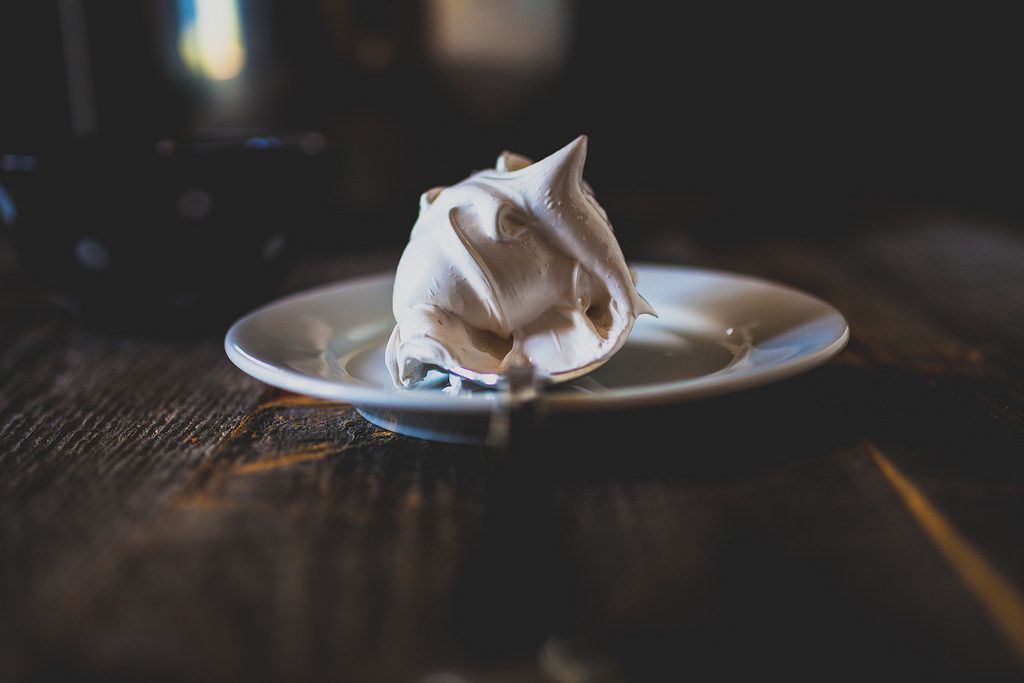 thecrepesofwrath.com
My name is Sydney Kramer, I run The Crepes of Wrath, and I am on an eating rampage.

Rebekah K. June 19, 2017
If you're going to make up a story as to why you made the recipe, at least make sure it's consistent, or at least believable. I used someone else's recipe, this article makes you sound like an idiot.

sheri September 2, 2014
Yum. I have a hard time finding marshmallow fluff in Houston for a fluffernutter sandwich. have to stock up on a couple of jars during the holidays when the stores carry it for people to make fudge with. Will have to try this. thanks

Emily P. August 4, 2014
Looks like a lot of fun to make yourself! Has anyone tried Agave syrup or Coconut syrup? That's what I have on hand. Thanks.

Andree August 3, 2014
I don't understand why fluff wasn't in the store. It's in every store here (Vermont) and where I used to live (Connecticut). Always with the peanut butter and jelly. Very strange.

Jennifer August 3, 2014
I live in a rural part of Maine and I know the large containers of fluff often sell out during the holiday season. I'm relieved have a backup for such emergencies...

Andree August 3, 2014
I'd rather use a recipe that doesn't require a candy thermometer myself. And they are out there. We've done it before.

Justine August 4, 2014
I know it's hard for New Englanders to believe, but Fluff (R) is a regional product made in Somerville, Mass. For most of the country one must buy mail order or get by on products like various brands of "marshmallow creme." An uproar ensued when a Mass. state senator tried to ban Fluffernutter (R) from school cafeterias. http://www.boston.com/news/local/articles/2006/06/19/can_this_spread_be_stopped/

jane August 3, 2014
I overheard someone talking about Fluff just a few days ago ... They said you can buy it at World Market! It's different then what they sell in the grocery stores.
I personally like the idea of making it from scratch, but I'm also anti GMO so I would be sure my corn syrup was organic Non GMO ...Thanks for sharing

Sarah August 2, 2014
Does the homemade fluff hold up well when baked, like stirred into brownie batter?

Justine August 2, 2014
Both Marshmallow Fluff(tm) and Fluffernutter(tm) are registered trademarks of Durkee-Mower and should be so acknowledged.

chum August 3, 2014
There is no reason, legal or otherwise, for commenters on a website or even professional writers to acknowledge trademarks.

Justine August 3, 2014
Written Usage
When writing an article or report about a trademarked company, you must follow the trademarked name with a superscript "TM" if the trademark is unregistered. For example, if the word "Snoozer" was trademarked, it would be written as "Snoozer TM." A superscript SM follows an unregistered name given to a company that provides a service. This is called a service mark, rather than a trademark. If a trademark is registered with the United States Patent and Trademark Office (USPTO), the registered trademark symbol, an "R" in a circle, is used after the name of the company. If the trademarked name is used several times in an article, only the first usage needs to include the appropriate mark. It is recommended that subsequent trademark usage be bold or italicized.

chum August 4, 2014
Nope. When mentioning a trademarked product in an article, you simply capitalize the name. Have you seen any references, ever, to trademarked products followed by a "TM" in The New York Times? No. But "Windsurfer," "Dumpster," and, yes, "Marshmallow Fluff" should be capped. You're citing eHow as a source?! I'll stick with my 30 years of experience editing many top American publications. Never once have we used "TM" after the brand.

SayAnythingKim August 1, 2014
Do you think this would hold up piped on top of a cupcake?
Author Comment

CrepesofWrath August 1, 2014
Spread, yes. Piped, no. Maybe you could add some confectionary sugar to stiffen it and then bruleed it?

Posie (. August 1, 2014
well this made my day. thanks for this!! love pb&fluff sandwiches at the beach

mrslarkin August 1, 2014
Hooray for fluff! Why does it look brown-ish? Is it the vanilla?
Author Comment

CrepesofWrath August 1, 2014
Might just be the light - it's super white IRL!

Jennifer August 1, 2014
I can't tell you how excited I am to try making my own fluff! This looks so good.

ChefJune August 1, 2014
"There's nothing wrong with corn syrup" unless you're allergic to it. Cane syrup can easily be substituted for it. And of course, all sugar is empty calories. But everyone needs a little dessert now and then. :)

beejay45 August 3, 2014
Glad to know I can sun cane syrup. I love corn syrup, but I've got three huge cans of cane syrup waiting in the wings. ;) Yay, fluff!

llysenw August 1, 2014
Corn Syrup and High Fructose Corn Syrup are two different things. There's nothing wrong with corn syrup except, of course, that they're empty calories but if you're making Fluff®, you're not worried about that.

Mimi August 1, 2014
This is wonderful! I see many fluffernutters in my lunchbox when school starts...