How to Make Moon Pies

Today: Shoot for the moon. Even if you miss, you can still make a moon pie. You'll have Lindsey Love of Dolly and Oatmeal to thank for this wholesome, grown-up variation. 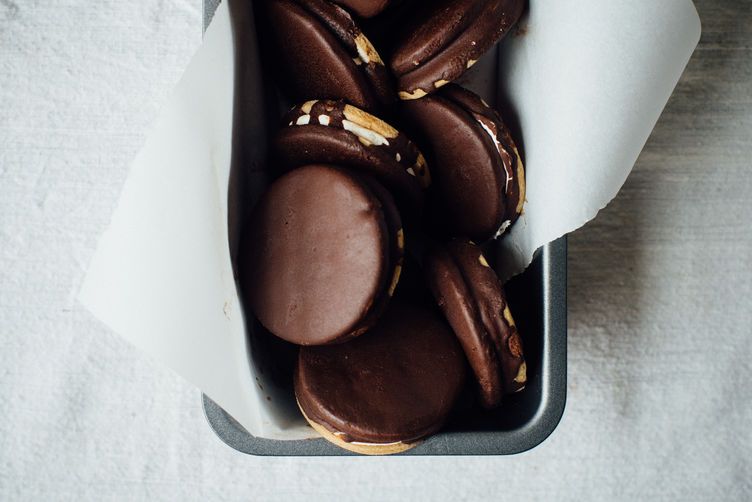 Moon pies (or MoonPies), often associated with the southern part of the U.S., are usually two round graham crackers filled with marshmallow crème and dipped in chocolate (or other flavored coatings). I was first told about these tasty treats by my dad, who grew up in New York City but spent summers in the South with his aunt, uncle, and cousins. I grew up in New York, so moon pies were like folklore to me, because I never actually laid my eyes on the sweet, chocolate sandwich cakes my dad described. Recently, my dad has been asking me to create a homemade version so he could revisit his memories of sitting by the creek with his cousins, sneaking moon pies right before dinner.

More: Whether you call it crème or fluff, you can make it at home.

What I think I have always loved about the idea of moon pies is that they are a cookie sandwich but the chocolate encasement makes them almost cake-like -- but in a mini, portable way. To me, moon pies were always a little bit of magic in dessert form. 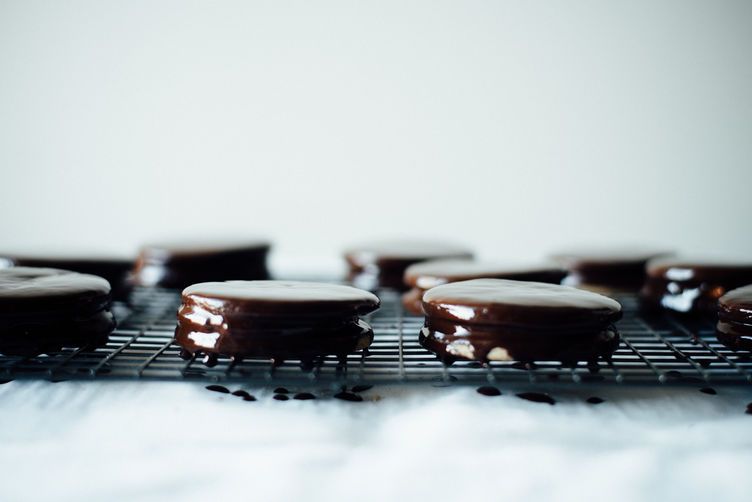 While it is probably hard to get the exact flavor and texture of commercial moon pies, this homemade version is more far more wholesome and uses no high fructose corn syrup. The graham cracker recipe below is gluten-free and dairy-free; however, please feel free to substitute your favorite graham cracker recipe or this one.

The marshmallow crème has a unique flavor, as I used maple syrup in lieu of corn syrup (again, feel free to use corn syrup if that's what you have on hand), which gives it a richer sweetness. And the chocolate that encases the sandwich is bittersweet to keep the treat from being overly sweet. 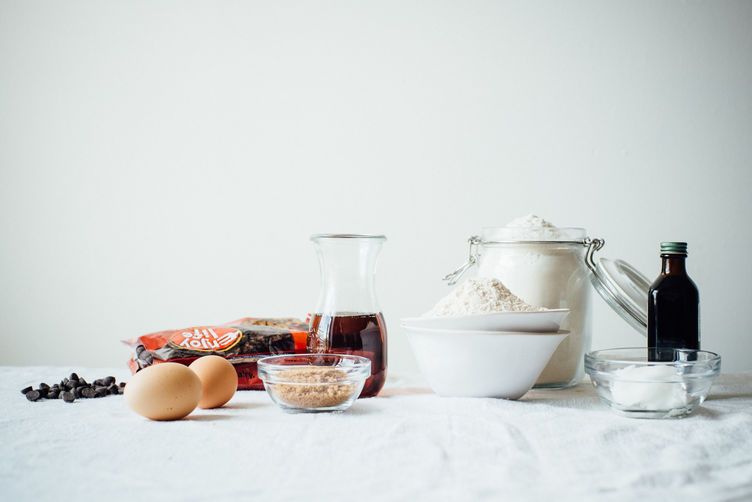 For the marshmallow crème:

For the chocolate shell: 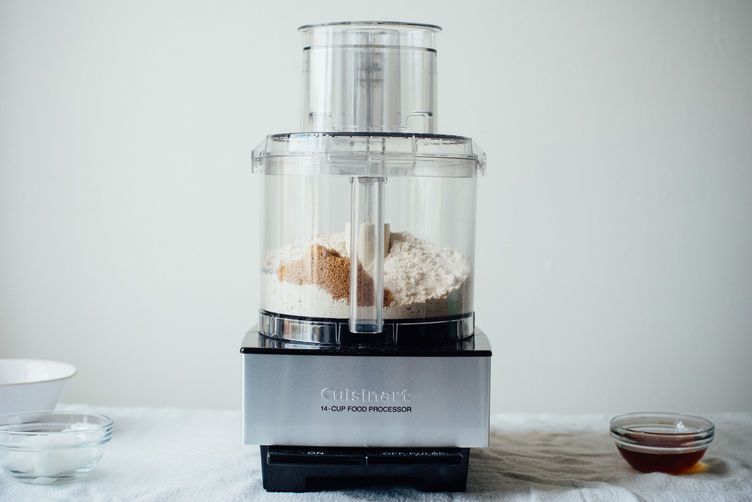 Add the flours, arrowroot, sugar, baking powder, salt, and cinnamon to a food processor and pulse to mix. Add the solid coconut oil and pulse until the mixture is crumbly. 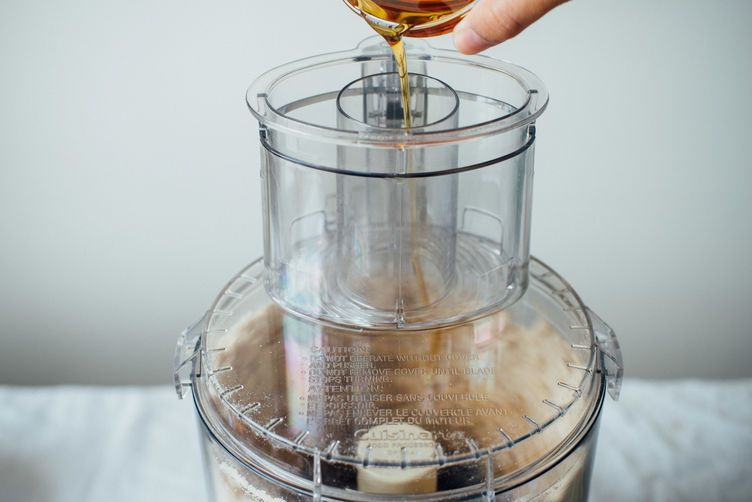 Whisk the almond milk and the maple syrup together; with the motor running, pour the liquids through the spout of the food processor to distribute it evenly. 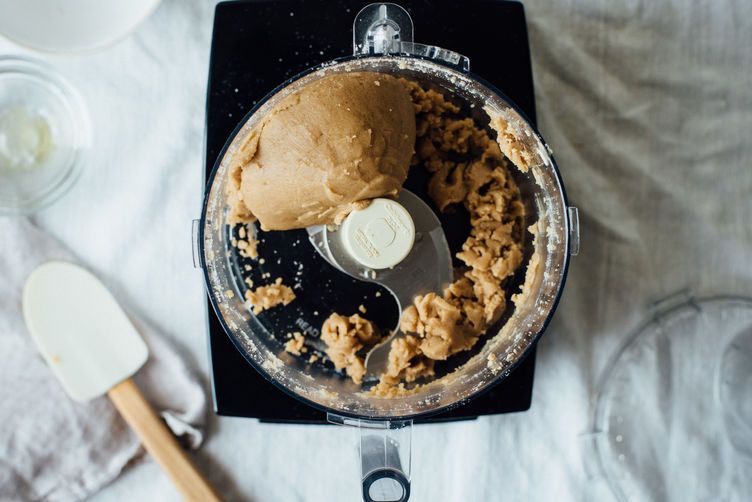 Once the dough has come together to form a ball, gather it together and knead it until smooth. Evenly divide the dough, then flatten each piece into a disk and wrap in plastic wrap; let the dough chill in the fridge for 30 minutes.

Preheat the oven to 350° F and line two baking sheets with parchment paper. 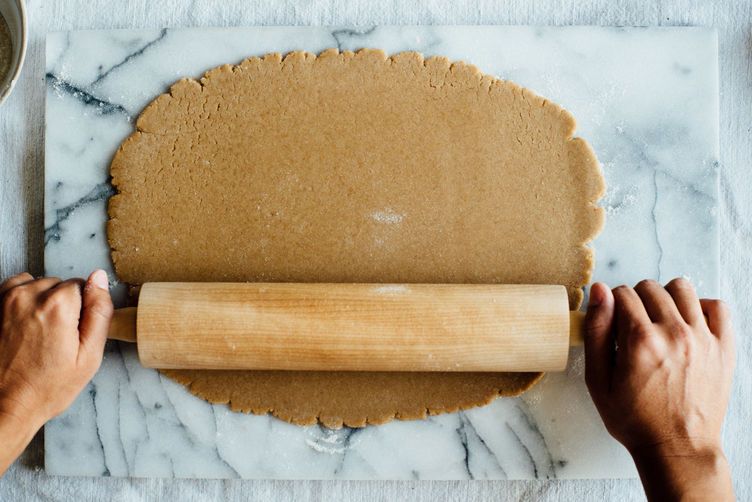 On a floured surface, roll the dough out to a 1/4 inch thickness. Stamp out the cookies with a 2 1/2- to 3-inch round cookie cutter and place them on your prepared baking sheets. Re-roll the dough until it has all been used. (If you want, use a fork to make decorative indentations.)

Bake the cookies in the center of your oven for 10 to 12 minutes, rotating halfway through, until their edges are lightly browned. Remove the cookies from the oven and let them cool completely. (If you’re making them ahead, store the cookies in a lidded container in the refrigerator for up to 2 days.) 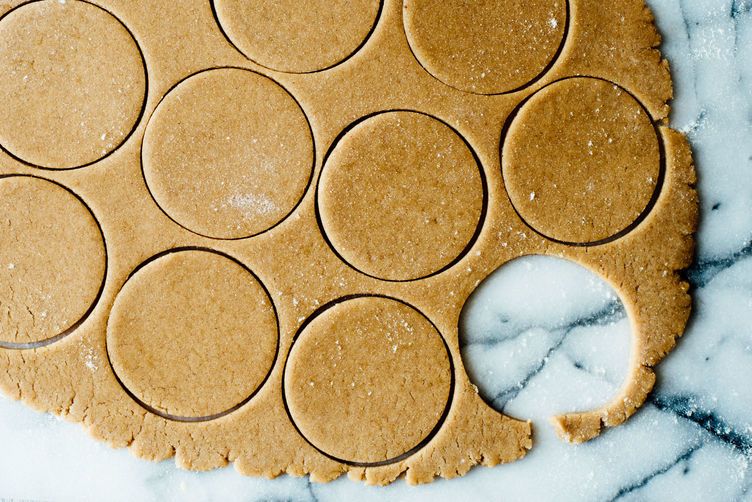 To make the marshmallow crème, beat the egg whites and cream of tartar on medium speed until soft peaks form, about 1 minute. (You can use a hand mixer, but if you own a stand mixer, it will be easier later on when you drizzle in the sugary syrup.) Set the mixture aside. 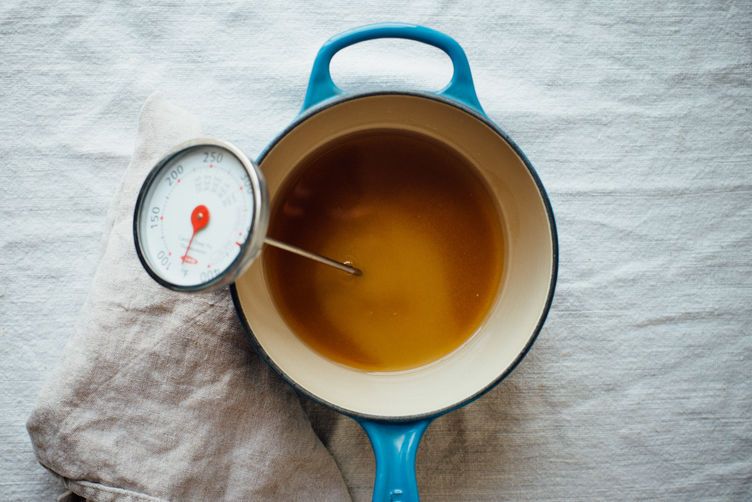 In a medium-sized saucepan over moderate heat, combine the sugar, maple syrup, water, and pinch of salt; whisk until the sugar and salt have dissolved, then cook the syrup on medium-high heat until your candy thermometer reaches 240° F. (Each time I make this, my thermometer plateaus around the 200° mark, no need to worry if this happens to you, it'll reach 240° eventually -- just be patient.)

Remove the sugar syrup from the heat. With your mixer on medium, slowly drizzle the syrup down the side of your mixing bowl so that you're beating the egg whites and the sugar syrup together. When all the syrup has been mixed in, increase the speed of your mixer to high (medium, if you're using a stand mixer) and beat for 5 to 7 minutes, until the crème is stiff and glossy. Transfer to a container with a fitted lid and let it rest in the refrigerator until cool. (This step can also be done ahead of time if need be.) 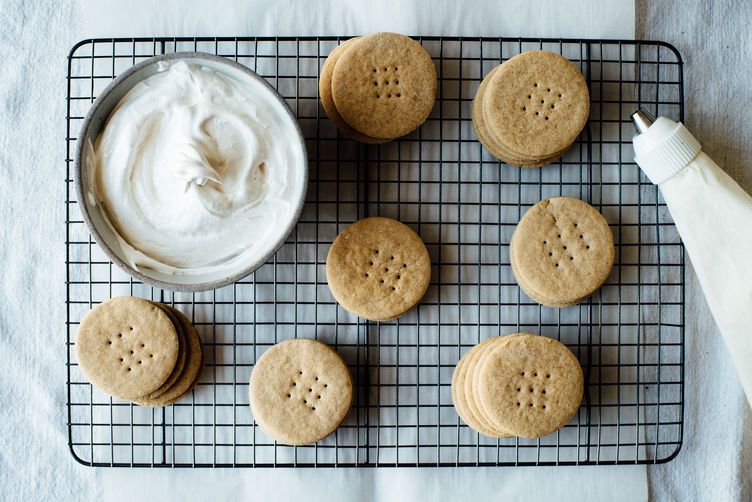 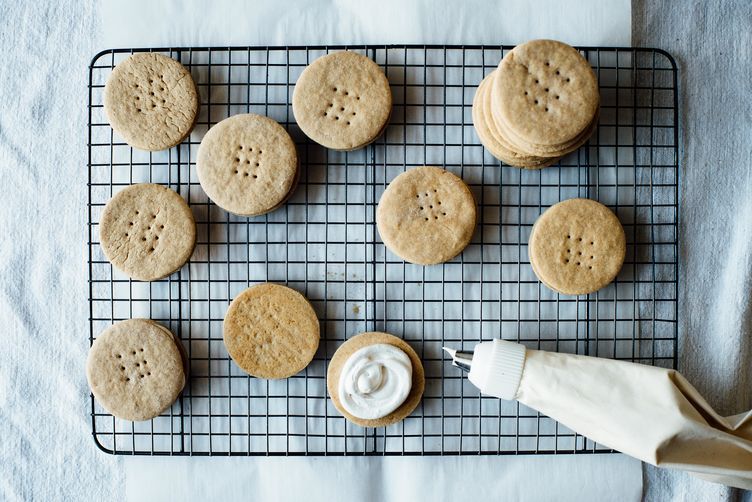 To assemble the moon pies, spoon marshmallow crème into a pastry bag (or a large plastic bag with the corner snipped) and distribute an even layer of crème on the flat side of half of the cookies. 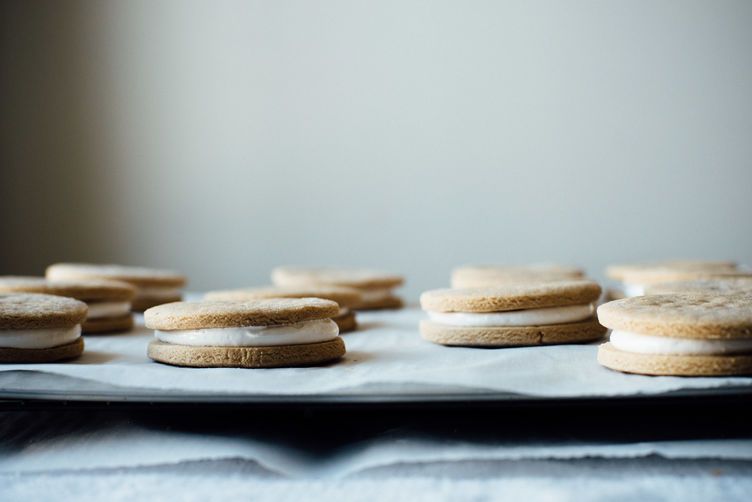 Gently place another cookie on top of the crème, and allow the sandwiches to rest in the fridge while you prepare the chocolate shell. 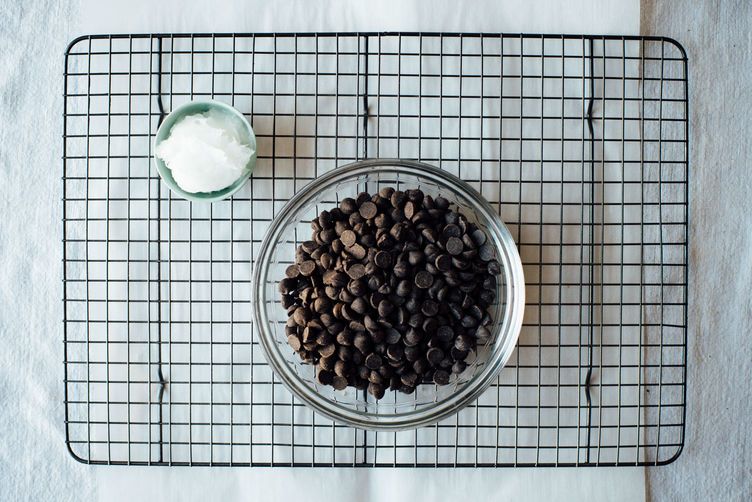 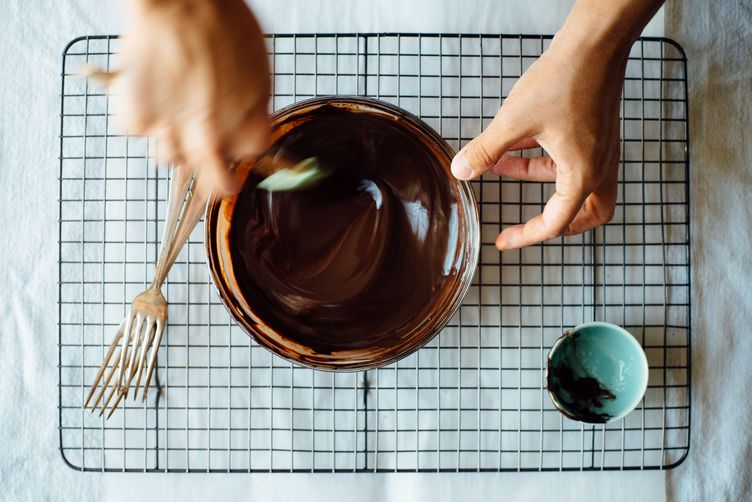 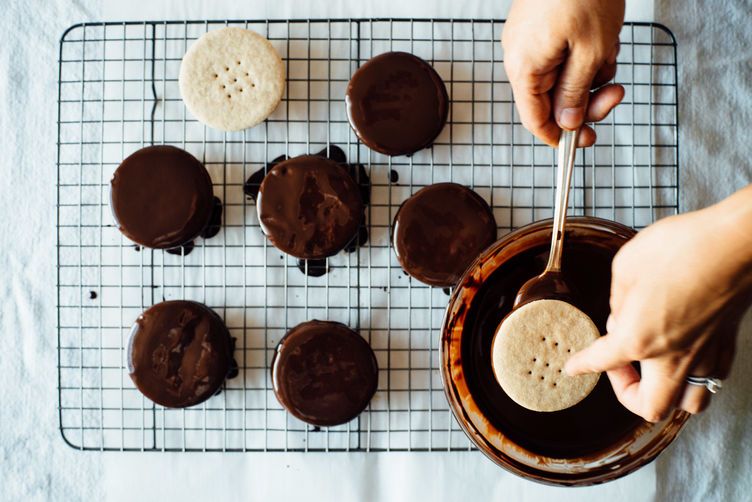 Prepare a work surface lined with parchment paper, and remove sandwiches from refrigerator. Using a large spoon, drop one half of the sandwich into the chocolate, turn it over so both sides are coated, and then place it on prepared parchment. Repeat with remaining sandwiches. 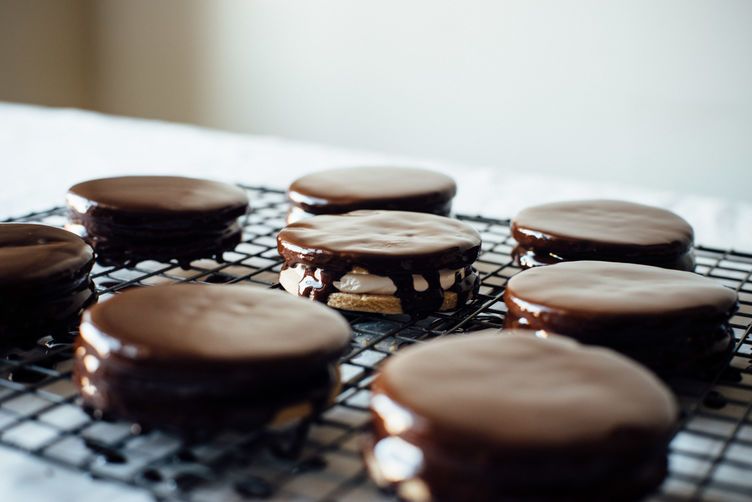 Allow the chocolate shell to harden. 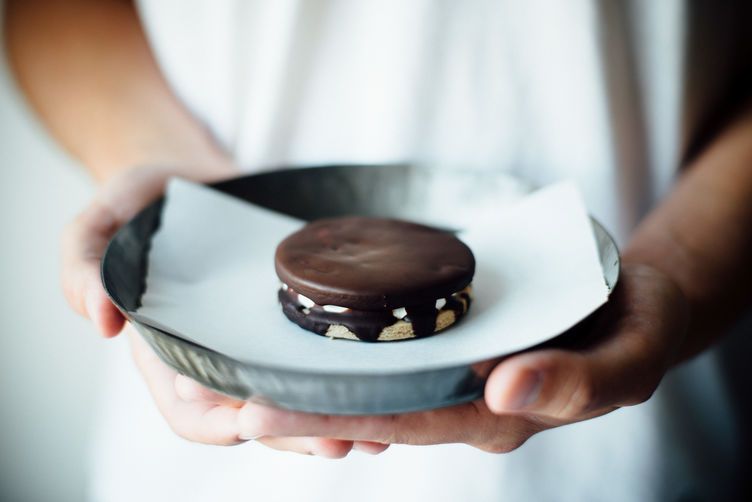 To store, line a lidded container with parchment paper, and layer paper between each layer of cookies. Store moon pies in the refrigerator for up to 4 days.

dollyandoatmeal.com
Lindsey S. Love is a food blogger living in Brooklyn, NY with her husband. Her cooking and baking focus on healthful gluten free and dairy free, with occasional vegan recipes. You can follow her at dollyandoatmeal.com for additional recipes.

Kala B. August 6, 2016
I've always loved MoonPies, glad there is a healthier version!
The way my granny always made them for me was to put it on a plate, and pop it in the microwave for 10 seconds. The chocolate melts, and the marshmallow puffs up. It's wonderful.

Sam @. October 26, 2014
This recipe is gorgeous! The marshmallow filling looks divine! I loved moon pies as a kid, will have to try them again as an adult (with these grown up ingredients!) Thanks for sharing!

Sini |. October 22, 2014
I heard about moon pies for the first time a few days ago, and it was such a happy surprise to see this recipe today! Lovely all the way through.
Author Comment

Christine October 22, 2014
These look amazing! I guess moon cakes are sort of like s'mores? I hadn't heard of them until now but they're now on my weekend baking list!
Author Comment

Lindsey S. October 23, 2014
yes, very similar components to s'mores. but moon pies are like a cookie/cake/sandwich hybrid with less influence in the gooey marshmallow, i suppose :)

Cynthia C. October 21, 2014
YES!!!! This takes me straight back to southern childhood nostalgia. These are amazing. (And these photos.......... just too perfect for words!)
Author Comment