A Different Kind of Cheese Cake

Today: Take the cheese you would normally grate onto pasta or shave onto salad and put it into a cake. And no, this is not a gimmick. 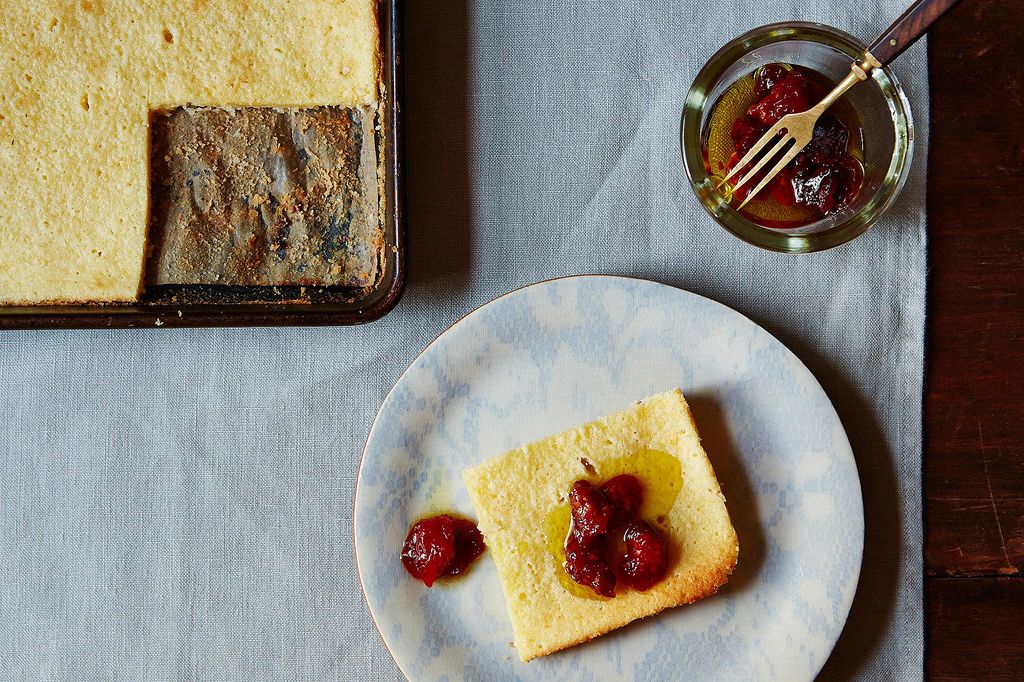 If you watch Bizarre Foods and plan your restaurant excursions around the latest New York Times reviews, you know that there are a lot of foods that people cook and eat just to say they did. These can range from the unfamiliar (pig blood), to the wildly unhealthy (donut breakfast sandwiches), to the bacterial (spirulina). I’ll admit that it was the same impulse that first drew me to this cake, which is the brainchild of Kimberly Janusz of Del Posto. Sure, I thought it would taste good, but as I grated the Pecorino and incorporated it into the batter, I chuckled to myself: I was making a cake made of cheese normally eaten with salad or pasta. How cheffy. How elevated.

But this cake is not a gimmick. While it might be fun to serve it at a party for the shock factor, it’s not going to lose its appeal once the secret ingredient is identified. You’ll return to it because it balances sweet and savory -- Brooks Headley, head pastry chef at Del Posto, calls it a Frankenstein recipe for this reason -- and because it provides a way to quietly forget your New Year’s resolutions under the pretense of just enjoying a bit of cheese after dinner.

And it's not nearly as divisive as some of the other cakes I've written about. Though it’s certainly not meek -- it holds more flavor than its humble thinness would suggest -- it’s not a show-off, either. It’s too confident for that. It wants to please you (yes, even you there with your furrowed brow), not turn you away. 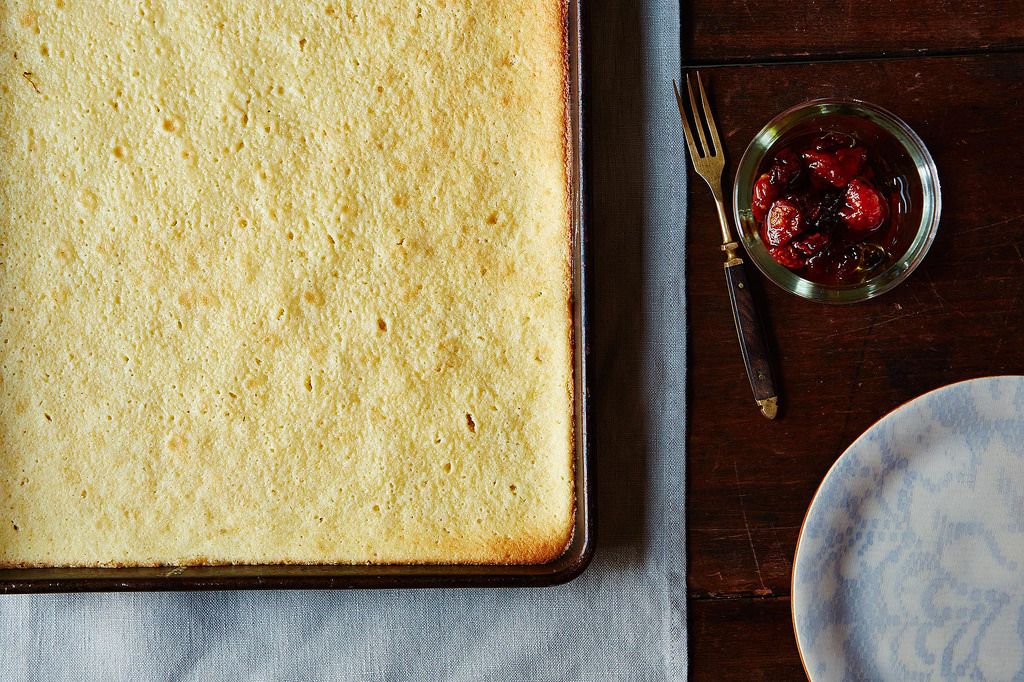 How does it do this? With Pecorino, first and foremost. Pecorino is decidedly not blue cheese; Pecorino is not even as funky as Parmesan. It’s salty, but it’s easy to like. The addition of cream cheese also helps, adding a smooth tanginess that melts into a cohesive custardy middle alongside the Pecorino. And sugar. Sugar makes the cake a dessert rather than a bread to eat with dinner.

The flavor isn’t intimidating -- if you like cheese blintzes and the crispy bits of grilled cheese, you will probably like this cake, too -- and the technique isn’t scary, either. The recipe comes from one of the finest restaurants in New York City, but it’s easy: Cream butter, sugar, cream cheese, and eggs; mix that with flour, grated Pecorino, salt, and baking powder; then, stream in heavy cream and bake until golden. There are no acetate cake rings to fumble with or freeze-dried ingredients to mail order. 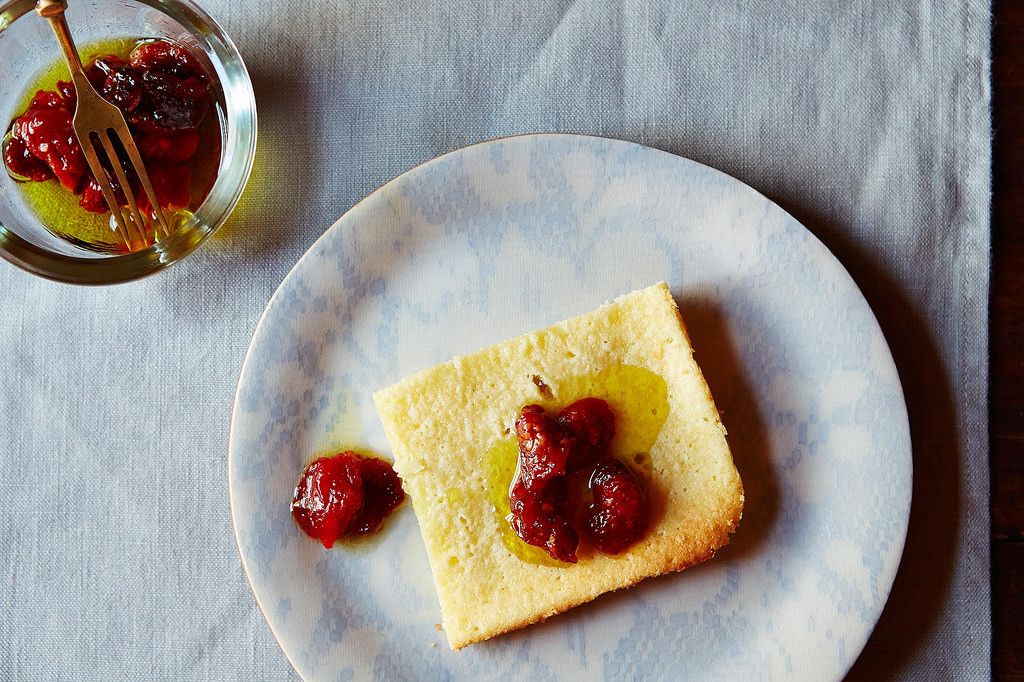 The cake is accompanied with small, sweet, and sticky candied tomatoes that, like all good accessories, offer a pop of flavor and color. You might be tempted to skip them, but don’t. For those of you who have purchased store-bought tomatoes in a state of denial only to crash into reality when you puncture their anemic centers, here is a way to get the most of them (and to pretend it isn't twenty degrees outside). These mid-winter tomatoes are the kind that need a coating of sugar and a slow roast in a warm oven before you can see that they are, indeed, related to their reddest July brethren. So maybe you wouldn’t think to eat tomatoes in January, but you wouldn’t normally eat a cake made of cheese either, so what’s to lose?

Developed by Kimberly Janusz and served at Del Posto

For the candied tomatoes:

Cherie January 21, 2015
50 years ago my German next door neighbor made what she called cheesecake and it was close to what I imagine this to be. It had a somewhat creamy center with more cake-like texture toward the outside edges, but with a decidedly savory cheese flavor. I've looked for something similar for years - it was wonderful!

Kaite January 20, 2015
Salvadorian Quesadilla Cake is very similar, so I'm not surprised by this recipe.

My friend's mother would make it and I would devour as much as I could. I'm curious to try the recipe posted above to see how it compares.

Kenzi W. January 19, 2015
I've been dreaming about this since I first tasted it. Can't wait to make it again!