16 Red Cabbage Recipes That Are Anything but Boring

I have my husband's grandmother Violet to thank for introducing me to my favorite holiday side dish: Danish red cabbage, which is a mix of vinegar, sugar, lots of butter, a jar of red currant jelly, and two heads of chopped red cabbage. I’ve never seen Violet make it, but I’ve heard that when she does, she tends to it all day, dipping a fork into her Dutch oven often to taste and adjust and season. Apparently, no one in the family makes it as well as Violet.

Every year in the weeks leading up to Thanksgiving, I look forward to pulling out her handwritten recipe card and attempting to replicate this old family standby. I love it so much, in fact, that I associate red cabbage with only this dish. And as soon as the holidays pass, I don't want to think about any other cabbage preparation besides this one, the following fall.

So when heads of red cabbage (also called purple cabbage) show up in my CSA box, I struggle to put them to use, often shoving them in the vegetable bin where they sit for weeks until I shred them into a basic slaw or simply roast them in wedges. Both are preparations that always leave me wanting.

How to Prep & Store Red Cabbage

Red cabbage is coarser than green and, especially when served raw, needs a little more attention, more seasoning, and a bright, sharp dressing to draw out its sweetness. It should feel firm and heavy, with shiny leaves laid tightly against one another.

Store it in a cool environment such as your fridge, basement, or garage, and when you're ready to prep, remove any outer leaves that look wilted or scraggly. Then, proceed with preparing as your recipe directs. If you're preparing the cabbage for a raw salad, cut it in half from pole to pole, then remove the triangular-shaped core in each half with a sharp knife. Cooking it instead? Boiling it for a couple of minutes in salted water should remove some of its pungency. 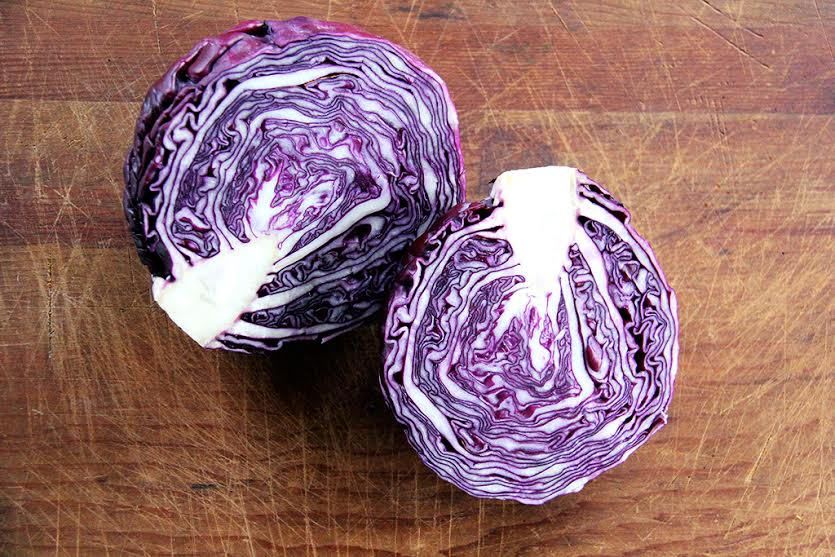 Red cabbage's firm texture makes it ideal for slaws and salads, where it won’t wilt under a hearty dressing. But as with all cabbages, red cabbage can be braised, steamed, stir-fired, stuffed, or made into sauerkraut—here are a few recipe ideas. A one-pot stew filled with tons of hearty vegetables, like red cabbage, potatoes, and black-eyed peas, plus thick slices of pork sausage that bring rich flavor to the broth. 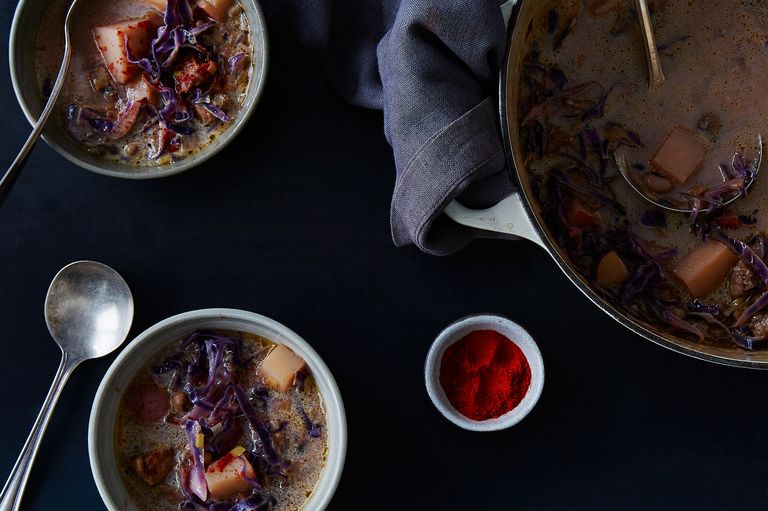 If you're a fan of crispy edges, take your braised red cabbage over the top and let the outside layer get a bit charred—what's underneath will still be nice and tender. This recipe took home the top spot for our "Your Best Grilled Pork" recipe contest, and it's not hard to see why: The pork burgers are smoky and juicy, the red cabbage slaw balances with crunch, and the buns are buttery soft. 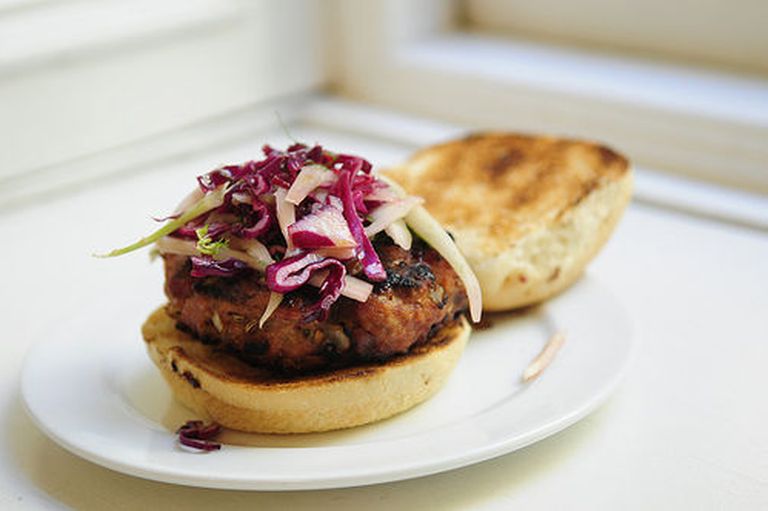 This passed-down recipe for glazed cabbage strikes just the right balance between sweet and sour, and makes an A+ holiday side dish (perfect for serving next to creamy mashed potatoes and slices of roast chicken). 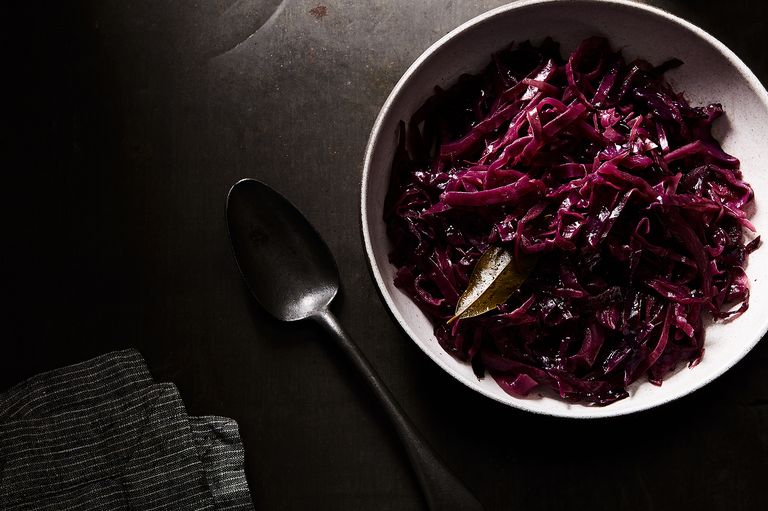 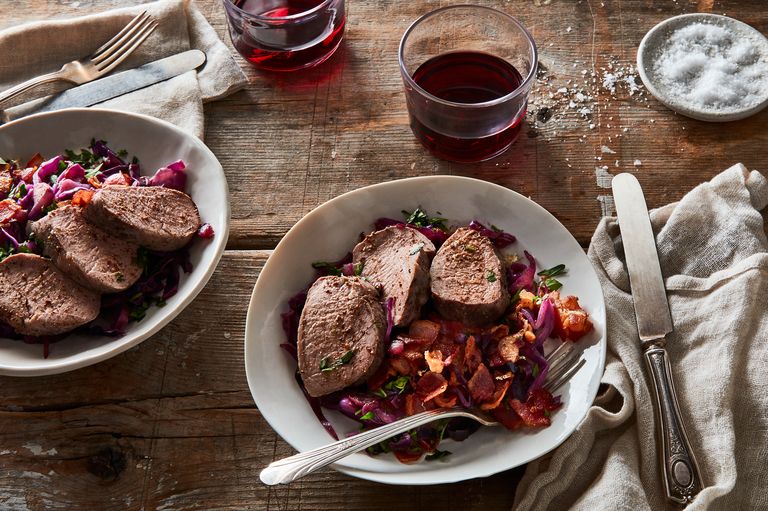 In this vibrant crunchy salad, chickpeas are roasted with za'atar and tossed with shredded red cabbage, fennel, carrots, mint, feta, and more. 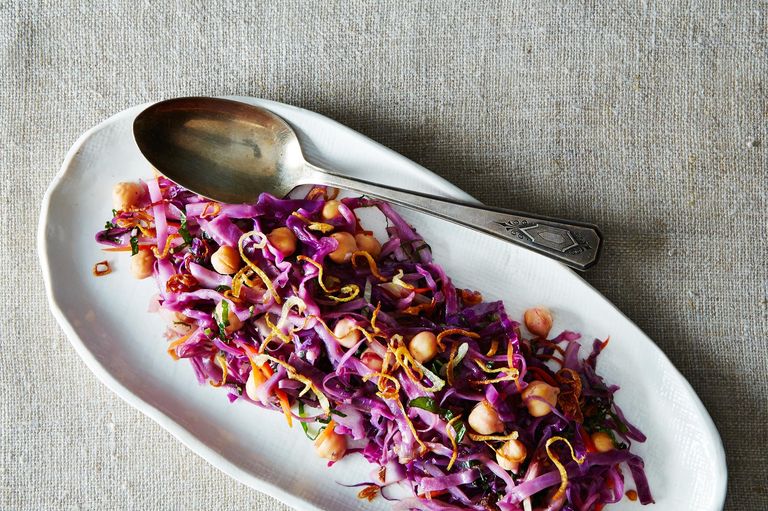 Another red cabbage slaw we simply can't get enough of—it's used here for topping chicken tacos, but it'd taste just as good with grilled meats, burgers, you name it. 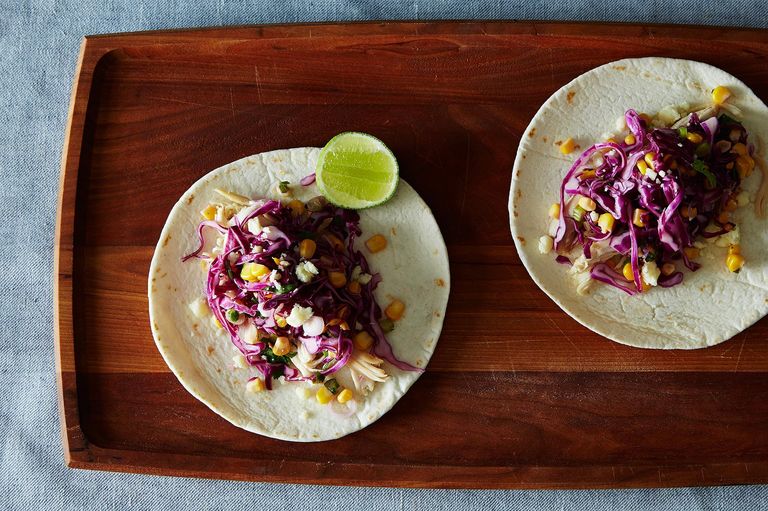 This super-salad is everything you could ever want in a desk lunch (especially if you're working from home)—it's filling, creamy, tangy, and crunchy all at once. "A technique for bringing out the hidden beauty in cabbage—and a soupy, risotto-ish cure for the end-of-winter blues," writes Genius Creative Director and Founding Editor Kristen Miglore. Sign us up. You had us at "warm bacon dressing." A stewy, soul-warming dish you'll want to keep in rotation all winter long. Yes, you can use banana bread for sandwiches (just griddle it first). 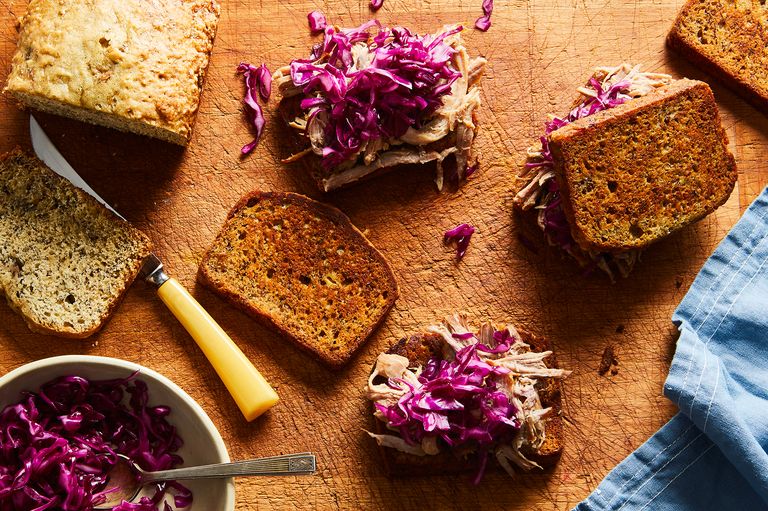 "It's a dish from nowhere," says food writer Lavanya Narayanar. "Though it has South Indian flashes and contains many common North Indian spices, I've never come across anything quite like it. 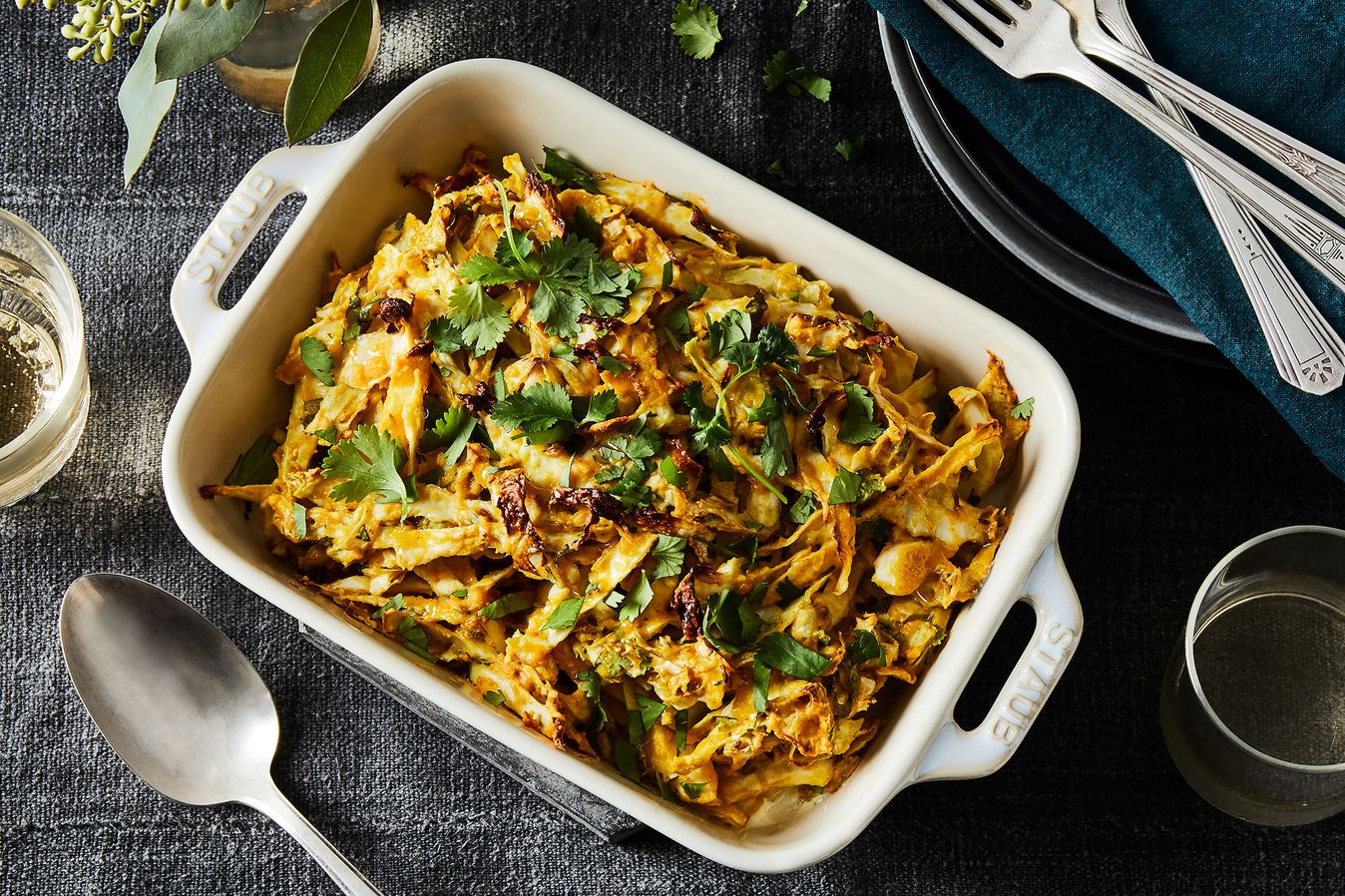 Whoever said that vegetables are boring has clearly never met this towering summer sandwich, spread with a zingy basil mayo you'll want to put on everything. The paprika- and cayenne-spiced chicken thighs might be the star of these lettuce wraps, but they certainly wouldn't feel complete without a shredded red cabbage garnish. What's your favorite red cabbage recipe? Tell us in the comments!

This article was updated in September 2020 by the Food52 editors.

Whether you're in the mood for some soup-simmering, leaf-peeping, or nothing at all, your dream weekend awaits...

RG1 October 7, 2022
I picked up 2 organic red cabbages today, and came here looking for my favorite recipe from the 90s- cabbage with raw ramen noodles.

Karl W. September 30, 2020
Of the cabbages, red cabbage is the least good raw; I don't think it's color feature is sufficient to get over that. Cooking or pickling does wonders for it.

lavagal January 25, 2015
Beautiful salad. I live in Hawaii so all of these ingredients are pretty easy to come by. Except for the salted konbu, I'd really think this is a Japanese dish --seaweeds, mirin, white sesame seeds. Anyone else catch that, too? Mahalo, loved your narrative.

Alexandra S. January 25, 2015
What a dream! I lived in Southern California for almost 4 years, and my biggest regret is not making the effort to get out to Hawaii. And yes, absolutely, lots of Japanese influence in this salad. Check out the original article if you feel like it: http://www.nytimes.com/2014/07/27/magazine/a-chinese-caesar-salad-with-umami.html?_r=1 Sam Sifton notes that the salad Danny Bowien and his head chef created "owed more to Japan than to Caesar, who in the end contributed only a tin of anchovies."

lavagal January 25, 2015
Aha! I subscribe to Sam's Cooking newsletter. He's so fun. Thanks for the link! And yes, you should come. Fares TO Hawaii are cheaper than fares FROM Hawaii (no logic there)! And now that Hawaiian Air flies to the U.S. Mainland, there's a carrier who provides Aloha from check-in to the HNL arrivals terminal! Mahalo!!!

I subscribe to Sam's letter too — it really is fun!

mare January 25, 2015
hi alexandra-
i have a green cabbage staring at me from my fridge shelf. Would it work in place of the red, do you think, or should i save that for something else and grab a red one at the store later? Thanks!

Alexandra S. January 25, 2015
Absolutely use the green! I think green cabbage will be delicious here, maybe even more so than purple.

Pegeen January 25, 2015
Wonderful recipes - thank you so much. I've got a wealth of red cabbage too.

Would love to see your grandmother's Danish cabbage recipe! Any chance of typing out that index card here? :-)

Place chopped up cabbage in large Dutch oven and cook with butter, jelly, sugar and vinegar until soft. The longer you simmer it, the better it will taste. Add more sugar, jelly or vinegar to taste. Add salt to taste.

My notes: This really is a "to-taste" recipe. When we make it, we simmer it for hours and everyone weighs in on what it needs — more salt, more vinegar, etc. — but it all comes together in the end :)

Alexandra S. January 25, 2015
It's raw actually. I had never used kasha before this recipe, and I would have guessed by looking at it that it would have to be cooked, but in this recipe it gets a quick toasting in some hot oil and that's all.

HalfPint January 23, 2015
Could have used this article during the summer when my CSA box always seem to have red cabbage.

Alexandra S. January 23, 2015
I love love love belonging to a CSA and usually am astounded by the quality of the produce, but sometimes — purple cabbage in the summer, for example — it can be tough. I mean, I am sure the purple cabbage in the summer tastes better than the ones we've been getting, which have been stored, but still, when tomatoes and cucumbers and peppers are everywhere, some CSA produce is just hard to accept. Yes, keep this one in mind for next summer!

Sabine January 23, 2015
The salad recipe is wonderful. I´m used to having apple red cabbage (cooked, not raw) e as a side with venison. It works well with blue cheeses and nuts as well, as tartelettes than can be made with leftover cabbage.

Alexandra S. January 23, 2015
Yes, cabbage + apples are such a good match. Love the idea of tartelettes!

Greenstuff January 23, 2015
One year, I went on a bit of a red cabbage and apple spree. Like you, I was used to the long-cooked versions. But I made a lot of others--lightly sautéed, raw, basically all the methods in Alexandra Stafford's wonderful article. I was already a red cabbage fan, but it amazed me that a vegetable we mostly relegate to those times when we can't get much else could taste so different with changes more in method than in ingredient. Great job, Alexandra.

Alexandra S. January 24, 2015
Chris, that's actually what I love about a CSA — it forces me to experiment, and often I find preparations that become my favorite. Thank you for your nice comment!

Amanda S. January 23, 2015
I need this in my life immediately. Is it one of those salads that gets better with some quiet time alone, or do I have to eat it quickly (not daunted by the prospect)?

Alexandra S. January 23, 2015
Haha, I love it. You know, it was not my experience that the salad got better the longer it sat. I was totally expecting it to, but oddly, it almost dried out a bit and the toasted kasha loses a bit of its texture and crunch. I vote for consuming immediately.