10 Things You Should (or Shouldn't) Eat With Peanut Butter

Our interest in strange peanut butter combinations was piqued by a staff member who told us tales of a fried egg, bacon, peanut butter, mayonnaise, and American cheese sandwich in her hometown of Cleveland. This sandwich is not a thing of myth—it's called the Elsie Combo, it's available for $6.25 (pre-tax) at Tommy's Coventry, and it comes as a triple-decker.

Curious about other unusual foods eaten with peanut butter, we asked on the Hotline and on Facebook: "What's the weirdest thing you eat with peanut butter?" Then, we threw caution to the wind, bought two jars of our favorite smooth peanut butter, and set out to make—and try—ten of the most bizarre-sounding combinations. Here are our verdicts:

Wouldn't do it again: 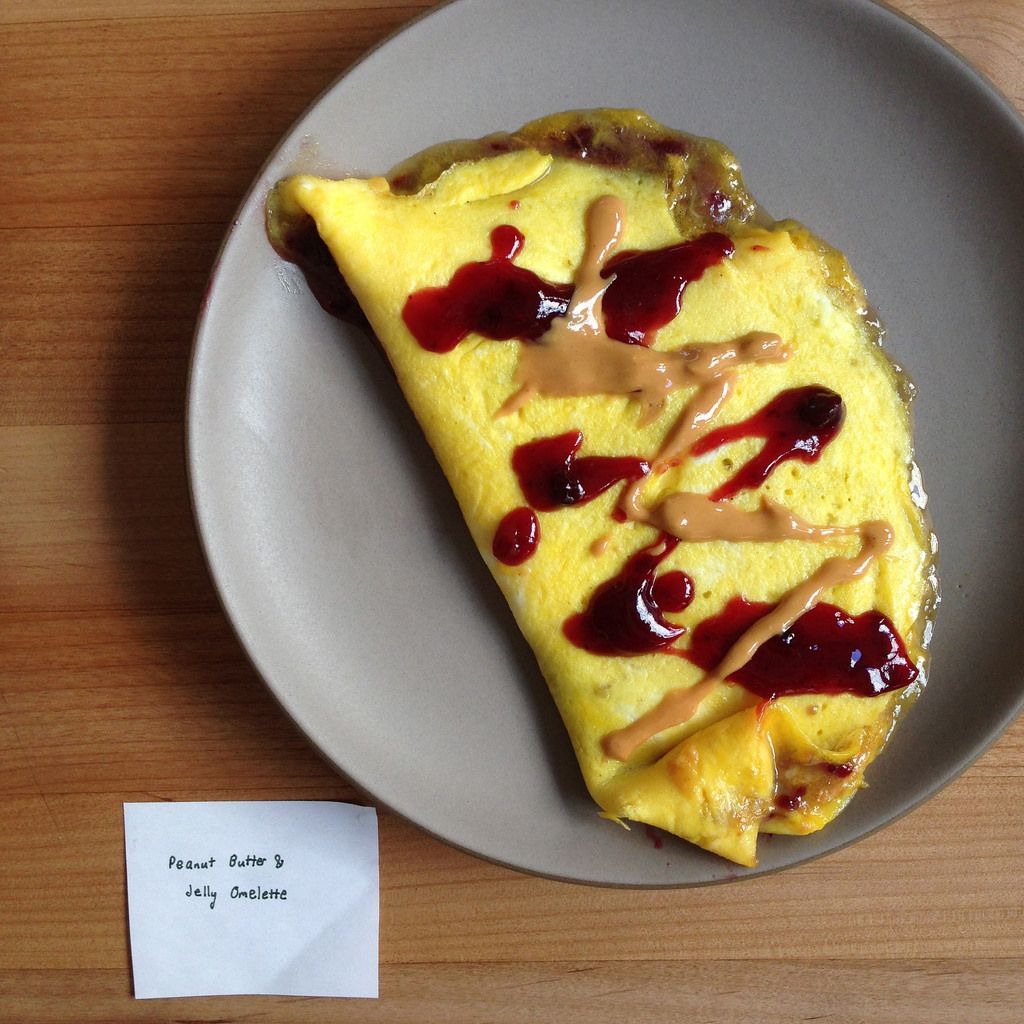 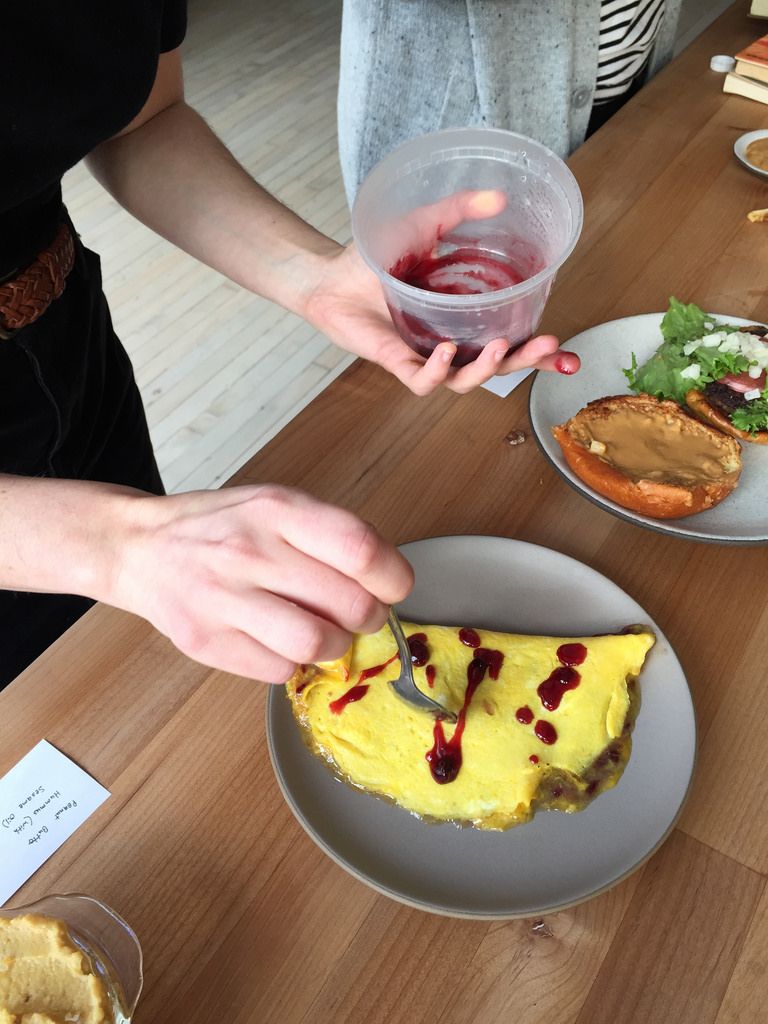 Peanut Butter and Jelly Omelette:
We wanted to like this omelette—which we recklessly both filled and drizzled with peanut butter and jelly—but we found its most redeeming quality to be its color: Green-hued eggs are a timeless party trick. It's true that we were to blame for the worst part of the omelette (that sludgy ooze)—it was undercooked. With a little more cooking time, however, we can almost imagine that this sweet omelette might taste kind of like an very eggy crêpe or blintz. 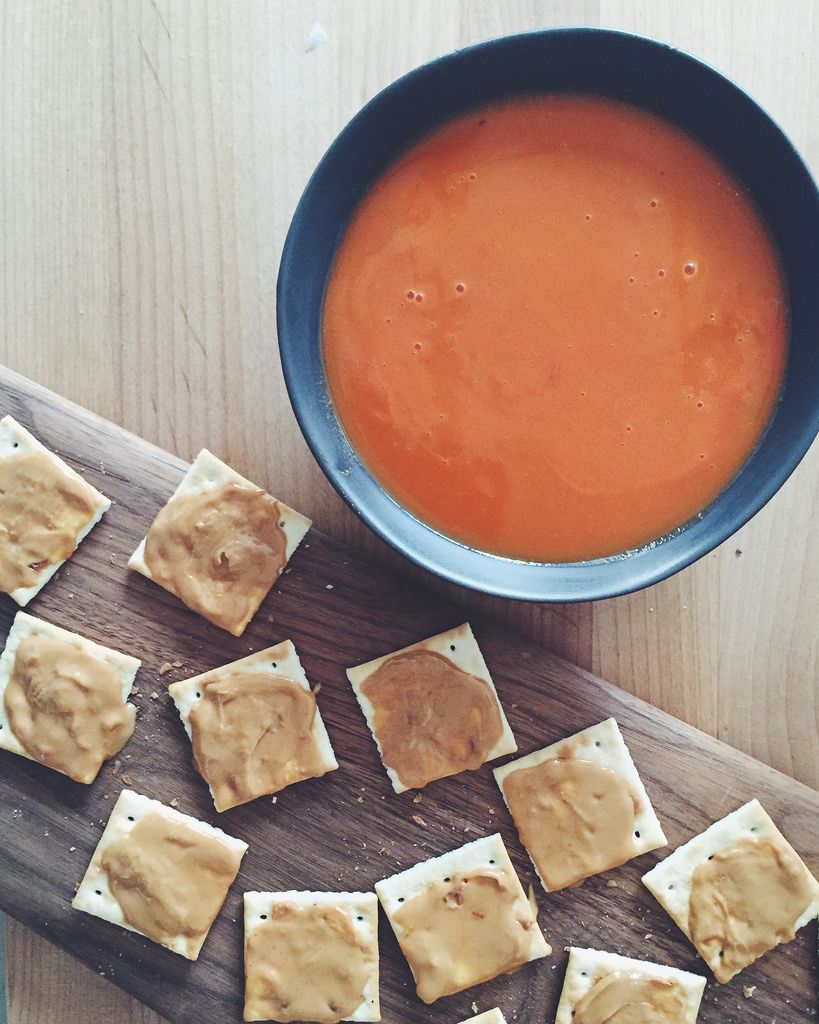 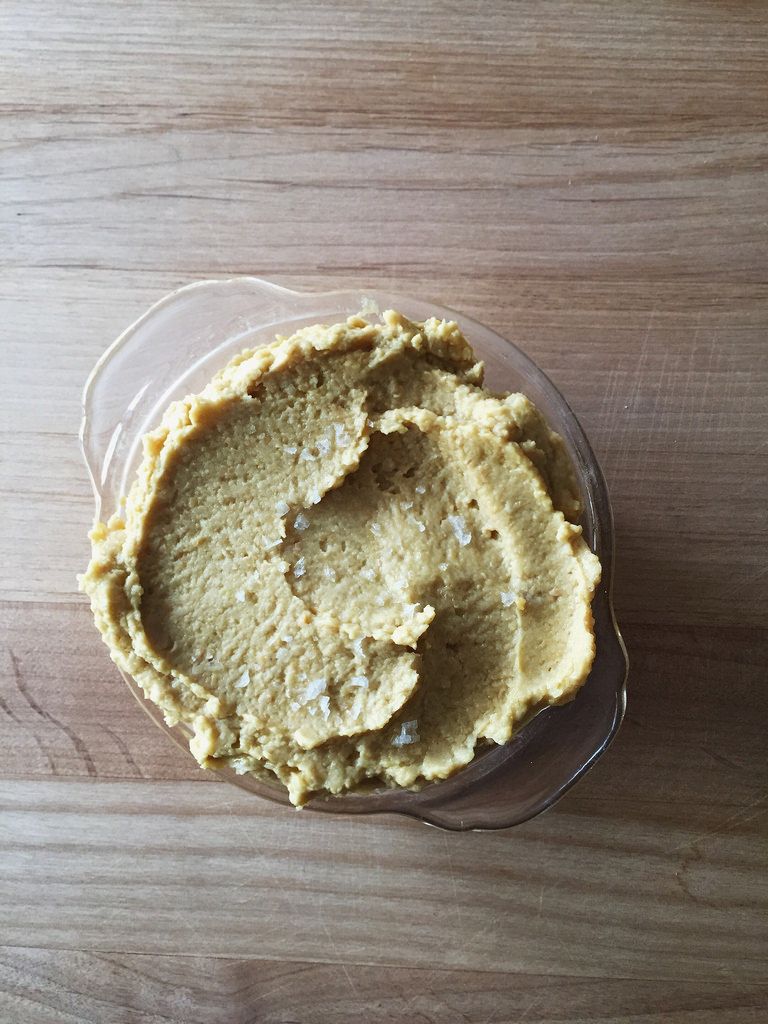 Peanut Butter on Saltines, Dipped in Tomato Soup:
While Food52 has positioned itself as a defender of mush, we have trouble getting behind slime, which is the preeminent texture of this combination. Luckily, once you get past the slippery layer of peanut butter slicked with red soup, you have a crunchy cracker coated in peanut butter. Why not skip the slippery soup and go straight for the crackers?

Peanut Butter Hummus:
To make this dip, we swapped in peanut butter for tahini and sesame oil for some of the olive oil. While the texture was satisfactory, the taste made us question everything we knew about hummus (and not in an enlightening way). It was too blandly sweet to substitute for classic hummus and we had a hard time thinking of foods it might actually pair well with. 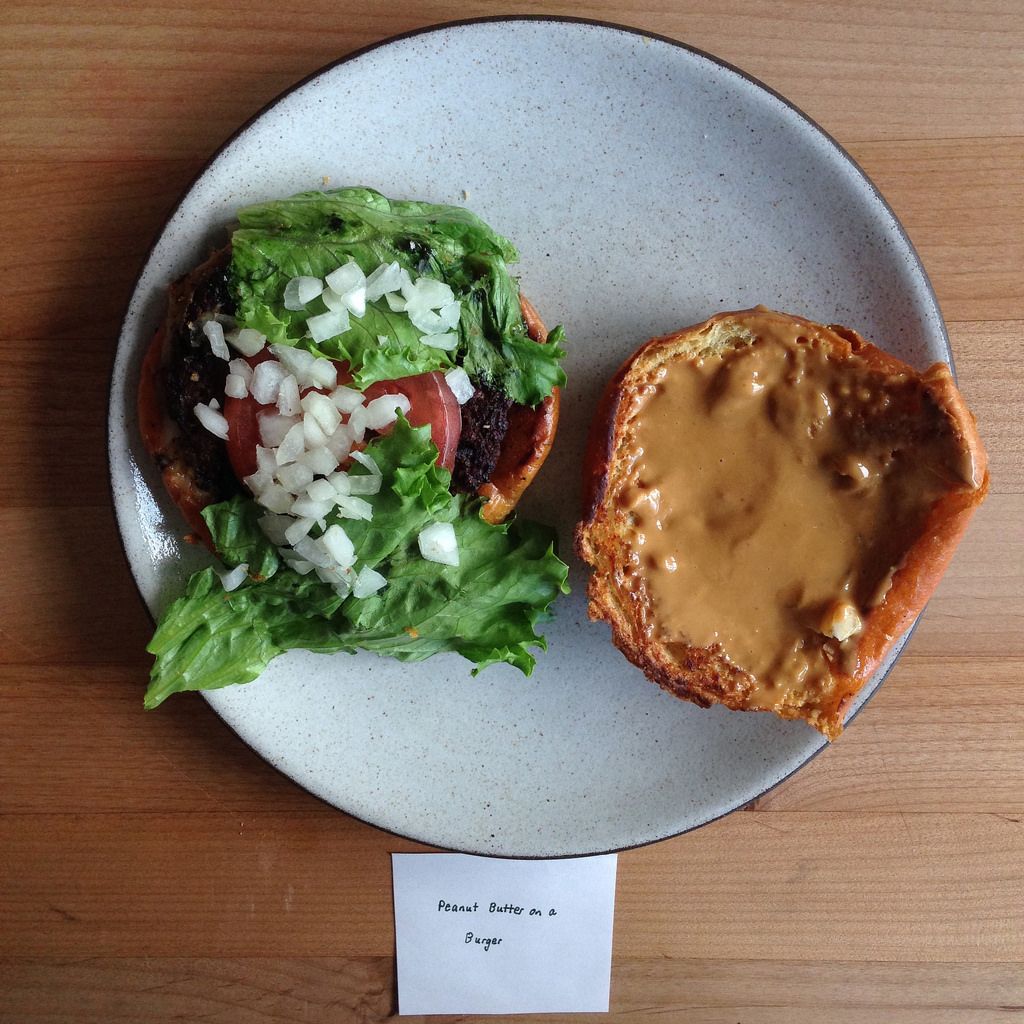 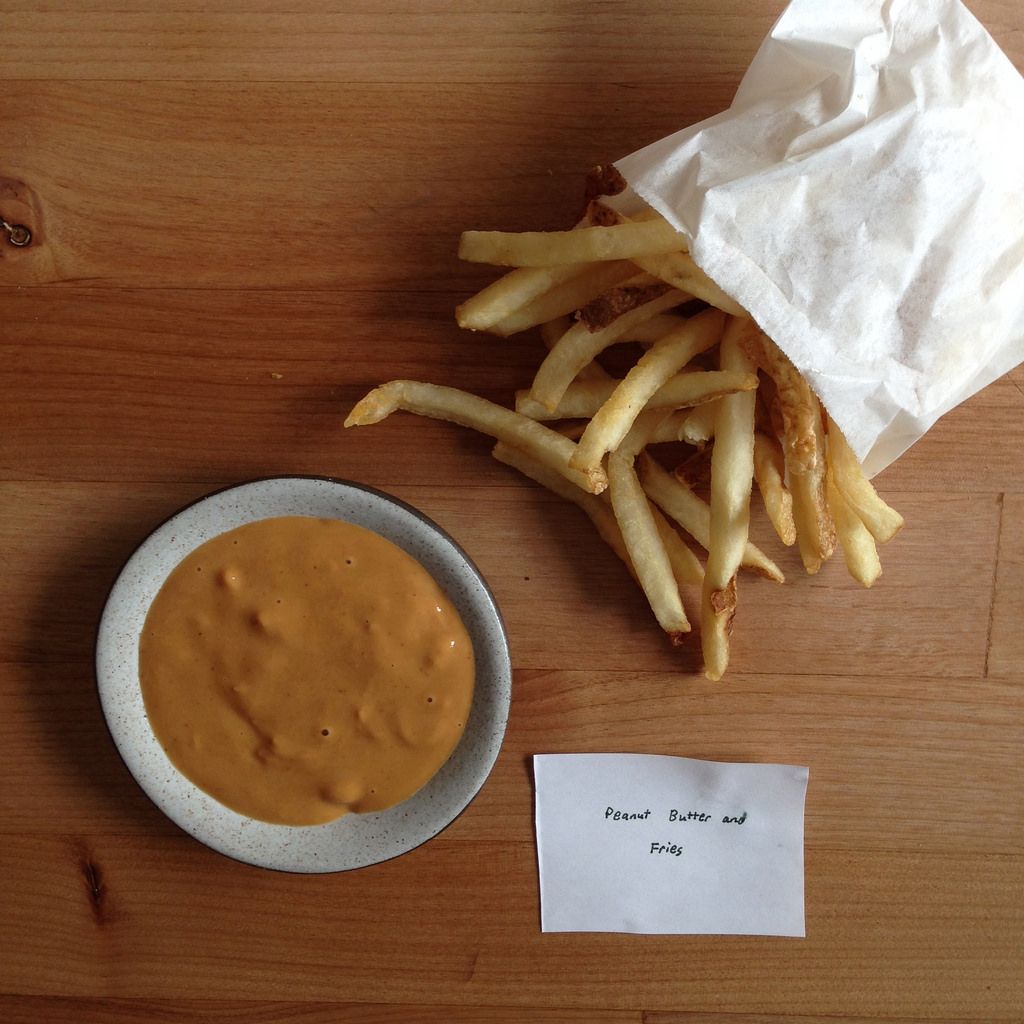 Peanut Butter on a Burger:
While some editors remarked that this burger was "legitimately good," others noted its problematic, hard-to-swallow consistency—the whole package needed crunch. Perhaps the solution is adding crispy bacon? 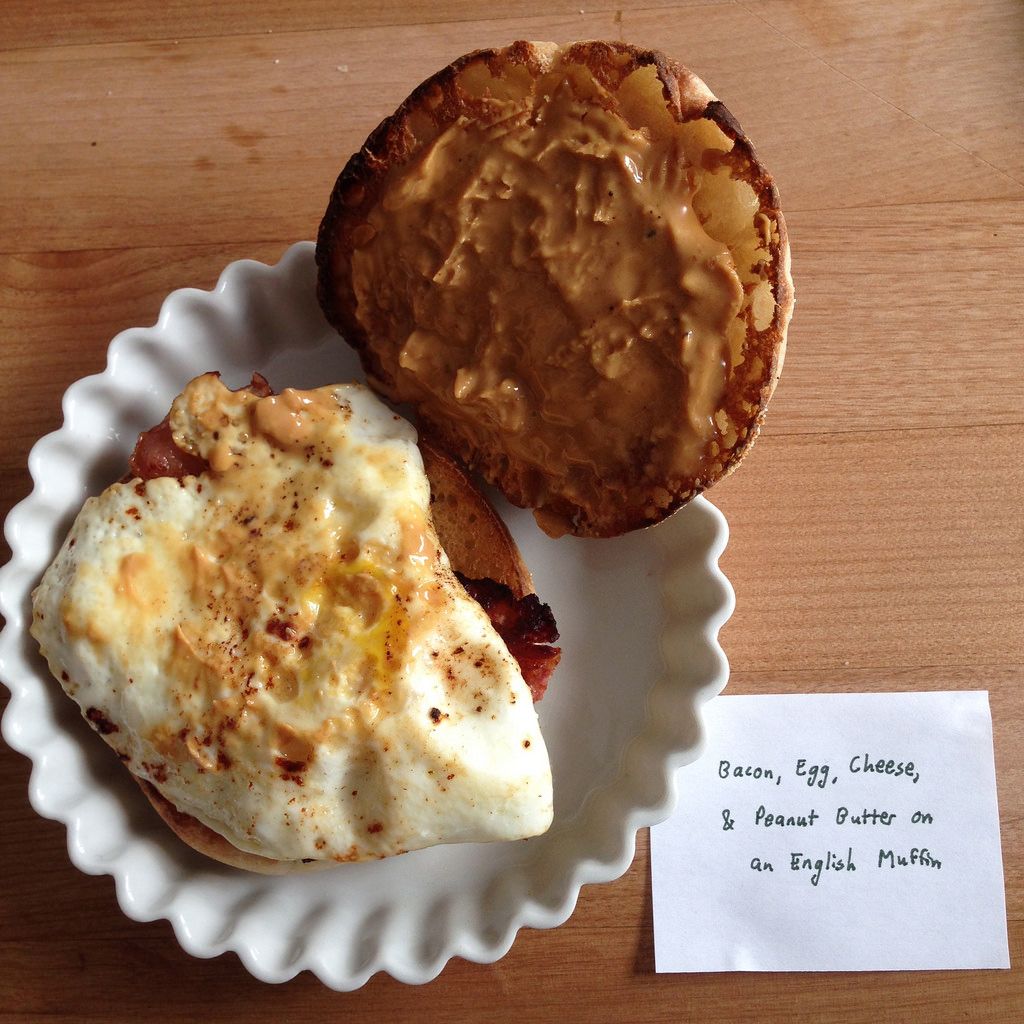 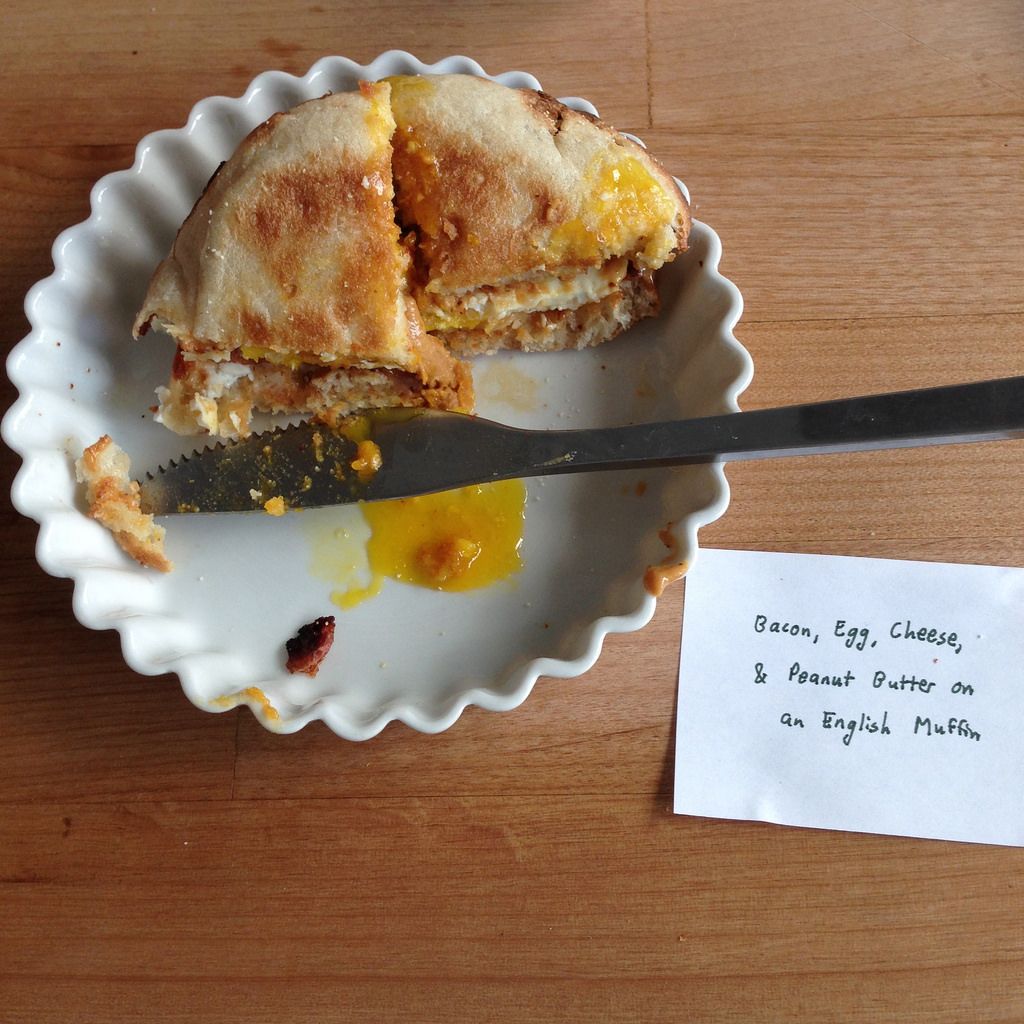 Bacon, Egg, Cheese, and Peanut Butter on an English Muffin:
This combination was enjoyable, yes, but were we surprised? This sandwich felt like a shoe-in. As one editor said, you could put shoe leather or a cricket (or both!) in a bacon, egg, and cheese, and it would taste good. We're not sure the peanut butter added much more than a thick layer of sweetness—we wouldn't be willing to switch out our normal breakfast order for this one.

Would (maybe) make at home: 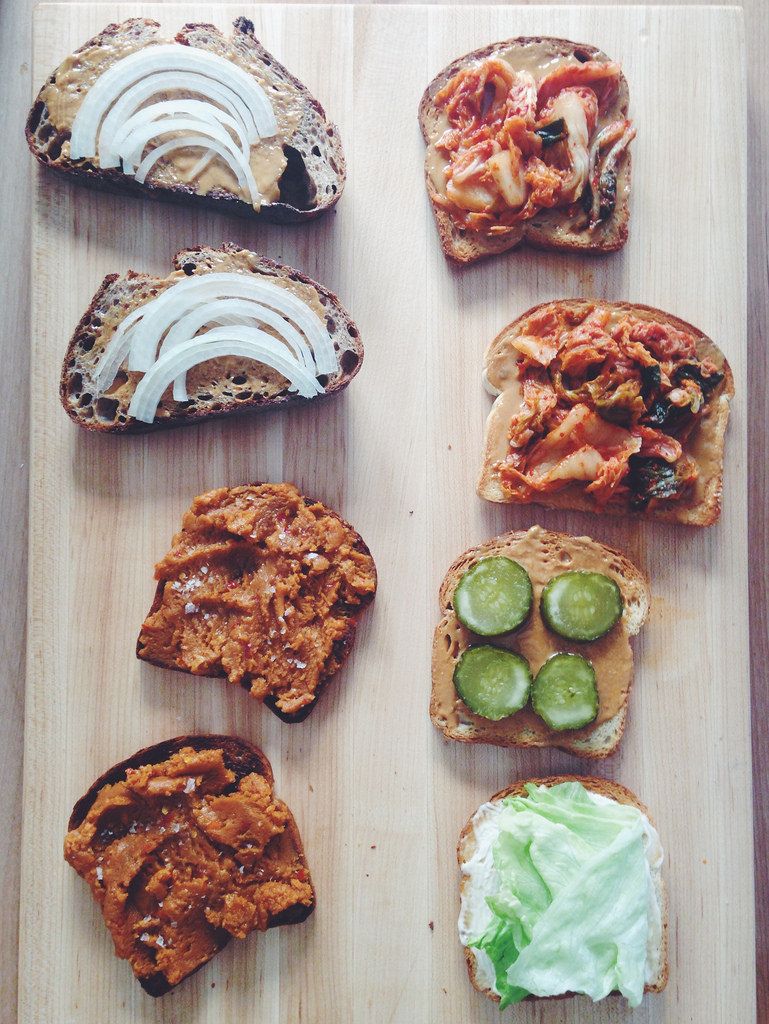 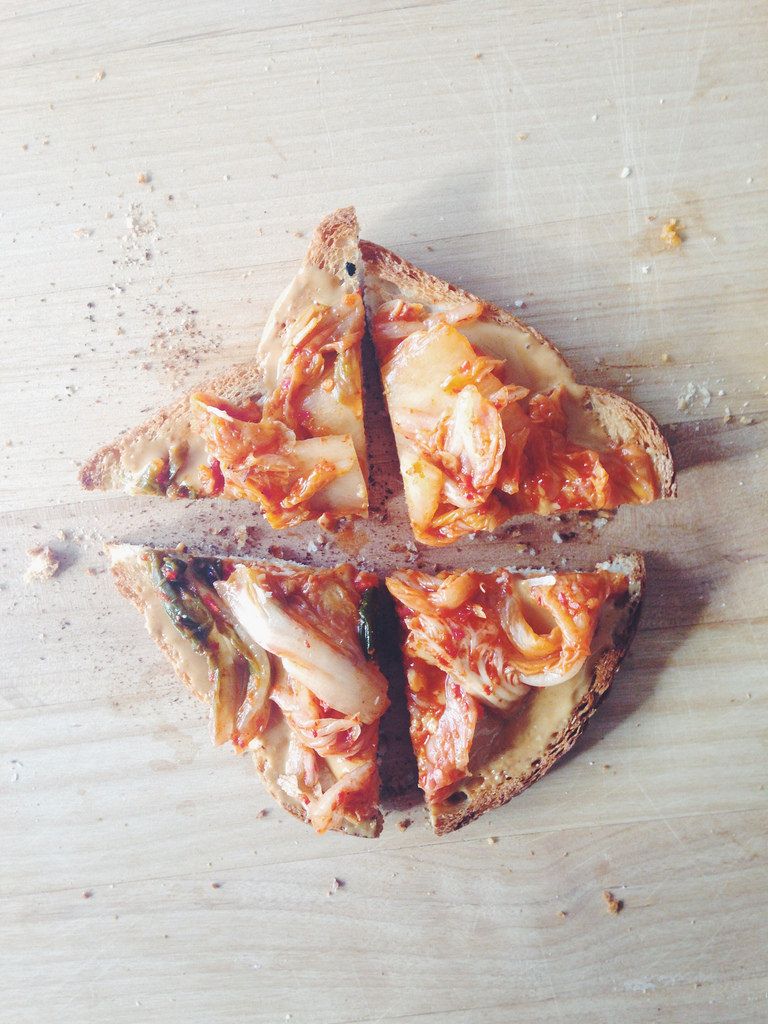 Peanut Butter and Sweet Onion Sandwich:
This sandwich sounded crazy, but one bite and we understood: The sweet peanut butter tames the sharp raw onion, which is crisp and pungent enough to cut the richness of the spread. It's our new favorite way to eat raw onion (and scare off possible suitors).

Peanut Butter and Hot Sauce Sandwich:
Finding no hot sauce in our refrigerator (the horror!), we made a homemade version using dried chile peppers. Her concoction was combined with the peanut butter to make a firey, addictive paste that got mashed onto toast. Once the burning sensation in our mouths died down, we were pleasantly reminded of a thick, textured version of a spicy Thai peanut sauce.

Peanut Butter, Mayonnaise, Pickle, and Iceberg Lettuce:
No one jumped to try this strange specimen. One editor closed her eyes (which was necessary), took a bite, and got real: "If I forget what i'm putting in my mouth, this might be the best one." We prefer a sandwich with dill pickle to one with bread and butter, as the sour pickles offset the mild spreads. Everything squishes together in the mouth so that the sandwich tastes like no one thing (though if we had to compare it to something, it might be most similar to a tuna salad sandwich).

Peanut Butter and Kimchi Sandwich:
Of all the combinations we tried, this one—due to the appearance and the strong, fermented smell—was the most initially horrifying. But, just like the raw onion, the vinegary, pungent kimchi did a good job holding its own against the oftentimes overpowering peanut butter. The peanut butter, in turn, neutralized the aggressive kimchi just the right amount. One staffer loved this sandwich so much that she even made her own version several days later. The following is proof: 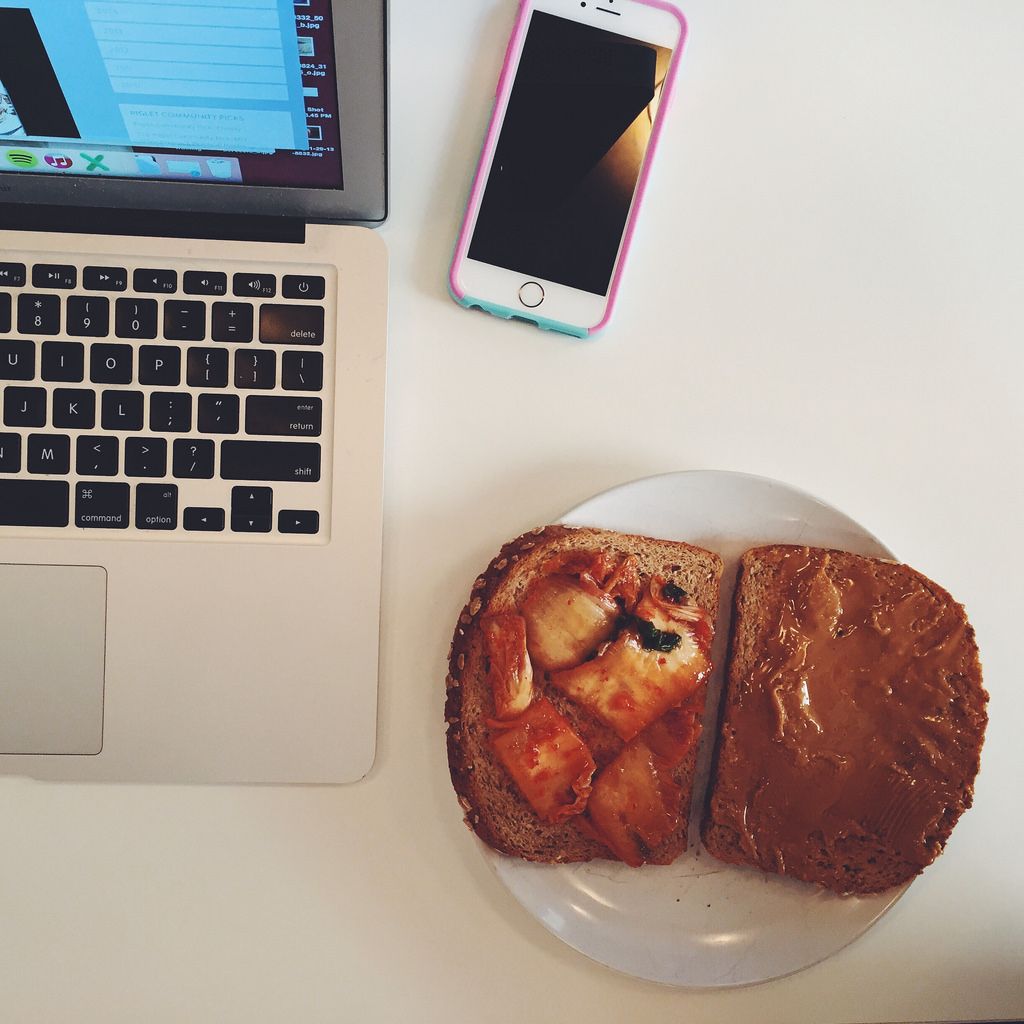 So what did we learn?

What weird combination should we try next? Tell us in the comments below!

This article was originally published in 2015.

mikedalena March 13, 2019
I must admit I’ve actually eaten peanubutter and kimchi on a saltine around midnight. It was good.

John G. March 5, 2019
Wanted to share my thoughts on peanut butter and how to use it. I have lived in Asia for 40 years- mostly Japan and Thailand. In Japan I became an addict to miso because of its umami properties, and not just to use in miso soup which the Japanese eat 3 times a day. I bought a book called "The Book of Miso" and it has been my food bible for the last 20-30 years. In the section on sauces, there was a sauce combining miso and peanut butter. I experimented with it and have used it my cooking ever since in different combinations. There are different kinds of miso, so can be used for different tastes- white miso is slightly sweeter and milder, brown miso is the normal miso used in soup, and dark red miso is stronger and used in stews and for frying with veggies. My basic sauce is simply an equal amount of peanut butter (I prefer chunky) and miso. I mix this into a paste and then add other ingredients depending on the recipe I will be making. I started off using this basic mixture on my breakfast cereal or oatmeal and added a bit of honey or maple syrup along with some sesame seeds and/or freshly made cream cheese (which I make myself from homemade yogurt/kefir). Now I use it as a staple sauce which I put in stews, soups, curries and just about anything that needs flavouring. In fact I use miso in place of salt in many instances. For stews and such, to the basic PB and miso I will add chili sauce, mustard, Worst. sauce, etc. Experimentation is the name of my cooking game so anything goes, tho have to be careful to not get carried away. Also, usually the mixture is put in at the end of cooking as miso loses its umami effects if cooked too long. So... please try this combo if you want to liven up your tastebuds and meals, as well as miso is so healthy for you.

Alyssa April 27, 2018
My mom had a roommate once who stirred peanut butter into her spaghetti...it always grossed my mom out, but I can see how the tomato/PB combo would be good.

mckenzie March 9, 2018
While experimenting to find a filling and easy-to-make vegetarian sandwich that wasn't grilled cheese, I created the following: unsweetened peanut butter, thick-cut sharp cheddar cheese, dill pickles, raw onion, mayonnaise, kettle chips and hot sauce on whole wheat. When I tell people about this sandwich they often recoil in mild disgust, but those who I can convince to actually try it are often converted. It is actually my favourite sandwich (though admittedly I like strong flavours more than the average person).

Nick March 6, 2018
Your problem and solution with the burger is pretty much what you said. You need to have the right toppings: Bacon, pickles, onions. No more no less. Well maybe some jalapeno jam.

marko P. November 8, 2017
the best ever recepie I an English muffin or whole wheat bread. spread peanut butter on one side. on the other spread mayo and add sliced banana to it. combine and enjoy a taste sensation.

midgeb September 29, 2017
Old favorite since childhood is the standard peanut butter, Miracle Whip, and banana slices. But since I no longer allow Miracle Whip in the house, I've graduated to hominess with peanut butter, dill pickle slices and chopped iceberg lettuce on whole wheat. Love the Stackers pickles for this because they are sandwich sized. Every bite has tart goodness.

cajoto58 September 28, 2017
...my husband has spoonful before most dinners,his favorite would be P&B,cheddar with mayo,my Mom told me about the iceberg lettuce on the P&B sandwich which I can handle,then she blew me away with her best combo...P&B with red 🍇 grapes lined end to end covering the sandwich then I added low-fat cream cheese to seal the deal!Quite refreshing on whole wheat or my favorite rye!No grapes today try raisins ,apple slices...bananas with cinnamon,even dates but don’t forget the cream cheese! And a good hunk of ginger grated into your P&B(Thai-style)makes any meal exotic!Yum!😎

Laurie H. September 12, 2017
I've eaten peanut butter and onion sandwiches as long as I can remember. Love em!. A slice of very crisp bacon is a nice addition to this sandwich.

Maggie September 14, 2017
My Mom was a fan of peanut butter and raw onion *swak!* Don't ask for any kisses!

Steven W. September 12, 2017
Gee, I didn't read all the comments but peanut butter and Fluff is a thing and it's a truly wonderful thing

Dan E. September 12, 2017
Peanut butter, bacon, and ketchup was a classic growing up.

Maggie September 14, 2017
This is an African flavour profile: tomato+peanuts feature in many stews!

fitzie September 12, 2017
Peanutbutter on rye bread with mayo, sweet pickle and iceburg lettuce if you have it. My uncle brought this home from WWII. I was shocked when he made one and after tasting it, he had to make another because I ate most of his.

Ann W. September 12, 2017
My father in law ate peanut butter in or on almost every thing, including stirring it into his coffee!

Mariù September 12, 2017
It seems no one has mentioned it yet, so I'll go for it: marmite and peanut butter on (preferably sourdough) toasted rye bread for breakfast or as a snack. By chance I also discovered the weird tastiness of mayo and pb and that I could eat it by the spoonful, so I never keep mayo at home.

Maggie September 14, 2017
I see absolutely nothing wrong with eating PB+mayo off a spoon