How to Make Baklava at Home

Today: Shelly West of Vegetarian 'Ventures shows us how to make baklava, the delightful Mediterranean dessert, at home. 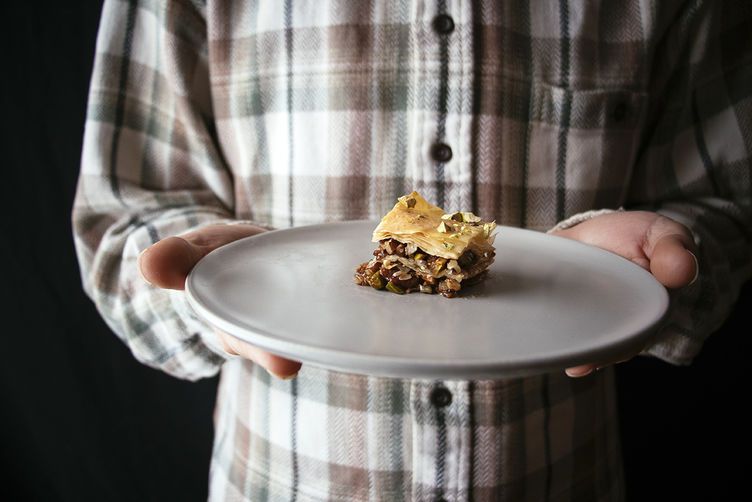 Baklava is one of those desserts that intimidated me for years. Growing up, my family would always order it after a big meal at our favorite Turkish joint, but I never felt confident making it myself. I was certain I wouldn't be able to replicate its intensely sweet flavor at home (in the same way that those amazing curries I devour at Indian restaurants turn out slightly flatter when made at home.)

I finally decided to try to make baklava when my friend requested it for her birthday. I was pleasantly surprised not only at how simple it was to whip up, but also how that deep honey flavor could easily be achieved by letting the dish absorb the flavors overnight. Before long, I became obsessed with homemade baklava and began making it for all sorts of occasions. 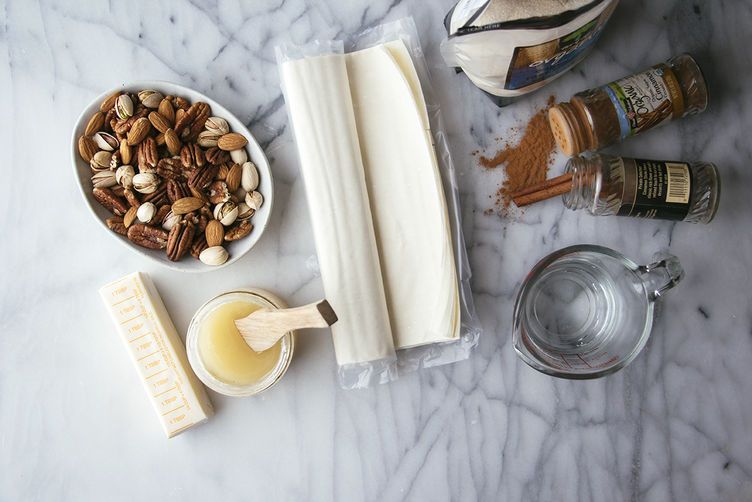 After serving it at several parties, I discovered I wasn't the first to be intimidated by baklava, as people started asking, "How did you get this so flavorful?" The secret—letting it sit overnight (which isn't really a secret at all) felt almost embarrassingly simple to share. Now it's your turn to impress all of your friends with your worldly skills and propensity for Mediterranean cuisine: 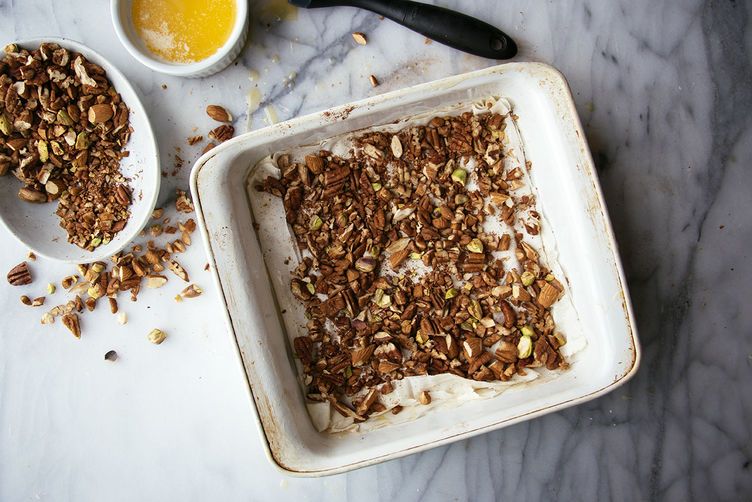 Remember that you'll want to make the baklava a day before you want to serve it so that the flavors can be absorbed into the phyllo overnight. Also, make sure you keep your phyllo covered under a damp cloth when you are not using it, or else the sheets will stick together. 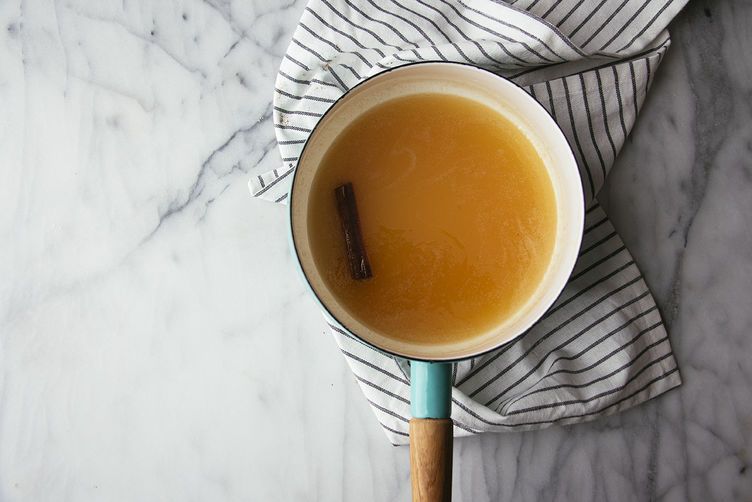 First, prepare your mixed nuts and the baking dish: In a small bowl, toss together the nuts and cinnamon and set aside. Butter a 9- x 9-inch baking dish and preheat the oven to 375º F. Set aside a small bowl of 3 tablespoons of the melted butter, then remove your phyllo from the package and wrap it in a clean, damp kitchen towel (only remove the sheets you are immediately working with in order to avoid drying out the phyllo).

Next, layer the phyllo pieces with the crushed nuts. Remove two sheets of dough from under the cloth and use a pastry brush to brush one of the sheets with melted butter. Place the unbuttered sheet into the square dish, layered with the buttered piece butter side-down (cut any excess that doesn't fit just right into the dish).

Repeat two more times until you have 6 layers of phyllo dough, alternating between pieces brushed with melted butter and plain pieces. 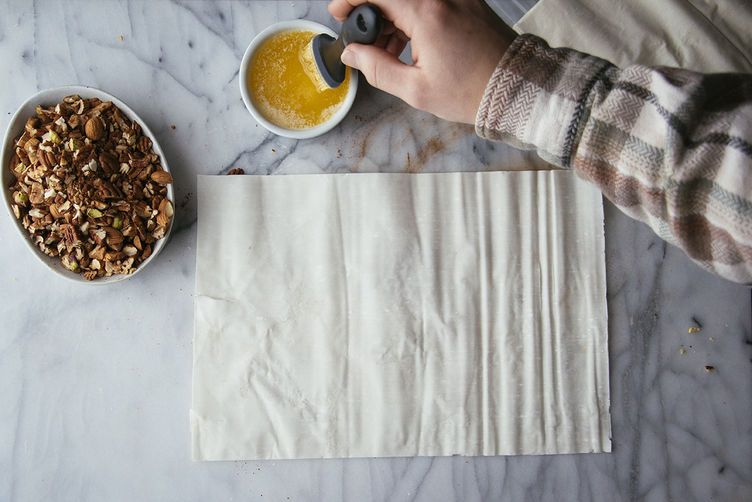 Spread 1/3 of the nuts over the phyllo dough to create the first nut layer. Repeating the same technique from above, layer another set of 6 phyllo sheets, alternating between buttered and plain sheets, for a total of four times so that you have 24 sheets of phyloo total (4 layers of 6).

Cut a diagonal diamond pattern through the baklava with a very sharp knife to make single servings, as shown in the picture below. There should be about 3 to 4 cuts from each side of the baking sheet, going across diagonally. Bake for 35 to 40 minutes, or until the top is golden brown. 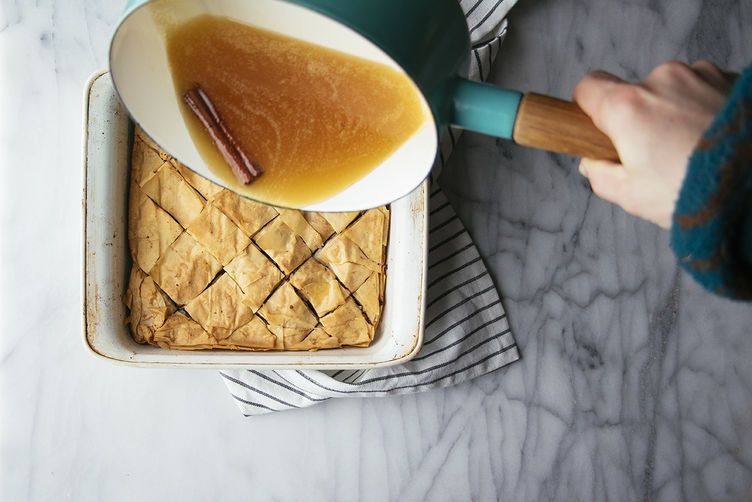 While the baklava is baking, combine the remaining 3 tablespoons of butter with the honey, cinnamon stick (if using), vanilla, sugar, and water in a saucepan. Bring to a boil and then reduce heat to low and cook, covered, for 5 minutes. Remove from heat and let the cinnamon stick steep until the baklava is finished baking.

Once the baklava is finished baking, remove the cinnamon stick from the syrup and drizzle the golden liquid over the baklava. Let it sit to cool for several hours or, ideally, overnight. 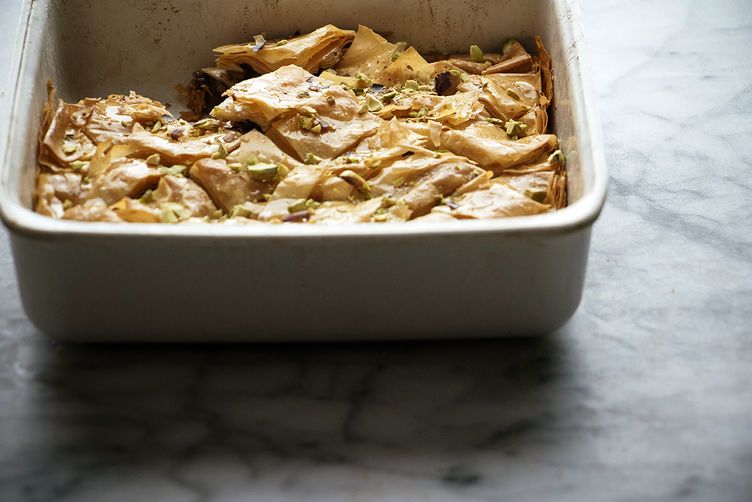