The Genius Secret Ingredient to Save Your Vinaigrettes

Today: How to cheat just a little to get perfectly emulsified, creamy vinaigrette—without cream or mayo or magic. 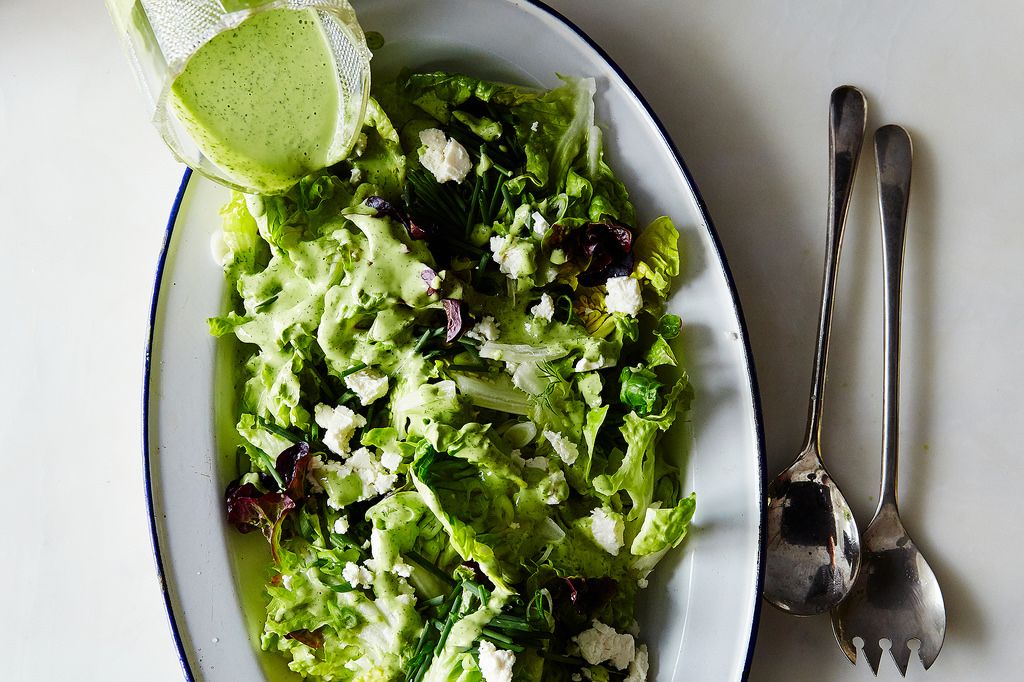 This continuum isn't a straight line, but a rainbow or a parabola, with every movement away from the endpoints an improvement of experience. Start climbing up from the oil and vinegar side and you'll see a classic vinaigrette—oil whisked into vinegar, with a little mustard to hold it together. Caesar surely comes next. By the time you tumble down to the other side, you've passed Green Goddess and Thousand Island and most of the salad bar at Sizzler. 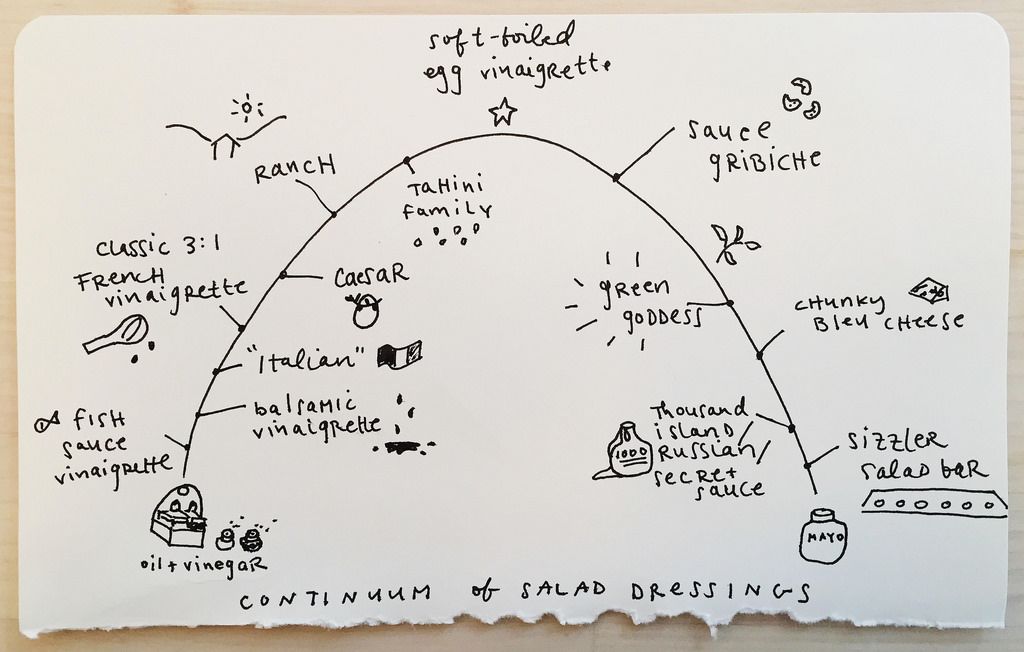 Right at the pinnacle, I would argue, is this genius vinaigrette from Chef Eric Korsh of North End Grill. It's as bright as any standard vinaigrette, but more voluptuous; as smooth as ranch or blue cheese, but more sprightly and refined, and very unlikely to weigh down your lettuce (or your mouth). 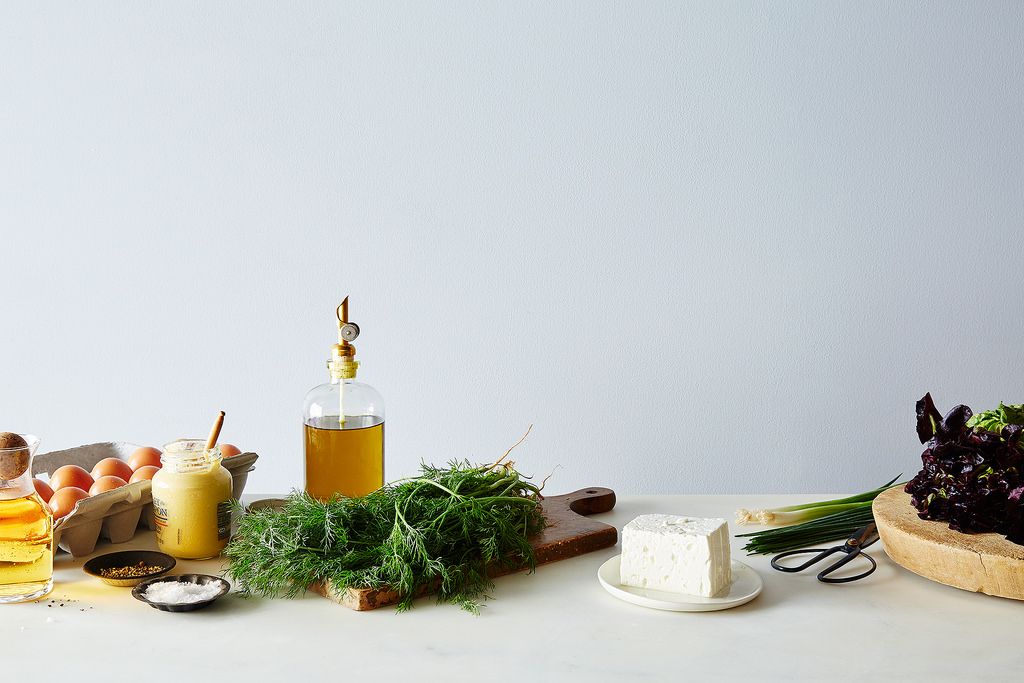 Korsh settled on his method (which I'll get to in a moment) after feeling unsatisfied trying to work hand-chopped fresh herbs into a dressing for baby Sweet Gem lettuces. "It wasn't doing it for me." Korsh told me. "There's the standard 3-to-1 vinaigrette, which I love—it's an ideal from a flavor profile standpoint. But it usually breaks out on the lettuce." 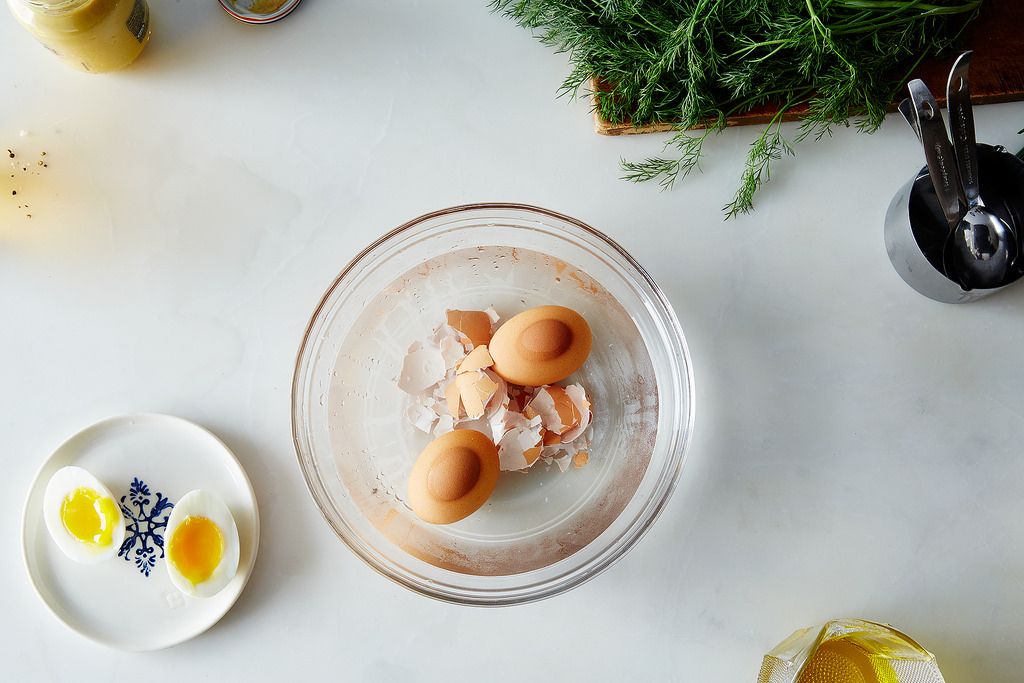 To help the emulsification hold—and give the dressing more viscosity and richness, without adding any dairy—he plunked a soft-boiled egg into the blender, too. The egg was just cooked enough to firm up a little (and put aside nagging raw egg concerns), but not so much that it left any discernible cooked bits. Instead, the dressing was bracing but perfectly creamy and smooth. 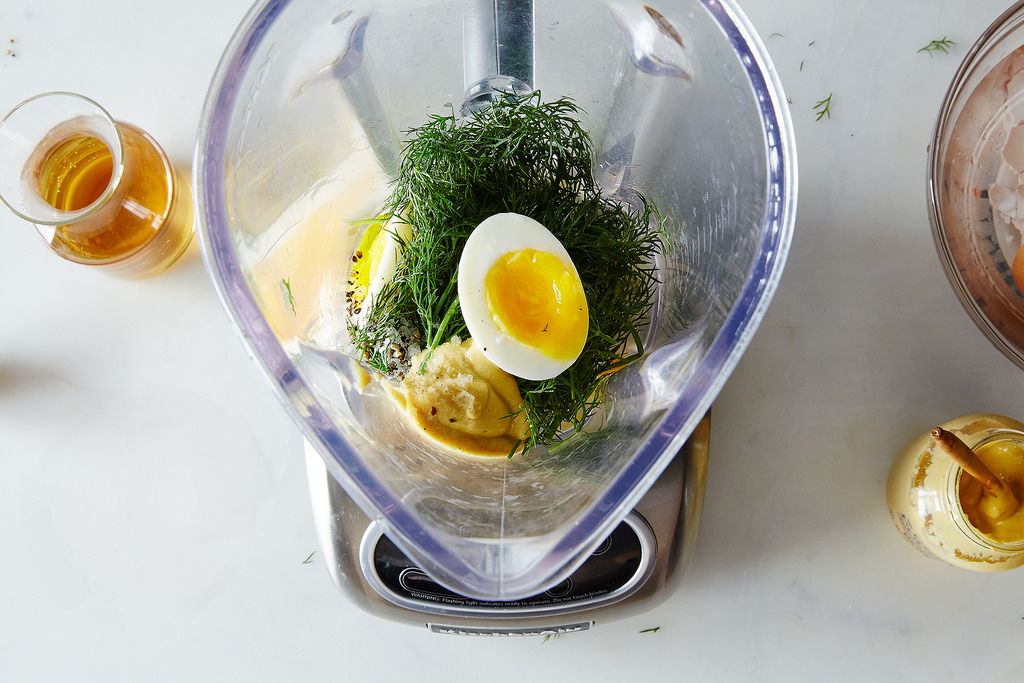 After boiling the egg, all that's left is to tear up some dill so there aren't any scraggly pieces, and measure a few sundries directly into your blender, which will handle the rest. The partially cooked egg is so effective at emulsifying that you can keep the dressing in the fridge for several days without it separating. (Korsh credits powerful modern blenders, but you don't need a Vitamix—I've made this in various decidedly lower-end models.) 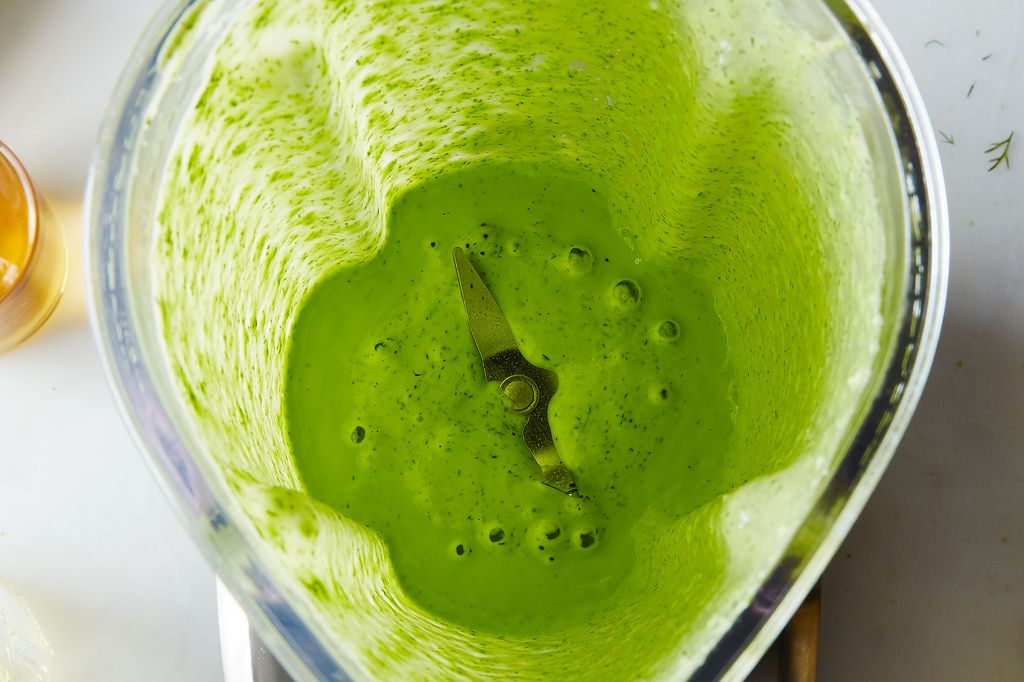 This version of the salad calls for farm lettuces, sheep's milk feta, scallions, and chives, and needs nothing else. It has followed Korsh for the past six years, through three restaurants. But he's also done variations of the dressing with other herbs like chervil or chives, and on other salads like barely-cooked Ruby Red shrimp and raw celery root.

This template would also make for an excellent potato salad, chicken salad, or wedge—anywhere that you might think you need to involve a thick, mayo-based dressing, but would rather not this time. Egg salads or salads with more soft-boiled eggs plunked on top—far from being overkill—might be the best ideas of all. 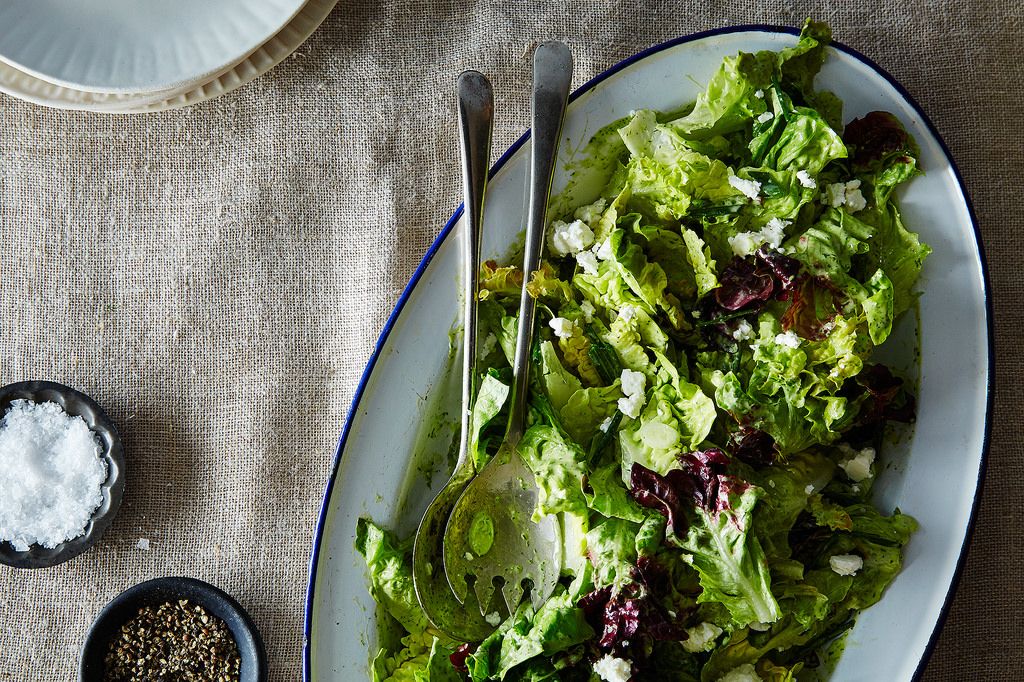 For the dill vinaigrette:

For the farm lettuces salad:

See the full recipe (and to save and print it) here.

Barb March 17, 2016
Hey, tamater sammich, the ad was chosen by your own browsing history, you went there, they took note and bought ad space here.

tamater S. March 21, 2016
Oh, well ok, something good came out of it then. Thanks for letting me know. Maybe I shouldn't have flown off the handle so fast. But heck, it's my busiest time of year, and I'm sore all over. That's my grumpy story and I'm stickin' to it. :-)

tamater S. March 3, 2016
I clicked on the Sizzler link above, thinking it would lead me to a Sizzler house salad dressing recipe; what I got was a schmaltzy, crappy 80's commercial. This, Food52, is an abuse of your members. Keep wasting my time like this, and you'll have one less member on your rolls.

Sharon July 12, 2015
You can accomplish the exact same thing by adding a teaspoon or so of mayo, which is just egg & oil in the first place. So what's the point of dirtying a pot and waiting for an egg to boil? Just doesn't make sense. Actually, mustard is the master emulsifier. Add a little mayo to super stabilize it. And why add a blender to your dish washing tasks? Just shake the whole thing up in a jar. Want a fantastic tip? You know when you're at the bottom of the mayo jar and there's a little left at the bottom and clinging to the sides ? Just make your vinaigrette directly in that jar and shake it up. It keeps in the fridge forever. The making of a good vinaigrette is not an afternoon's task. They were being made long before food processors or blenders came into existence. There's no need to re-invent the wheel.

kantcould July 26, 2015
My sentiments precisely. I keep a squeeze bottle of Maille Dijonnaise on hand for this purpose -- just the right proportion of mayo and moutarde.

reen July 12, 2015
I'm a novice to all this but my first thought when I began reading your article was adding some avocado. I would think it would emulsify and aid with the creaminess while avoiding the extra step of having to cook an egg...the only draw back here could be in it changing color, however, with the vinegar it may just work out...or am I basically describing a dressing that's already out there?

tamater S. March 3, 2016
Although I lambasted your link to a Sizzler commercial above, on the positive side, I want to say that I too, very much like the drawing, which is instructive as well as adorable.

Millie |. July 9, 2015
This sounds wonderful and so easy! I also love adding tofu or cashews to my dressing to make them creamy!

S July 8, 2015
Mayonnaise is egg yolk and oil, so this recipe is essentially duplicating that ingredient, just processing it a different way, that's all.

An excellent non-dairy emulsifier for vinaigrette is mustard.

Natalie July 9, 2015
Yes but mayo also has a lot of other ingredients you don't think of and that aren't so great for you. This is much healthier!

S July 9, 2015
That's only if you buy the cheapest, nastiest commercial versions. There are better alternatives.

Of course, one is making your own.

S July 9, 2015
The point here is that egg yolk is not a "genius secret ingredient." It's a component of mayonnaise and the active emulsifying agent when mayo is added to a vinaigrette.

Rather than using prepared mayonnaise, the author is simply adding the egg yolk to her oil.

Remember that egg yolk has been known for centuries as an emulsifier and is a primary ingredient of two classic basic sauces: hollandaise and mayonnaise. Preparations like sauce gribiche are just a modification of mayo. Same with the classic Caesar salad dressing.

Throwing in an egg yolk to emulsify a vinaigrette is no secret.

If you collected all the cookbooks with vinaigrette recipes that include egg yolks, you would sink ten aircraft carriers.

Kristen M. July 9, 2015
Seany, the cooked whole egg is the part I find novel and exciting. The fact that the firm egg white blends in so well and makes it creamy without adding more oil or any dairy, plus the fact that this means you're not worrying about raw eggs, make it very different from making mayo, or adding prepared mayo to dressings, in my opinion.

S July 9, 2015
Well, I was primarily commenting about the emulsification. Sauce gribiche is just one of many often made with whole cooked eggs.

Here's one from Epicurious: http://www.epicurious.com/recipes/food/views/sauce-gribiche-355170

Sherry I. July 27, 2015
Not if you make your own mayo! It's super simple. Go to YouTube and search for FoodLab's mayo video.

jbban July 8, 2015
This looks pretty similar to sauce gribiche from the Zuni Cafe cookbook. That one is pretty genius and makes excellent potato salad! Looking forward to trying this version!

Kristen M. July 8, 2015
Yes! I think of sauce gribiche as chunkier than this—I drew the continuum that I had in my mind and added it to the post. See if you agree!

Alexandra S. July 9, 2015
Jbban and Kristen — so funny, I just discovered the Zuni Cafe 4-minute sauce gribiche and tried it with potato salad over the July Fourth weekend — so good. This dressing looks so summery — just got a bunch of dill in my CSA. Can't wait to try it!

PS: I think you and Sarah Jampel missed your callings — your sketches are frame worthy!