Get cozy with coconut.

Good things come in tin cans. Case in point: sardines, whole tomatoes, beans galore—and coconut milk. We've said it before and we'll say it again: Coconut milk is one sexy, dreamy canned good. It's sweet but not cloyingly so, rich but not heavy. It's cheap! It adds depth to the savory and the sweet, from soup to sweet potatoes to cake. Its creamy, dairy-like qualities make it a vegan's best friend—and it can be your best friend, too.

Here are 25 ways to make friends with coconut milk: Creamy coffee without the, well, cream. Start your morning with a one-two punch of coconut (milk, water), and richness (chocolate syrup and avocado–don’t knock it!). 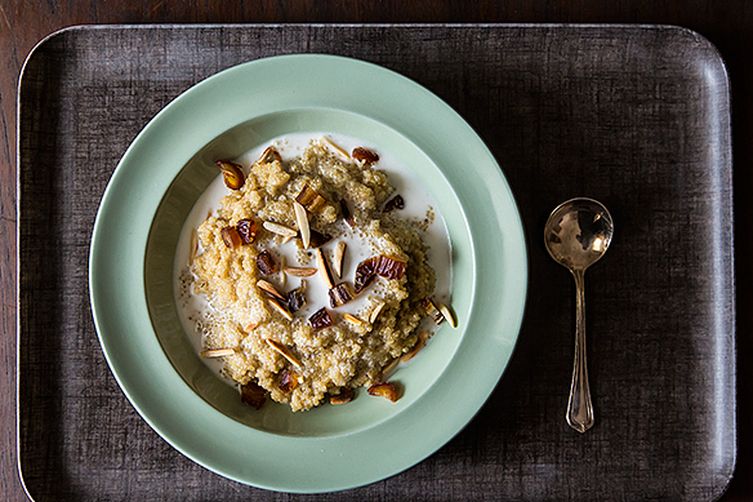 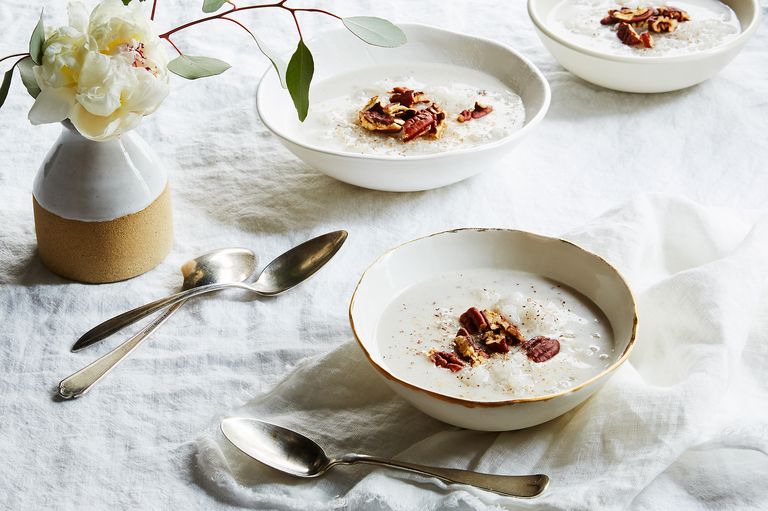 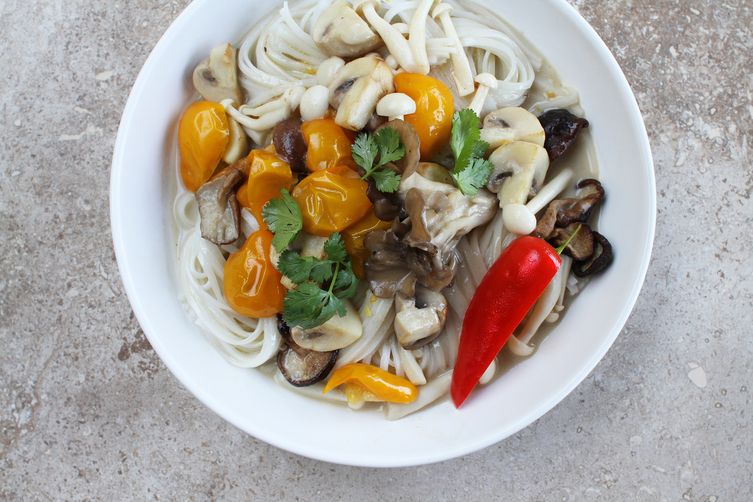 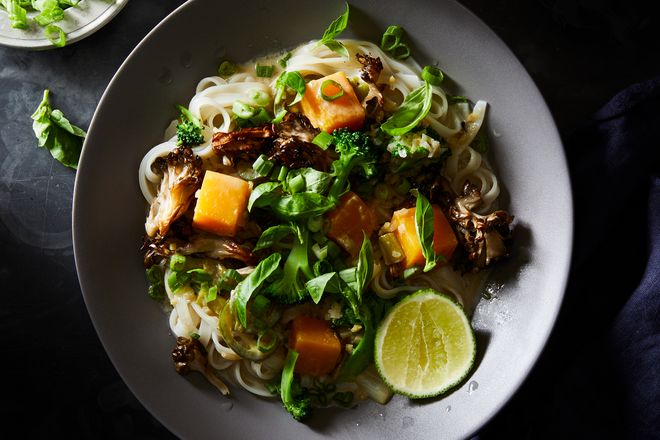 This coconut curry is full of the goods: shallots, scallions, butternut squash, broccoli, and more. Serve it over rice or noodles, and eat in oversized pj's. 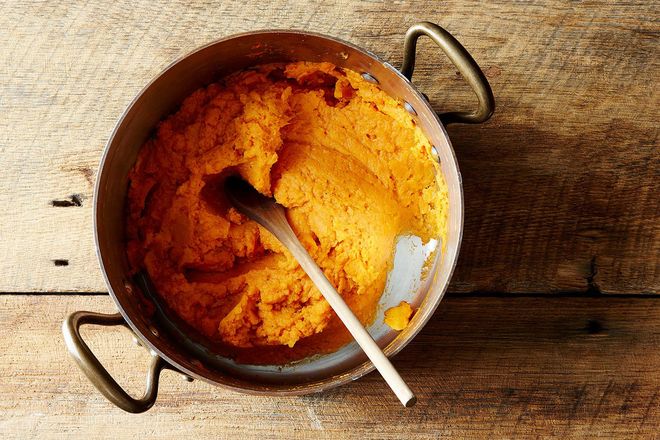 Just when you thought the sweet potato couldn't get any creamier. 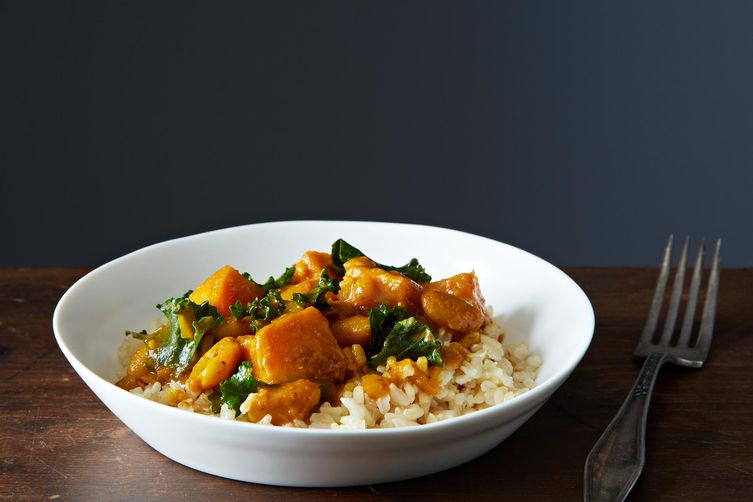 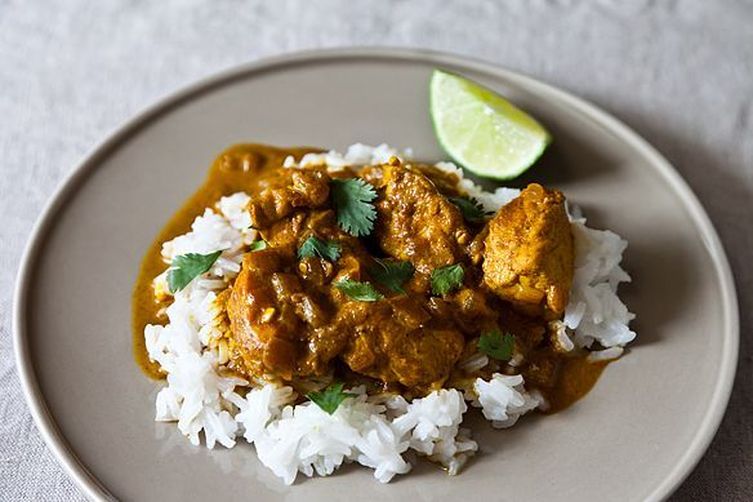 Weeknight got you down? Coconut chicken curry to the rescue! More people need to know about this (very weeknight and every protein–friendly) Lao-style marinade. 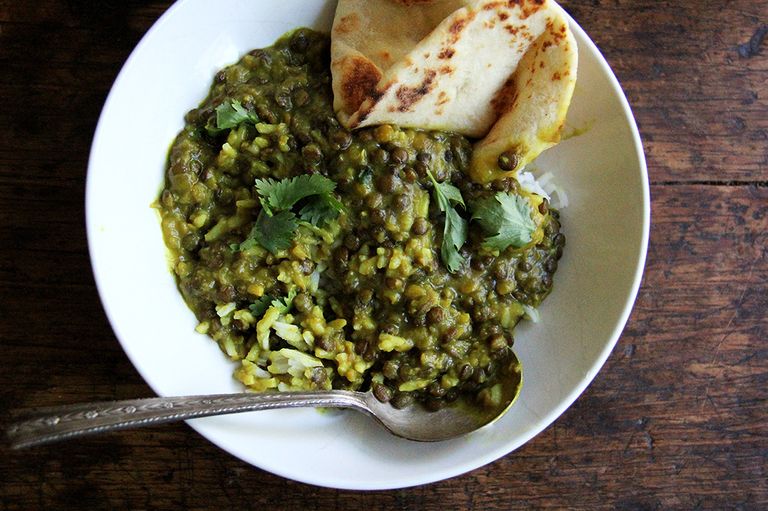 These coconutty lentils are from Julia Turshen's*Small Victories*. In the words of Alexandra Stafford, "These lentils come together in about 30 minutes, are deeply satisfying, and could be vegan if you leave out the yogurt." 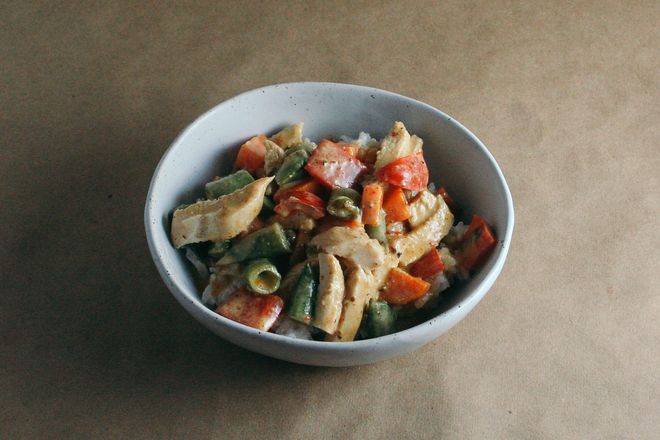 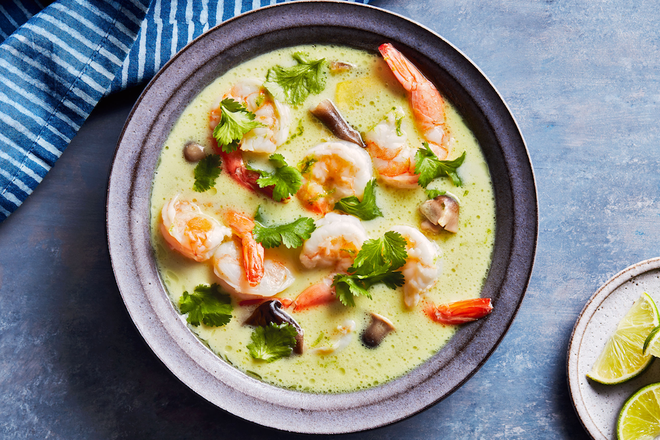 This tom kha calls in shrimp, lime juice, and lemongrass for an extra-savory coconut milk soup. 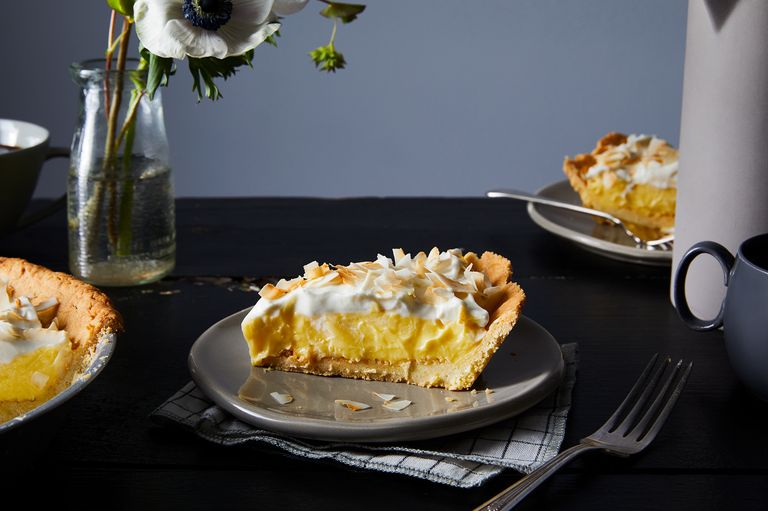 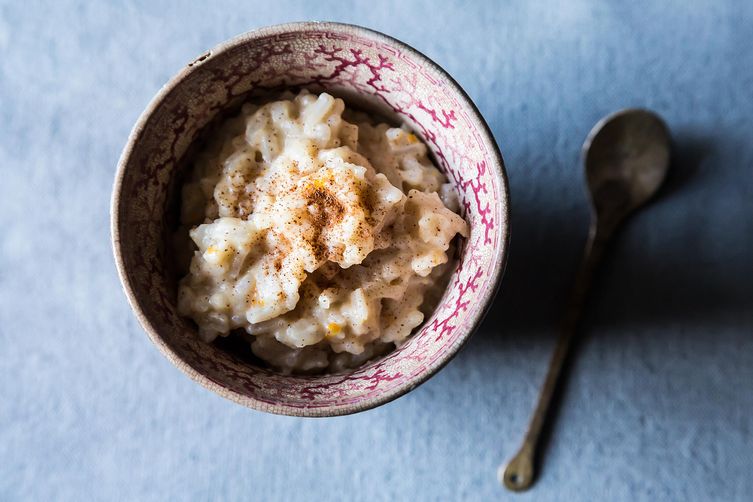 This cozy coconut rice pudding is just as happy to be your snack, or your dessert. (Or, you know, your breakfast.) 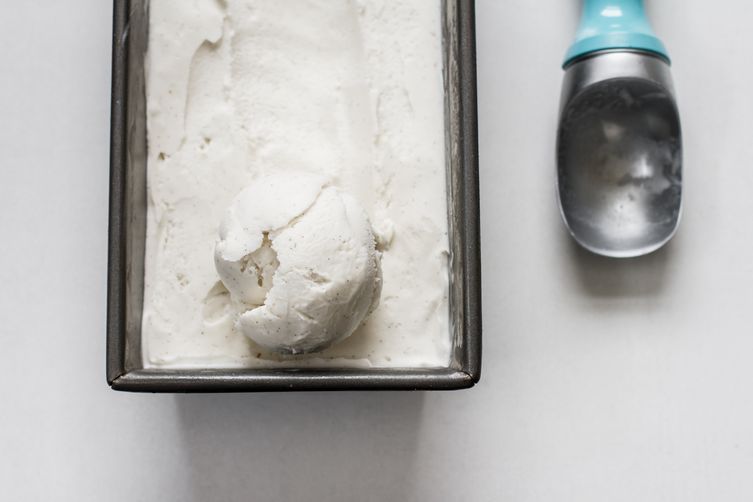 A dairy-free, vegan ice cream with the texture of velvet sounds, well, impossible—that's where the magic comes in. 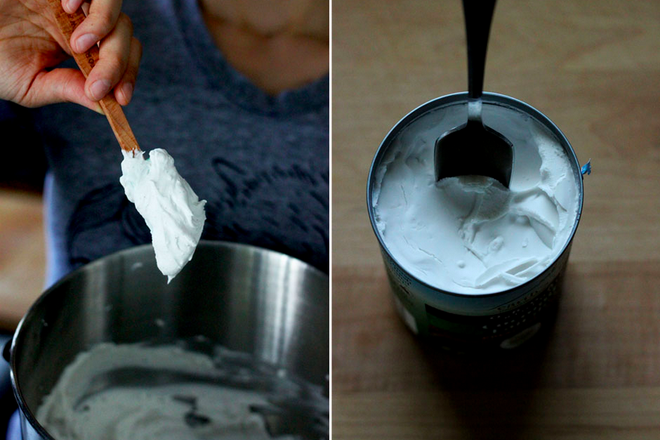 Coconut cream, whipped into a cloud-like topping. Use it to make freshly sliced berries or warm slices of cake extra special—or simply eat it from a spoon. 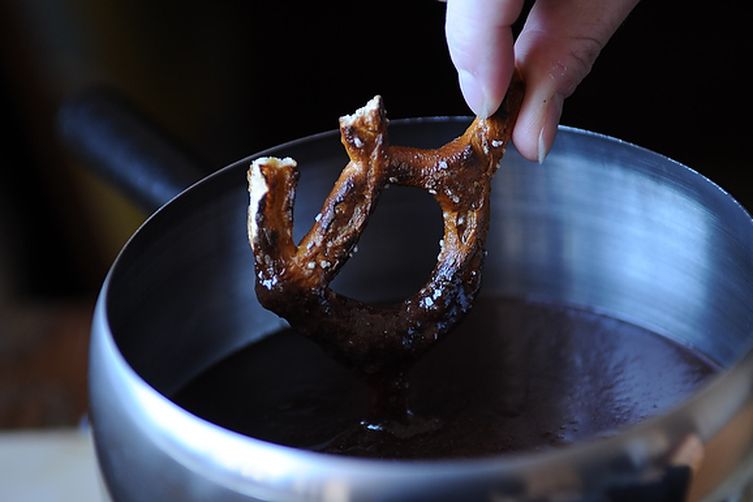 This fondue made with chocolate and cajeta is almost custard-like, thanks to coconut milk. 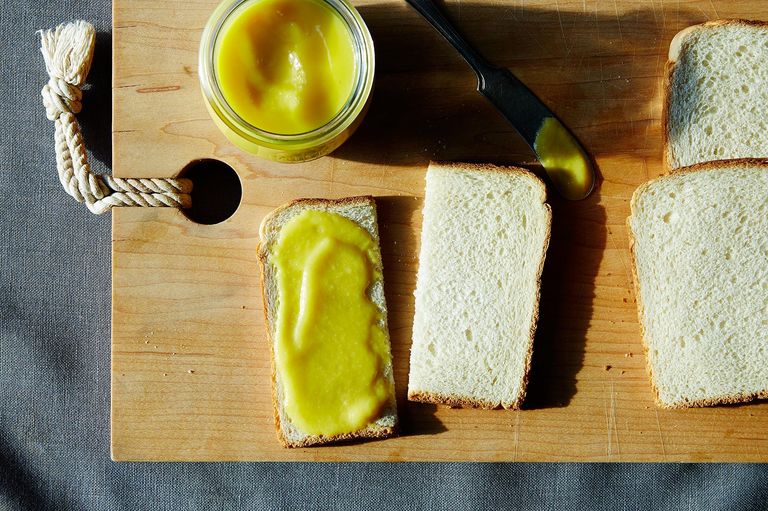 Coconut milk gets cooked down into a custardy, caramelly jam. 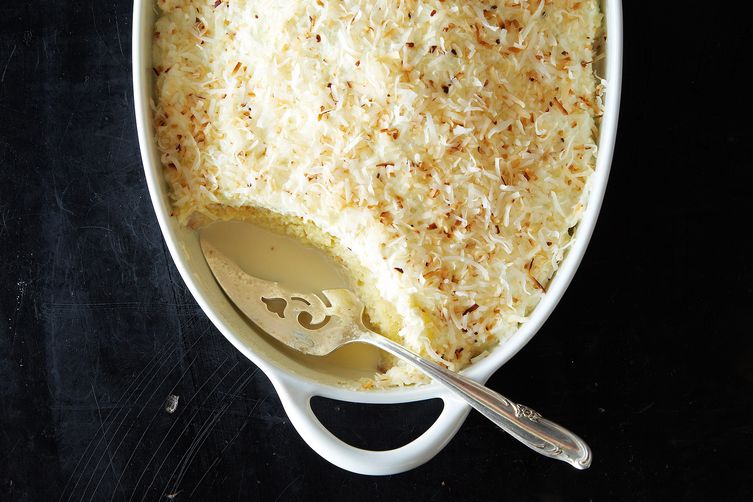 Aargersi writes, "It's rich and milky and coconutty and good. Ask the neighbors." Or the Food52 team, some of whom have had this for breakfast and lunch. 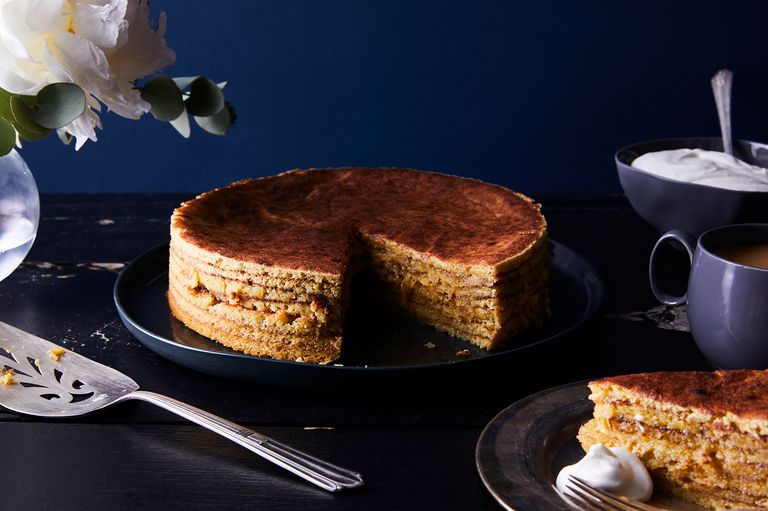 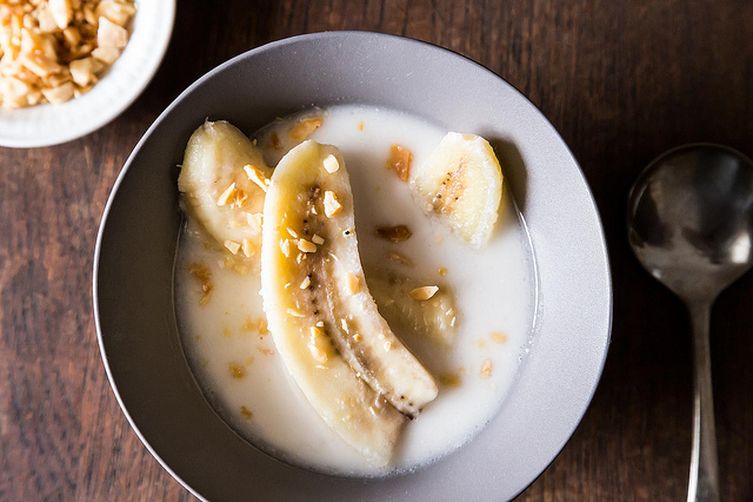 Like your favorite sweater and a big hug, all at once, in a bowl. 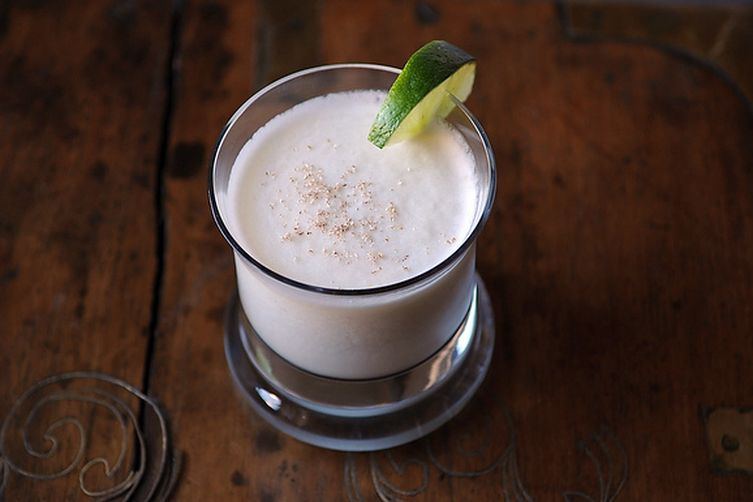 This is our co-founder Merrill Stubb's all-time favorite piña colada. She writes, "After a few experiments, I found that a combination of coconut milk and cream of coconut produced the right blend of sweetness and creaminess. A spritz of lime juice and a grating of fresh nutmeg were later additions." Cheers!

What's been your best coconut milk experiment? Tell us in the comments!

Chefgan October 29, 2020
Cooking fried rice round it up with coconut oil with a few flip makes the fried rice more healthy and a hint of frangrance of coconut.

AntoniaJames August 30, 2017
Mallika Basu's basic tomato curry sauce https://food52.com/recipes/35952-tomato-curry-sauce + coconut milk + whatever protein /grains / vegetables you have on hand = dinner. I make triple batches of the sauce and freeze in one and two cup portions for this purpose. Also, that sauce + frozen chopped spinach + chickpeas = chana saag 15-minute dinner (we eat it with brown rice), another great reason to keep this sauce on hand. ;o)

Brittany P. August 6, 2016
I do edamame in coconut milk & sambal with a touch of soy sauce or salt. Delish.

Scallen July 26, 2016
I do the recipe from P.Deen French Coconut Pie and sub the milk with Coconut milk to give it more coconutty flavor. Easy as pie! http://www.foodnetwork.com/recipes/paula-deen/french-coconut-pie-recipe.html

Terri July 9, 2016
If you're interested in the environmental impact of coconut farming, here's some good information: http://www.onegreenplanet.org/environment/is-your-obsession-with-coconuts-harming-the-environment/
I am concerned about the transportation costs and environmental effects of tropical fruits when they become so popular we find them in everything. I suggest using it consciously; and buy organic fair trade when possible!

Jessica M. August 19, 2015
I love making tapioca pudding with coconut milk and a pinch of cinnamon!

Karen T. July 20, 2015
I use coconut milk to make my veggie pot pie instead of regular milk.

Annada R. July 19, 2015
I use coconut milk as an enriching agent in this asian inspired tomato soup. Heat 3 tsp clarified butter or ghee in pan. Add 1/2 tsp cumin seeds and once they stop popping, add 3 tbsp tomato paste and 1 cup of water. Salt and pepper this tomato mix as per your taste. Once this mix boils, add 1/2 cup unsweetened, canned coconut milk and let it boil again. Top it off with some chopped cilantro. I love to drink this rich soup on a cold, wintry day. day.
Author Comment

Janet M. July 19, 2015
For roti de porc au lait, I substitute coconut milk for cow's mild for simmering they pork. Since coconut milk doesn't curdle, I can add citrus flavorings. (Lemongrass works really well with the pork and coconut milk.) I've also adapted the recipe to use with a whole fryer chicken. You can really pack in the citrus with chicken.

Robert July 16, 2015
Canned sugar-free coconut milk (forget the pretend coconut milk in cartons) opens up a whole world for your dairy-intolerant friends and family. Try it in coffee or tea, you will be shocked how good it is. Even traditional dessert recipes can work well, although you will need to experiment to see which of the two types of canned coconut milk — light or the heavier version — works better for you. You'll want to test out several brands as the quality and flavor varies. Trader Joes & Thai Kitchens are good picks.

Carolina J. July 16, 2015
Limonada de coco. Milk coconut with lemon juice, sumar and a lot of ice. Its from Colombia

MarieGlobetrotter July 16, 2015
Curried rice with coconut milk, unsweetened coconut flakes, apples, banana, and black currants. Creamy and delicious. Recipe my mother used to make when I was a kid (and you can also add chicken to it). Here: https://food52.com/recipes/20756-rice-with-curry-and-fruits

James July 15, 2015
Not sure if posting links from other sites is appropriate here, but here is one of my favorite. Kerala fish curry with coconut milk - http://mariasmenu.com/spicy/kerala-fish-curry-with-coconut-milk
Author Comment

AntoniaJames July 15, 2015
Interesting recipe! Never heard of kudampuli. Will have to run that down. Thank you for posting the link, James. ;o)

Antonia - Kudampuli is a souring agent (like tamarind) and is widely used in fish and seafood preparations in Kerala, South India. Dried kudampuli is soaked in water for sometime and then added to the curry. The combination of kudampuli and coconut milk works really well.