Every other week we get Down & Dirty with our favorite unique seasonal fruits, vegetables, and more.

Today, five things you should know about the herb borage (besides the fact that it exists). 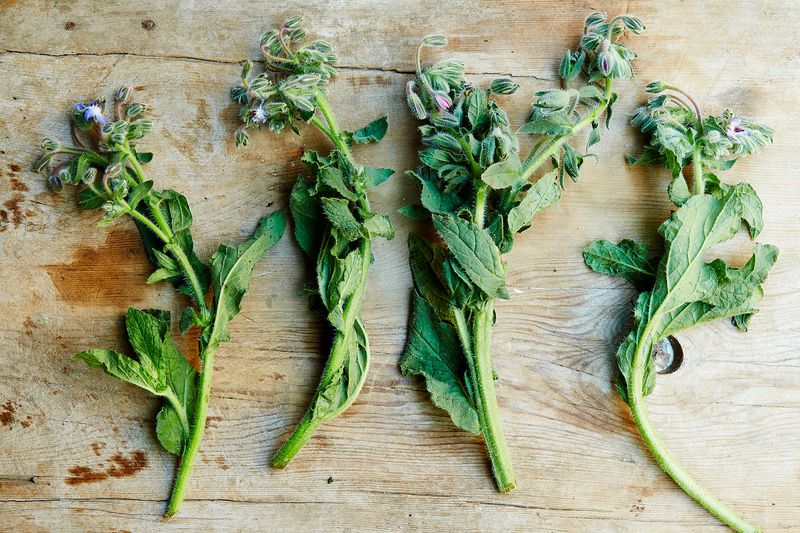 1. Borage is a boon for your garden.
Borage (pronounced like "lovage") is often planted solely to attract bees, but is also a useful companion plant for tomatoes (as well as other types of produce like strawberries and squash). It’s an annual, though you might as well consider it a perennial: Borage is great at self-seeding, meaning it will reappear in your garden every year unless you take drastic measures to prevent it.

2. Borage flowers are one of the few edible plants that are naturally blue.
Borage is a little gangly looking—"rustic" if we're being nice—but its flowers are stunners. The plant is also known as starflower (for obvious reasons) and while its flowers are most often blue (3, below), they can also be white, pink (1, below), or purple (2, below). Their dazzling appearance and sweet, honey-like flavor makes them a stunning garnish floating on top of cocktails, but you shouldn't limit yourself to drinks. Borage flowers can adorn everything from salads to potatoes, and they can also be candied or frozen into ice cubes. 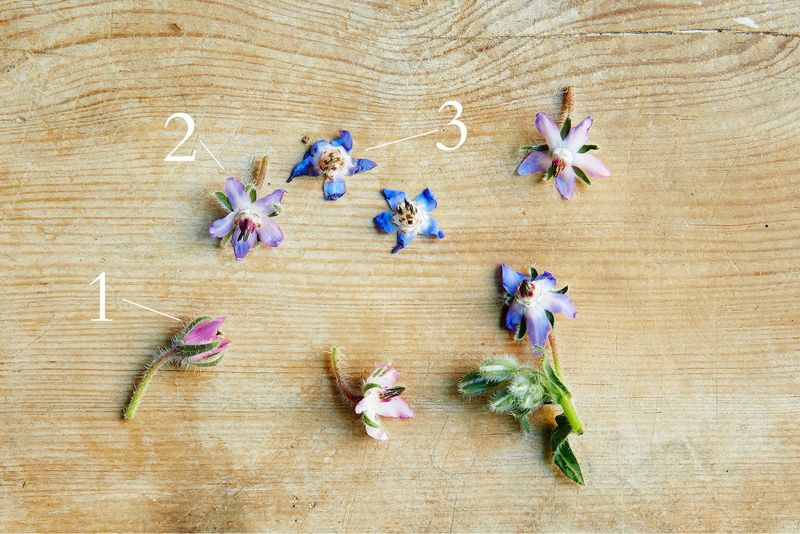 3. The leaves are fuzzy but edible.
Borage belongs to the forget-me-not family (properly known as Boraginaceae), most members of which have hairy leaves (4, below). Borage is no exception, but younger leaves are less furry and perfectly palatable in raw applications—like strewn in green salads or panzanella. The leaves have a pleasant herbal, cucumber-like flavor and, like the flowers, make a great garnish for cocktails—especially a Pimm's Cup.

4. More mature leaves are best cooked—heat will destroy the fine hairs.
Use borage as you would spinach: Try adding leaves to soups and stews near the end of cooking or using them in a ravioli filling. If you have large quantities of borage, use it as the base of a dish, like creamed greens, green sauces (like chimichurri), or borage soup. 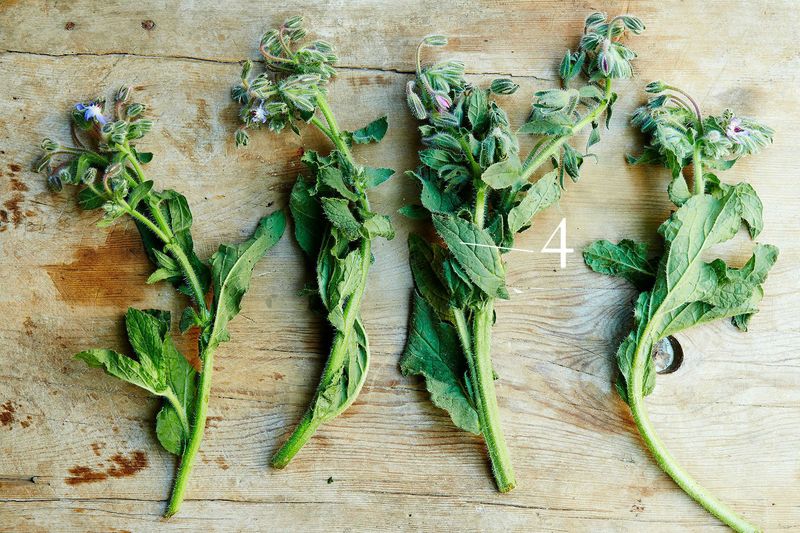 5. Borage has medicinal value, too.
Rodale’s Illustrated Encyclopedia of Herbs notes that Pliny the Elder considered borage to be an antidepressant and that Celtic warriors drank borage-flavored wine before battle to give them courage (though whether their increased pluckiness was due to the borage or the wine is up for debate). Herbalists still believe borage is useful in treating a wide range of ailments from depression to skin inflammatios. But take note that borage is considered to have laxative properties as well. So moderate your intake until you know how it affects you. Otherwise, the only courage you’ll need is to resist the call of nature (sorry, we went there).

Tell us: What are your favorite ways to use borage?

monika August 11, 2015
It is a pest. I've tried to eliminate borage from my garden after I had thrown seeds of "edible flowers" in my garden last year. Beware! It takes the place of all the others, and to get rid of it takes truckloads of patience...

Smaug August 9, 2015
A pretty good garden plant for people who spend a lot of time gardening, but it can become weedy fast if not kept up with and, like many of the boraginaceae (echiums are a good example) can be unpleasant to the touch, especially when it starts to dry out. It's reasonably easy to weed out, though, as it generally won't regenerate from roots and has to be fairly mature to set seeds. One of the better- and truer- blues available.

Shelley M. August 9, 2015
Oh yes, Ive grown borage and enjoyed it. Another forgotten herb you might like to introduce people to is Sweet Woodruff.