Turducken Has Been Weird for a Very Long Time

Learn about the origins of this very strange Thanksgiving tradition.

A turducken is weird. Like very weird. It may seem like it’s part of a recent trend in creating super over-the-top food creations all for the sake of posting a jaw-dropping photo on Instagram, but this opulent creation dates back centuries. Three incredible meats stuffed on top of one another and rolled up into one package? And a bread stuffing too? It’s the ultimate Thanksgiving dinner. But as bizarre as turducken may seem on the surface, it’s one dish that’s part of a robust culinary tradition known as engastration, which is essentially food stuffed into more food. As you slice deeper and deeper into the story (and the meat itself), it only gets more delicious and odd. Ahead, you’ll find tips for how to make a turducken and dive deep into the robust history of this popular 20th-century dish.

The History of Turducken

The late Cajun chef Paul Prudhomme claimed to have invented the turducken (a turkey stuffed with a duck stuffed with a chicken) in the 1970s. He became synonymous with the dish—and even trademarked the name in 1986 (Turducken™). Yet, there are plenty of skeptics who aren’t quite sold on the origins of the turducken and Prudhomme’s ownership of the invention.

When Amanda Hesser inquired into the turducken’s history for The New York Times in 2002, food writer John T. Edge told her: “It strikes me as a dish invented by men in a hunt camp.” Muddying the waters further, Wikipedia cites Dr. Gerald R. LaNasa, a New Orleans surgeon, as turducken’s creator. Go figure.

While the origin of turducken might forever be shrouded in mystery (much like the hamburger, the pavlova, and other essential foods), it is indeed part of a long history of “engastration,” the practice of stuffing and cooking one animal inside another.

Reports of engastration go all the way back to the Middle Ages, if not earlier. It may have started with the cockentrice, a monstrosity made by stitching together the head and upper torso of a pig with a capon, found on feast menus from the fifteenth century. Dating back to the Roman Empire, the fictional Satyricon featured the (possibly fictional as well) Trojan Boar, a thousand-pound hog stuffed with live birds. 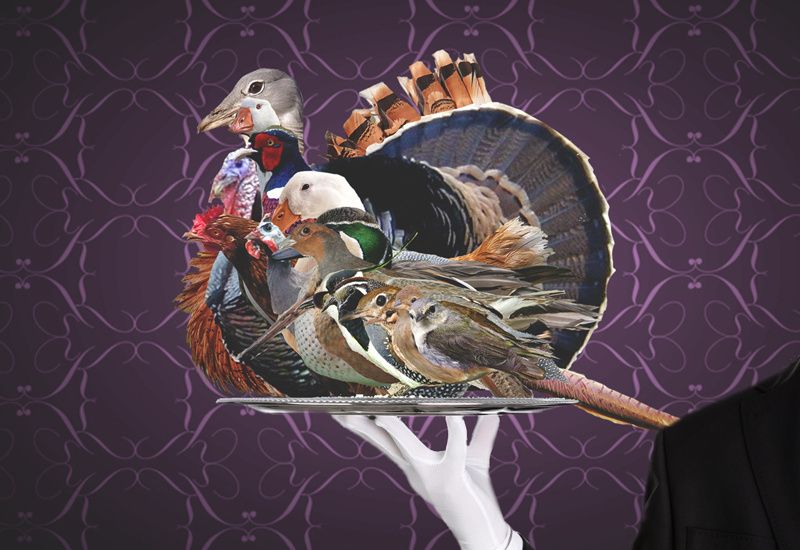 Its heyday wasn’t until the eighteenth- and nineteenth-century, where stuffing meat inside of other meats was a way to show off one’s wealth and impress guests in Europe. A recipe for one of the most famous (or infamous) versions of engastration was published in 1807 by Alexandre Balthazar Laurent Grimod de la Reynière. In his Almanach des Gourmands, considered to be the world’s first serial food journal, a recipe for rôti sans pareil (“the roast without equal”) called for 17 birds to be stuffed into one another and roasted. The Yorkshire Christmas Pie, a combination of turkey, goose, pheasants, partridges, woodcocks, snipes, grouse, and widgeons (not to mention bacon, ham, truffles, and calves feet) wrapped in a crust and baked, was served at Windsor Castle in 1858. But the west isn’t the only place where you’ll find engastration.

The Kiviak, a traditional winter dish consumed by the Inuit in Greenland is a seal stuffed with 400 to 500 birds, fermented out of doors under a pile of rocks for anywhere from 3 to 18 months and then eaten raw. The Guinness Book of World Records gave the title of “Largest Meal” to the so-called Bedouin Wedding Feast, a whole camel stuffed with a lamb stuffed with 20 chickens stuffed with even more eggs, nuts, and spices.

Vegetarians Can Join, Too 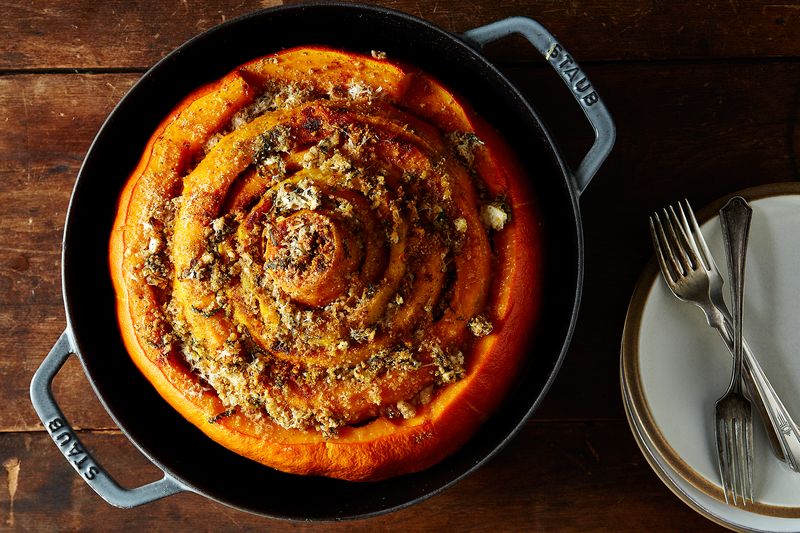 If you thought the urge to stuff was solely limited to carnivores, you were wrong. Sweets have found their way into the historical lineage of engastration as well. In 2009, home baker Charles Phoenix created the “cherpumple,” a three layer cake with pies baked into each layer. Dubbed the “turducken” of cakes, the cherpumple is composed of a cherry pie baked into a white cake, a pumpkin pie baked inside a yellow cake and an apple pie baked inside a spice cake, and then the whole thing is coated with cream cheese frosting. It takes three days to make because each layer must cool before being baked into another. 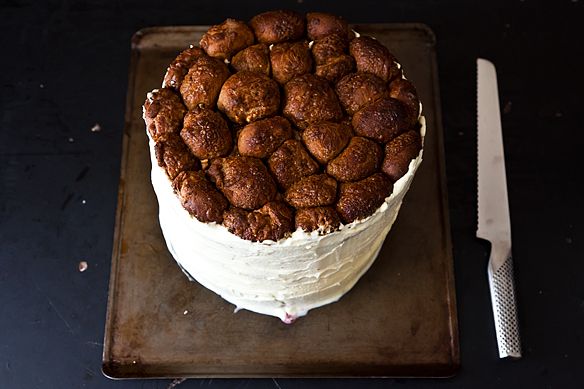 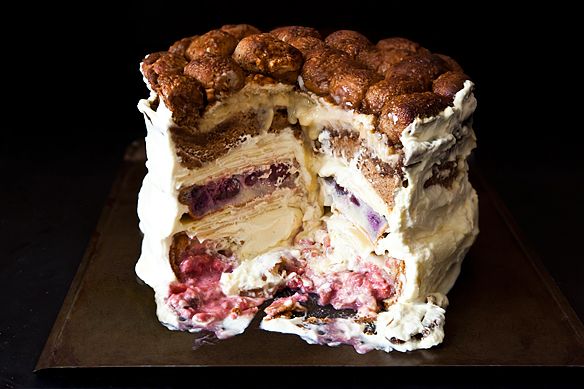 Why do we do this?

Finding one’s inner Dr. Frankenstein? Maybe. A primal instinct to show off who’s on top of the food chain? Perhaps. But, let’s face it: Whatever the psychological impulse, the whole undertaking of using ingredients that could stand alone as their own dishes and then putting them together like so many puzzle pieces also has a geeky intellectual appeal. Engastration is like following a meta-recipe: a recipe of recipes. 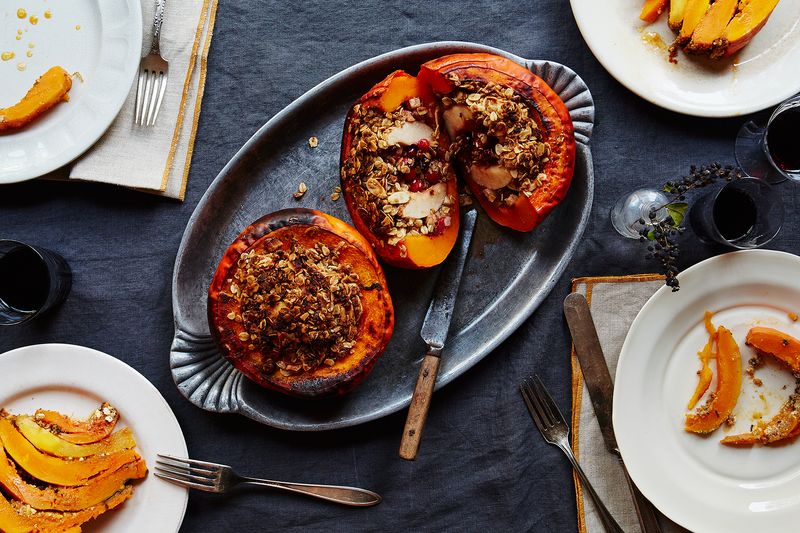 For the modern gastronome, turducken has emerged as the ultimate in holiday culinary projects. With all of the deboning and stuffing required—not to mention eight hours or more of cooking, basting, and worrying, it is the closest thing to a culinary marathon.

The turducken is likely the most famous form of engastration, so what did its supposed creator, Paul Prudhomme, think of the situation—the dish for which he is famed and will be forever associated with? In a 2008 CNN interview, Prudhomme practically swooned as he waxed about what it’s like to taste turducken. “Can you imagine how it would feel to have your fantasy girlfriend in front of you and you’re just going to get your first kiss,” Prudhomme told Anderson Cooper. “That’s the way it feels.”

How to Make a Turducken

If you want to learn how to make a turducken for Thanksgiving—or just want to learn more about this over-stuffed concept—let’s start with the ingredients that you’ll need. A 12-14 lb. turkey, whole duck, and chicken. Oh yeah, and a flavorful, earthy sausage stuffing that you can make, too. The combination of the meat and stuffing is the ultimate all-in-one Thanksgiving dinner. Turducken recipes are quite long and involved but in short, the process involves boning a chicken and laying it flat side down on plastic wrap on top of a cutting board. Then, add a tightly rolled sausage link to the center of the chicken and roll the entire package up into a tight cylinder.

Next comes part two: bone and butterfly a duck so that the meat can lay flat on a board, skin side down. Spread more sausage meat over the inside of the duck meat. Take the chicken-sausage cylinder (remember that fun thing?) and place it in the center of the flatten duck. Sounds appetizing, we know. Roll it up into one larger package.

Now comes the fun part (if you weren't already having fun). Add the chicken-duck-sausage (a chucksage? chick-a-duck-sage?) and place it in the center of a whole butterflied turkey. Wrap the two sizes of the turkey over the chicken-duck roll-up, secure the skin, truss the bird, and roast it. Simple, right? We thought so.

If you’re embarking on making a turducken, you should know that it will be significantly more expensive than roasting a regular turkey since you need to buy three to four expensive cuts of meat rather than just one.

Because a turducken calls for so many different cuts of meat all in one (very large) bundle, plan for it to take significantly longer to cook than a regular turkey. Depending on the size of the bird, a turducken could take anywhere from 7 to 12 hours to cook in a large roasting pan.

But there are some similarities between a turducken and a regular roast turkey. For example, you should generously coat the turkey skin for a turducken with olive oil or butter to ensure that it gets extra-crispy and super golden brown. You’ll want to make sure to heat the oven, of course, and cook the poultry, when the internal temperature of the turducken reaches 160-165 degrees F, that’s when you know it’s time to remove it from the oven. If you’re still prepping the rest of your holiday side dishes, leave the turducken in the roasting pan and cover it with aluminum foil to ensure that it stays warm (though with a centerpiece this large, it certainly won’t cool down immediately).

A turducken is the epitome of a labor of love and the process may turn you off from wanting to actually dig in, as it did for Food52’s own Kristen Miglore, it’s guaranteed to help achieve your most memorable Thanksgiving ever.

Have you ever attempted to make a turducken? Let us know how it went in the comments below!

joshfriedland.com
I'm the creator of the Twitter mashup @RuthBourdain and the author of COMFORT ME WITH OFFAL and EATYMOLOGY: THE DICTIONARY OF MODERN GASTRONOMY.

Turducken L. August 17, 2022
Ordering turducken from Cajun Grocer or https://www.Turduckens.com/ is much easier ;)

Ali S. November 11, 2015
They sure are—thank you for catching, the typo has been fixed!