The Dessert Poised to Become Our Next Obsession

The only authority I have to write this article is that I love mochi, and the proof is that I named my cat Mochi and that I order double mochi whenever I go out for frozen yogurt. Needless to say, I am ready for the mochi revolution! (For Hillary? That's a question for another website.)

How to Make Homemade Mochi for the Lunar New Year

And I know that it's coming. I hope—fingers crossed as I type—that any hype surrounding salad cake and rainbow cake can be contained. But the buzz about mochi—beyond mochi ice cream and mochi at the frozen yogurt store—which consumers in the U.S. seem have been slow to catch on to? Bring it!

A recent New York Times article by Tejal Rao described the textural wonder of fresh handmade mochi—"dough as smooth and soft to the touch as a kitten’s paw pad"—and surely introduced my parents (and other loyal Times readers) to daifuku (little balls of mochi wrapped around a sweet filling, like red bean paste or an entire strawberry). And I've been seeing them everywhere I turn (namely, on Instagram and in the blogosphere)—but I predict that this is only the beginning of stateside mochi mania.

Mochi= ridiculously easy to make. Still working on the chew factor, but these are SO fun to play with, and only need three ingredients!! Stuffed with pretty much anything you want, and here I chose homemade kaya. Rice flour has a substantial amount of protein, vitamin B6 and niacin, plus is perfect for any coeliac out there because it's gluten-free. Recipe for kaya mochi will be up soon🌚

Because while daifuku might be getting easier to find in the U.S. with every national news article likening it to a kitten's paw, it's important (and exciting!) to remember that there are a huge number of mochi-like desserts ("mochi varietals," I like to call them) made with sweet glutinous rice in East and Southeast Asia (and beyond those regions, too).

In Carolyn Phillips's Dim Sum Field Guide (coming out in August), she describes Sandy Filled Mochi—soft "pillows of steamed rice dough [...] wrapped around a lava-like filling of ground black sesame seeds, sugar, and fat" and "tossed in ground peanuts or soybeans"—as the ancestors of more famous Japanese versions. Snowy Mango Mochi come covered in shredded coconut and stuffed with cubes of ripe mango. And Mochi in Syrup come unfilled, tossed over heat with sugar, ground peanuts, and toasted sesame seeds. I want all of it!

Top Comment:
“I LOVE MOCHI. <3 this article made me want to eat it outside of my normal froyo order. ”
— catherine M.
Comment

And there are desserts centered around sweet glutinous rice flour in the Philippines, and in Hawaii, and in Korea and in...

What's easily-accessible to us in the rest of the U.S. at the current moment is only the tip of the (squishy, bouncy) iceberg. Think of what's in store: Is mochi destined to go the way of sushi, ramen, pho—other foods that have been fundamental in Asia for decades, sometimes even centuries, but that get talked about like a "new discovery" in the contiguous U.S.? Will mochi captivate our food culture and result in some great (and some terrible) interpretations and variations? If it means a greater variety of sticky rice desserts to obsess over, I sure hope so.

12 Filipino Desserts You Need to Know About (& Try!)

Here's a bit of proof of all that can be done with mochi (some delicious, some primarily adorable), and of just how much we mochi-uninitiated have to learn. Let's get started!

Warabi-mochi, pictured above, is not made of sweet glutinous rice flour, but of bracken starch ground from the root of the bracken fern.

And look, some glutinous rice flour made appearance on the (Not)Recipes app, too! 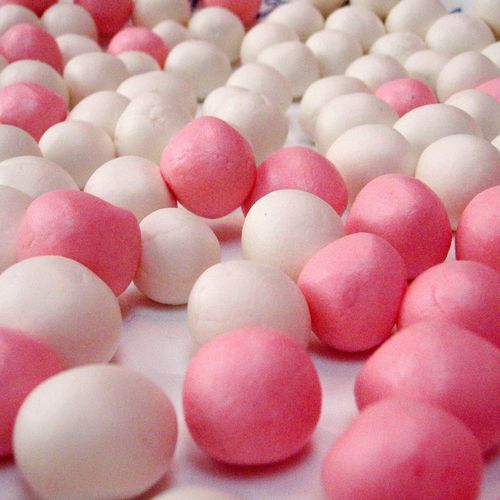 Joy Huang | The Cooking of Joy almost 7 years ago
46
My mom's tang yuan (mochi ball) recipe: mix glutinous rice flour with enough warm water until it feels like Play-Doh. Tint a third of the dough with red food coloring. Roll into a long snake and pinch off cm length pieces. Roll the pieces into balls. Cook in boiling water until floating for a minute or two. Serve by placing in a bowl, adding hot water, and adding sugar to taste. #momtest #notarecipe #Taiwanese #dessert
1 comments

What's a dessert you've tried abroad that you wish were more readily available in the U.S.? Tell us in the comments. We'll start a petition.

JinJoo L. July 18, 2016
I wish Korean Bingsu (shaved ice) was available in the US everywhere! And Bingsu almost always include mini mochis. Mini mochis are my favorite part of the wonderfully cooling shaved ice dessert. I recently posted a recipe here -http://kimchimari.com/bingsu-korean-shaved-ice-this-summer/

stefanie July 14, 2016
Interesting! I like how to categorized these desserts as mochi "varietals". I grew up eating most of these desserts and somehow never put it together that tangyuan, jiandui, and mochi all came from the same flour! I think Americans could get really creative with mochi...excited to see what pops up in the next few months.

Mary July 13, 2016
Mochi is heaven. Lucky Angelenos can get freshly made mochi and manju from Fugetsu-Do, downtown: http://www.fugetsu-do.com/