First, of course, there was the egg in a bagel hole:

Egg in a Bagel Hole

Then, a few months later, the bagel grilled cheese (inside out, natch):

Inside Out Bagel Grilled Cheese

And then we had cheese-crusted eggs:

The only logical next step in the progression? To combine all the ideas into one: 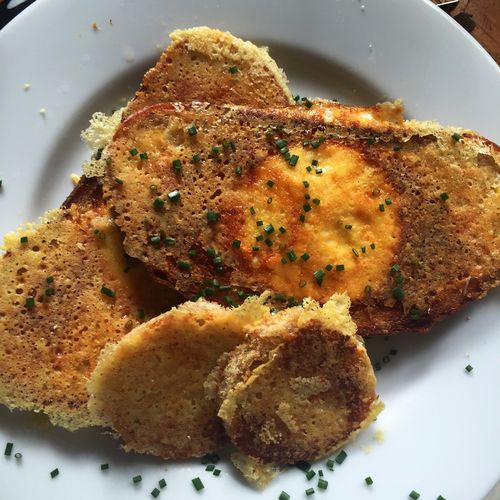 Becca H almost 6 years ago
43
Egg in the hole meets my favorite grilled cheese! I started by cutting a hole out of and buttering a couple slices of bread and shredding up a combo of extra sharp cheddar and Parmesan. I made a layer of cheese in a preheated skillet, laid the bread over it and cracked the egg into the hole and seasoned it with salt, pepper, and plenty of smoked paprika. Let the egg and bread cook for a couple minutes until the cheese was crispy and golden, then I scooped the bread out, made a new layer of cheese in the pan, and returned the bread to the pan, uncooked side down. Once that side was beautiful, I topped the whole thing with chives from the garden because everything is better with alliums.

Becca H has done just that, trading the bagel for two slices of bread (though you could go bagel, if you were so inclined) and losing the classic sandwich construction: The outsides of each slice of bread get cheese-crusted, rather than sandwiching a slice of cheese in the middle, like here. A good shake of paprika gives it a pimento cheese-esque tone. And can't you just imagine serving these at brunch? (Invite us, please.)

How else have you turned the egg-in-a-hole on its head? Tell us in the comments.