This week, Jenny is taking a day off. But we know a Monday with no Jenny would be a very sad day indeed, so we've compiled some of our favorite zingers, rants and confessions below. And for even more Jenny, read our behind the scenes spotlight on her here. 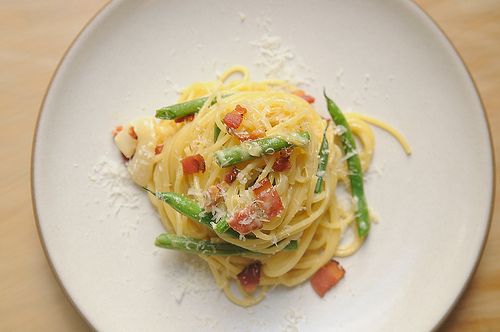 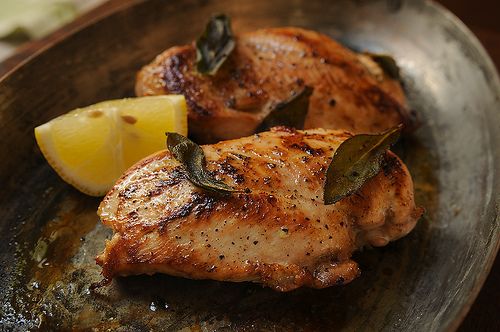 On Pasta Carbonara with Fresh Green Beans:
"Do you agree that the home cooking world can be strictly divided between cutters and burners and that the two groups are distinct in important ways that make them as distinguishable as say St. Bernard lovers with those who prefer small, hairless cats? Discuss."


On Broiled New York Steak:
"Or maybe it's because I know my Texan husband will always smile when his plate o’ steak is plopped before him, a small reward for living with the likes of me, who is prone to bouts of crying over the fact that I cannot find the blade of my mandoline."


On Oreo Macaroons:
"I am referring specifically today to the French-style cookies, although I have been known to down a canned coconut macaroon, discovered at the bottom of my pantry when I was in search of soba noodles, because I simply don’t feel shame."


On Salmon Kedgeree:
"Many days when I am sitting at my desk charged with thinking about suspension bills, my mind wanders to other things. Why does my family own so many washcloths shaped like farm animals? Am I too old to wear a shirt fashioned from synthetic feathers? What should I do with all this leftover salmon?"


On Roast Cod with Little Tomatoes and Assorted Olives:
"This dish also falls under the category of dinners that you can begin right after walking in the door –- in this case by tossing your oil-dabbed tomatoes in the oven while you tend to other things, including chopping up your garlic, taking off your work costume and pulling on sweatpants and calling out things like “Who would like to empty the dishwasher?” and receiving no answer."


On Corn Risotto with Anchovy Sage Leaf Bite:
"Don’t think I don’t know how your collective minds work. You think that I am madly in love with Corn Risotto Garnished with Bacon and Anchovy Sage Leaf Bite just because MyCommunalTable instructs you to drink wine while you cook. This is just a bonus, people. There is a lot of excitement that is about to happen on your stove, so please don’t focus on drunk mommy!"


On Ginger Spiced Molasses Sugar Cookies:
"There are those who seek their thrills from pâte à choux, and others who find pleasure in the perfect whipped meringue. Me, I dream of gingerbread. It is the state controller of desserts -- really what’s not to like? And do you even know what it does?"


On Minestrone Soup:
"You can imagine that when you are a fish out of water at your new office (we’re talking mackerel in the rain forest here), madly working the cheese grater at your desk does little to dispel the skepticism of your colleagues about your seriousness of purpose.
...
I recommend you bring a cloth napkin to work too. Lunch, even one reheated at the office in a dirty microwave near the forlorn box of Krispy Kreme donuts and several dirty coffee mugs, should always be a civilized affair."


On Indian Fried Fish:
"A little background: my husband agreed to join me at the Farmers Market, which is a little like me agreeing to join him at Baylor homecoming week, except that I won’t." 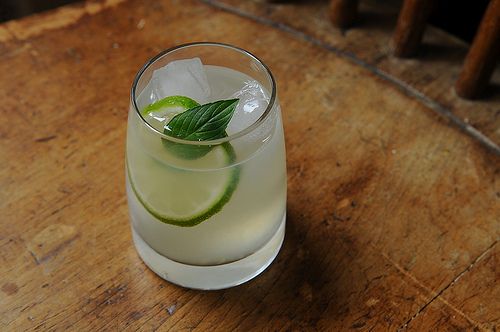 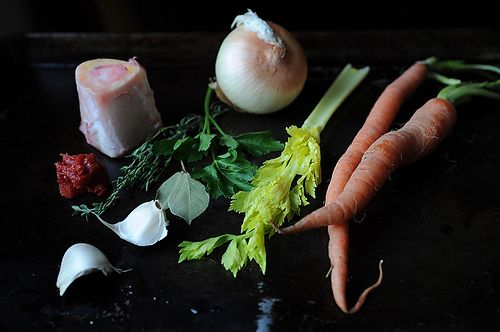 On Lemon Artichoke Chicken:
"I craved something slightly less virtuous, something that would pull chicken breasts, the ultimate culinary wallflower, on to the dance floor to do the oven-baked Single Ladies dance."
...
"If you are Jenny, you will have been unable to find Meyer lemons in Washington DC, which will have caused you to stand for a while in Whole Foods, thinking thoughts about lemons, which then will have led to musings about strawberries and all the rosemary you were able to get in Los Angeles in November, and pretty soon you will have begun to lament every life choice you’ve ever made and start crying. If you are a person in full possession of your mental health, you will simply substitute Eureka lemons."


On Beef Stock:
"Will I let a vote on the Dream Act stand in the way of a well-cooked meal? No I won’t!"


On Foil-Roasted Salmon with an Aromatic Jus:
"I used Champagne, because my friend Elisabeth had come earlier in the day for tea, and tea in my house means Champagne, which is how I manage to maintain a respectable passel of girlfriends, in spite of a fairly disagreeable personality and a penchant for despising every place I move to until it is time to leave, at which point it becomes Xanadu, but none of that really has anything to do with salmon so I am just going to move on to the part about the oven now."

On Rhonda's Spaghetti and Fried Eggs and Pangritata for One:
"Dinners alone at home for me are like grizzly bear sightings –- they don’t happen often, and in truth I wouldn’t want them to, but taken in isolation, they are really quite spectacular."


On Pasta e Fagioli:
"God has not blessed me with a store that carries ditalini, so I used conchigliette. You knock yourself out with whatever small noodle you can find."


On Grown-up Birthday Cake:
"Of course, this is the same universe that told me I should take advice about a $200 pair of jeans from a 19-year-old sales girl at Fred Segal, even though my behind was giving me quite a different narrative, the same universe that told me that it would be a good idea to tell the incipient pescatarian and bacon girl if they did not stop bickering in the back seat of the car, “I will take you with me to the Virginia quilt museum!” I mean, good people don’t demonize quilts."


On Cold Sauce:
"This is way shorter than waiting for, say, a baby, and cold sauce will not grow into a person who calls you “bipolar” for refusing to purchase a large box of Junior Mints at the movies." 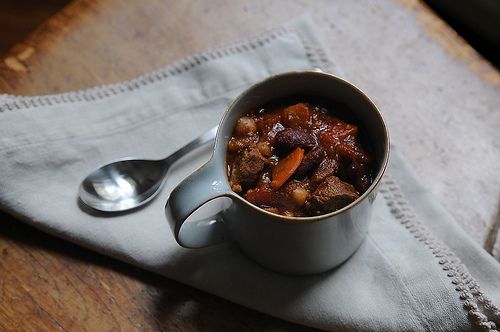 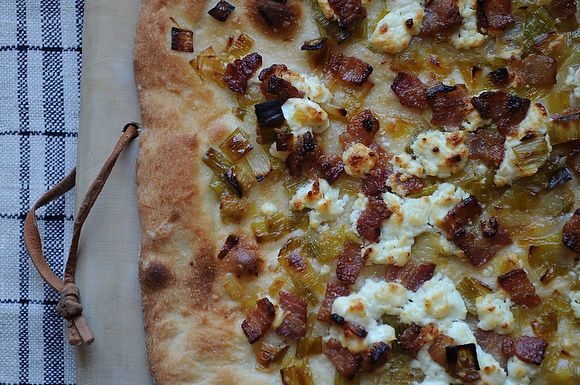 On Granola with Lots of Dried Fruit:
"However, do NOT add it to a non-fat, sugared up yogurt that food producers, with their patronizing view of your fat needs, may have forced upon your store."

On Lemon and Onion Roast Chicken:
"I have cooked chicken breast up and breast down; covered in butter or slathered with Crisco (thanks grandma); I have overcooked it to the point that it tasted like the farm dirt whence it came, and undercooked it so often my husband has accused me of trying to kill him for insurance money via his plate. I have been transported by roast chicken, and demoralized by it.
...
I did not use the potatoes, because potatoes make me hostile, but I used more carrots and parsnips than she suggested, because I like a little extra. Roasted parsnips are now my new favorite thing – can I get an amen?"


On Leek, Bacon and Goat Cheese Pizza:
"For my birthday, I asked my family for a pizza stone, because I felt certain that every ache and disappointment of my life would be quelled by the ability to make pizza in my own home. You may be surprised to learn that the truth was a bit more complicated.
...
Some dough may never rise, making you question how you ever succeeded at anything in culinary life; other batches will taste and feel like rain boots, causing you to throw away an entire day of anticipated glory. Pizza: it can bring you low."


On Spring Pea and Ricotta Torte with Lemon and Mint:
"We as a cooking people can agree to disagree about many things: are or are not dried chickpeas vastly superior to canned? Cornstarch as pudding stabilizer –- acceptable or Lucifer’s work? Just how long should the coffee sit in the French press? But on this we are certainly all in accord: when you present your spouse with their dinner, they should not bust out laughing."


On Pan-Roasted Chicken Breast with Dijon Sauce and Crispy Pancetta:
"Friends, we’re in this fight to perfect our chicken breasts together.
...
As you know, my favorite weeknight recipes are ones that require the least focus possible, so that I can go about picking the lint out of the dryer screen and lecturing my children about how good character is acquired through excessive attention to the compost heap. I don’t want to be interrupted with the unpleasant inquiry, 'What’s that burning smell?'"

boulangere March 13, 2012
And thanks for the new version of "tea. Plan to use that soon.

mcs3000 March 13, 2012
Loved reading them again. Another one of my faves was just last week re: meatloaf: "Ketchup or no ketchup? This question alone could start a minor Twitter war."

Ladystiles March 12, 2012
I think I like the last quote the best. Quirky is the best type of characters...

BlueKaleRoad March 12, 2012
Thank you for all you share, Jenny - I always look forward to your words and well picked recipes. I just had another giggle reading "good people don’t demonize quilts."

gt9 March 12, 2012
Thanks to all of you for making my Monday(s)...especially you Jenny! Please don't stop writing...or cooking.

Bevi March 12, 2012
Jenny gets to the heart of the matter. I totally relate to her Meyer Lemon crying jag.

aargersi March 12, 2012
We owe Jenny many thanks for so many great good laughs over the past few years!!