We're thrilled to announce a new biweekly column from Nicholas Day: On cooking for children, and with children, and despite children. Also, occasionally, on top of. 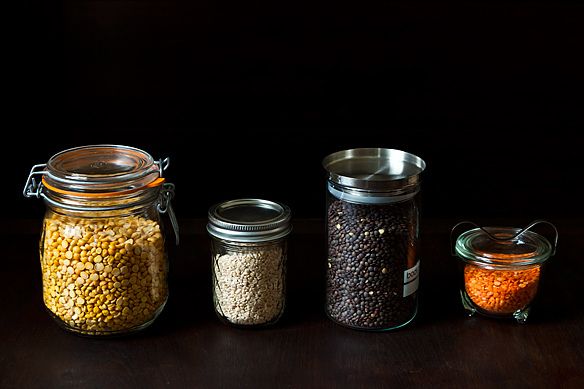 I have just taken inventory of my apartment and found: 1) a gloriously, emphatically pregnant wife; 2) a three-year-old whose diet looks like the USDA’s new food plate, but with raw dough where the vegetables should be; and 3) a pantry full of dried beans.

Also, a lot of wooden velcro-ed fruit, which never ripens.

This column will talk a lot about cooking for children, and with children, and despite children. Also, occasionally, on top of. But my problem right now is with the child who isn’t underfoot yet. For complicated gestational reasons, the pregnant member of the household needs to eat a lot of beans. It’s the placenta’s fault.

Look up “beans” in any index and you will find yourself uninspired. Beans and inspiration are antithetical. There are no cookbooks for beans that actually make you want to cook beans, which seems like the lowest bar a cookbook has to clear.

“Beans have a good reputation,” Alan Davidson tells us. This is the only place in the Oxford Companion to Food where Alan Davidson is wrong: there are few more discouraging words in the culinary vocabulary than beans. I do not say this proudly. I know I am supposed to prize beans as the soul of proper peasant cooking; I know beans, with some help, supply a good quantity of the world’s protein. Beans are honest, unfancy, forthright. If your car needs fixing, the beans will help you. Will the sun-dried tomatoes help you? They will not.

Not liking beans is like not liking your really nice next door neighbor just because he happens to be boring. It feels like a moral failing. 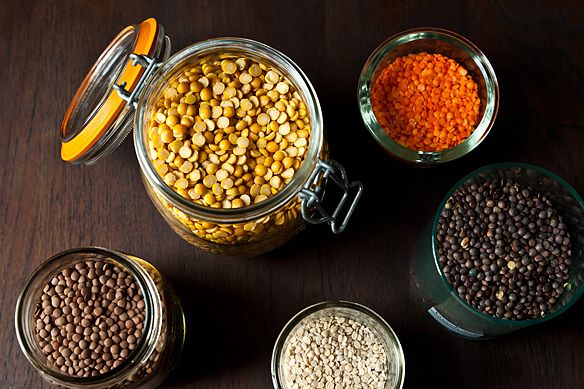 I gladly admit that the distinction between beans and lentils is semi-artificial. My definition, which may or may not be technically Linnaean, is that beans are what won’t be ready for dinner, lentils are what will. Dried beans are the sworn enemy of the family cook with no foresight. But lentils are a double agent: ostensibly a legume, secretly on your side.

People have been doing exquisite things with lentils since prehistory and a lot of those things are subsumed under the baggy heading of dal. (A lot of beans that aren’t lentils are subsumed under dal, for that matter.) As our freezer will testify, I would be happy to spend the rest of my life making lentils from the subcontinent. There are few things more satisfying straight from the freezer than dal. The spices hold out against the cold. Add rice, a simple raita, eat.

It’s easy to get an emphatically pregnant wife to eat dal. But how do you get a preschooler to eat dal?

First, you don’t try very hard. (This often works.) Second, you lower the spice, raise the sweetness, and learn to live with yourself. In Raghavan Iyer’s 660 Curries—a very good cookbook that, minus 300 or so recipes, could have been great—there’s a chana dal with golden raisins (chana dal being yellow split peas, of course, and technically not lentils, except according to my definition). Even with fewer chiles and zero black cumin, it is a riot of good taste. And a life-saving dinner for another night after this one. 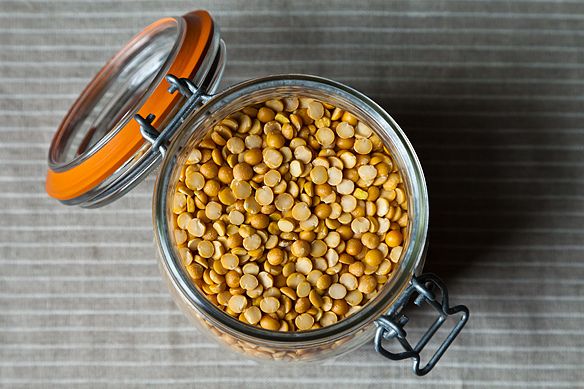 thesometimescook October 21, 2012
LOVED the writing - and i love dal in any form. especially with ghee and a dash of cumin and asafoetida. Yummm.

mrslarkin May 10, 2012
I'm late to this Chana Dal party, but so happy to have this column! Looking forward to more installments.

cate April 30, 2012
Did you hear me yesterday? When I was trying to menu plan for the week, Google'd "dinners for preschoolers" and walked away from computer with nothing, just angry and muttering, "Dammit, I don't want cook WITH them, just FOR them."

Very happy to see this new column. Please help us. (And I'm totally giving you points for using "placenta" on this site.) Thanks.

So, what's the verdict? Yellow split peas or chickpeas?

Nicholas D. May 7, 2012
So I've made this with both, and if you have the time, go with the yellow split peas. But as susan g says below, they do take a lot longer.

Raw dough: I know. I always imagine the yeast dough expanding in his stomach, like some sort of mutant version of the Strega Nona story.

renee T. April 29, 2012
When I want beans for dinner and didn't have the forethought to soak them overnight, etc, I put them in my pressure cooker. We have a busy family of 5 and I insist on healthy, whole foods being our diet. The pressure cooker is a life saver!

rcakewalk April 29, 2012
I was excited to read this, since I have a picky eater ... strangely enough he does like beans! I may have been disheartened by your feelings on beans, and thoughts on uninspired ways to cook them. As mentioned above, ample inspiration can be found both on Steve Sando's (Rancho Gordo) blog and in the cookbook he wrote with Vanessa Barrington, Heirloom Beans. I make between a half and a whole pound of beans a week, which we eat in all manner of ways - but my bean-freakiness won't stop me from following your new column! It always makes me feel a little better to see others passionate about good food having similar troubles with their children eating well too.

mcs3000 April 29, 2012
Great column! Love your avatar. Recipe sounds amazing. Like @savorthis, Heidi Swanson sold me on beans. I cherish her books. My fave beans are from Rancho Gordo - another great source for recipes and guidance on cooking beans.

susan G. April 26, 2012
I can only speak for my kids, and two of their favorite meals. One was hummus served with pita, and a tray of add ins -- grated carrots, cucumber slices, tomatoes in tiny cubes, alfalfa sprouts, with a yogurt sauce. The 2nd, refried beans (gently spiced) with tortillas or taco shells (to be avoided -- too messy), and a similar tray. When the kids put their own together, they happily ate veggies.
Now, a quibble: yellow split peas in N. America or Europe are not the dal that you want for this recipe. Chana dal is made from chick peas and cooks more easily than the other -- they take forever! Also, the pressure cooker is my friend. I just cooked a pot of whole Indian kala chana (black chickpeas), soaked overnight, in 20 minutes -- it's liberating!
Author Comment

savorthis April 26, 2012
Heidi Swanson makes some very good cases for beans and actually inspired me to cook up a big pot on, say, a Sunday so I'd have them during the week. My 3 year old loves beans and loves lentils (cooked with bacon, carrot, onion, red wine, bay leaf with an egg on top) and I am intrigued to try this dal recipe as well as see what you have planned next! Meanwhile, does your wife eat much farro? Might also help in the filling/satisfying/high-fiber/can-be-mixed-or-topped-by-almost-anything category. I ate a lot of it when pregnant, though only because I like it.

Devangi R. April 26, 2012
Love this column...My husband does not like veggies a lot. But he can eat any kind of beans, dals, and so we cook a lot of these. So this column will be really interesting. The recipe itself is really good. Just an addition of spinach to chana dal or yellow split moong dal also makes a good recipe. Infact, we had moongdal with spinach along the side of chapati yesterday evening.

Burnt O. April 26, 2012
As someone who spends her summers thinking up new ways to engage kids in the kitchen as a cooking instructor for kids - I adore this new column! Well done Nicholas! Also, when it comes to beans, I CANNOT recommend highly enough the new cookbook that came out in February by my friend Crescent Dragonwagon: "Bean by Bean" - a glorious compendium of all things beans. Beautifully researched, and with little bits of bean history and trivia sprinkled throughout. I've been cooking my way through it for weeks now. http://www.amazon.com/Bean-By-Cookbook-Recipes-Beans-Even/dp/0761132414/ref=sr_1_1?ie=UTF8&qid=1335452427&sr=8-1

stilllifewithwhisk April 26, 2012
I must disagree with your position on beans. They can be the basis of inspiring, even sublime, meals. You must, however, use decent beans. Perhaps Steve Sando's enthusiasiam for beans will convince you: http://ranchogordo.com

arielleclementine April 26, 2012
really fun! thanks for the recipe too- i've been on the hunt for a great dal recipe!

Peter April 26, 2012
I'm curious -- why does the pregnant member of your family need to eat a lot of beans?
Author Comment

Nicholas D. April 26, 2012
Gestational diabetes! (Despite having zero risk factors. She had it with our three-year-old, too. Her placentas apparently have some sort of evil spirit living within them. Is this the first use of placenta on this site? Did I win anything?)

Peter April 26, 2012
Interesting. And what is it about gestational diabetes that calls for a bean-rich diet?
Author Comment

Nicholas D. April 26, 2012
Beans are kinder to her blood sugars. (As opposed to other carbs.) Very individual, I assume.

Westminstress April 26, 2012
Thanks, this looks like a good one to try. And check out Tamar Adler's chapter on beans in An Everlasting Meal -- she just might change your mind about beans!
Author Comment

Nicholas D. April 26, 2012
That's a great chapter. But I finished it thinking that I'd love beans... if I were Tuscan. (This is my feeling on beans generally: that even more so than most foods, they're so deeply embedded in their cultural context that outside it they're hard to appreciate.)

fiveandspice April 26, 2012
What a fun new column! Timely for many it seems, useful for anyone, and a blast to read! I can't wait to hear more from you, Nicholas.