All week, we'll be featuring recent college graduates and longtime friends Liyna Anwar and Anum Arshad as they plan, prepare, and host a backyard South Asian-inspired feast for their mothers.

Today: Anum takes us step-by-step through making Sooji Ka Halwa, a traditional Pakistani dessert. This is the fourth post in their Big Feast -- check out Shopping for Spices, Building the Tandoor Oven, and All About the Hyderabadi Biryani. 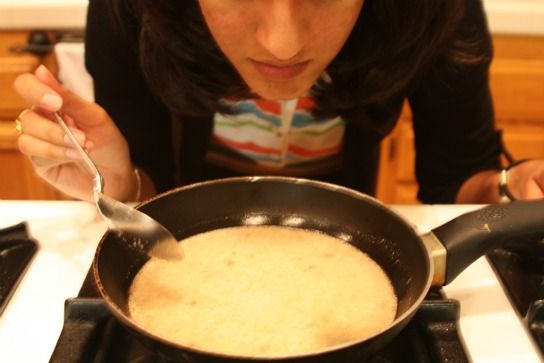 Growing up, I would always anxiously anticipate the summertime, the season that my grandmother would pay an extended visit and grace our home with her ever-spirited affection, care, and, best of all, food. One dish that has remained a true comfort food, and one that I will always associate with the sweet nostalgia of my childhood, is a traditional Pakistani dessert called sooji ka halwa, which essentially means “semolina dessert.”

One of the reasons we selected sooji ka halwa as a dessert for our Feast is because of its homey and comforting nature. The dish is also prepared in just minutes over the stove, using a few simple ingredients that are easily accessible. Liyna and I also thought that highlighting this dish would give you all a novel way to look at cream of wheat – a food item traditionally seen as just a breakfast porridge or baby food.

Though I had always avidly watched my grandmother prepare the sooji ka halwa for me, I never actually tried my own hand at making it… until this Feast.

First, the ingredients. From prep to finish, all you need is the sooji (a.ka. the cream of wheat), sugar, oil, water, cardamom, saffron, and pistachios. 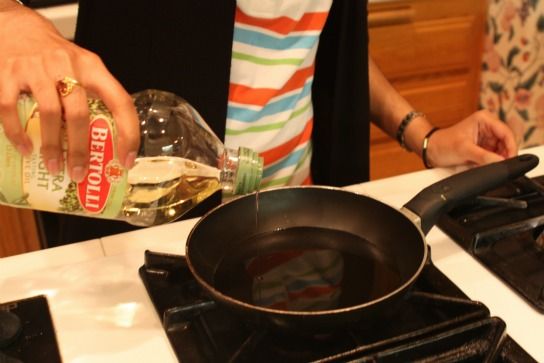 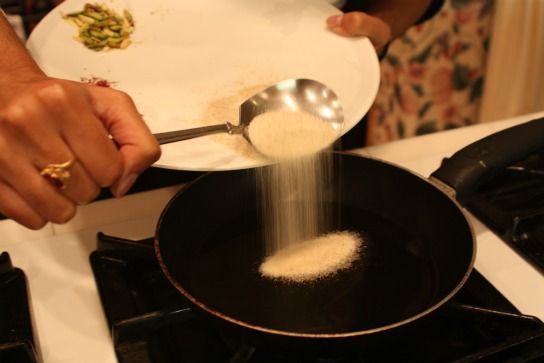 To begin, pour enough oil to fully cover the base of the pan, and turn the stove to medium heat. 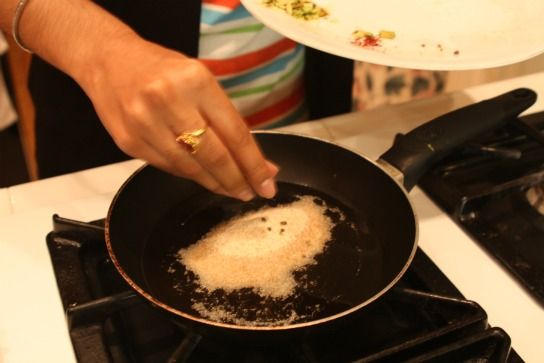 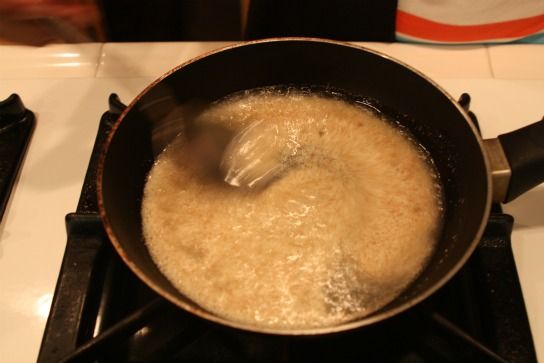 Stir the mixture delicately in a consistent circular pattern, intermittently leaving a break of a few seconds. My grandmother was quick to note not to switch from a clockwise motion to counterclockwise motion abruptly – once you start in one direction, keep it going throughout, no sudden changes. At first, I wasn’t sure if such a small detail actually made a difference in the final product of the sooji ka halwa, but after several (and when I say several, I mean several) trials and errors, I realized that each small detail really did affect both presentation and taste. 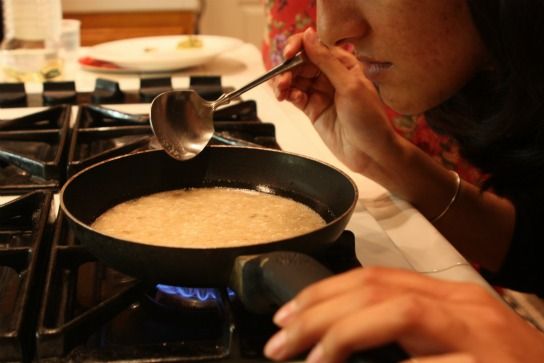 Here I am, trying to understand what the scent is I’m looking for before it’s time to pour in the water. My grandmother told me that a distinct scent of the simmering sooji mixture should be emanating from the pan. Actually, as she conducted a sooji ka halwa demo prior to my own attempt, she was very keen to describe the exact degree of aroma that I should look for -- but I just smiled and nodded, and pretended like I knew what she meant. Alas, my grandmother swears a true sooji master learns the scent with abundant practice and ultimately develops a keen intuition for when it's ready. 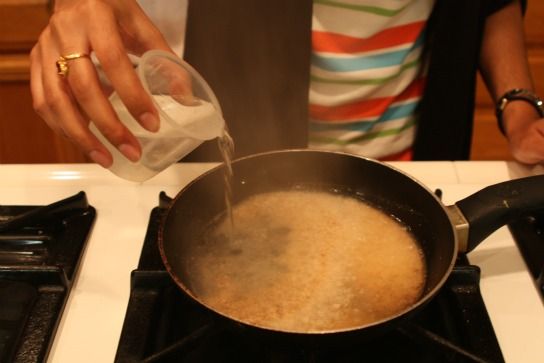 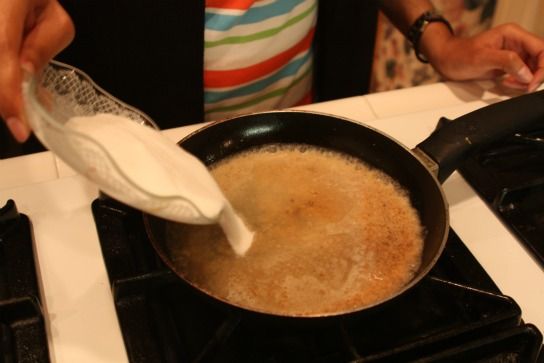 The moment finally arrived – and with hesitation and excitement (read: near-crippling fear), I slowly poured in the water, only to be met with a sudden loud crackle that only intensified as I finished pouring. I have to admit, since this was my first time truly making the sooji ka halwa on my own, I was definitely startled… But with the moral support of Liyna behind the lens, I finished this process at ease. Liyna shook her head at me in amazement, baffled that I did not know that this would be the reaction when hot oil and water mix! Ladies and gentlemen, Liyna Anwar: foodie, budding food photographer, and heroic best friend to the rescue of her severely unacquainted kitchen counterpart. 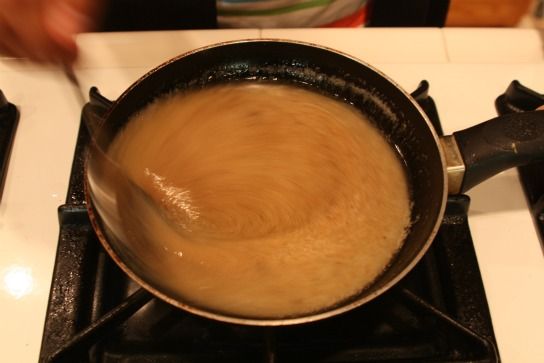 Round and round the mixture went as I continued stirring the pan, getting mesmerized in the sooji vortex. Over 2-3 minutes, I witnessed the water slowly evaporating, and the eventual thickening of the mixture.

This is the exact golden caramel hue we look for when knowing that the time has come to switch off the stove. With a final light garnish of crushed pistachios, the sooji ka halwa is ready to eat… best consumed piping hot, of course. 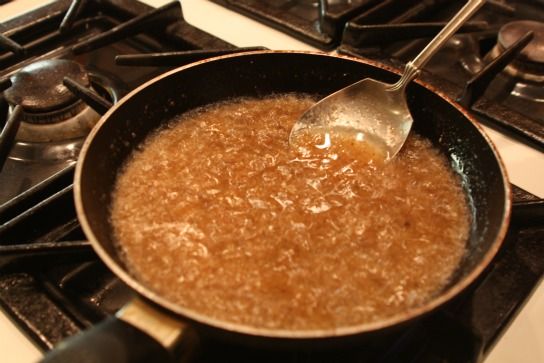 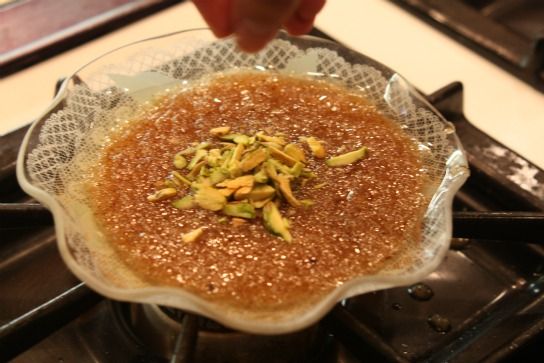 And here's a video of Making the Sooji Ka Halwa:

Le Creuset has generously offered to reward our Big Feasters for all their hard work, and as our third Big Feast, Liyna and Anum will win, in the color of their choice (flame, cherry, fennel, Caribbean, dune, Dijon, or Marseille): a 5-quart braiser, a 4-quart stainless saucepan, and a large serving platter. Pitch us your Big Feast at [email protected] for a chance to win up to $500 in Le Creuset booty.

sonalison May 15, 2012
Your mother's day hales reminds me of my Bengali mom's halwa she'd make on special occasions! I cant wait to make it when I am missing home.

cookingProf May 14, 2012
The very night of this post, we had no time for dinner before heading out for a performance and needed a snack. I made Sooji Ka Halwa and we had it with lavash bread. What a treat! Also, I read each of your posts with great anticipation and enthusiasm. I admire you both for how you pulled this audacious feast together like pros which you admittedly were not! You are now, congratulations!
Author Comment

Anum&Liyna May 15, 2012
cookingProf, what a novel combo of lavash bread and sooji ka halwa -- sounds delicious!! Thank you for your lovely compliments and for following us on our journey; we think we have the confidence to put on more feasts in the future! :)

shayma May 12, 2012
what a lovely dish youre making- reminds me of home, too. x shayma
Author Comment

susan G. May 10, 2012
I hope we get to see your grandmother in the final day.
Author Comment

Anum&Liyna May 11, 2012
Thanks, susan g - You're so sweet! We really wanted her to come, but unfortunately she wasn't able to make it.