All week, we'll be featuring Sara Franklin, Neftali Duran, and Sally Ekus as they plan and throw an Oaxacan-style goat roast.

Today: Sara tells us all about the Big Day! Check out their previous posts, The Year of the Goat, Building the Fire Pit, and Prepare Yourself. 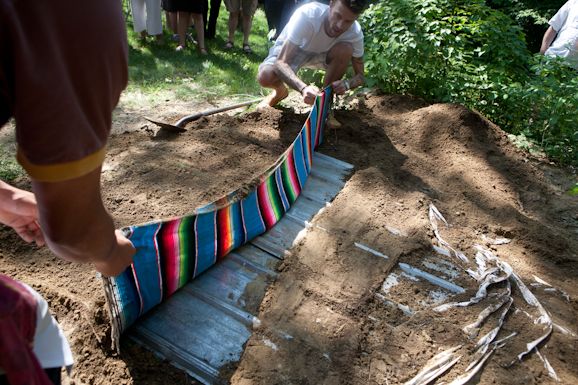 In the days leading up to the party, Sally sometimes joked, “This is practically going to be a wedding! Now all we need is a couple to get married.” But there were moments in the lead-up to our feast in which I wasn’t sure whether the occasion was fit for folks to tie the knot, or whether I was just fit to be tied.

I admit, at times the careful wording of the invitation we sent out to friends and colleagues, the planning calls (there were conference calls, no joke —all three of us live in different towns and have erratic work schedules) and countless emails, the seemingly endless errands to pick up another dozen limes or yet another table, the decorations, and most of all, the volume of food and booze, made me crazy (I could have taken a note from wedding planners and enlisted a 3-ring binder for organization and the soothing effects a good massage). But once the party time arrived, after all the fussing, there was nothing left to do but let it all unfold and relish the day. 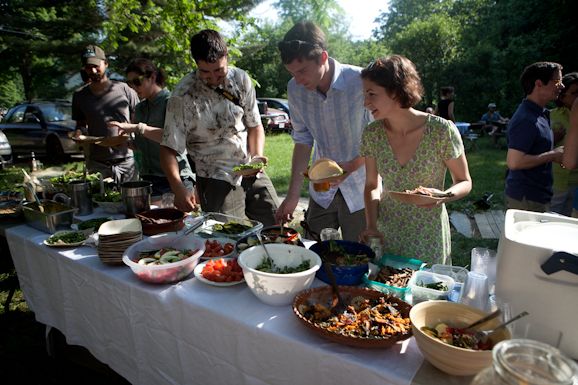 We had friends from all over the Northeast in attendance. Some had traveled up from New York City, others from Upstate and Boston. Many were local, too. Our crew included former professors, food writers, farmers, chefs, scholars, orchardists and TV personalities. And, of course, good appetites aplenty. The tables over which we had draped white linen quickly groaned under the weight of salads, sides and desserts our friends so generously added to the spread. 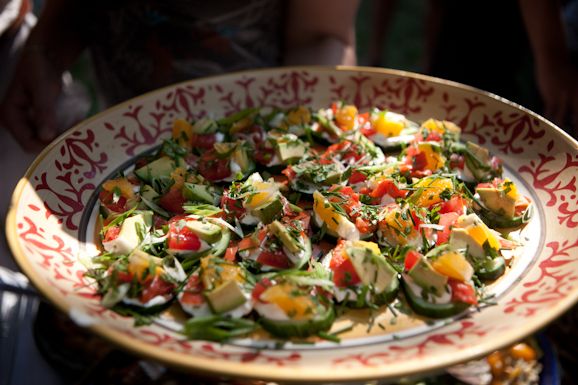 At about four, Nef, Emiliano and a chef friend began to shovel away the dirt over the pit. Our friends gathered around, cameras and phones at the ready to document the moment, as the boys pulled away the iron and Nef carefully climbed down into the pit to check the goat (which had been cooking for 7 hours). Not quite ready. The crowd dissipated, and went back to merrymaking, while Nef quickly set to grilling up chicken and pork for tacos for a first course. 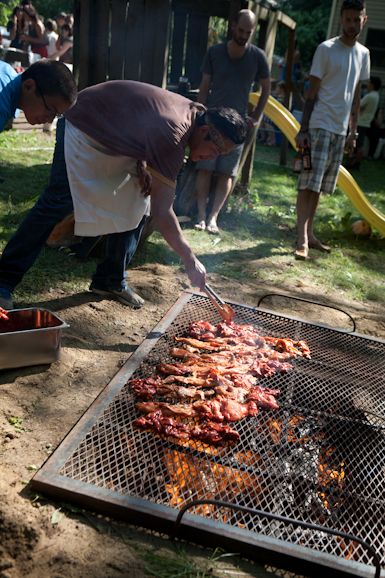 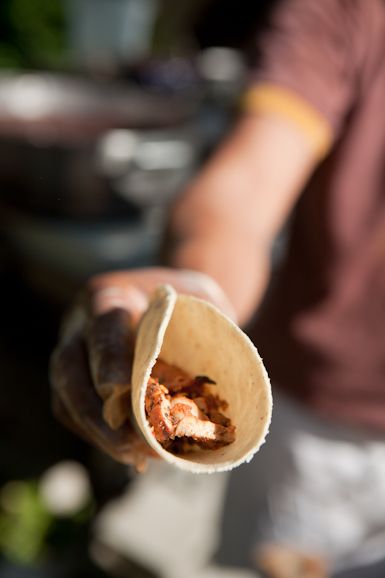 I went back inside to resume my post at the kitchen for a quick dish blitz and to start warming stacks of tortillas. I was lost in the meditation of rubbing dishes clean when, suddenly, it seemed quieter outside. The hostess in me became nervous. I stood on tiptoe and peeked out window. People had sat down. They were eating. Quiet, in such cases, is a very good sign. 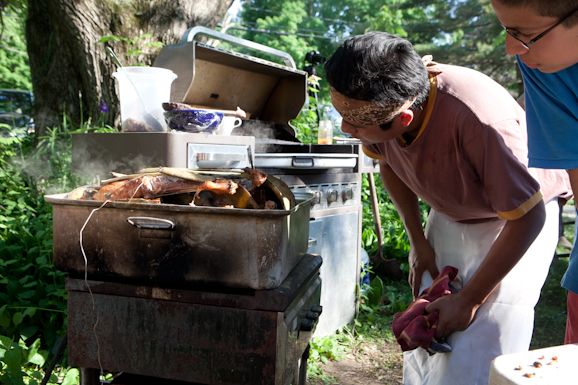 To say we ate well doesn’t even begin to describe Nef’s magic with meat and chilies and the outstanding contributions of our friends and families. Before long, everyone was bursting. But no one slowed down. There were too many good things to eat, and no one wanted to miss out. 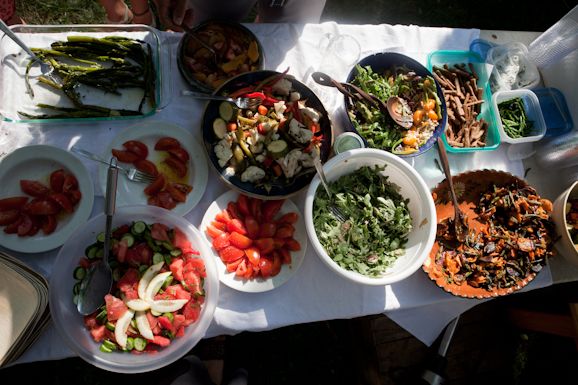 We uncorked more wine and tapped the second keg. Nef carved the goat and served it up with steaming plates of masita. And then people dug into the pies—Oh! My blessed friends! I owe an ode to the desserts you bake. I tasted an impeccable rhubarb tart from Sandy, slices of tangy pear ginger and peach blueberry pies from Dinah, and Virginia and Lisa’s strawberry rhubarb. There were so many others, but there was no way I could fit them all. By the look of the empty pie dishes just minutes after dessert was served, though, I can say with absolute certainty that each and every one impressed. Hopped up on sugar and sunshine, our friends’ kids chased the laying hens and broiler chickens with sticky, wanting fingers. 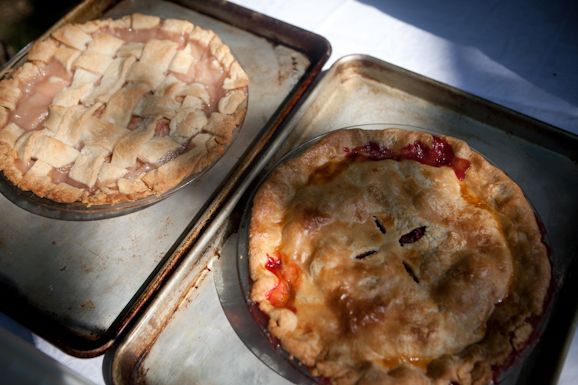 Our friend Ben had brought a beautiful bottle of Mezcal as a birthday gift for Nef. He uncorked it and poured a round. Standing around in a circle, we toasted the chef and his birthday, then toasted each other and a successful gathering. When the bottle was nearly empty, Nef dared himself to eat the scorpion from the bottom of the bottle. We gawked and “ewwwwed” as he crunched away on the creature’s chitin shell. 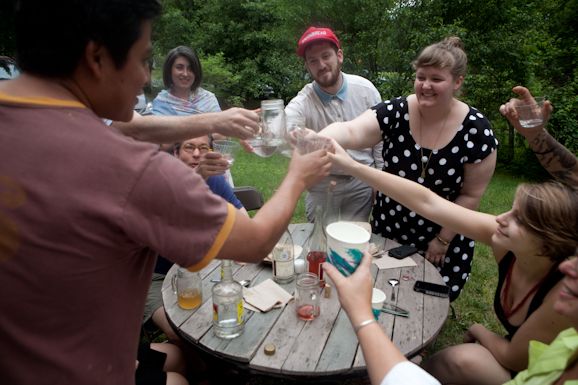 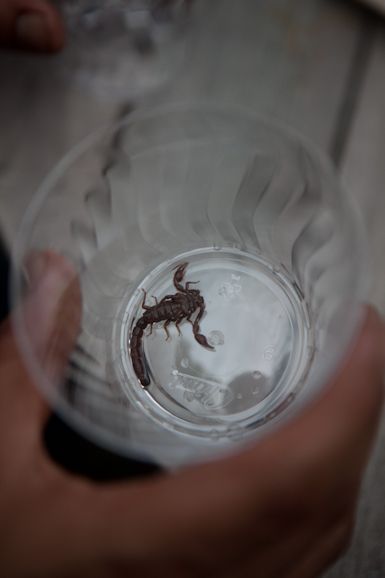 I finally found a seat on the cool grass, and stayed there. After a weekend of perpetual motion, Sally, Nef and I finally let our exhaustion overtake us. We poured ourselves a round of drinks, clinked glasses, and took it all in.

In what seemed like the blink of an eye, our friends with young ones begin to beg their leave, and more of our friends slowly trickled out after them. The sun set over the river behind the house and the mosquitoes began their twilight hum. 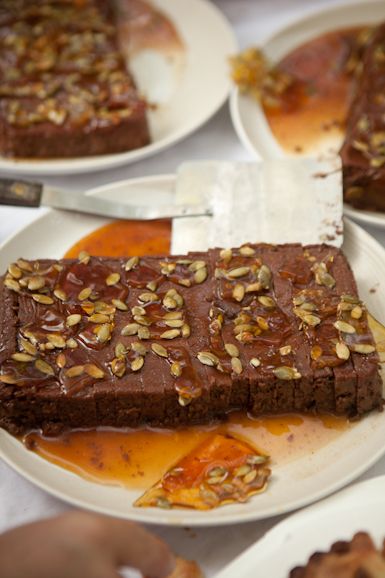 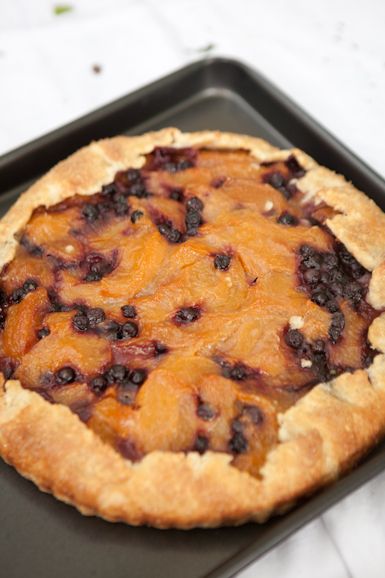 A small group of us remained, clustered tight around a table. We polished off another two rhubarb tarts and sipped Bourbon. We turned on the lights and lit the candles. After a couple of hours, we found ourselves—strangely—hungry again. And so we served up another round of goat.

There may not have been a wedding that day, but there was certainly an abundance of love to celebrate. Love of food, love of friends, love of hard kitchen work and a yen for adventure. The next morning, awoken from a deep, leaden sleep by the call of the chickens from their coop, I passed by the remnants of the night before. What I saw, though, wasn’t so much the dregs awaiting cleanup as a mess of memories taking shape, those of the of the best kind—sumptuous, messy, decadent, collectively-built and unpredictably joyous ones. 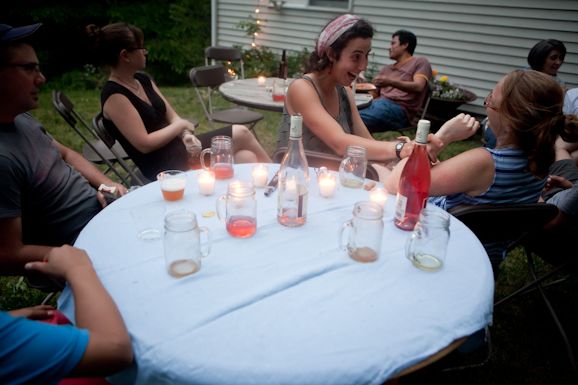 Kitchen B. June 19, 2012
What a sense of togetherness in bringingnit all together. The spread looks wonderful......happy birthday, belatedly to Nef and well done to ALL of you

Kitchen B. June 19, 2012
What a sense of togetherness in bringingnit all together. The spread looks wonderful......happy birthday, belatedly to Nef and well done to ALL of yoy

garlic&lemon June 18, 2012
An addition: in one of the pictures in an earlier post, the huge agave leaves were sticking up in the heated pit. For those who do not know, they were being heated up to soften them so they would wrap around the goat. Otherwise, they would break and not fold. This was not in the article, so I thought someone might want to know... Also, Neftali was PROBABLY wearing his OLD tennies stepping into the pit to put things in and take things out. Yes? Or else he would have had to buy a new pair after every feast.

garlic&lemon June 18, 2012
I have been fantasizing with friends for YEARS about doing this. We've talked about getting a group together to buy a Caja China so we could do a whole lechon (suckling pig). Then we could wheel it from house to house, depending on who's doing massive grilling. My neighbor a few blocks over was talking about digging a pit to roast a goat and my son volunteered to dig it for him, but then he backed down. All talk. This was a HUGE, fabulous undertaking. Congratulations for having the determination and joy-of-life to pull it off! You had my favorite agua fresca - tamarindo! Nothing better with rich grilled food.

aargersi June 18, 2012
Wow - what a GREAT party - everything looks absolutely amazing. Loved reading the process. I bet you slept for 2 days afterwards!!

Sadassa_Ulna June 15, 2012
Your party looks and sounds amazing. What a great Big Feast story. Can I ask what those beautiful canapes are?
Author Comment

Sara, N. June 15, 2012
We didn't make a single one of our sides! They are ALL thanks to our generous (and talented) friends, and for the most part, we don't know who brought what!

Midge June 15, 2012
An amazing feat! That was so much fun to read, I can only imagine what it was like being there.

fiveandspice June 15, 2012
Mind blowing! The feast sounds completely scrumptious! And what a wonderful bunch of friends to come and contribute so much.

Sasha (. June 15, 2012
Beautiful! I'm so gad you finally sat down and enjoyed yourself. I was worried when I read you were in the kitchen during the first course. There was love, indeed. Great job!