All week, we'll be featuring Sara Franklin, Neftali Duran, and Sally Ekus as they plan and throw a Oaxacan-style goat roast (for 60!).

Today: Sara brings us through the preparations for the Big Feast. Check out their previous posts, The Year of the Goat and Building the Fire Pit. 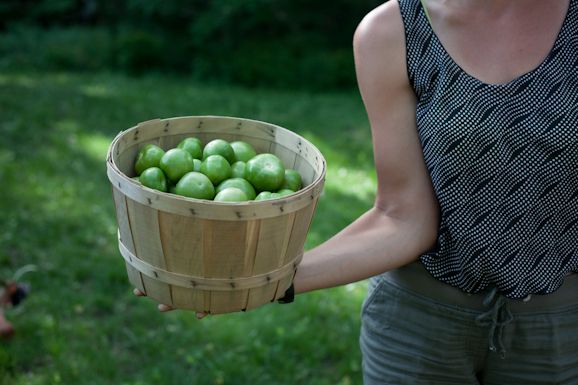 Getting ready to host more than sixty people is no joke. At least, it wasn’t for me. Making sure there were enough plates, glasses, and tables. Ensuring there was plenty of wine and beer, and also some virgin beverages for the kids and the abstinent. Neatening up the yard, calling all of our farmer friends to bring their market tents in case of rain, then calling them again to request market tables (because we ran out of serving space). And then … right. The food.

We could’ve made it easy on ourselves—but then, that wouldn’t have been our kind of fun. We wanted to go big. And traditional. And that meant about two days of solid food prep—after the ordering, cleaning, neatening, pick ups and last-minute grocery runs—before the eating could begin. 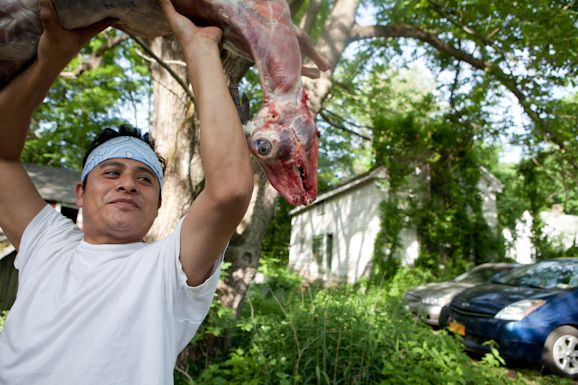 We had hoped to slaughter our goat ourselves in order to ensure best quality—and also in the interest of keeping all the odd bits and blood. But no sooner had we begun talking to a local goat farmer about placing an order for a whole animal that we ran into a snag.

He and his family were nervous about getting caught selling a live animal to us for slaughter. You see, the U.S.D.A. policy includes an impossibly complex list of stipulations for any commercial livestock slaughtering and butchering, no matter how small the operation or how close the farmer is to his or her customer. And so, reluctantly, we left our goat in a certified slaughterer’s hands and repeated again and again, “Please save everything.” 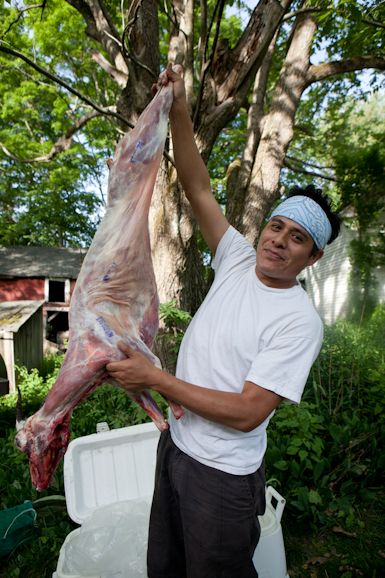 The Thursday night before the party found Sally, Nef and I sitting in Nef’s kitchen, planning the festa and sharing a simple spring supper. We were mid-conversation when Nef’s cell phone rang. It was our farmer. After just a moment, I watched Nef’s face fall as he shook his head, silently mouthing profanities. When he hung up a few minutes later, he was met with Sally’s and my expectant faces.

Saturday morning, Sally, Nef and I rendezvoused at the Greenfield Farmers Market (not an abnormal way to spend a Saturday for us—Nef sells his bread from El Jardin Bakery there, and a slew of our friends vend their produce there as well). After making the rounds and saying our hellos, we went over to our goat farmer’s tent. 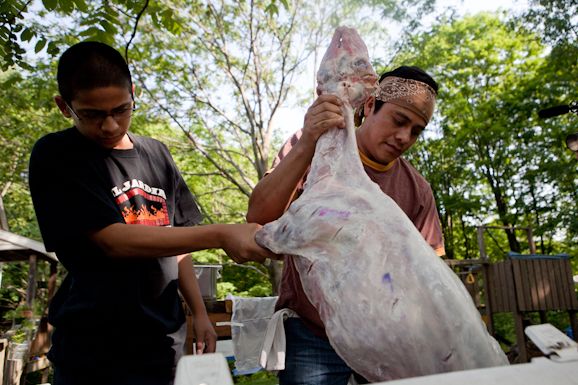 “How much did it weigh out to?” Nef asked.

“Bones and all?” asked the farmer.

I, again, watched Nef’s face melt into a grimace and a swear slip out under his breath. We had been promised a goat upwards of 50 pounds after all the skin and organs had been removed, and based on that weight, we had let our guest list had grow to sixty-five for Sunday afternoon. 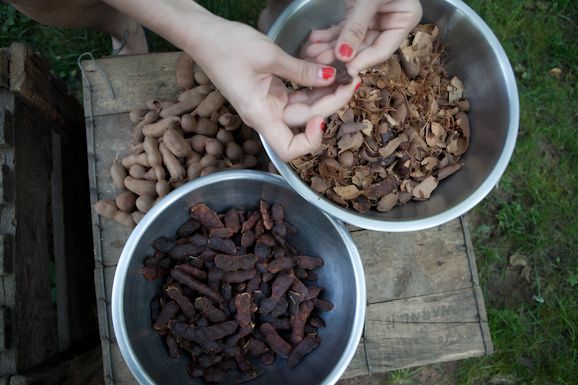 Discouraged but not disheartened, we packed our (small) animal into a cooler in the back of my car, loaded up on friends’ veggies and some flowers to decorate the lawn, and headed back to the house to tend to our preparations. My friend Jessie arrived, having valiantly driven up to Massachusetts (“It’s fine,” she promised, “I wanted an excuse to take a little road trip anyway”) after making a 7 am run to Corona, Queens for an order of fresh masa and tortillas from Tortilleria Nixtamal and a special delivery of enormous agave leaves (in which to wrap the goat), fresh tomatillos, and marinated pork for al pastor from our friend Bernardo’s incomparable Mexican grocery, Peach Market Inc.

With our booty sprawled across the kitchen and dining room, we set to work. A handful of eager friends showed up to help, and we gathered outside in the yard the hot May sunshine to sort several pounds of black beans, peel thirty heads of garlic, peel bags of tamarind and de-seed several bags of guajillo chilies, and pick through 40 pounds of dried corn donated by our friends Jonathan and Cheryl of Hungry Ghost Bread. 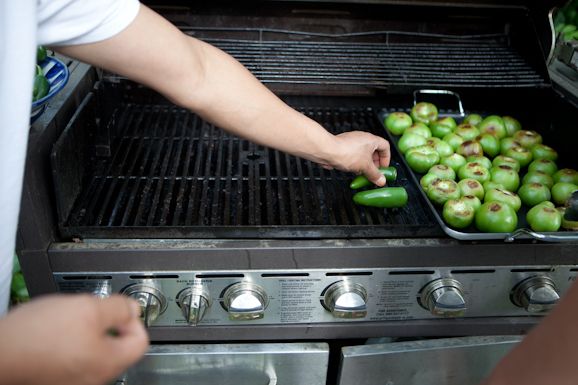 We fell into a gentle rhythm, moving slowly through our tasks—hands busy and minds free to wander. Our chickens roamed around and pecked curiously at dropped bits. Halfway through the afternoon, we took a break to sup on miso-glazed chicken and asparagus, both charred on the grill.

As the sun began to wane, we washed the goat carcass and set it to brine in a cooler filled with cold water and plenty of salt. Then we moved inside to get started on the salsas. 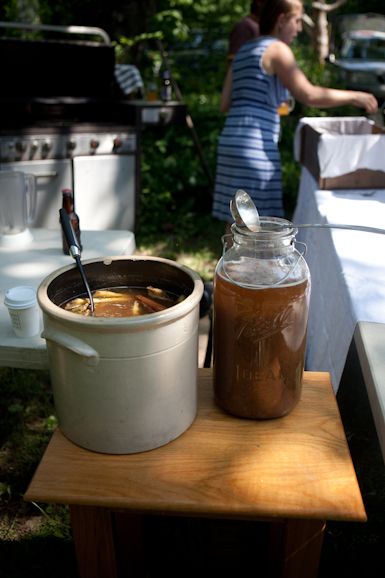 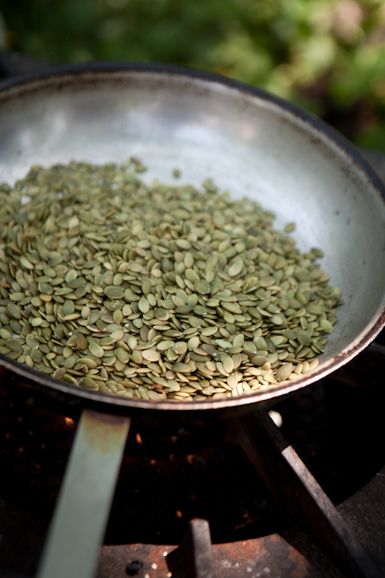 A pitcher of caipirinhas fortified us through the evening as we juiced, simmered, chopped, whizzed, strained and poured. We reconstituted guajillos for the goat rub and charred habaneros. When the chilies de arbol went into the blender for their pulverizing, our eyes burned merely from sharing the kitchen with the fiery things (get the recipe for Salsa de Chile de Arbol here).

The day slipped away, along with our energy, and finally we called it quits knowing we had a long Sunday ahead of us. 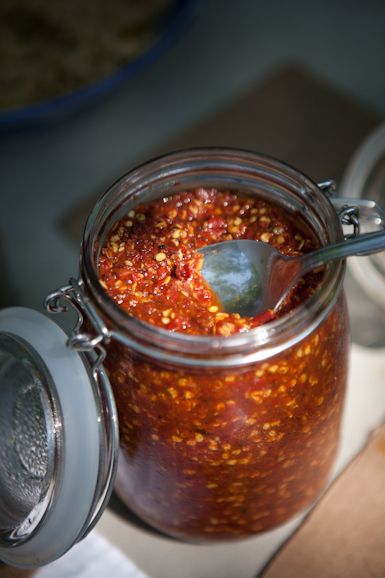 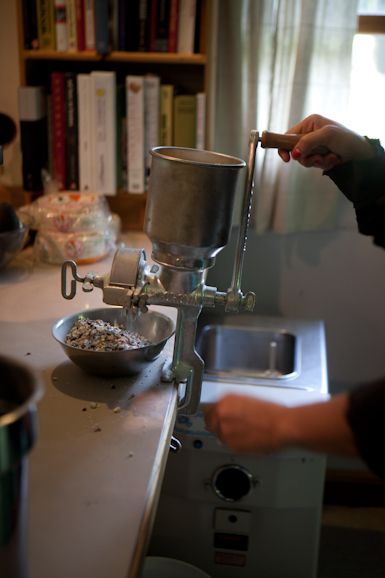 The next morning at 4:30 am, Nef was up like a shot to build a fire. Unable to fall back asleep, I padded downstairs soon after, stumbling out to the back yard to find Nef sitting on his haunches watching over a blaze of orange, the sharp smell of wood smoke curling around the damp green of the spring earth. I helped him heap a few logs onto the flames, then went inside to make myself useful with the coffee pot.

When the fire was hot and steady, we ran one last round of errands, retrieving the goat from our friends’ walk-in cooler at The Kitchen Garden Farm along with kegs of beer made with local malt from our friends Andrea and Chris. En route back to the farm, we retrieved some of Nef’s bread and a bottle of milk for French toast to tide us over through the morning. 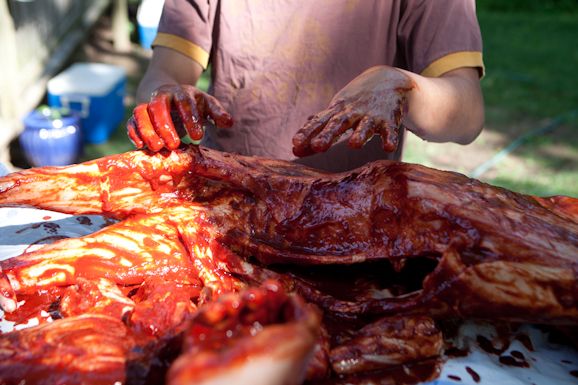 First order of business was the goat. We rubbed him down with a hefty coating of guajillo paste, scattered dried aguacate (avocado) leaves across his flank, and then wrapped him in the elegant curve of the agave leaves. Meanwhile, a friend cracked round after round of dried corn in a hand mill for the masita, which went into an enormous pot along with manteca (pork lard), herbs and more guajillo paste. Then the whole mess went into the pit, which Nef and Emiliano covered with sheets of corrugated iron, old blankets, and several inches of dirt. 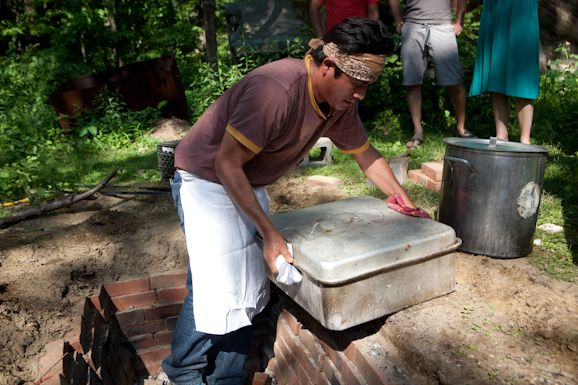 What happened between 7 am and 2 o’clock or so, when our friends began to show up in droves, is a blur. All I know is none of us stopped moving. I manned the kitchen sink, washing the endless parade of dishes and mopping up spills on the floor. Sally bustled around outside. Our photographer, Ilana, arrived with the base for a spicy chocolate ice cream she had prepared, and brought along her friend, Rose, an avid cook and intrepid eater who toted a vat of homemade Mexican pickles. Molly O’Neill showed up, jazzed to include Nef and his Oaxacan-inspired backyard kitchen in her latest project. Nef and his son, Emiliano, didn’t budge from their posts at the prep station they had set up outside, where they whipped up a pipian—the term used for pepita (sunflower seeds)- based sauces—embellished by a dash of mescal; a sesame seed topping; a mellow salsa of roasted jalapenos and plenty of blackened garlic (get the recipe); and a smooth and tangy guacamole de taqueria, elegantly garnished with avocado pits. They boiled tamarindo for agua fresca, and tended to an enormous cauldron of Nef’s trademark black bean puree.

At some point, when I looked up from the kitchen sink, my hands immersed in hot soapy water, I saw that a small circle of guests had circled tightly around Nef, beers in hand, to watch him in action. The party had begun. (See the whole feast tomorrow morning on FOOD52!) 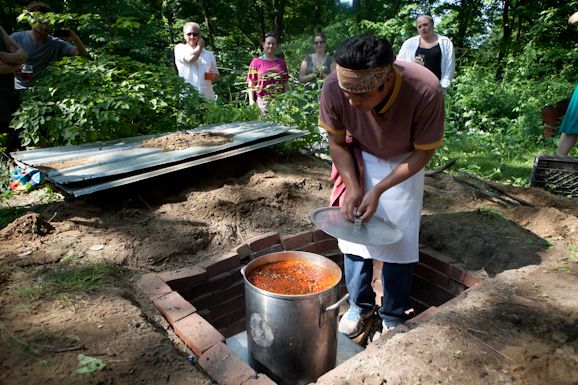 swobohe June 19, 2012
I'm trying to understand the mechanics here, but I it l don't quite get iooks like:

Large open pot with ? inside, looks too big to put the top on the pit, what is it and how do you seal it?

MrsWheelbarrow June 15, 2012
This is an amazing undertaking and such a mouthwatering feast. Did I mention I have family in Western Massachusetts? There's always room for one more, right?

Burnt O. June 14, 2012
THAT is a LOT of work!! This feast contest has been so inspiring and fascinating - it should be it's own chapter in the next cookbook along with the recipes for each feast.

SKK June 14, 2012
I am mesmerized with this story! Also inspired by your strong, talented, supportive community! This wonderful meal is definitely taking a village.

aargersi June 14, 2012
Wow - this is seriously impressive - what an undertaking! WE all want to come to the next one!!!