Fava beans aren't afraid to give you a hard time -- what other vegetable needs to be shelled twice? But they're worth it. Their intensely green pods are used in spring dishes all over the Mediterranean world, from Italy (in the spring stew la vignarola) to Iran (blanched and tossed with angelica). FOOD52er innoabrd's Besara -- think of it as Egyptian hummus -- is another classic preparation.

As you blanch and peel your fava beans to tender perfection, here's more about them, both inside and out. 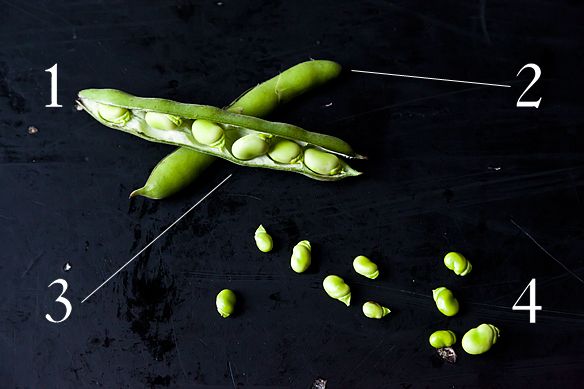 1. Triplets or Duedecuplets: Depending on variety, each fava bean pod holds between 3 and 12 nestled-together beans. To get inside, "string" the pods like you would a snap pea, by snapping off the stem and pulling down across the pod.

2. Easy Being Green: The outer shell of a fava bean should be velvety and smooth, and evenly green. Look for pods with the stem end attached -- that's a good sign that they were picked at full maturity, rather than being clipped from the branch. You may see black spots on some fava bean pods which, according to the University of California Specialty and Minor Crops Handbook, is caused by fungus brought about by wet growing seasons. Don't sweat it -- the  beans inside are perfectly healthy.

3. Buying by Touch: At market, feel for firm fava bean pods with even spacing. Loose pods indicate that the beans aren't fully mature, or that they fell victim to aphids!

4. Favism: As fava beans mature, they develop higher levels of tyramine, an amino acid. According to the UC Davis Small Farm program, if you have a hereditary enzyme deficiency called favism, you may get sick when eating raw or undercooked favas. Play it safe -- blanch your beans! 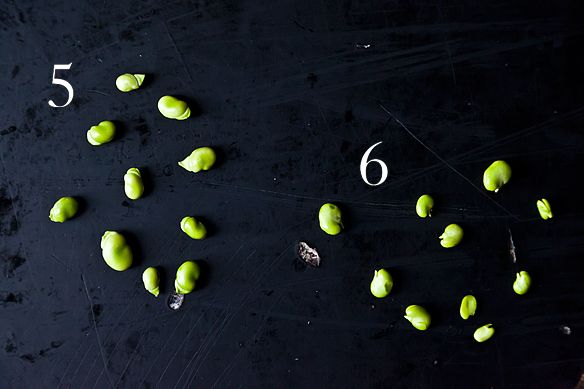 5. Shelling, Twice: Once you pop fava beans out of their pods, you're halfway there: the beans are covered further by a pale green membrance that protects the brighter green bean inside. You can gently score this shell with your thumb and peel it off -- if the beans are very large, this is made much easier by first blanching the beans and letting them cool in an ice bath.

6. Fresh or Dry: Finally, the fava beans themselves! Eaten fresh, they have a buttery, green taste and can be used for everything from crostini to traditional Iranian baghali polo -- rice steamed with dill and fava beans. They can also be blanched and frozen, or dried and stored just like any other dried bean. Many older recipes recommend boiling for upwards of 25 minutes -- we recommend cooking them until tender, just a few minutes.

Ready to start cooking? Most recipes -- like this pea shoot salad and these braised beef shanks -- draw on fava beans themselves, but you can also grill and eat the pods whole!

Isabell N. January 5, 2013
I harvested lot's of fava beans, dried.....came across your article while trying to research if I have to peel the dry beans, lot's of conflicting information about this out on the web. I thought you have to know coming from an Iranian Family, so let me ask you once they are dried in the pod, harvested and shelled, do I need to peel the outer skin of the dry Fava Bean, soaking them first or can I just make a soap without that procedure. lol I have been researching for an hour and I get 3 different takes on it.....I am confused

Roberta S. January 29, 2014
I have dried, shelled fava beans that I want to use up and they have some brown spots on them. Are they still good?

SmallServings June 29, 2012
Fava beans have always looked a little daunting to me but you broke it down perfectly! I can't wait to pick some up tomorrow at the produce market and try them. More importantly, my kids will love helping and then sampling (and hopefully falling in love with them!).

flowercityfoodie June 29, 2012
Thanks for the information about favas! My CSA box had favas in it yesterday and I wasn't sure how to use them. I think I'm going to saute them and use them as a topping on crostini (maybe with some chevre).