Today, we're re-running one of our favorite old Jenny columns while she works on finishing her new book, with new photos to boot! 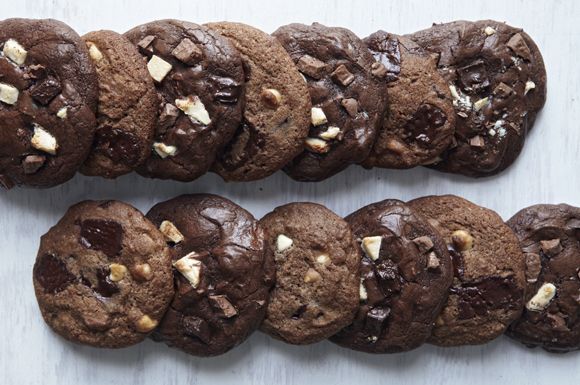 I don’t have a lot of goals and fantasies pertaining to my life as a parent, but I confess to imagining myself as that mom who makes homemade desserts mid-week. In reality, that usually involves opening a container of ice cream. But I can be convinced to whip up a cake or somesuch on a Wednesday, which does, in its little way, seem to make up for my screaming at members of my household about toothpaste in the sink.

Cookies seem made for weeknight baking, with their relatively few steps, short baking time and willingness to be misshapen. After careful perusal of the many offered on food52, two really caught my eye, both because they were chocolate (kid-pleasing) and because they seemed easy and fast, provided you have an ample amount of chocolate in the pantry. (A prerequisite for mid-week baking, and maybe for civilized life.)

Isn’t it funny how we feel compelled to use the language of violence when discussing chocolate? On this site alone I could make a cake that is daring, cookies that force me into madness, or some that threaten me. I chose the latter two.

This cookie-thon caused a great deal of excitement in my kitchen, which I will detail in a moment. But first, a few more words about chocolate.

First, what really is the difference between bittersweet and semi sweet? Not much as it turns out, though bittersweet seems to have more cocoa solids and less sugar than its semi-sweet cousin. I wouldn’t get too worked up about it if you only have one or the other on hand.

On the flip side, most recipes that call for cocoa powder, I note, do not state whether you need Dutch or non-Dutch processed. This actually matters because they do not behave in equal fashion with leavening agents.

Natural cocoa, otherwise known as non-alkalized or non-Dutch cocoa, is often called for in recipes that require baking soda (itself an alkali), which provides the leavening that causes stuff to rise in the oven. Dutch processed cocoa tends to get matched with baking powder. If this topic now obsesses you, click here for oodles more info.

But either way friends, in 2010 let’s all do Rose Levy Beranbaum proud and please specify.

So, back to the baking sheets: Triple Chocolate Madness Cookies require a lot of chocolate on hand -- four types of solid and some cocoa powder. The recipe also asks for cake flour, which is unusual for cookies. As I mixed it all up --  a procedure that took around 10 minutes, including chocolate chopping -- I began to worry a bit. The batter looked like frosting, frankly, probably due to low doses of flour and butter. So I put it in the fridge for 5 minutes before shaping my cookies, just enough time to clean up my entire mess.

Triple Threat Cookies require some malt on hand, so I begged some off the waitress at The Counter in Santa Monica, my favorite hamburger place. But we are chopping far less chocolate here, so this becomes the slightly faster choice.

Preliminary results: Triple Chocolate Madness had a soft, almost brownie like quality and a rich chocolate flavor. On the Triple Threat front, I initally felt she called for too much salt -- a full teaspoon -- but I later discovered that it settled in nicely with the sweetness of it all. The interplay of malt and white chocolate is lovely, but you have to be a malt person. Her oven temperature of 375 resulted in well done treats; my next batches, shaped slightly smaller and cooked at 325, were better.

Next, I had the requisite taste off. My kids loved both, but honestly I had to dismiss that. I love my children madly, but when it comes to large quantities of chocolate at 9 in the morning, I am not expecting discernment.

So I had two adult men weigh in. One came over in something resembling pajamas when he heard cookies were in the oven, and quickly proclaimed the Madness batch “more special in texture.” I think that could be right. But my husband was beguiled by the sheer richness of the Threats, made so by the addition of sour cream.

So you really can’t go wrong -- Madness if you like brownie-type cookies, Triple Threat for a crisp, malty cookie. In both cases, you can freeze the dough. That would mean the easiest mid-week baking yet. 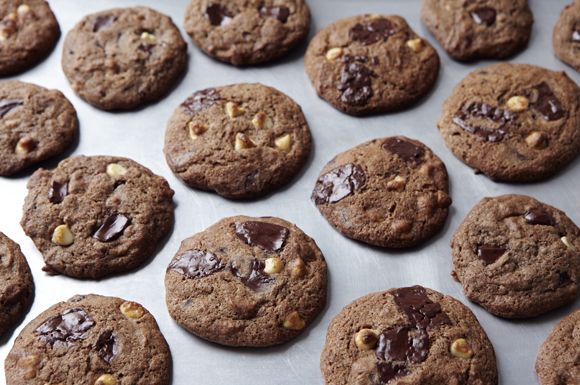 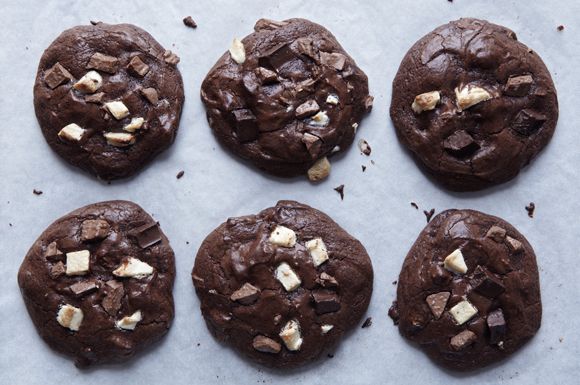 See the recipe (and save and print it) here.
Photos by Joseph De Leo

TheWimpyVegetarian January 19, 2010
I did a chocolate tasting for a group recently and have a lot of chocolate left over (what a shaaaame). This looks like a great way to use some of it. Love the tasting contest idea.

Kelsey B. January 18, 2010
I do all my baking mid-week, too - though sometimes I do a little on Sunday afternoon. I love the taste-off you did, and the results. Thanks for the tips regarding the baking times, it is interesting to see how that small tweak can affect the entire cookie.

mrslarkin January 18, 2010
Forget madness & threats, this is sheer evil. Oh and btw, runaway spoon, you've got the cutest logo i've ever seen in my LIFE!