Summer squash -- from zucchini to pattypans -- get a bad rap. They grow like crazy (what home gardener hasn't discovered a baseball bat-sized squash hiding in their garden in late August?) and produce squash for as long as the weather holds, which means the harvest keeps on coming. Jokes about ditching baskets of zucchini on your hapless neighbors' doorsteps aside, there's a lot to love about the much-maligned cucurbit.

Whether your garden has you drowning in squash or you snap it up at the farmers' market, today we're talking all about summer squash: the many different types, how to help them reproduce, how to maximize your squash blossom harvest, and more. 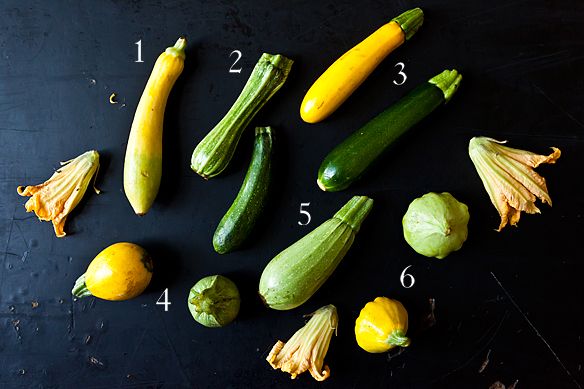 We found as many varieties of summer squash as we could at the farmers' market one Monday. We've covered most of the bases, but there are many more species where these came from!

1. Zephyr - With a pale green bottom half, Zephyr squash are the gorgeously colored cousins of the more common Yellow Crookneck.

3. Golden and Black - When you think of "zucchini," these plain-old yellow and green squash are probably what first springs to mind. Cut thinly and layered in ratatouille, they're classic, dependable, and familiar.

4. Floridor/Geode/Eight Ball - These yellow, light green, and dark green (respectively) squash all share a spherical shape. This does mean that they maximize their inner volume, so be sure to pick these very young -- the insides become tough and woody quickly.

6. Pattypan - The scalloped edges of these squash are adorable, but can be difficult to chop up for cooking. Try buying them small and roasting them whole to make the most of their pretty shape.

First up: why do summer squash grow so quickly and become so big? Think of it this way: to a plant, its only purpose is to propagate its own seeds. To give its seeds time to fully mature and dry out, a squash grows larger and larger, its meat grows woody as the plant's energy is pumped into the seeds, and its peel becomes thick and tough to keep the squash safe as the seeds mature. Meanwhile, we humans like to eat squash when it's still young -- the flesh is tender, the seeds are barely developed, and the skin is thin enough to cut with a brush of a fingernail.

If you've never tried young summer squash -- and I'm talking baby summer squash, from 3 to 5 inches in length and not much thicker than a pencil -- you owe it to yourself to try them at least once. In her excellent book of essays Home Cooking, Laurie Colwin writes about the superior taste and texture of young zucchini, which she says is so good you can serve it simply steamed without even salt. 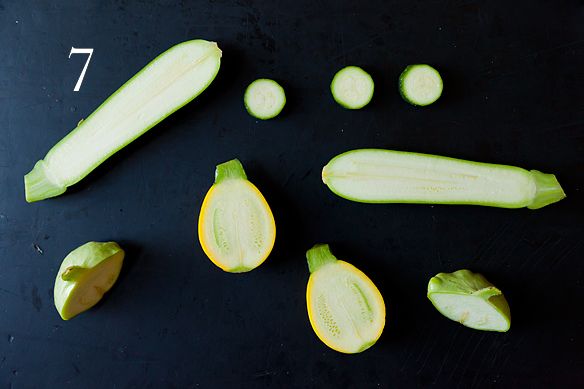 7. Chopping Block - How you chop up a summer squash depends on its shape. We love a thin lengthwise slice for Zucchini Carpaccio, but coins increase surface area (and are easier to eat!) for a quick saute or turn on the grill. The thickness matters, too: thinly is served raw or marinated, cut into planks to hold up to cooking. If the seeds in your squash are too big, scoop them out with a spoon like you would for a cucumber.

And now, a short interlude on plant reproduction!

The Birds, the Bees, and Hand-Pollination
Summer squash are pollinated by bees that carry the pollen from male flowers to the stigma of female flowers. So what do you do if you live in a city, where the bees are few and far between? Or if you're growing mutliple kinds of squash and don't want them to cross-pollinate? What you do is get in there and help your summer squash have sex by hand. Think of yourself as a vegetable fertility doctor.

First, an explanation of the latter reason: summer squash are like dogs (!) and can reproduce between varieties in the same species (but not the same family — squash and cucumbers and melons are all cucurbits but they can’t cross-pollinate). While you probably (but not always) won’t be able to tell when, say, a Costata Romanesco swaps pollen with a Zephyr, if you save the seeds of the subsequent squash and plant them the next year it’s likely that the miscegenated second-generation squash will look funny or grow differently. This is relevant if you practice seed-saving, or if you don’t want to risk having funny-looking squash — at the farm where I worked, we hand-pollinated for both reasons (which involved brushing away the bees while hand-pollinating and tying the blossoms shut so they couldn’t get back in).

So! For the former reason: female squash flowers have a 2-3 inch proto-squash connecting the flower to the rest of the plant, and male squash flowers do not. (I know -- not the way you expected it to be, right?) To hand-pollinate, cut away one of the boy flowers at the stem and gently rip away its yellow flower petals to expose the sticky inside stamen. Using that (it’s a flower penis!), poke around inside the female flowers to rub pollen on the stigma. That does it: now the tiny squash on the girl flower can start growing into a squash baby.

What makes this slightly more complicated is that you have to pollinate the females when their flowers are open, which only happens in the early morning -- and not just that, but for best results you should catch newly developed girl flowers on their first open day. Otherwise the baby squash will wilt and shrivel along with the lady flowers. (Of all the places to make jokes comparing squash reproduction to the human kind, this one is probably the saddest.)

To encourage flower production and growth, it’s best to cut away (and eat!) all the male squash flowers that you don’t use for pollination, leaving the pollinated girl ones to grow squash. 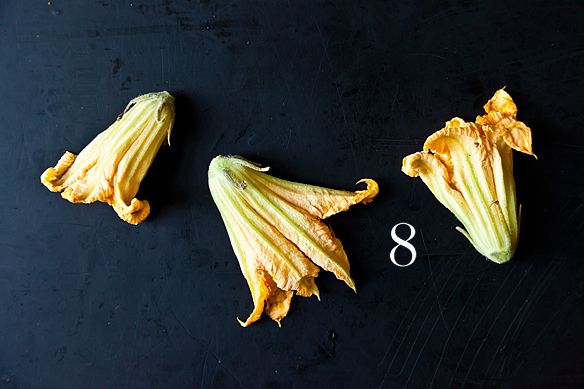 8. All the Pretty Flowers - The payback for finding enormous squash hiding in your garden is that you also get squash blossoms, which are edible. Their slightly bitter, tender, vegetal taste is perfect for frying, simmering into soup, or stuffing with cheese. As we saw above, all male squash blossoms should be harvested and eaten -- and the more you trim the plants of squash and flowers, the more abundantly they will reproduce. It's also common for squash plants to bloom a higher proportion of male than female flowers when first starting out -- simply trim them all off (saving one for hand pollination!) and wait for the females to appear.

With just a little bit of care, your zucchini plant (or plants, but honestly even one will have you in squash for the summer) will be performing at maximum capacity. Harvest squash and flowers every morning -- they'll keep in the fridge loosely wrapped for a few days. If the plant start to produce too many leaves, or very large ones, don't be afraid to cut them back! This will drive more of the plant's energy into squash production. And, always, don't be afraid to put that yard-long zucchini you found hulking at the back of the garden plot straight into the compost. There's plenty more where it came from, after all.

In direct response to your garden's needs, there are an abundance of zucchini and summer squash recipes on FOOD52. This Hotline thread -- "Help! Zucchinis are taking over!" -- is another great place to look, and we have 9 new ways to use zucchini, too. Looking for where to buy good summer squash? Use Real Time Farms to find farmers' markets selling zucchini near you!

LoisonMaui August 18, 2012
Nozlee, you have a gift for writing interesting articles. I read with much amusement your article. I got to it because I follow Food 52 for recipes as my husband and I are home cooks too. Well...the little comment that said...(For more on zucchini's antics, put down -- or throw away -- Fifty Shades of Grey and read last week's Down & Dirty.). I did and I can say I loved it. I have a friend here on Maui that has his own home garden and into this type of caring for plants. I can't wait to forward it to him. I'll look for you and your articles again. Lois

Miachel P. August 12, 2012
This is great! Was wondering about these squash flowers I recently gathered.

Panfusine August 12, 2012
I read somewhere that squashes were the proverbial 'sluts' of the vegetable patch!

Kristen M. August 10, 2012
This is amazing -- I feel almost embarrassed for zucchini now that I know so much about its sex life.