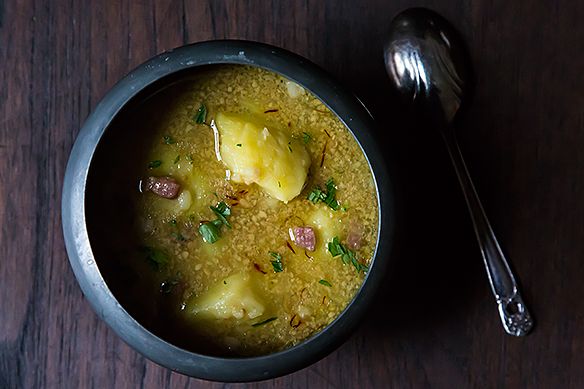 Ruggedly handsome and mysterious, this is a potato soup that leaves the cock-a-leekies and chowders of the world to quietly play cards, while it goes traveling solo through Andalucia on a moped.

Food52er EmilyC, who tipped me off to this recipe, said, "It's the most beguiling, delicious potato soup I've ever made or eaten." Luisa Weiss of The Wednesday Chef called it the sexiest. 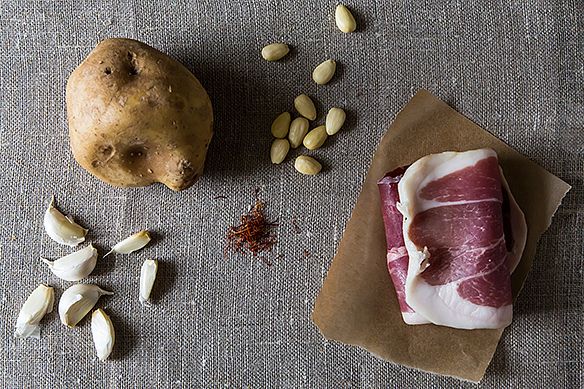 It comes from The New Spanish Table by Anya von Bremzen, who seems to publish an eye-opening book on another corner of the world every few years, win a James Beard award, and, in her down time, write for Travel & Leisure and Food & Wine.

As EmilyC pointed out to me, the most intriguing feature of the soup is this: "It's thickened not by roux or cream but by fried and finely ground almonds." Toasting almonds with garlic and blitzing it all in a food processor is a thrilling, genius way to enhance potato soup, but the fun doesn't stop there. 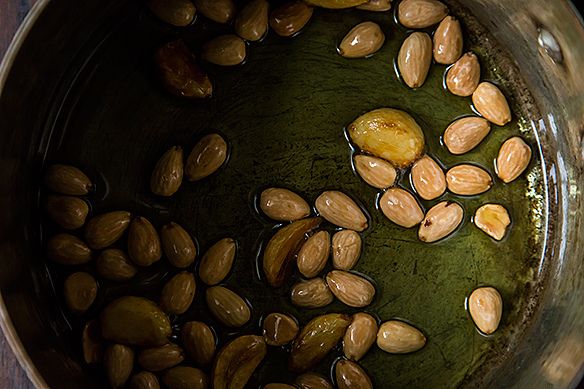 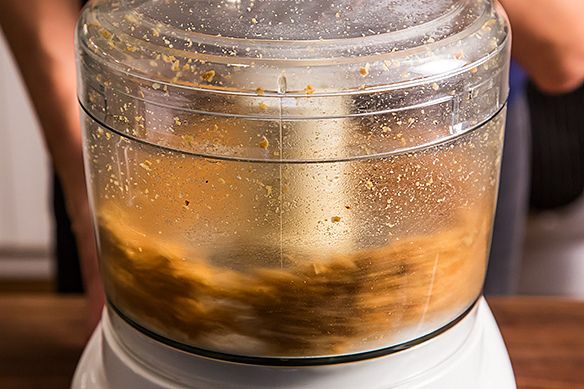 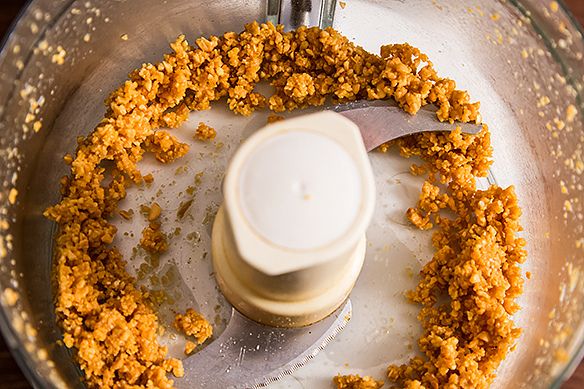 A modest amount of diced Serrano ham (or prosciutto) and a pinch of saffron go a long way, adding a luxurious gloss to what is otherwise a peasant stew. (Ask the person working the deli counter to give you a slice of either ham 1/4-inch thick. Or a nub from the end, if they have it.) 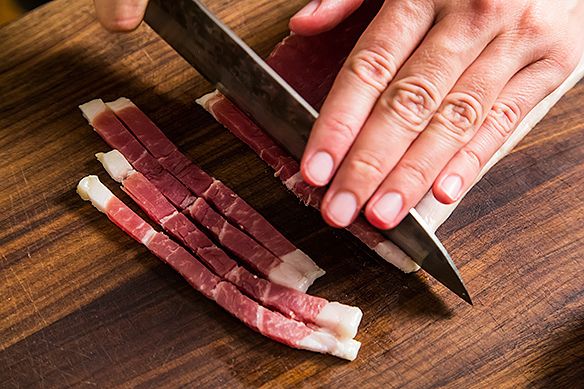 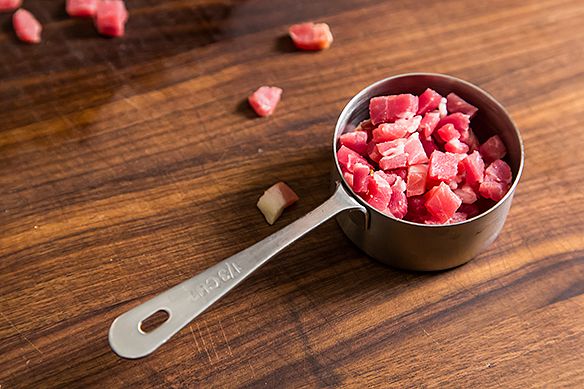 The ham, saffron, potatoes, stock, and most (but not all!) of the almonds and garlic bubble together for half an hour, until about half the potatoes have melted into the broth. The rest of the ragged chunks will have drunk up the saffron and garlic by now. You can smash some up with the back of your spoon to make it creamier, or leave it as chunky as you like. 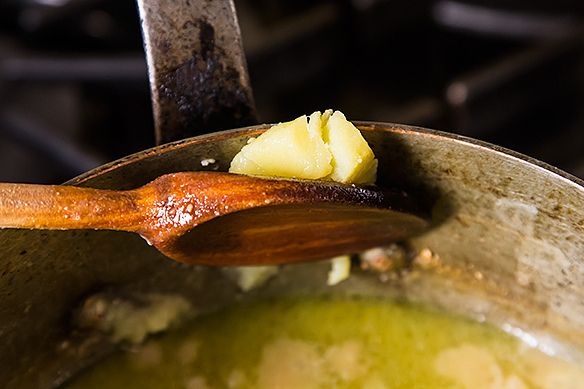 Now, just when you think it's almost too savory, too rich with almond-y oil and ham runoff, you take that reserved handful of ground almonds and quickly pickle it with some sherry vinegar. Stir that in, add some parsley, and you've got a soup you'll keep eating till it's gone, cozy but bright in every spoonful. 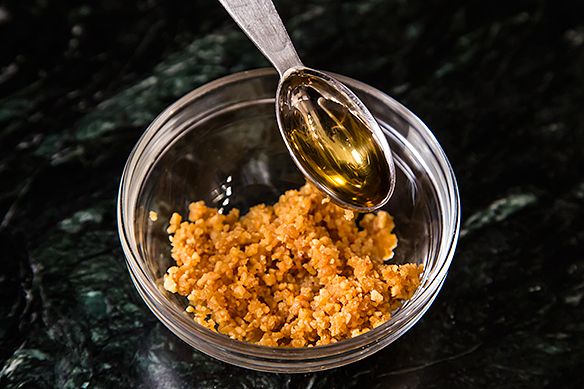 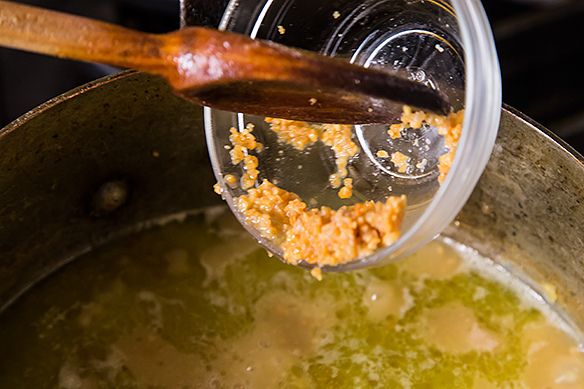 The texture is equally complex. Those almond bits that have been simmering with the soup for the duration are softened and plumped; the last-minute ones a still-crunchy carrier for the vinegar. The potatoes, like butter. If you wanted an unobstructed, smooth soup, you made the wrong choice. If you wanted a soup that's more Michael K. Williams than Michael Bublé, you're in for a treat. (For soup à la Bublé, try this. Or this.)

Yes, there are a few puddles of olive oil on the top of the soup, which you may not be accustomed to -- skim them off if you want. Or don't.

Ladle it up, pass it around, and let winter's shackles fall away. 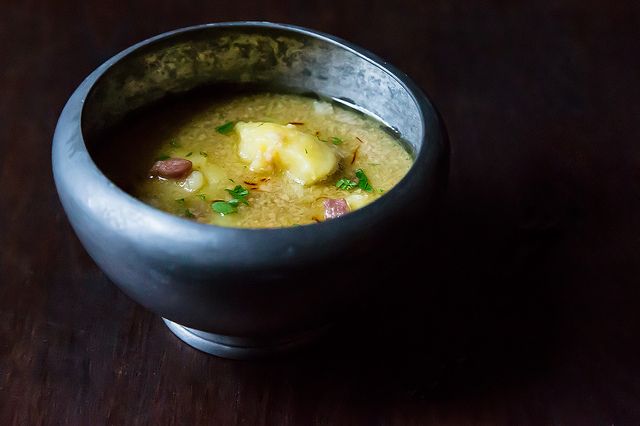 Serves 4 as an appetizer

rita P. December 2, 2012
Hi Kristen,
I am making your adaptation of Bremzen's Potato Soup with Fried Almonds with intentions of taking as a gift to a friend (who doesn't cook) who has of town company and wondering if i should save step 5 (adding sherry, almond mixture, and parsley) for her to do when she heats it up to serve.... or is it just as good either way? Thanks! Rita

wcl November 18, 2012
this really is a spectacular soup. the few ingredients come together in unexpected ways and produce a wonderfully complex and somehow familiar "comfort food" dish. i used some homemade dry cured bacon instead of serrano (its what i had). cutting the potatoes the way you suggest is very important as those thin edges break down into the soup and the remaining chunks start to resemble dumplings (both in their irregular shape and in texture and taste).
beautiful !!!

WaterBoiler October 29, 2012
Made this in my tiny Manhattan apartment on Saturday Night before Hurricane Sandy and Andrew Cuomo shut down public transport. Was absolutely delicious and was supposed to last for the BF and I over the next few days. He made a special trip in on Sunday just to take his half back to Queens. It was that good.
Author Comment

ATG117 October 23, 2012
I'm going to go the vegetarian route and leave out the ham. Given this, would you say the saffron is absolutely necessary? I usually don't keep it on hand. Is there something I should sub for either or?
Author Comment

Kristen M. October 24, 2012
Not absolutely necessary -- there's lots of other flavor and richness going on here. Just don't hesitate to tweak it to taste as you go.

ATG117 October 25, 2012
Thanks! I may make a smoked paprika oil to drizzle. I'll see how things come together. I love the idea of the almonds in here. Can't wait.

Foodiewithalife October 22, 2012
Humble ingredients yield magnificent results in soups. I just made a potato, leek, bacon, white bean soup that warmed my soul. Soup is so magical! Thanks for this idea Kristen.

DottieM October 21, 2012
What would you serve with this awesome sounding soup?
Author Comment

Kristen M. October 22, 2012
Definitely the best crusty bread you can get your hands on. With that and a simple salad like this, you're set: http://www.food52.com/recipes/13698_radish_and_escarole_salad_with_anchovy_vinaigrette

thisisalona October 21, 2012
hiya! would love to throw in another request on how to either make this vegetarian or sub in a different meat. i live in israel, so it's a bit challenging to find either ham or prosciutto. . . looks great, and especially for all those potatoes i get in my CSA. cheers
Author Comment

Kristen M. October 22, 2012
I think you can just skip the ham -- there's plenty of flavor from the garlic, almonds, and saffron, especially if you use a good homemade vegetable stock (or chicken, if that works). Chopped green or oil-cured black olives could be good too, but they might not look great.

judifree October 21, 2012
Can you make a suggestion about how to adapt this recipe for vegetarians?
Author Comment

Amber October 21, 2012
In addition to the great recipe, love the dark bowl. Where did you find it?
Author Comment

Kristen M. October 22, 2012
Amanda has been finding some amazing props for our photo shoots at an antique store in Long Island, including this one!

Joy (. October 21, 2012
This looks so warm and comforting! Will have to file away for a rainy day when I can get pork.

Fairmount_market October 20, 2012
This looks amazing. I can't wait to try it, and it's very timely because I was just thinking how boring potatoes were, but this looks like it could change my mind.

Francesca M. October 19, 2012
I made it tonight and it was wonderful. This one goes in the family recipe book. :)

Greenstuff October 18, 2012
It'll tell you that I'm a little weird--but I had all the ingredients for this one except the potatoes--yes, I stock saffron and Serrano ham but not potatoes... But they were easy to come by, and this soup is delicious! I think it's that late addition of sherry vinegar that really makes it. Just the potatoes, scooped from the broth, would make a great accompaniment to a meat course.

BecR October 18, 2012
This soup is fabulous! I've already made it twice! (Once last night, and as there were no leftovers in my house, I made it again for lunch today!) The second time, however, I ran out of saffron and swapped that out for a touch of smoked paprika and used a mild chicken sausage instead of the prosciutto and it was still amazing! I will definitely be adding this recipe to the top of my list of favorite soups!.... I think I will go for a second helping now.....yum!
Author Comment

erica's K. October 18, 2012
Yesterday I made this soup for lunch, it was delicious! And as beautiful as the photographs.

LLStone October 17, 2012
I'm betting now that I will love this soup! I can't wait to give it a try this weekend.

krusher October 17, 2012
I am so enjoying the genius recipes. This is no exception. I want to pay homage to James Ransom' photography throughout the food52 site. It is a revelation. The world of food photography is interesting at worst and magnificent at best. I would love to watch James while he worked. It would be a master class.