Sam Sifton, author of Thanksgiving: How to Cook it Well

Today: Sam Sifton on the new Thanksgiving: How to Cook It Well -- the perfect book for Thanksgiving newbies and family-bound "fellows in sweaters" alike. 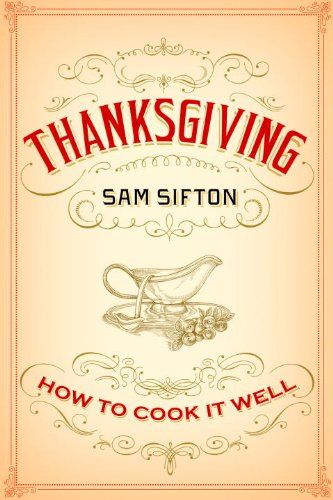 It's easy to get overwhelmed with the idea of Thanksgiving; fortunately, Sam Sifton's new Thanksgiving: How to Cook It Well is here to help. Chock full of classic, unfussy recipes and solid advice, the book is perfect for beginners and pros alike. We talked to Sifton -- former New York Times restaurant critic and its current national editor -- about his ideal Thanksgiving meal, what it was like manning the NYT Thanksgiving help line, and more.

1. Describe your all-time favorite Thanksgiving meal, real or imagined.
Cold day, threatening snow. I wake early, make coffee, put the bird out on the counter to let the chill of the refrigerator come off it. Because this is imaginary reality, there's a way to froth milk for the coffee that's done now. I add that frothy milk to the coffee and it's incredible. There's a beautiful view of salt marsh and ocean from the kitchen window and I take that in. Read the paper. Melt some butter in a small copper sauce pan, and add to it a sprig of rosemary, a splash of mirin, another of soy.

I turn the oven on.

The turkey's in by 8 or so, stained below its initial baste. My wife and children wake to its scent. By 10 there's stock going, dressing in the oven below the bird, the start of some Brussels sprouts, a baking sheet of butternut squash. Someone's dropped off a bag of oysters. It's a big bag. It seems excessive. That is a view that will change.

Friends arrive, bearing pies. Bearing trays of macaroni and cheese. Bearing wine. Bearing whiskey. Children gambol. Dogs bark, then roll over, then sleep. We eat a bunch of oysters in the yard, and throw the shells in a pile.

My wife sets the table as if for a sacrament. The cloth is thick, with a red runner down the center. There are low flowers, low candles. The children make place cards. They set them out. In the kitchen things are moving more quickly now. There is a mashed-potato team hard at work. A pan rattles: pancetta for the Brussels sprouts. The turkey, finished, rests on a countertop, beside two bowls of cranberry sauce. I make gravy, then pour it in a boat.

And it is showtime: give thanks for this all-time favorite Thanksgiving meal. Later, before we get to the pies, we'll take a walk down to the water, get some chill on our noses. Then pie. There's apple, pumpkin, pecan, oh my. Then a whiskey. Then bed.

2. What inspired you to write a cookbook about Thanksgiving?
I manned the Thanksgiving help line at nytimes.com for a couple of Thanksgivings. It was great fun. And it left me with the feeling that readers really wanted — really needed, I should say — a kind of guide to the dead simple basics of the Thanksgiving meal. When it comes to Thanksgiving, most media needs to search for the newest, shiniest, most talk-aboutable way to address the turkey and the fixings. They are in desperate need not to repeat last year's gambit. Which is what leads to turkey confit with ostrich egg gribiche. I don't think most people want turkey confit with ostrich egg gribiche. So I thought I'd write a book where you could go if you wanted to cook…a roast turkey.

There's a book called Hoyle's Rules of Games for card players. It's where you go to check on how to play rummy or cribbage. That's what this book is like, though with stories and really nice illustrations.

3. Who do you see as the ideal audience for the book -- newbies on their first Thanksgiving? Families looking for an upgrade to an old recipe?
Both! Also, beautiful women crawling out of the hole of divorce, saddened but hopeful, ready to build a home out of love instead of rage. And fellows in sweaters who've burned a few birds over the years and, though no one in the family has ever said anything, feel that maybe, just maybe, it might be good to get a sense of how to do it right. It is a book for anyone, really. Well. Thanksgiving is a book for anyone who wants to cook Thanksgiving well.

4. What are some of the takeaways you've learned from your years manning the NYT turkey hotline?
Plan! Don't arrive in Thanksgiving week without a sense of what you're going to cook and for whom, and what you're going to need in order to pull off the show. Make lists. Ask for help. Assign tasks. And make sure if you do nothing else that the turkey has enough time not only to thaw before you cook it but that it is dry when you do so. Don't waste precious time and heat having the oven do work you could have done yourself. Putting a turkey that is dry into the oven is one of the great secrets of the day. It leads to superior skin at the end.

5. Related to the above: when is the last time you've had Thanksgiving at home!? After testing a book's worth of recipes, are you excited to sit down to a turkey dinner this November?
When I was working Thanksgivings we ate when I ended my shift. That was lame because I didn't get to cook and the meal was served later than anyone really wanted. This year we'll sit down in late afternoon and I predict I will be very, very excited. I am always excited for Thanksgiving dinner. It's my favorite meal of the year. This year, I've been having it a lot!

AntoniaJames November 13, 2012
Great interview! Sifton's the best. I can totally relate to this. ;o)