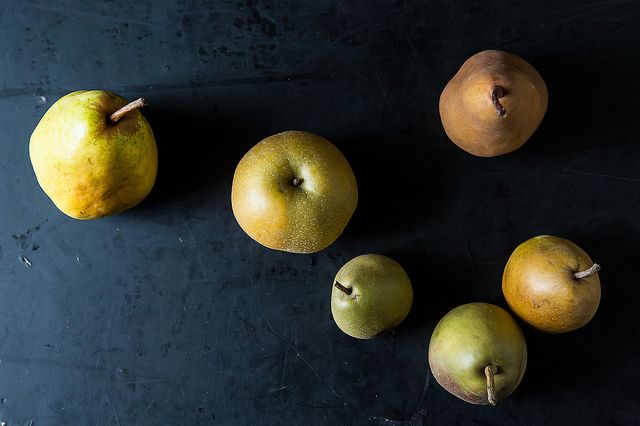 Pears are so distinct that the only word we have to describe their shape is "pyriform," which means, literally, "pear-shaped"! They've been cultivated for millennia -- there were pear tree groves in China 3000 years ago -- and there are thousands of varieties, many of them decorative or inedible. In the US, you'll find about 10 common varieties, among them Comice, Anjou, Bartlett, Seckel, and Bosc.

Because they ripen after picking, pears are harvested early as a kind of season extension strategy: in many orchards, a portion of the harvest is picked at full size but still rock-hard. These pears will continue to ripen slowly, and will outlast the pears picked from the tree when fully ripe!

And finally, an interesting scientific note: ever noticed how the texture of a pear differs from other similar fruit? Their flesh contains sclereids, a type of cell with thickened walls that causes that gritty, grainy texture. 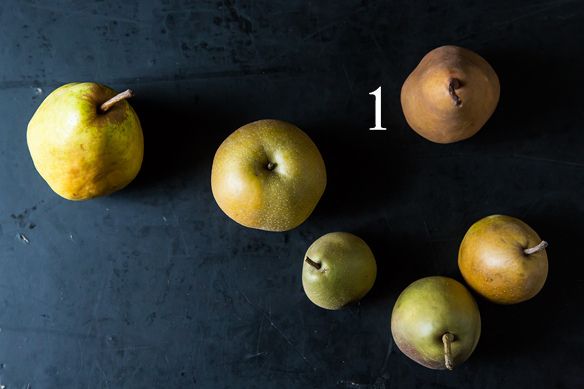 1. Bosc Pears: Elongated and brown-skinned (in technical terms that mottled green/brown pattern is called "russeting"), with flesh that is denser and crispier than other pears, Boscs are sweet even when slightly underripe. This comes in handy when poaching pears -- they won't fall apart. (You'll also recognize them from all those Early Renaissance Dutch still life paintings.) 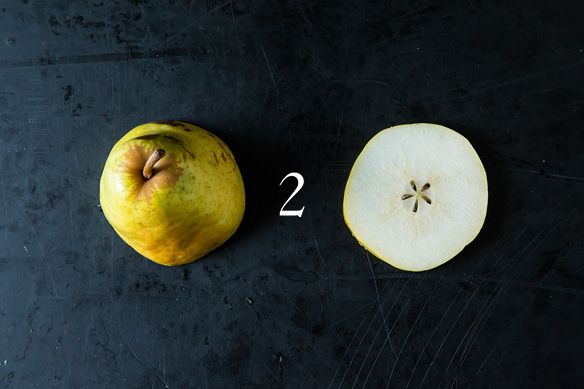 2. Bartlett Pears: Green-yellow with an optional red blush, the Barlett is also called the "Williams pear." They're the most aromatic pear variety, and the most common source for pear juice and canned pears. 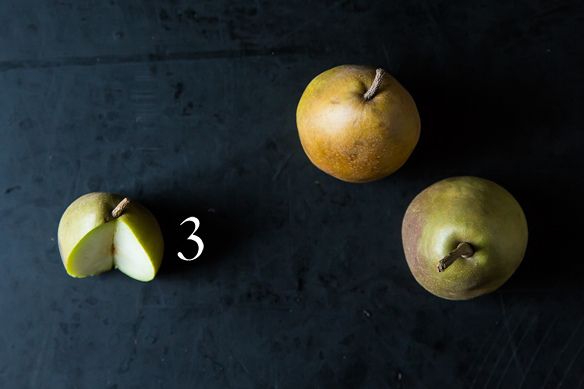 3. Seckel Pears: These are tiny! Intensely sweet and no bigger than a head of garlic, you'll find them at farmers' market sold by the quart. (Their small size and soft flesh make them difficult for grocery stores to transport en masse.) 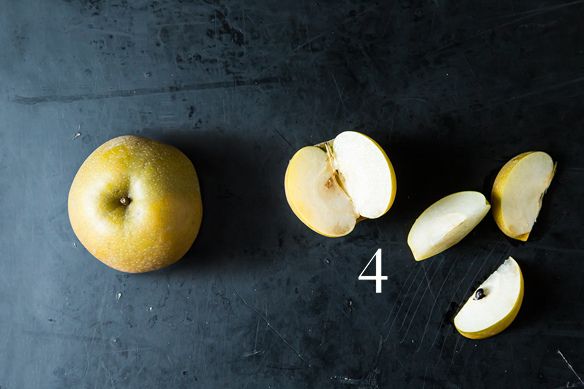 3. Asian Pears: Crunchy, water-filled, and thirst-quenching, asian pears (also called nashi pears) are a totally different from the pears you're used to. They can have brown or greenish-yellow skin, they bruise easily, and because of their high water content, they're best eaten raw. (Unlike other varieties, they must be harvested when fully ripe.) They're also one of the only non-pyriform pears, which makes you wonder about the accuracy of that term!

Try swapping pears in the next time you make apple cake, sauce, or butter for a delicious new variation. How do you cook with pears?

ChefJune December 2, 2012
My all tine favorite pears for flavor (and for tarts) are Comice pears. SO incredibly sweet (in their own sweet way).

JennyYuki December 1, 2012
I got lazy this fall dealing with two (a pair?) of pear trees, and just stuck a couple in the juicer every morning!

Panfusine December 1, 2012
Loved the post, thank you Nozlee!
I sometimes see these yellow (with a red blush) pears in the Indian grocery, they're referred to as Farelly pears, are they similar to the seckel pears?

smslaw December 1, 2012
For pear lovers out there, lok for Taylor's Gold, usually available in the Spring. They're from New Zealand, so not exactly a "green" choice, but they are an order of magnitude better tasting than any other pear I've tried.

blanka.n December 1, 2012
Thank you, now I want to bake something with pears.

jane.coombs88 November 30, 2012
The Asian pear is also known as the Bachelor's Fruit because on examination of many single men's refrigerators, there is a whole lot of space and one Asian pear.