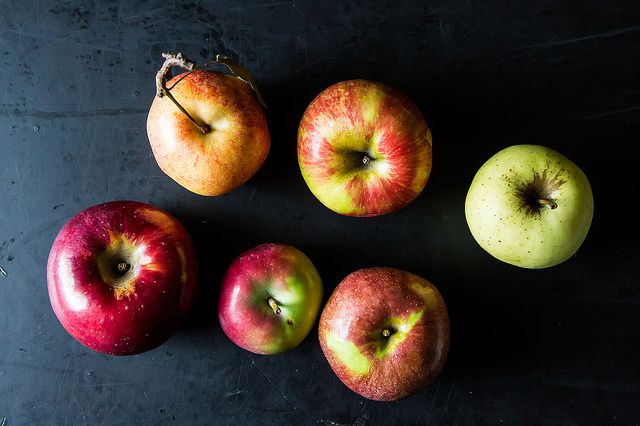 Apples are arguably the world's most popular fruit -- "the apple of my eye," "as American as apple pie," "an apple a day keeps the doctor away." In many languages, other fruits and vegetables are defined in terms of apples, like pommes de terre in French and sib zamini in Farsi for potatoes, and the Medieval name "love apples" for tomatoes. And let's just say you won't find watermelons in the origin stories of multiple religions.

For all their ubiquity, it's a shame that you can only find three or four varieties at the grocery store: Red and Golden Delicious, maybe Granny Smith or Fuji. In reality, there are dozens upon dozens of varieties of apples with amazing names like Northern Spy, Tolman Sweet, Smokehouse, Nodhead, and more. (Check out the apple varieties and descriptions at the Out on a Limb CSA in Maine for a real treat.) Apples can be uniquely suited to certain preparations, as well -- juicier varieties for applesauce, crabapples for cider, firmer apples for pie.

The half-dozen different apples that we found at the farmers' market are just the tip of the iceberg, varietally speaking, but they're a start! We've talked about our favorite apples before, but today we take a closer look. 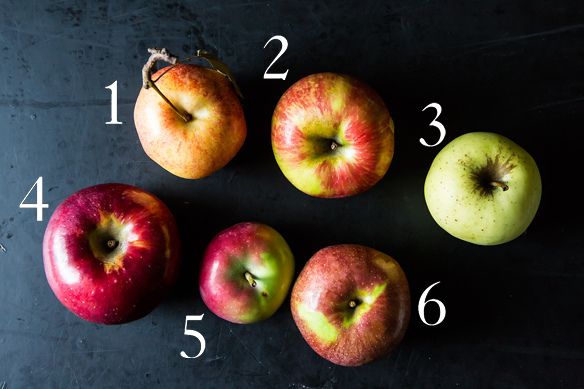 1. Gala: Small, with dappled red-yellow skin, a grainy texture, and mild flavor, Galas store well and and have a long growing season. They were originally developed in New Zealand but have spread all over the world -- they're the most popular apple sold in the UK!

2. Honeycrisp: Developed as a hybrid at the University of Minnesota in the 1960s, honeycrisps are everything a snacking apple should be: sweet, with crisp, firm flesh and flavorful skin. Like many other hybrid plants, Honeycrisps are grown by grafting rather than planting -- fruit grown from the seeds of the hybrid apple won't necessarily have the same characteristics.

3. Golden Supreme: First grown in West Virginia, Golden Supremes are thin-skinned and mellow, with a looser structure to their flesh than many varieties.

4. Cortland: Short and wide, a Cortland is immediately recognizable for its burgundy-and-green skin and stunningly white interior. Developed in New York and still largely grown there, they're a great choice for eating raw -- their flesh browns much less quickly than other apples'!

5. McIntosh: Yes, this is the one your computer is named after. Native to New England and Canada, McIntosh apples lend a pretty pink tint to applesauces and pies. They don't keep well, so use them up quickly!

6. Macoun: These give Honeycrisps a run for their money in the snack department: sweet, juicy, and crunchy, they have the same short shape as Cortlands. Snap them up when you see them -- their short growing season and susceptibility to disease make them a rare treasure when a good harvest hits. 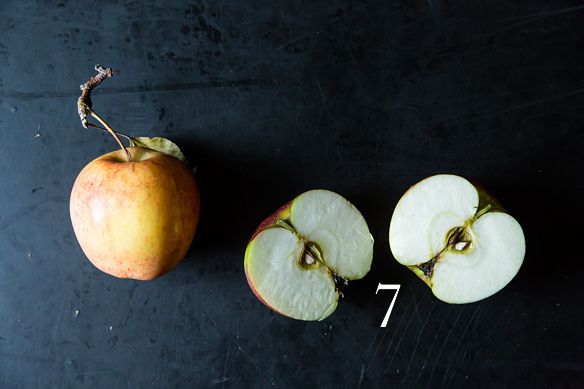 7. Snow White Syndrome: The five-petal apple blossom grows into a five-carpel apple core, each containing one to three seeds. A lot has been made about how apple seeds are poisonous. The truth? Like cherry and apricot pits, apple seeds contain amygdalin, a naturally occurring compound with a bitter almond taste. When consumed, certain enzymes in the small intestine can catalyze, releasing cyanide from the amygdalin. So are apple seeds toxic? Yes. But you shouldn't be worried about eating an errant few.

Now that we've learned so much about apple varieties, make some bold choices with your next pie, tart, salad, or sauce! The Granny Smiths of the world will still be around when you get back, we promise.

Dirt January 12, 2014
Annoying bit of misinformation...
In the Honeycrisp description it states that like other hybrids, it will not come true to seed and must be grafted.
ALL apples must be grafted or started from scion wood. Apples do not EVER come true to seed, and are unique in that the seeds can contain a very wide expression of apple genetics.
Any true named variety of apple is the product of grafting, and genetically identical to the initial tree bearing the named variety.

mainecook61 November 19, 2012
Beg your Whole Foods, et al. to carry Spencers, which are late and SO sweet and delicious. The old orchards, some of which are being brought back, were full of all kinds of varieties, some best for cider (russets), some best for keeping, and so on.

NakedBeet November 19, 2012
Mainecook61, I couldn't agree with you more! It always surprised me that in the great apple growing state like NY, my local Whole Foods doesn't carry any local NY apples, all only 2-3 hours away. I would love to see variety in the market and save on the gas to get to my Winesaps.

scott.finkelstein.5 November 18, 2012
Technically, the idea of the apple as the forbidden fruit is a fairly recent Western European Christian interpretation based on the latin words for "evil" and "apple" being the same, the use of golden apples in Greek mythology, and use in various northern European pagan traditions. Older traditions tend to go with something like a grape, occasionally grapes growing on a tree.

mainecook61 November 18, 2012
Cortland, McIntosh, Macoun (now out of season), Gala, and Honeycrisp? Hmm, these are tasty but still pretty ubiquitous. After a visit to a nearby orchard this past weekend, I brought home: Arkansas Blacks; Northern Spies; Spigolds; Braeburns; Spencers; McConnell Reds; Winesaps; and Idareds. I could have included Baldwins, Wolf Rivers,
Greenings, and many more. Why such a mix? All but the Spencers keep quite well now that we're at the end of the apple season, plus the best apple pies are made from several sorts of apples. If more people would seek out something other than McIntosh-Cortland-Delicious, perhaps orchardists would plant a greater range of varieties! See the Fedco catalog for a good look at the possibilities: http://www.fedcoseeds.com/trees.htm

Panfusine November 16, 2012
you just got me craving mulled spiced cider with this post.. Another delicious post.. as always! thanks!