Today: A humble stew for the holiday season that will be loved by your children and, especially, by you. 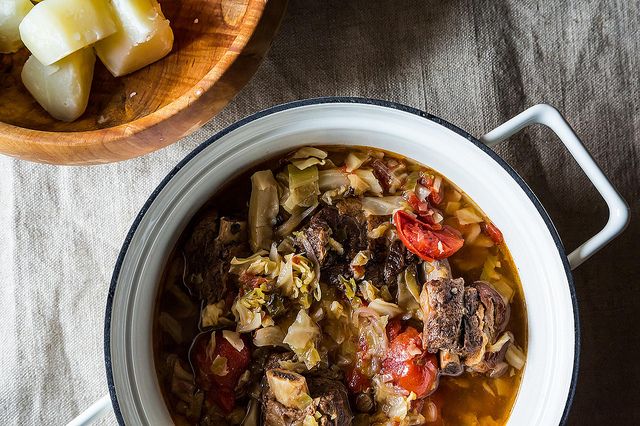 We should talk. It is getting cold, and your life is getting busy, and your holiday season is getting stressful, and although we’ve already been talking for almost two sentences now and I still have no idea who you are, I nonetheless know that your life would be improved by a very large pot of sweet-and-sour cabbage soup. It is warm-blooded; it requires time but not attention; it has no gift list.

Unlike the rest of life, you cannot screw it up. Last week the New York Times ran a story about bean holes—the down-east, ember-fired pits for long-cooked baked beans. You could use a bean hole for cooking sweet-and-sour cabbage soup: it is a dish that would survive being buried.

And your children, unless they are contrarian enough to defy all that is right and good in the world, will love it. 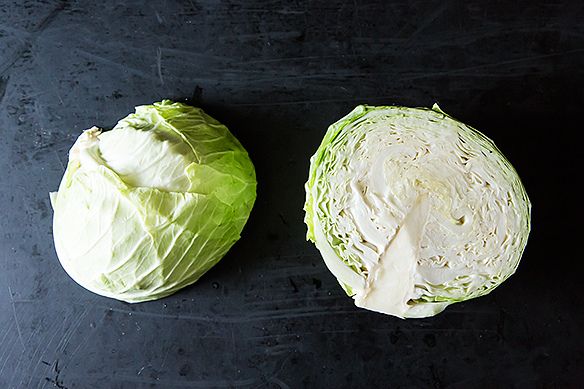 Or at least I did.

I still remember where I had sweet-sour cabbage soup for the first time. I’d write a lapidary Proustian column about it, but I don’t think a Midwestern goy is allowed to do that for shchi. After all, I don’t associate it with the Pale of Settlement, but with a big-top carnival of a restaurant named Ella’s Deli in Madison, Wisconsin—the sort of place that Rube Goldberg would have opened, if he’d had a thing for restaurants. (Pretty much the whole restaurant is in constant motion over your head.) It’s not an old-world deli, in other words. But when life gives you a Midwestern childhood, you make cheese curds.

Ever since that first bowl—sometime in the early 1980s—sweet-and-sour cabbage soup has had a primal pull. It does for Isaiah, too: we used to freeze him infant-sized servings in ice-cube trays. (When he was good, we’d even defrost them.) 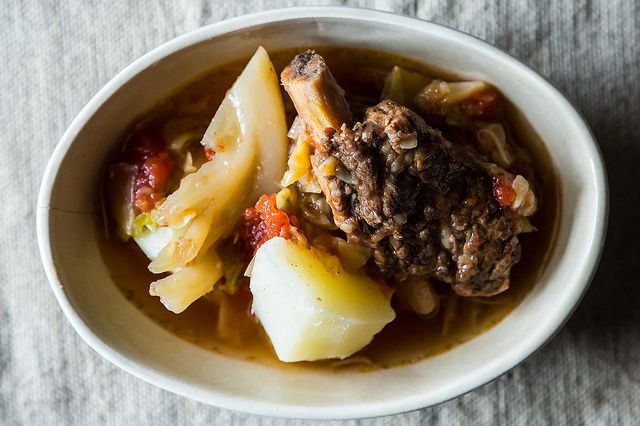 My version is Arthur Schwartz’s, sometimes with potatoes on the side, sometimes without. It doesn’t need them, though. It is elemental: cabbage, beef, tomatoes, water, plus some sweet and some sour. I’d explain how you put it together, but I’d end up using the word pile a lot and when you start using football play-by-play for cooking, you’ve sort of given the game away. The only subtlety here is in the seasoning: you want it to be balanced precisely on that sweet-sour hyphen. Keep tasting and correcting until it teeters.

Arthur Schwartz will tell you that it is far better the next day and he is right. It is also better if you eat it after having been outside. Ideally, you’d make it, go outdoors for an entire day, then return famished and half-frozen and consume it. If that’s not possible, a few bracing moments on the back landing will do. 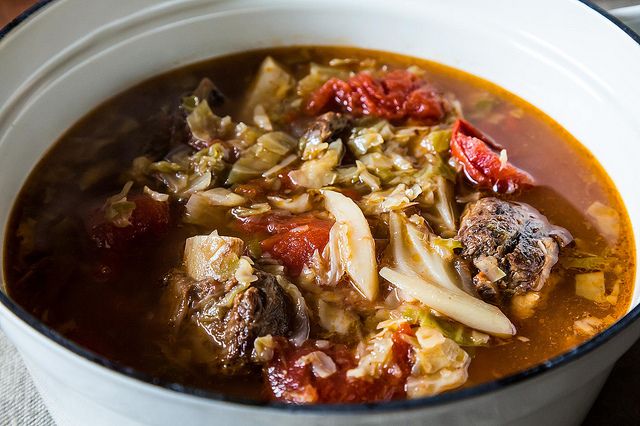 alywit February 21, 2016
I made this flavorful, satisfying soup tonight to have for our family dinner tomorrow. It is an excellent, well written recipe. I could definitely imagine using a slow cooker instead of the stovetop.

Our butcher and local grocer were both out of beef ribs. I substituted with large chunks of chuck roast and some miscellaneous beef bones. I also increased the amount of beef this recipe calls for because we like a heartier dish.

My grandmother used to make this dish and it was a totally wonderful childhood flashback! This will definitely become a winter staple for us. Thanks for including it in your winter soup list!

Ingrid B. March 3, 2013
I love the way you write! How about a novel or screenplay about foodies?