Today: Nicholas brings us the best French onion soup to take on what's left of winter (with a secret ingredient you'll never want to miss again). 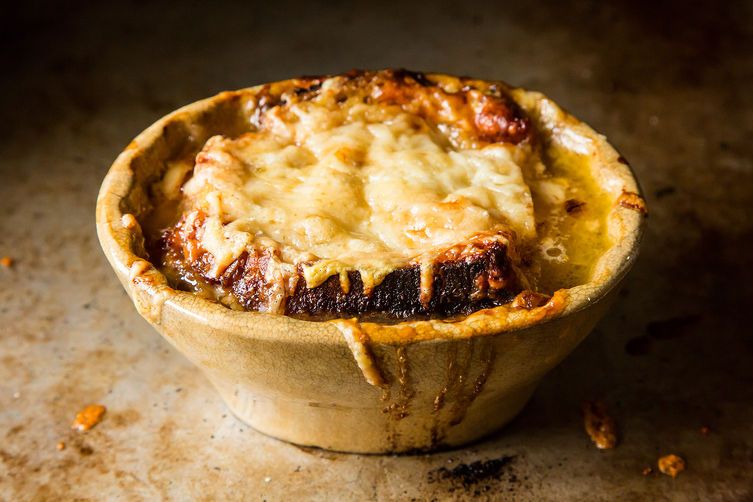 French onion soup should not be a guilty pleasure: it is nothing more than a field of onions, stock, bread, some cheese, some open flame. It is, at its humble core, a peasant soup: a cheap staple—onions—improved with a minimum of heat and a maximum of time, stretched with bones and water. Peasant soups should not feel like a guilty pleasure. They should feel like longing.

So why does French onion soup seem like something you should feel vaguely ashamed to be eating, let alone feeding to your children? Let us bracket the broiled cheese. Even the broth of a good French onion soup always tastes like decadence. It tastes so close to the bliss point that you begin to suspect nefarious methods.

All of which is a way of saying: this column will not be about kale. It will not have any words that begin with super and end with food. It is about meaningful exhalations and poor postpartum posture. It is a slushy, end-of-February sort of column. Think of it as slumped up against the screen. 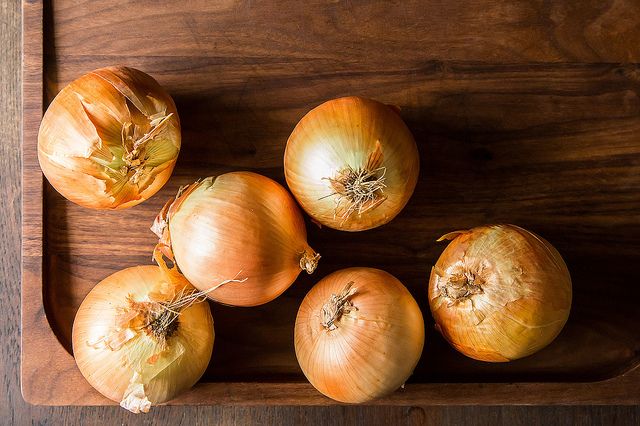 If your child dislikes French onion soup, you have a problem. (Although maybe not: more for you.) Because unless said child has a thing about textures, in which case the onions can seem like slimy eels your parents have snuck in your soup, French onion soup is hard for even the pickiest eater to reject. It’s ecumenical: you don’t even need teeth.

And unlike—I dunno—macaroni and cheese, with which it shares a fair amount of nutritional content, it won’t make you feel like you’re pandering. French onion soup looks like a real, tableclothed dinner. 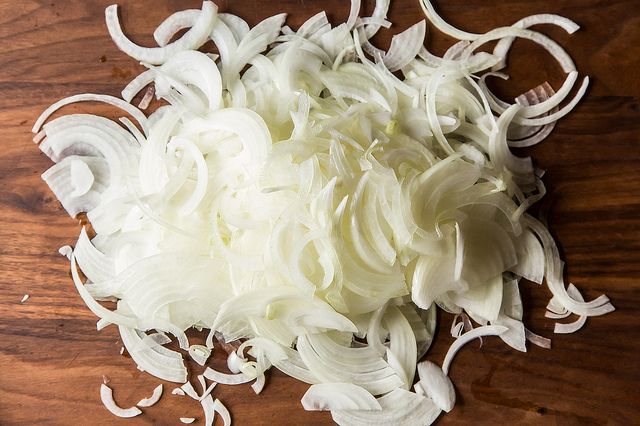 And yet for all that: is there any soup that has been more wronged? (With the possible exception of minestrone—have you seen the things they do to minestrone? There should be a law.) At its worst, French onion soup tastes like a soup that someone abandoned their half-eaten bread in and then served to you.

This soup, dear Reader, is not that soup. It is the Backward Town version from the Tartine Bread cookbook: instead of caramelizing your onions by coddling them on low heat, you scorch them. On high.

This is when I tell you about the cup of cream. I can hear you from here: that’s why it tastes like a guilty pleasure, you nitwit. So I lied a little! But last time you got vegetables! And you need a cup of cream to get through February anyway: what if you go and fall into a snowdrift tomorrow? This French onion soup may save your life.

Here’s how we do it: dump the cream, a knob of butter and a tearjerker’s worth of onions into the pot. Turn up the heat. Wait until the cream turns into solids. Then wait the onions get sticky brown. Deglaze. Repeat. Repeat. Repeat. Add broth. Bake. (The deglazing involves wine, yes. If you have drinking age-related concerns, use stock. I used wine and immediately after dinner, a certain diner started spinning madly in circles and giggling maniacally. On the other hand, he does that every night.)

After Isaiah took his first bite, he dropped his spoon and said, abruptly, “Whoa.” I thought he’d burned himself. “Whoa,” he repeated and then slapped his forehead with his palm, vaudeville-style. “This is delicious.” (You have to imagine this said with a thick Brooklyn accent, the sort of Brooklyn accent no one but four-year-olds or seriously old men have anymore.)

“Dada,” he said. “You have to soak bread in soup for a really long time more.” I promised him I would. 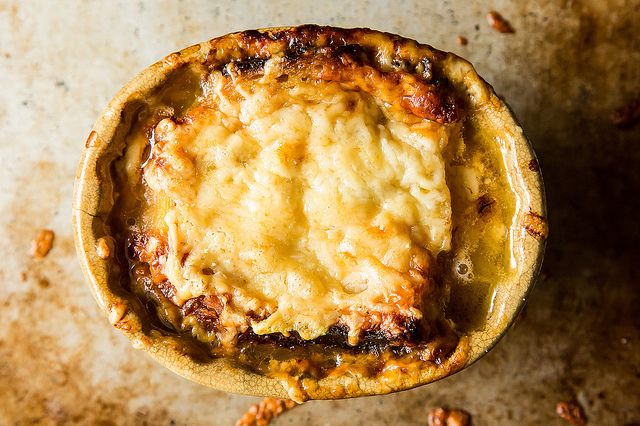 Erica H. March 4, 2018
First time making French Onion Soup, this was a tremendous hit. I used beef stock, because I had recently made some, and it worked beautifully. Easy and delicious.

Lesley J. January 2, 2015
I've never tried French Onion soup, but I am inspired to give it a try!

divyavin August 19, 2013
This is such an amazing article, and inspiring too boot. Love me some Julia Child, but to throw a monkey wrench into things - is there a way to make this soup vegetarian? Would vegetable/mushroom stock work, and has anyone tried?

Alicia V. April 11, 2013
Tempting yes, very tempting... I shall try this. I have a friend who cannot tolerate ingesting beef (bad digestive issues) and this seems right up her alley. Ooh a dinner party is forming in my brain. I LOVE that!
Also I must say that some of my non-food nerd friends think I'm a mad woman for giggling as much as I do while reading the articles here on Food 52, but the writers are so witty and have such clever turns of phrase. Never stop loving food, you inspire that love in others!

Luvtocook March 7, 2013
I like sweet onions! And love Julia's recipe, too, like many of the posters. Can't imagine CREAM in French Onion Soup. Non! Non! Non!

Kristen March 7, 2013
just finished making this. I too was a Julia Child follower, but this is fantastic. I absolutely love this version, and my house smells fantastic. thank you Nicholas!

kerry N. March 3, 2013
Here's the thing. I am a slave to Julia Child's recipe. The very act of caramelizing onions for 3 hours makes me happy. It forces me to slow down. Nicholas is one of those guys you meet at a bar in college and he's so sure of himself you can't help developing a crush on him immediately. Then you start dating and you find out that he's right about breaking the rules and misbehaving. This soup is so good that if I smoked, I'd need a cigarette.
Author Comment

Nicholas D. March 3, 2013
Kristen -- can we hire Kerry to comment on all of my articles? Can we give her a column?

dianadannenberg March 3, 2013
ha ha... this is soooo cosmic... i just finished the beginnings of diana's totally awesome french onion soup (got the broth going, did the onions, etc) and sat down here... and lo and behold, the first mail i opened was food52 and this delightful french onion soup recipe... such timing. this sounds so tasty... ahem... i still like mine better... no offense

EatsMeetsWest March 3, 2013
Nicholas, your posts always make me smile no matter how my day is going, they're that hilarious :) . I also never would have thought that cream would go well in French onion soup, but what the heck. This one looks too amazing to pass off :D

Jukesgrrl March 3, 2013
I will make this recipe for the simple reason that article was so well written. Isaiah sounds like quite a guy.
Author Comment

Nicholas D. March 3, 2013
A few months ago I heard him muttering to himself, "I sure am something else."

zora March 3, 2013
I just made onion soup with slow caramelized onions and homemade chicken broth and changed it up by adding French lentils, which made it seem even rib-stickier if there is such a thing. The baguette crouton and comté baked on top helped too.
Author Comment

pat.fusco March 3, 2013
This is slightly amazing. I awakened this morning with a very strong craving for onion soup -- which I haven't made for such a long time I don't remember the last occasion. Seeing this recipe obviously means that I must get going on it. Merci, Nicholas!

Rosemaryandthegoat March 3, 2013
I also love French Onion Soup and after having CIA's version in Napa I came up with my own which has a souffl

Butternbourbon March 1, 2013
Why not beef stock? This sounds great BTW. Just don't ever buy sweet onions by mistake like I did once. Absolutely awful!!!