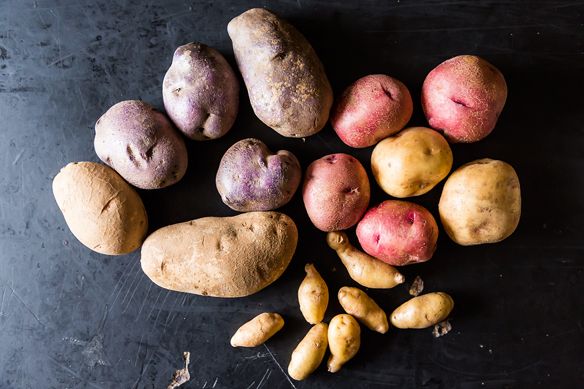 The last time we talked about potatoes, Marian Bull helped us figure out how to match recipes to the potatoes that suit them best -- starchy Russets for mashing, waxy red potatoes for salads, and more. Today we're digging underground to learn even more about the potato: we'll talk about how they're actually the stems of the plant, what exactly a potato fruit looks like, and what it really means when their skin turns green after storage. 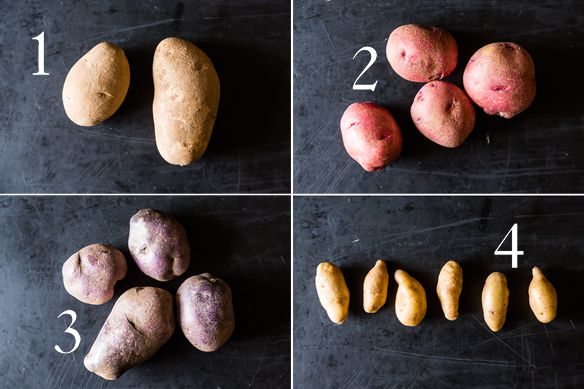 Potatoes were first domesticated thousands of years ago -- believe it or not, research shows that over 99% of all modern-day potato cultivars can be traced directly to a few varieties that once grew in southern Chile. That's right: although we associate the tuber with Ireland's potato blight and Russia's vodka, potatoes originated in the Andes of South America.

1. Russet: First grown in Massachusetts in the 1870s as the Burbank potato (named for its creator, the botanist Luther Burbank), the potato later developed the russeted skin that gives it its name. ("Russeting" is a harmless condition that causes microscopic cracks in a vegetable's skin -- apples and pears can also develop it.) With moderate levels of starch and sugar, white-yellow flesh, a very regular size, a reliable growing cycle, and and a long storage life, russets are the standard by which other potatoes are measured. So many are grown in Idaho that they're often sold as "Idaho potatoes," and they're by far the most popular choice for fast-food french fries.

2. Red: In contrast to the oblong russets, red potato varieties are generally round, with irregular "eye" placement, smooth skin, and white flesh. Often described as "waxy" for their lower starch content, they maintain their shapes when boiled and develop creamy, soft insides. However, they won't crisp as well as higher-starch potatoes -- save these for salads and soups instead of roasting.

3. Blue/Purple: With their color coming from (you guessed it) anthocyanins, blue and purple potatoes are as gorgeous as they are delicious, with both starchy and waxy varieties available. Their color is a practical concern: millennia ago, their ancestors grew on high Andean mountainsides with direct exposure to sunlight -- and as we'll discuss later, sunlight causes higher levels of toxic solanine in potatoes. The dark skin and flesh of purple and blue potatoes acts as a natural shade from the sun. Who said that beauty was just skin deep?

4. Fingerling: Small in size with smooth skin and a skinny, stubby shape, fingerlings are different from new potatoes, which are simply picked before they reach full maturity. The three most common cultivars of fingerling are Russian Banana, a creamy, fully-flavored, richly yellow potato; French fingerling, with its rosy pink skin; and Purple Peruvian, a South American heirloom variety.

And that's not all -- since their domestication, hundreds of potato cultivars have been bred in all shapes, sizes, and colors all over the world. Yukon Gold is another common variety, developed in Canada in the 1960s as a perfect cross between waxy and starchy potatoes. Nowadays, winter farmers' markets are your best bet for unusual potato types, with names like Amandine, Jersey Royal, and Adirondack Blue -- for fun, buy a few of every type and run a taste test to see which you like best.

5. Color Changers: When exposed to air, potato flesh quickly oxidizes, changing color from white to red-orange to brown-purple, then finally to an unappetizing black. While oxidization in no way affects the taste or nutrition of the plant, it sure is ugly. (For a much more scientific breakdown of the process, you can turn to Potato Science and Technology by G. Lisinska and W. Leszczynski.) Soaking cut potatoes in water is the easiest way to avoid this -- just make sure you dry them well if you'll be roasting or frying them afterward.

6. Taste the Rainbow: The pigments that tint blue, purple, and pink potatoes are sensitive to pH values. Acidic dressings tend to intensify their colors, while rough-and-tumble boiling can turn both blue and purple to grey. Try steaming or roasting colored potatoes if you want to keep their colors bright. 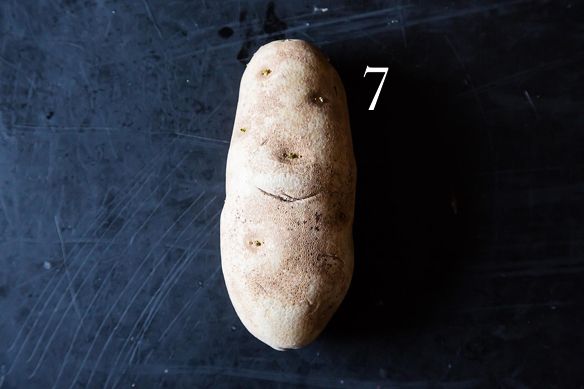 7. How Potatoes are Made: As we learned when Amy Pennington taught us to grow potatoes in bags, potatoes are actually the stems of the plant, not the root. Even more technically, they are called tuberous stolons, stems that grow just above the soil and form new plants. The dimples that dot a potato's surface, called "eyes," are cut apart and planted to grow new potato plants -- sprouts grow from the eyes, forming new stolons in their wake.

Interested in growing your own potatoes, in bags or not? You'll need to buy "seed potatoes," grown from special varieties that are guaranteed to be disease-free, at a nursery -- the potatoes you buy in grocery stores have been cured and treated such that they either won't sprout or will yield poorly. So if a potato is a stem, what is the fruit of the potato plant? Not all varieties produce fruit, but when they do they look like tiny purple-black tomatoes. (No surprise here: potatoes and tomatoes are both in the Nightshade family.) While the fruit can be processed to yield true potato seeds (calling potato eyes "seeds" is a misnomer), the fruit themselves are toxic, with high amounts of solanine.

As potato stolons grow, it becomes necessary to pile soil around their leaves and stems to shield them from the sun, a process called "hilling." The topmost leaves will continue to distribute sunshine to the underground portions, allowing the potatoes to grow without developing toxicity. When the leaves and flowers begin to die back (fun fact! potato flowers generally correspond to the potatoes' color of white, yellow, pink, or purple), it's time for harvest -- farmers use special wide-toothed rakes or spades to safely dig into the potato hills without damaging the tubers themselves. Because their skin is still fragile, they must be further processed if they're to be stored long-term. This is done by curing them in a cool, dark, ventilated environment that dries the potatoes' skin into a protective layer over their moist flesh.

Finally, you may have noticed green-tinted skin on the surface of potatoes that have been stored for too long. This is the result of exposure to sunlight causing chlorophyll development, which is also linked to the formation of toxic solanine. Unfortunately, the solanine develops throughout the potato's flesh and not just in the green portions, so you can't just trim them away -- if a potato looks a little too green around the gills, throw it out to be safe.

As we've learned today, potatoes are anything but boring. With their endless dress-up, dress-down versatility -- from classic gratin to homey, satisfying mashes -- it's no surprise that potatoes are one of the most popular crops in the world, spanning time, culture, and cuisine.

fayehess January 14, 2013
what I would like to know is: why when I buy the brand "jolly green giant" fresh potatoes in a bag (desperate times/desp. measures) do the potatoes go black AFTER cooking. they look perfectly fresh and no turning color before going in the oven, but after roasting, they look as if they were rotten from the beginning.

Nozlee S. January 14, 2013
GREAT question. The answer is a strange one: my bet is that those potatoes have been in storage for a long time, and that they endured quite a bit of tossing and turning during harvest/bagging/transportation/storage. They may even have been accidentally partially frozen at some point.

Like apples, potatoes can be "bruised" with rough handling, and like many other vegetables they don't freeze well in their raw state. Those black spots you see are are (1) the result of bruising, which caused the potato's starch cells to burst, and (2) the result of the iron in the potatoes reacting with a chemical called chlorogenic acid, which happens when the potatoes are exposed to the cold and which develops a black pigment after cooking. (You can read more about the reaction here: http://www.washingtonpost.com/wp-dyn/content/article/2005/07/05/AR2005070500317.html)

Fascinating stuff, huh? Fortunately, it's easy to avoid by buying fresh potatoes. (And the black pigment is totally harmless, it's just unsightly.) Thanks for your question!

Macedoine January 11, 2013
I love potatoes (my first nickname as a toddler was "Potapi" because that's what I kept demanding for dinner!) and I love this article for giving me all the potato knowledge a potato-phile needed! Now I finally know why Yukon Gold is so wonderful (it's a cross between the waxy & the starchy) and what makes my favorite farmers' market spuds so blue. But I do have a question - what's solanine, and what does it do? Would eating a few errant greenish potatoes be toxic?

Nozlee S. January 12, 2013
Solanine is a naturally occuring poison found in nightshades -- ie, potatoes, eggplant, and tomatoes. It can cause GI and neurological problems when consumed in excess, but don't worry! The levels found in a green potato are very minor. As long as you aren't regularly consuming potato or tomato leaves, you are A-OK.

Panfusine January 11, 2013
I had a question about this gorgeous Pink variety of potato that my local farm had last summer. The skin was kind of 'russeted' but the insides were a beautiful crimson that delightfully did not lose their color, I can't seem to find much info on them. Here's a link to a dish that I used the potato in just to give you a visual idea. Thanks so much!.
http://dish-a-day-panfusine.blogspot.com/2012/09/day-252-pink-potato-bhajias.html

Nozlee S. January 11, 2013
Wow, so beautiful! Adirondack Red is a widely available pink potato, but there are many varieties. Try searching for "pink flesh" on this page: http://potatoes.wsu.edu/varieties/vars-all.htm

Panfusine January 11, 2013
Thanks so much for the name, Now I know what to ask for at other stores!