Down & Dirty: Sweet Potatoes and Yams

What's in a name? Well, for starters, sweet potatoes aren't really potatoes -- they're actually in the morning glory family. And yams are in a genus all their own, more closely related to lilies than spuds. The naming confusion can be traced to the American South in the 18th and 19th centuries, when African slaves encountered the sweet potato and naturally linked it in their minds with their native yam. But they're both delicious no matter they're called -- nomenclature aside, today we take a close look at sweet potatoes and yams. 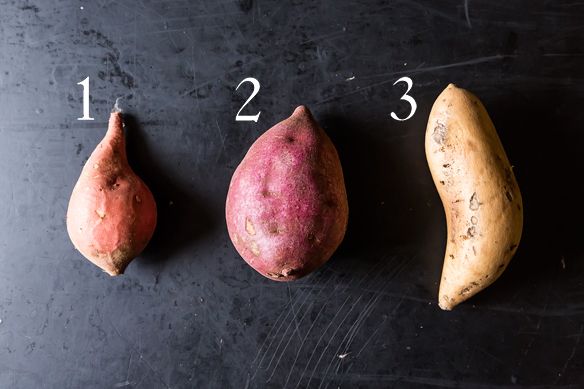 1. Sweet Potatoes: Native to Central and South America, sweet potatoes are one of the oldest cultivated crops in the world -- going as far back as 8000 BC! Their intense nutritional content, generous harvests, and short growing time make them an important part of the diets of many cultures. Sweet potatoes are the roots of the plant, with smooth, thin skin and moist flesh. While they can't survive a frost, they're a hardy, easy-going summer plant that you can even grow in a bag if you're short on space! The easiest way to grow sweet potatoes is from vine cuttings, which easily take root when planted. The vines, which resemble morning glory leaves, are also edible. Snap them up if you spot them at farmers' market -- they make a tasty addition to simple sauteéd vegetables.

2. Yams: Indigenous to Africa and Asia, yams' similarity to sweet potatoes ends with their similar shape. As tubers, they store nutrients for the plant, and because of their year-long growing cycle their skin grows tough, dry, and scaly. (That long growing period coupled with an inability to survive frost means they can be grown only in tropical climates.) Like many tubers, including potatoes, new yams are grown from cuttings of existing yams. And they really grow -- the largest yams are nearly five feet long when fully mature! While the smaller yams sold in US grocery stores don't have this issue, the larger yams grown in Africa must be thoroughly cooked and processed before eating to detoxify the bitter compounds present in the flesh. Once cooked, the high levels of protein and nutrition in the tuber make it a diet staple in many parts of the world.

3. And the Rest: There are over 500 varieties of yam, from the long and skinny Japanese yam to the Southeast Asian bright purple water yam. It's worth seeking out less common sweet potatoes as well -- the slender Japanese Garnet is a favorite. 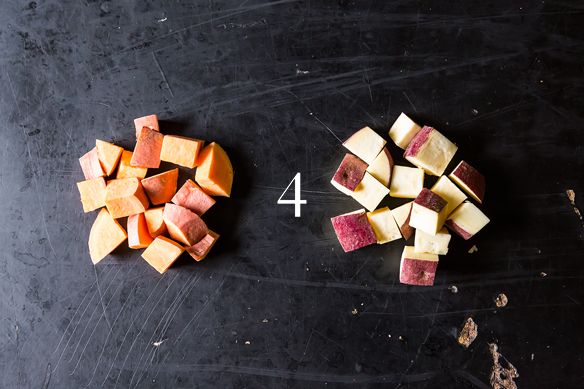 4. Variety Show: Both sweet potatoes and yams come in a veritable rainbow of colors: their skin ranges from white-yellow all the way to red-orange and purple, and the flesh can be palest white, pink, orange, yellow, or purple. Many white-fleshed sweet potatoes in the US are labeled "yam sweet potatoes," a funny misnomer. Ignore the names and instead look to the vegetables' origin to identify them: yams must be imported from warmer climates, whereas sweet potatoes can be grown in the US. 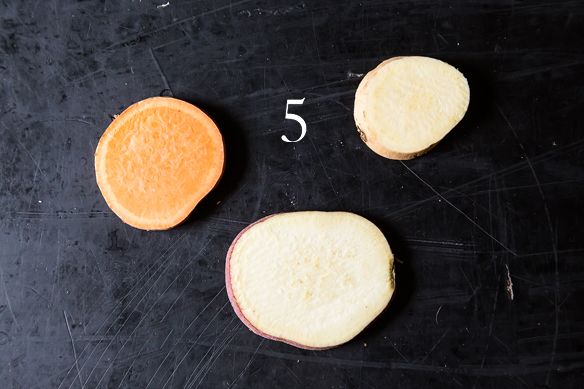 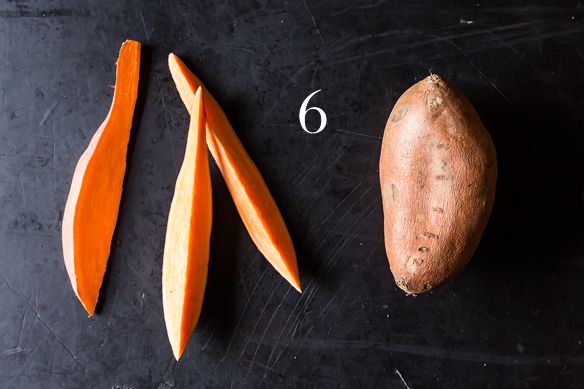 5. "Steaks": In the kitchen, sweet potatoes and yams are just as versatile as the common potato. Cut thinly they make perfect potato chips and bake up into a variation on the classic Potatoes Anna; cut more thickly and roasted they resemble, in food blogger Deb Perelman's words, the browned exterior and soft center of a steak!

6. Wedges: The idea of making french fries with sweet potatoes is not new, but it's certainly popular. (Any preparation that maximizes crispy surface area is fine by me.) Yams can be made into "fries" as well, but because their flavor is best after a long boil the process is polenta-like: the cooled and solidified yam is cut into shapes and then fried.

We promise not to tell if you keep calling your Thanksgiving sweet potato casserole "baked yams." But try the real deal if you haven't -- this peanut stew with African flavors is a great place to start.

Kitchen B. March 2, 2013
Interestingly, none of them look like 'yams' like we know them in Nigeria. All the varieties shown we call 'sweet potatoes' in Nigeria. Our yams are long, dusty brown on the outside, with creamy - yellow interiors. They also have no hint of sugar in taste. See http://www.kitchenbutterfly.com/2013/02/02/nigerias-dry-seasons-produce-januaryfebruary/

Nozlee S. March 3, 2013
Yes, I really enjoyed researching about those yams when I was writing this piece! Unfortunately, because they're not widely available in the US, I had to skip them. But it's strangely comforting that the "yam" vs "sweet potato" nomenclature is confusing all over the world.

Carolina R. April 20, 2013
@ Kitchen Butterfly. Yes, as in Portugal . Yams look like yours and all the ones mentioned in the article we call sweet potatos.