Too Many Cooks: What's on Your Bagel? 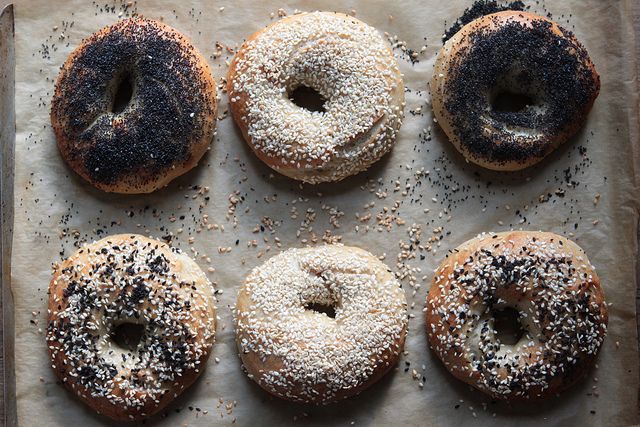 We thought our team had strong opinions about sandwiches, but it turns out we may have even stronger opinions about one particular type of sandwich: the bagel. (We are based in New York, after all.) One thing we all seemed to agree on is that bagels make the perfect blank slate, ready to be topped with whatever our hearts desire. This week, we asked our team:

What is your bagel order?

Do you like it toasted or untoasted? Do you go for everything or plain? Cream cheese or butter? Do you make your own? Tell us in the comments! 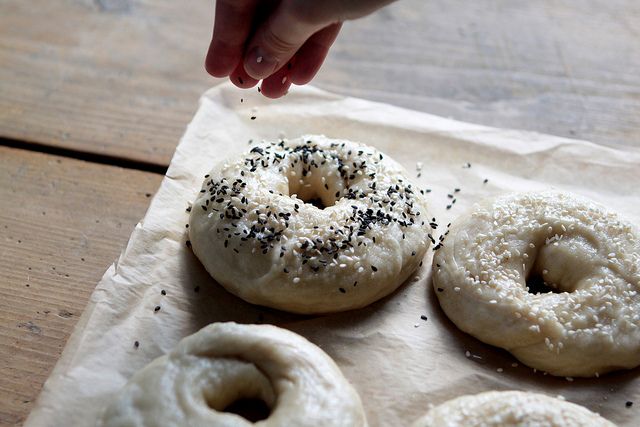 Kenzi: Don't look now, but you all have poppy seeds in your teeth. Sesame bagel, toasted, cream cheese, lox, tomato, capers. (Or dripping in butter and salt, a la Brette.)

Amanda: Okay, so it has to be a sesame bagel, but not just any old sesame bagel, and definitely not one of those bloated ones. It should be flat, dark, the crust a little bubbled. Sliced and toasted, and spread with salted butter and blueberry preserves.

Sarah: Sesame bagel, hot from the oven, ripped open in chunks, and sprinkled with salt. 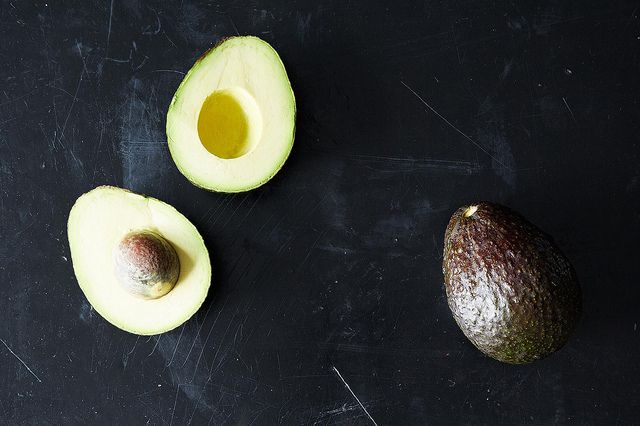 Hannah: Toasted everything bagel, sliced avocado, and salt -- à la Maggie and Amelia at lunch the other day.

Amelia: My go-to order is an everything bagel, toasted, with cream cheese and lox. Or, as Hannah pointed out, topped with avocado. But the everything bagel is the most important part of the order.

Marian: My order is obviously an everything bagel with plain cream cheese.

Bryce: Everything bagel, cream cheese, sliced tomato. If it's for lunch, add to that pepper turkey. Boom.

Ryan: There is a bagel shop literally below the floor of our apartment, so I wake to the smell of everything bagels every day. (I guess they're the only ones with a strong enough scent?) When I'm feeling sweet: cinnamon raisin with walnut-raisin cream cheese. Feeling savory: everything with scallion cream cheese. 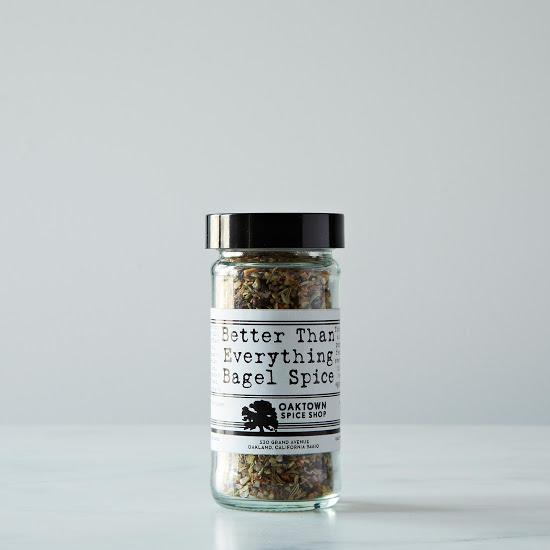 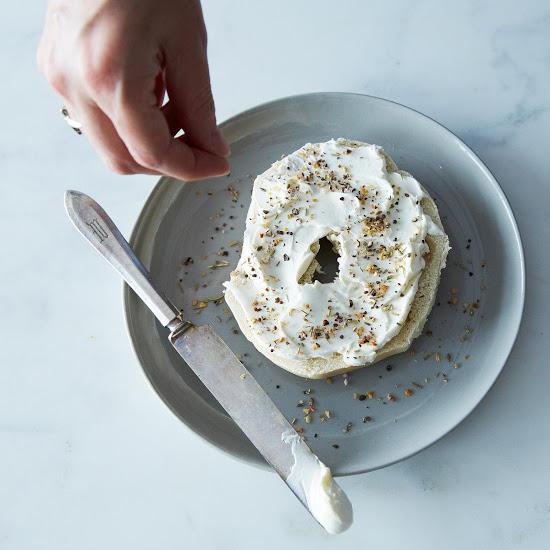 Christina: Toasted everything bagel (maybe I should make my own with the Better Than Everything Bagel Spice that we're selling in Provisions), plain cream cheese, lox, and thinly sliced red onion.

Brette: I have many -- my order is a very specific calibration of season, mood, company, and occasion. Plain bagel, toasted, drenched in butter and salt. Everything bagel with cream cheese, smoked salmon, red onion, and a squeeze of lemon. Everything bagel, scooped, toasted, with cream cheese and smoked salmon. (Don't judge -- the scoopage leaves room for more salmon.) Cinnamon raisin with cream cheese. Cinnamon raisin with butter and lots of salt. If the bagel is super fresh and chewy and awesome: NOTHING. Unsliced. Broken off in hunks.

Lauren: +1 scooped everything (for crunch), very well toasted, with just a little cream cheese and lox.

Jennifer: Whole wheat everything bagel (scooped) with tuna salad, sliced red onion and lettuce -- and a half sour pickle on the side.

Kenzi: Here's the thing about scooping a bagel: it's utterly sacrilegious.

Jason: I agree with Kenzi -- all this scooping is madness!

Lindsay: What is all of this talk of scooping?! You're removing the bagel's bagelness. A toasted Zingerman's Enough Already bagel (a.k.a. the best everything bagel of all time) with plain cream cheese -- no skimping.

Maggie: I get a lot of flack for this at school, but I toast a plain bagel, schmear it all over with cream cheese, and eat one half of it with red onions and the other half of it with raspberry jam. It's lunch and dessert, brought to you by one bagel! 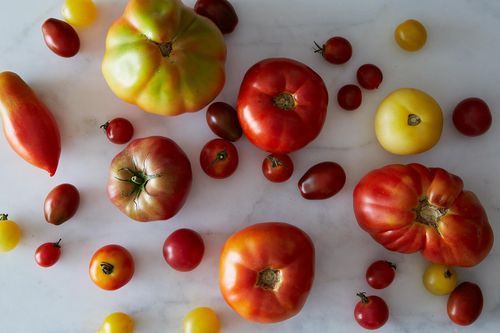 Peter: I don't eat a lot if bagels but if within 100 miles of Montreal, then a proper Montreal bagel from Fairmount. Otherwise -- and this makes me a bad Jew -- nothing beats my standard Sunday morning bagel order from my college days: Cinnamon raisin. Split. Toasted. Heavily buttered with salted butter. A generous dose of cinnamon sugar.

Maddy: Everything lightly toasted with cream cheese, super thinly sliced red onion, capers, and smoked salmon (+1 on Russ and Daughters). Cinnamon raisin with plain cream cheese. +1 on cinnamon raisin with butter and cinnamon sugar, but I do it untoasted, load on the butter and cinna-sugar, and then broil open face so the sugar caramelizes a little.

Stephanie: Team Fairmount forever! St. Viateur is for people with no tastebuds.

Kristen: The Melt was one of the first Genius Recipes I ever came across, from Bagel Cafe in Isla Vista, CA. Bagel of choice (egg or sesame was my choice), split, layered with cream cheese, then a slice of tomato, then a slice of sharp cheddar, broiled. Lemon pepper from a giant shaker at the end. Served on a sheet of foil. There's also a deluxe version, but why be fancy at a moment like this?

Tell us: what's your order? Or do you DIY?

Top two bagel photos by Eric Moran; all other photos by James Ransom

Rob N. August 11, 2013
Interested bagel bakers want to know: what's your definition of "everything". Seasame & Poppy seeds for sure. After that some combination of fennel, onion, garlic, salt, flax and caraway. I've seen lots of combinations; what's the classic and/or preferred mix?

ChefJune August 12, 2013
sesame, poppy, onion, garlic, salt, caraway. afaik. Oh and I forgot to mention I never eat a bagel closed. Has to be open faced. I can't get my mouth around it as a closed sandwich.

MomMom August 11, 2013
Onion bagel, a light shear of cream cheese, lox, capers, red onion - oh, yes and toast the bagel even if it is freshly baked!

RespectThePastry August 10, 2013
Salted Bagel from Bialy's not toasted or sliced! With a side of cream cheese, butter and sea salt to lightly dip fluffy bagel chunks into. Yum :D

dreonrice August 10, 2013
Onion bagel with peanut butter. Hope you don't get stuck in front of me in the bagel line. It's been known to cause some consternation when the orders get crossed...but seriously, it's really good, brave eaters please try!

Diana P. August 9, 2013
OK for nostalgia purposes, it's gotta be a Northeast NJ bagel. With two older brothers I had to make do with whatever bagel I could grab out of the bag, so I don't discriminate and am happy with sesame, plain or everything though I must say poppyseed was always a disappointment. Anyway, got to hollow out just the tiniest amount to make room for a good slab of cream cheese, thinly sliced (so it is see-through) lox, in-season slices of tomato, the thinnest slice of red onion and voila, the perfect bagel!

boulangere August 9, 2013
Bagels are one of my hands-down favorite things to make because THEN I can make bagel sandwiches! http://thesolitarycook.wordpress.com/2012/02/01/lets-bake-bagels-part-1/

Jenna S. August 9, 2013
Everything or sesame bagel with light cream cheese. But was a huge fan of this sandwich in my college town called the Wham-O that had turkey and avocado on it, with sprouts. So freaking amazing. I miss that.

maeveoh August 9, 2013
In the words of my local bagel lady, "Sometimes you just need lox spread."

HalfPint August 9, 2013
I like my sesame bagel with a light smear of cream cheese, 2 tomato slices, and a tablespoon of capers. On occasion, add 2 slices of bacon.

fiveandspice August 9, 2013
A fresh - no toasting necessary - sea salt or sesame bagel from Scratch Bakery (Portland, ME) with gratuitous amounts of cream cheese, lox, and a slice of tomato; or a lightly toasted plain bagel with bacon, cheddar, a fried egg; or, and this may be a habit particular to my family, but it's surprisingly good, a well toasted plain bagel with a lot of melted salted butter and paper thin slices of salami.

Aliwaks August 8, 2013
Ahh I miss New York...
So I have many bagel moods, but never blueberry, never egg, poppy seed, plain or salt.

Toasted Everything bagel ripe perfect tomatoes, cream cheese & bacon (alt cucumber for tomatoes if they are not perfect or for bacon if feeling chubby)

Warm Pumpernickel bagel, butter on one side, scallion cream cheese on the other, nova lox (sliced thin) Jarlsberg cheese or capers but not both & Butter lettuce

Cinnamon raisin toasted till almost burnt w salted butter on one side cream cheese on the other, one do they don't touch.

And there you have the history of the sunday mornings, after school snacks, lunches & breakfasts of my life in bagels.
:)