How to Prep Eggplant

Inspired by conversations on the FOOD52 Hotline, we're sharing tips and tricks that make navigating all of our kitchens easier and more fun.

Today: How to help your eggplant to reach its fullest potential. 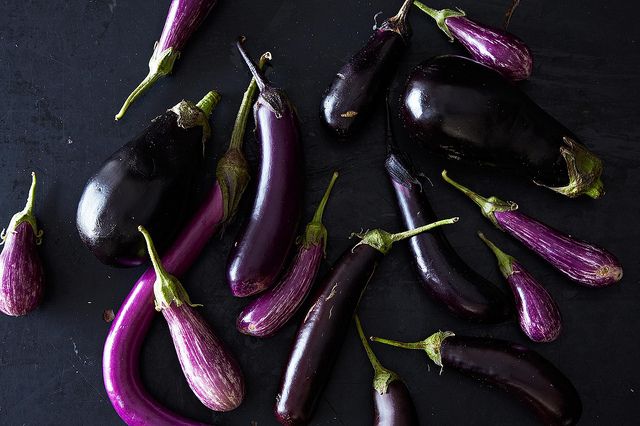 You probably have a long list of reasons why those eggplants are still lying on your counter. And we're guessing it's not just because you haven't gotten around to cooking them yet.

For starters, eggplants just look intimidating. Yes, the small ones -- the Fairy Tales, the Little Fingers, and the Babies -- are adorable and enticing, but the variety most commonly found in the US -- the Black Beauty -- is large, bulbous, and mysterious.

And then, once you've got to cooking, the results are, more often than not, disappointing. No one is spared from at least one encounter with tough, mushy, or bitter eggplant.

So why did you buy those eggplants in the first place? Because you knew their potential. You've tasted what eggplants can be -- and you're not ready to give up so soon.

Here's what to do with them. 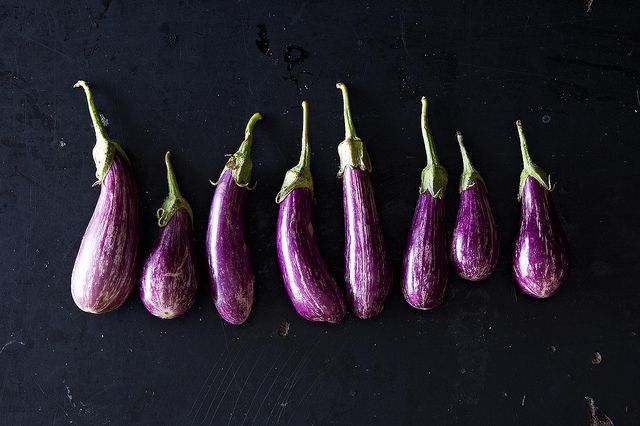 The number of eggplant varieties can be overwhelming. On top of that, recipes often suggest you find male eggplants, claiming that they have fewer seeds and a less bitter taste. In her book Vegetable Literacy, Deborah Madison writes that the gender of the eggplant doesn't matter as much as its age. Because it's the maturity of the eggplant that affects the level of bitterness, look for young, firm eggplants. The skin should be taut and free from soft spots.

To peel or not to peel?

Some cooks never peel eggplant (Mark Bittman is one of them), but it's really a matter of personal preference. Small, young eggplants like those pictured above can be left unpeeled. Large or old eggplants with tough skin can be easily sheered with a vegetable peeler or a paring knife. 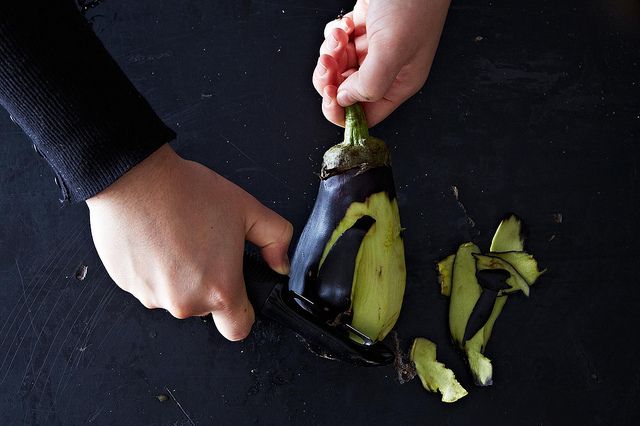 To prick or not to prick?

If you're planning to cook an entire eggplant in the oven or on the grill, leave its skin intact, but use the tines of a fork to create small holes in several places. These steam vents will prevent an eggplant explosion.

If you're going to char the eggplant over a gas stove, your decision is a bit harder. In his book Plenty, Yottam Ottalenghi does not recommend puncturing the eggplant before exposing it to the flame, yet this is not a universally accepted practice. One thing's for certain: pricking the eggplant will result in a bigger mess. Lay down aluminum foil around the burner to catch the oozing juices. 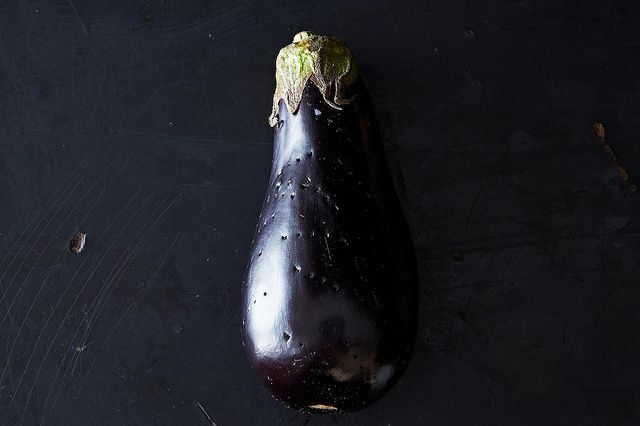 To salt or not to salt?

Salting eggplant is a controversial, potentially divisive topic. Some cooks (even some here at Food52) never salt their eggplant, while others swear by it. There are two primary reasons to salt eggplant -- and to wait patiently as the salt works its magic:

1. Many chefs, including Deborah Madison, believe that salting eggplant draws out its bitter liquids. This might not be necessary for young eggplants or for varieties known to be less bitter.

2. Russ Parsons does not agree. In How to Pick a Peach, he writes that salting does not remove bitterness (which he claims does not exist in the first place). Parsons salts eggplant for another reason: it draws water out of the cells, causing them to collapse. The shriveled cells are better able to absorb oil during frying, resulting in a texture that is creamy and silken rather than meaty or tough.

Though Parsons asserts that salting is only important for frying eggplant, not for grilling it, when in doubt (or if you're particularly sensitive to the bitter undertones), salt. 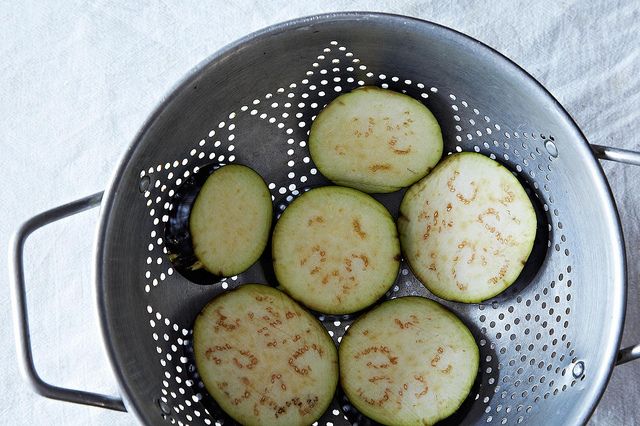 Cut the eggplant into circular slices, cubes, or quarters and place in a colander or on a baking sheet in a single layer. 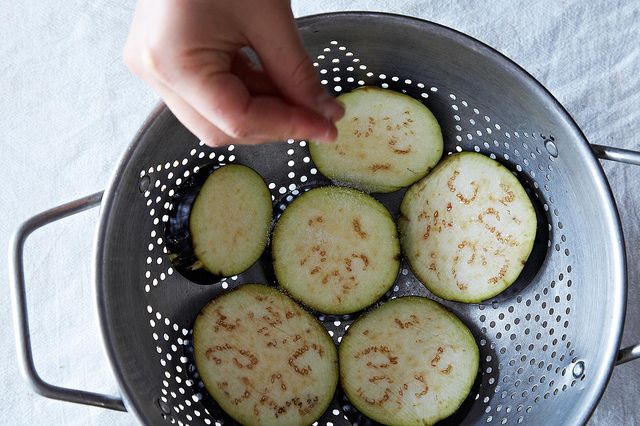 Generously salt the eggplant, making sure to cover each slice. You can top the first layer of slices with another layer as long as there is salt in between each group. 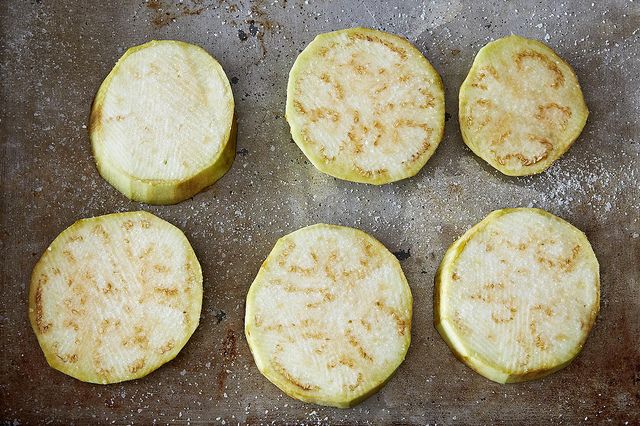 Let the eggplant sit for at least 30 minutes or, preferably, several hours. 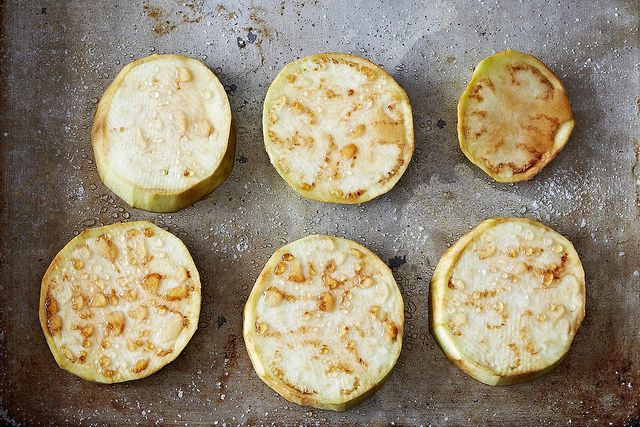 You'll see beads of moisture that have accumulated on the eggplant's surface. Blot the eggplants dry with a kitchen towel or paper towels. To remove excess salt, you can rinse the eggplant, then pat or squeeze it dry. 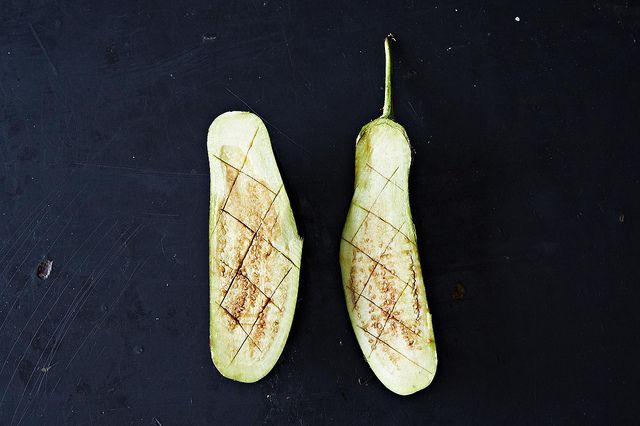 What's with the cross-hatching?

This preparation is useful for grilling or baking eggplants that have been cut in half lengthwise. Not only does deeply scoring the flesh help the eggplant cook more evenly, it also exposes more of the vegetable to seasonings, marinades, or salt (if you choose to use it). Once you've cross-hatched, lightly oil the exposed flesh and place the eggplant in the oven cut side up. For a more caramelized result, place the eggplant cut side down on an oiled piece of aluminum foil.

We know that there are many ways to prepare eggplant and we'd love to hear how you do it. Share your techniques in the comments below!

Bill M. September 7, 2013
I've had the best success in preparing eggplant by slicing it thin (unpeeled), sprinkling it with salt, and popping it into the toaster oven on an oiled cookie sheet. (Top shelf, "toasted" for the same length of time as needed for a "medium rare" piece of toast, flipped over, and then re-toasted for an equal interval.)The results are consistent: golden brown, non-bitter, and non-greasy. I use it as a pizza topping, the main ingredient in moussaka or eggplant dip, or as a layer in lasagne. In any form, it's wonderful.

Sarah J. September 11, 2013
I am convinced that toaster ovens are the best kept secret of the kitchen appliance world.

Slimfender November 4, 2013
I wholeheartedly agree with this. I use my toaster oven much more often than I originally thought I would, especially when only cooking for one!

lsgerman September 6, 2013
This is very helpful. I haven't grilled or baked eggplant yet, but really like it in this tajine recipe (http://food52.com/recipes/11056-moroccan-tajine-with-sweet-potato-chickpeas-and-eggplant). It doesn't call for salting the slices of eggplant. Just wondering if this would boost the eggplant flavor/texture? Thanks.

Sarah J. September 6, 2013
I definitely think that salting the eggplant ahead of time could help it to absorb many of the other flavors in the tagine. Russ Parsons would say that since you're not frying the eggplant in oil, the salting process is unnecessary, but on the other hand, Deborah Madison would probably recommend you do it! If you do salt the eggplant, make sure to either rinse (and dry) it well or adjust your seasonings accordingly. If you do try it with salted eggplant, please let me know how it turns out!

lsgerman September 6, 2013
Thanks Sarah, I will post here how it works with the salting.

Dr.Insomnia September 4, 2013
I recently grilled some eggplant after soaking it in my traditional kebab marinade (a simple preparation of herbs, lemon, oil, and seasonings). I've used this marinade on everything from lamb, beef, chicken, to almost any vegetable, with great success... but never on eggplant.

It was bad. Unlike the other vegetables, the eggplant soaked up all of the lemon juice in the marinade. I know eggplant does this, it's part of why I like cooking with it because it's so good at absorbing flavors, but I was not ready for how badly it would perform here. The marinade has worked perfectly well on just about everything else I've stuck in it.

So I'm a little skeptical at the need to score the eggplant, at least if it's being marinated for an hour. And if marinading with other grilling vegetables with less sponge-like power than eggplant, I would add the eggplant later, or user a lighter marinade on them.

Sarah J. September 6, 2013
That's an interesting case, Dr.Insomnia. I've never heard of eggplants suffering from over-absorption of flavors due to cross-hatching, but maybe the acidic nature of the lemon has a particularly strong effect. Like you said, I think it depends on how strong the marinade is. Thank you for the heads up!