Today: Merrill shows us how to make maple candy. 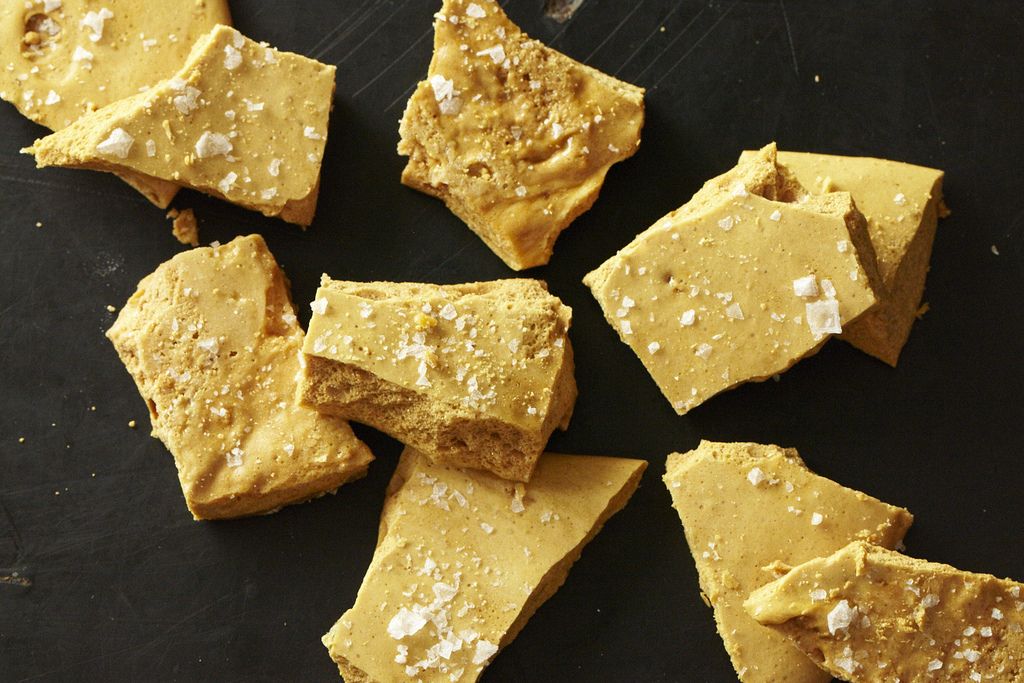 A few weeks ago, Amanda and I were tasked with a tough assignment: we were asked to be judges for an ice cream contest hosted by Just Food at their annual benefit, Let Us Eat Local.

We were a little nervous about eating all of that ice cream -- would we be able to get through all of the entries without being ill? Luckily, there were just 8 entries, rather than the 20 plus we'd imagined, and the contestants obligingly gave us dainty portions. We had plenty of room in our dessert stomachs to enjoy each and every one.

Our favorite -- and apparently the favorite of the other judges as well, since it took home the gold -- was Blue Marble's entry: popcorn-flavored ice cream with crunchy little bits of maple candy swirled into it. When we asked how he'd done it, the chef told us he'd used maple syrup to make his own version of honeycomb candy, also known as seafoam or sponge candy. (If you've ever wondered how a British Crunchie bar gets its funky texture, read on.) 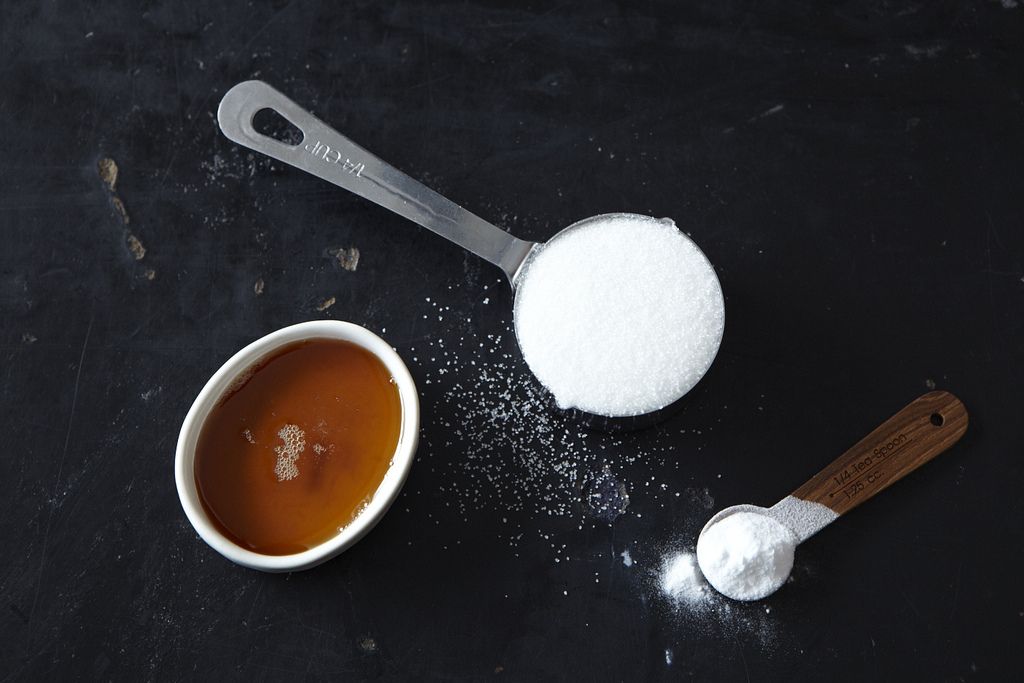 To make this almost otherworldly candy, which sort of reminds me of astronaut ice cream -- only much better -- all you need is sugar, honey (or in this case, maple syrup) and a little baking soda. Just as it does with cake batter or pancakes, the baking soda creates lots of air bubbles, giving the candy that incredible crunchy, airy texture that almost seems to defy science.

Of course after we'd tasted this new maple version, we had to hustle back to the Food52 test kitchen and try it ourselves. Here's how you make the maple candy: 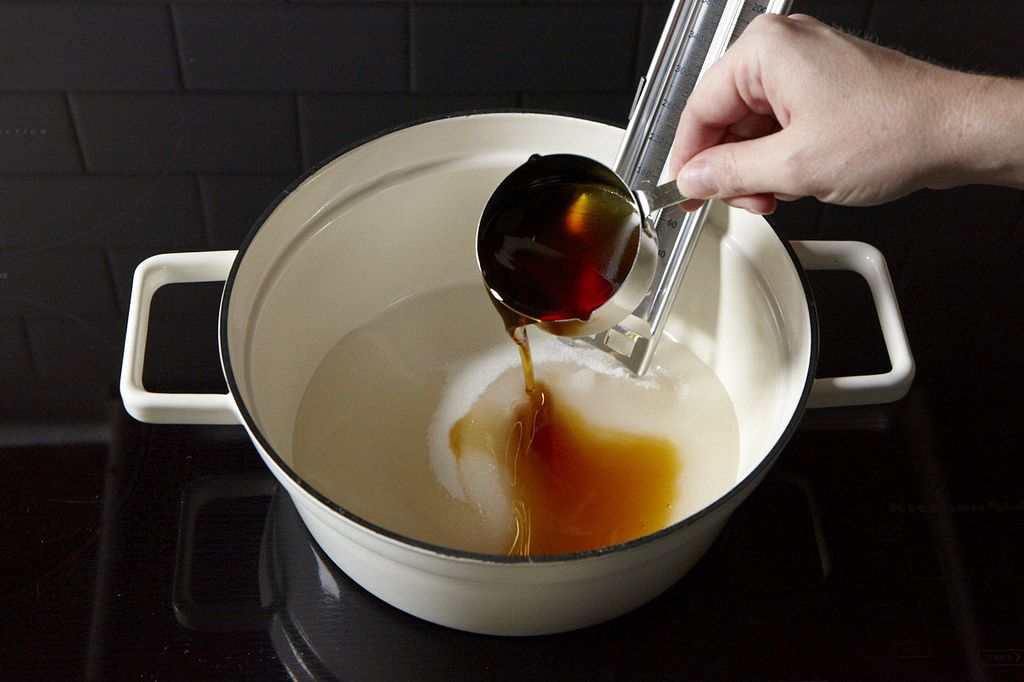 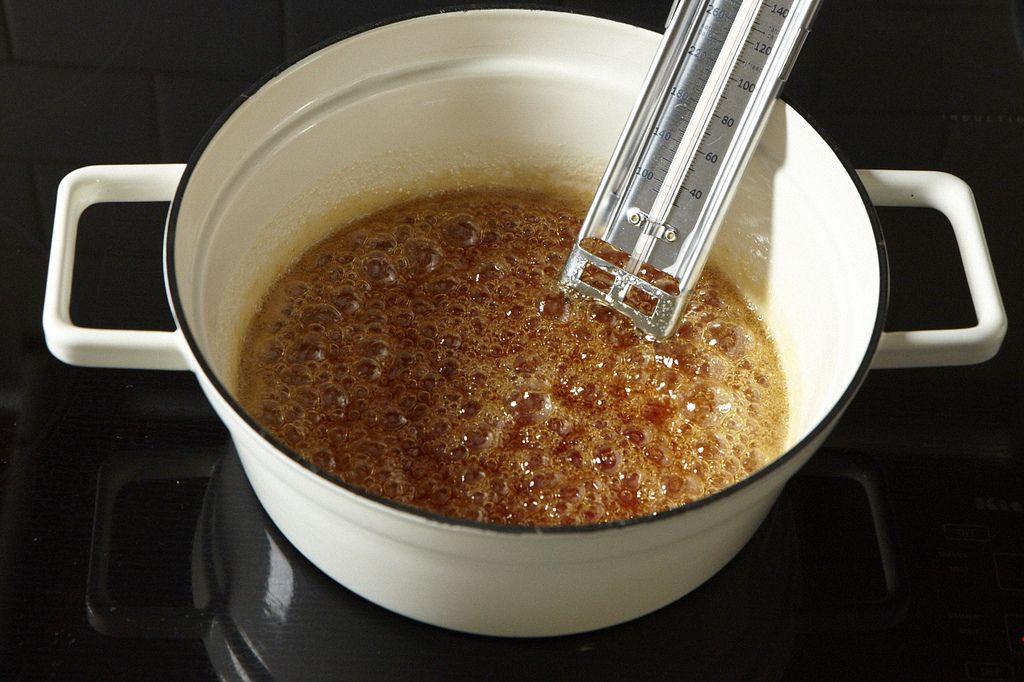 Combine maple syrup, sugar and a bit of water in a heavy saucepan and bring it to a boil. 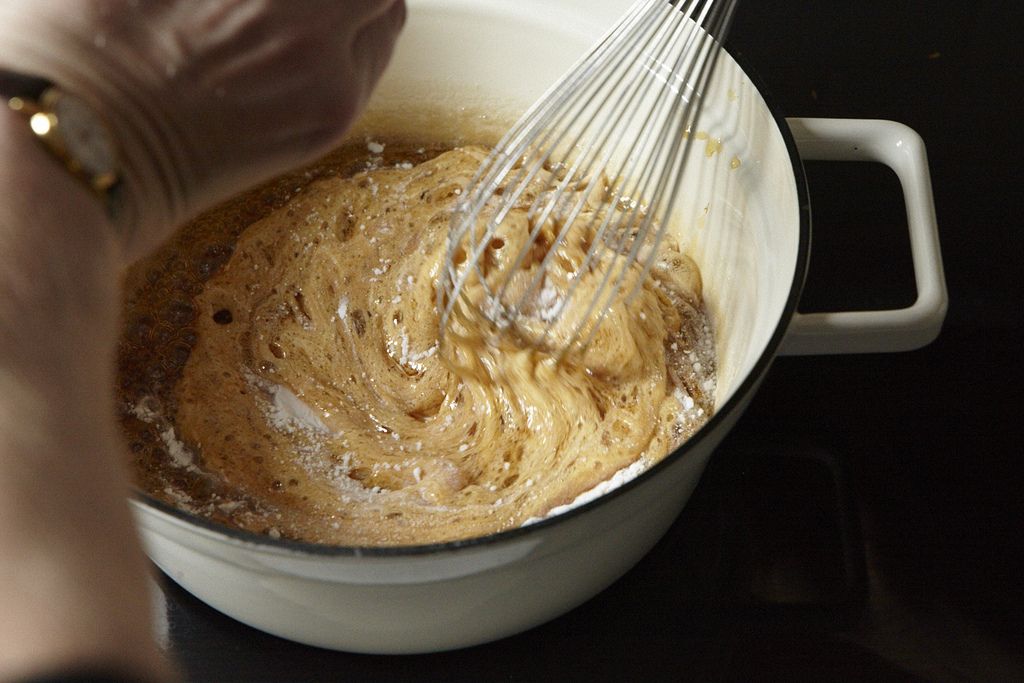 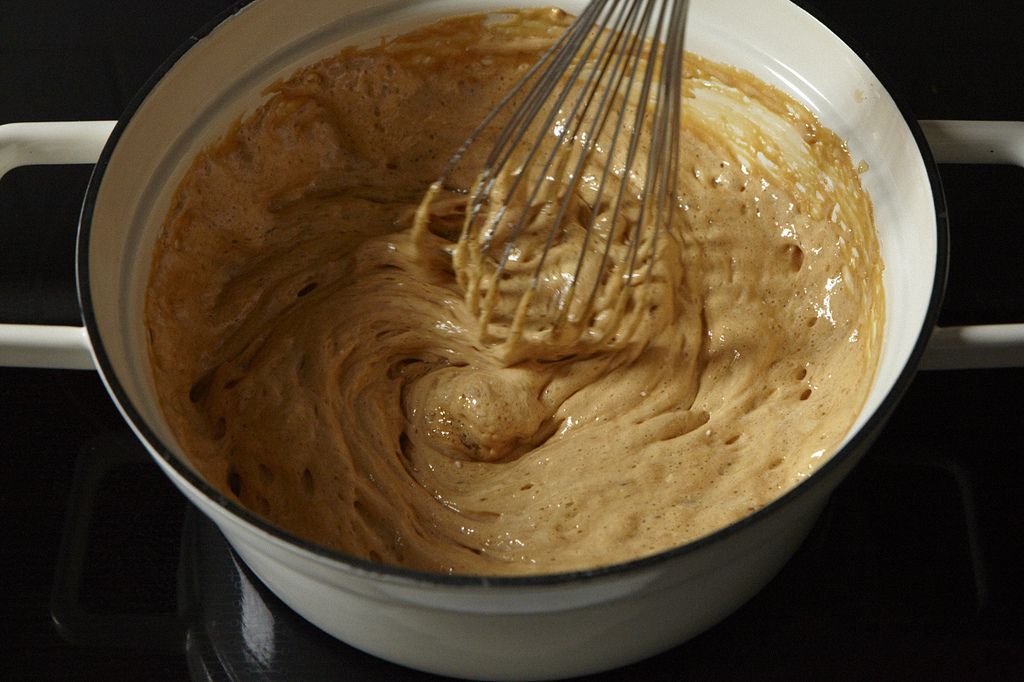 When the mixture reaches 300 degrees, take it off the heat and whisk in baking soda like mad. 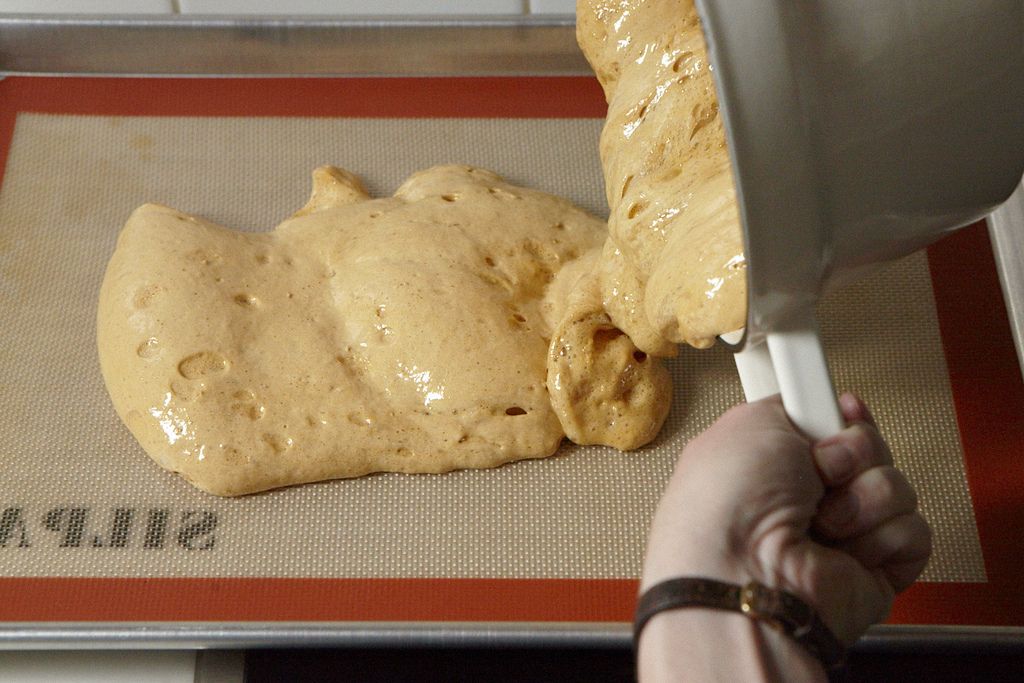 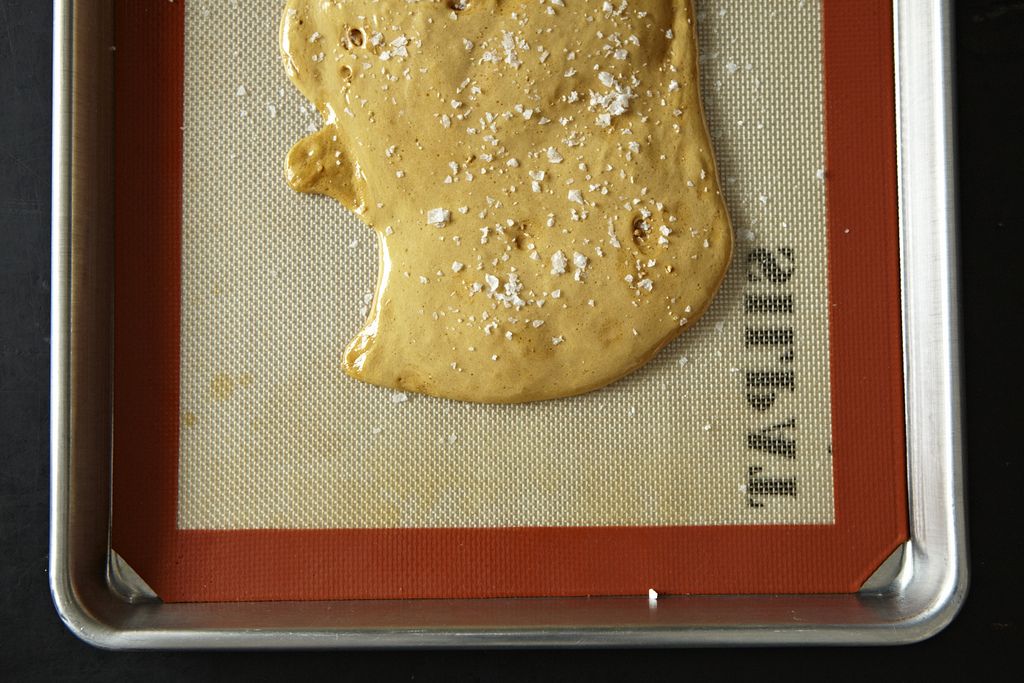 Immediately pour the candy (be careful -- it's hot!) onto a lined baking sheet and sprinkle some flaky salt over the top. 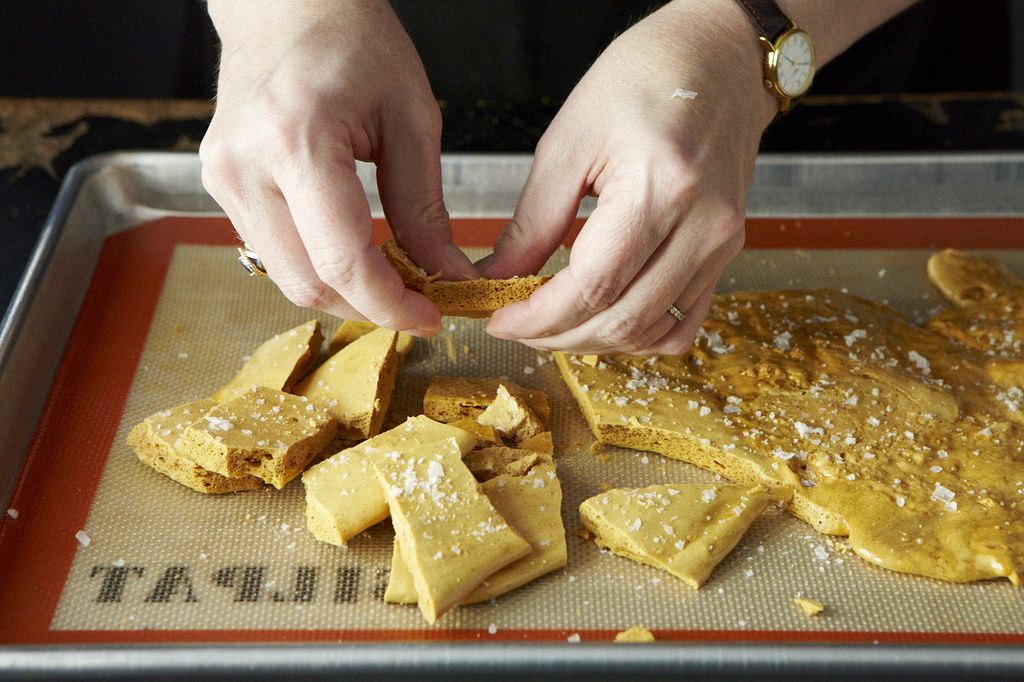 Let the candy cool completely, until it's solid. Break it apart with your fingers into rough, jagged chunks. Store in an airtight container (do not refrigerate!) for up to a week. Optional: dip the chunks in melted chocolate and lay them on a parchment-lined baking sheet to dry.

Steven W. October 6, 2017
I have been making peanut (and every other kind of nut) brittle this way for 20 years. Once the mixture is at 275 degrees, I add warmed nuts. Cook to 296 degrees, cut the heat and add the soda. It foams up rapidly. Pour it out and smooth it will it's still bubbly. Light and airy, def crunchy.

Brigid M. May 3, 2015
In NZ we use golden syrup and call it hokey pokey. Giving this a go to see how it turns out vs the kiwi classic

marymary April 16, 2014
SHEESH. I finally bought a zester today because of Food52 and now I have to go back and get a candy thermometer. You guys are gonna break me. :-)

Can't wait to make this. This will be my first attempt at candy. Yay! I'm proof positive that an old dog can learn new tricks.

My 90-year-old mom and a sister-in-law have always been the candymakers in the family, so my Easter contributions will come as a big surprise. Thanks for the inspiration.

I'll dip in chocolate hoping to ward off the humidity, although I doubt it will last that long.

I_Fortuna October 27, 2013
After reading the entire recipe carefully I noticed the following: As for the candy burning, it may be the type of pot and how high the heat is. My stainless gets much hotter than my non-stick at the same stovetop setting. I noticed an enamel pot was used here. Enameled cast iron might be the best choice. Cast iron heats slowly and evenly. The recipe mentions to use a "heavy saucepan". I think it works best if the mixture is brought to 300 degrees very slowly and then removed from the heat to add the baking soda. Candy is one of those things you can't turn your back on and must be stirred constantly and a thermometer needs to be used. Candy making is an art. All elements need to be just right.
Also, if you read the part in the body of the recipe where it shows adding the maple syrup, it states to use "a bit of water" added with the syrup. Exactly how much is not mentioned. Water is not mentioned in the list of ingredients used.
I hope this helps. : )

Jentopp October 26, 2013
I never comment on recipes I've made, preferring to post a link to them if all works out but I just had to with this one. I was so excited to bust out my new thermometer to make this. However, waaaay before the mixture got to 300 degrees, it began to burn. I removed it from the heat and thought, what the hell, I may as well keep going with the baking soda. It looked good but definitely tasted burnt and not at all like maple. Could it be that the instructions left something out?

tara_o October 25, 2013
I have been raving about these candies since the late Nineties, when a boyfriend from Montreal introduced then to me. I am so happy now.

gina G. October 23, 2013
I am soo gonna be making this...with maple syrup from our own trees, the darkest (strongest maple taste) we still have on our shelves. The darkest, strongest syrup used to be called Grade B which has nothing to do with quality -- I think Vermonters so labelled it to scare off flatlander tourists so they would buy the Grade A stuff and we could keep the Grade B for ourselves

I_Fortuna October 23, 2013
If your area is humid like ours, store your honeycomb in a paper bag, cardboard box or a glass jar with one of those little silicon packets that come with some teas and foods. Paper or cardboard absorb moisture very well. That is why many foods like cereal, tea, pancake mix are packaged in cardboard, wax paper and paper bags.
I wish there was a no-sugar (diabetic) version of this recipe : )

Mari G. October 23, 2013
I love this, but I live in Florida and find this gets sticky from the humidity. Do you have any tips? Thanks,m

John A. March 23, 2014
Use silica gel packets that come in some packaged foods to ward off moisture.

LeeLeeBee October 23, 2013
Since moving to Australia, I've come to adore honeycomb candies, but had no idea it was so easy to make at home! Cheers!

HalfPint October 22, 2013
My friend's neighbor makes and sells this candy, in peanut butter flavor. Amazing texture to go with that addictive flavor. And I love it's Cornish name "hokey pokey" :)

aargersi October 22, 2013
Oh Dear, this is the exact sort of thing that sends me into and eat myself sick, drink hot tea until it passes, rinse, repeat cycle. Walnuts might be kinda tasty in there too. Hmmm

Lindsay-Jean H. October 22, 2013
This is going to be the recipe that makes me finally break down and get a candy thermometer.

chocolateandvegetables October 23, 2013
I know! Me too.

Jentopp October 26, 2013
Be careful! I just made it with a brand new thermometer and it burned before it got to 300 degrees!