How to Make Potato Gratin Without a Recipe

Today: You don't need a recipe to make the ultimate holiday side: creamy, perfect potato gratin. 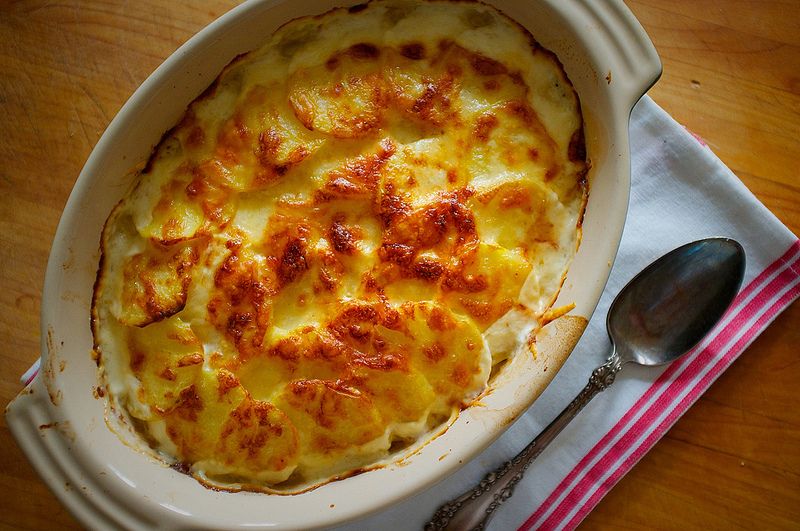 Have you ever had a friend who knows no strangers? The kind of genuine person to whom everyone in the room gravitates -- someone who doesn't have to work at meeting new people, because somehow it is coded into their DNA for others to like them?

For me a potato gratin is just such a friend. A friend who hangs out with all the cool entrees too: an herb-crusted roast beef taking a bath in a platter of flavorful juices or a perfectly roasted chicken with crackly brown skin are its best friends.

But, to its credit, a potato gratin knows enough to complement all the other dishes and, with the exception of a few rules, remains unfussy enough not to need a recipe and somehow is always perfectly put together for any holiday gathering.

How to Make Potato Gratin Without a Recipe

1. Peel your potatoes. For a 10-inch oval gratin pan, I like to use six to eight medium-sized Yukon Gold potatoes -- about 2 1/2 pounds. (Don't worry: If you overdo it, you can snack on leftovers after step 6.) 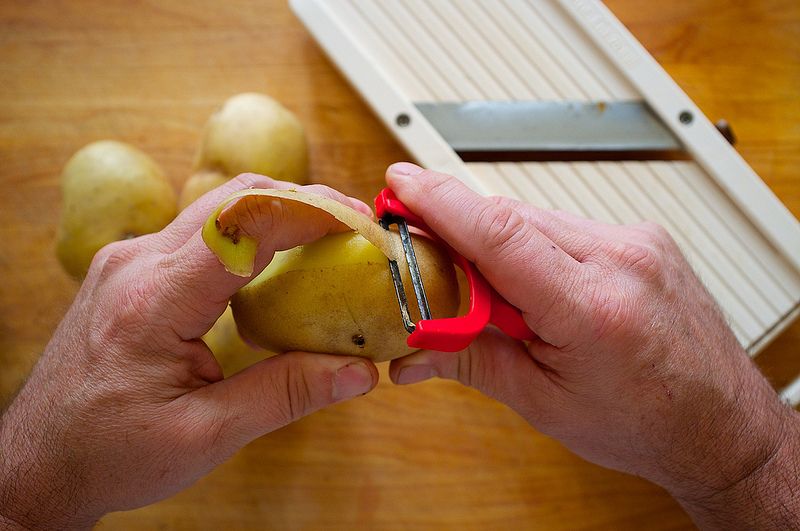 2. Slice the potatoes an 1/8-inch thick, ideally on a mandoline right into a heavy bottomed pot. Add a few minced cloves of garlic, about a teaspoon of salt, and roughly equal parts of water and milk to cover the potatoes. 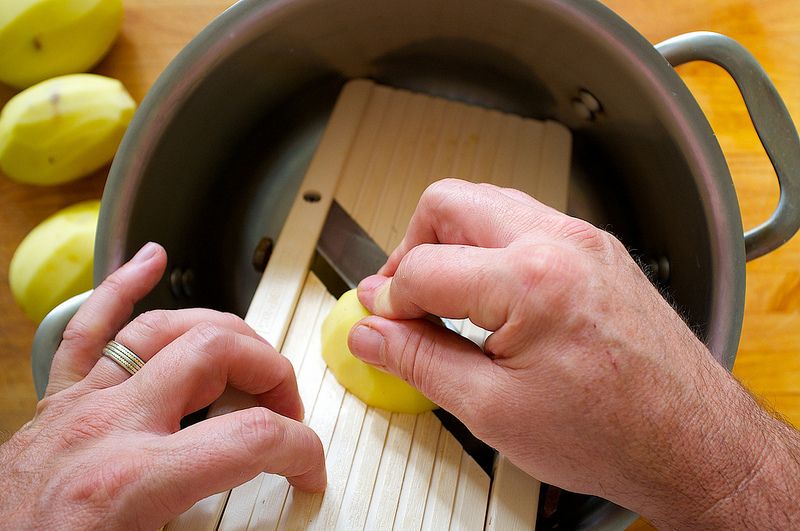 3. Bring it to a gentle boil over medium heat and cook the potatoes till just tender but not falling apart, then drain. By cooking the potatoes most of the way through in flavorful liquid, you don't have to worry about exact quantities of liquid and seasoning later on. 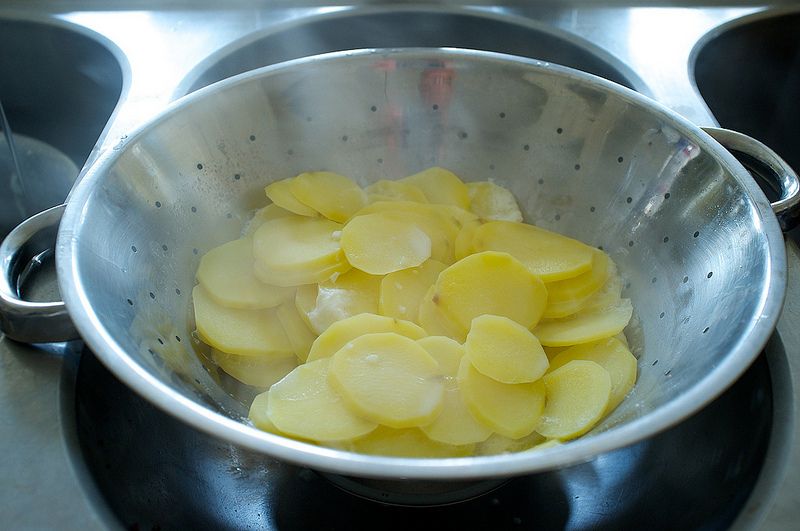 4. While the potatoes are cooling, grate approximately 2 1/2 cups of Gruyère or Comté cheese -- they are traditional but expensive. Other cheese in the family would be gouda, fontina, or American Gruyère. 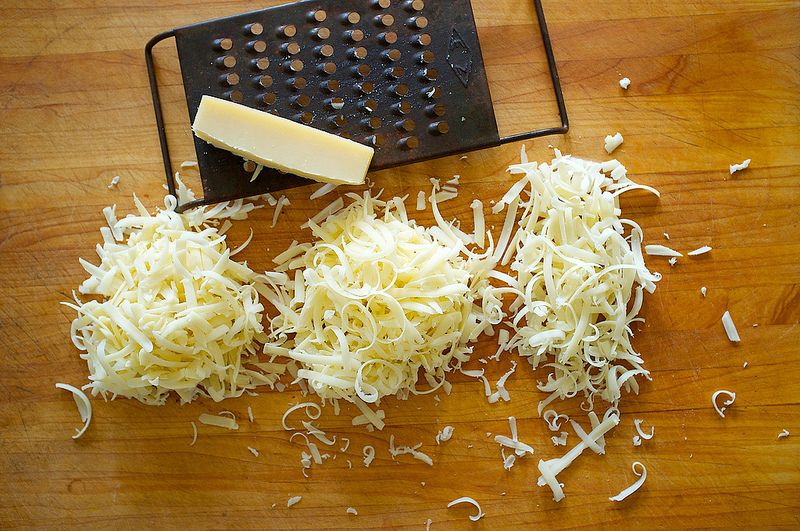 5. Get out an oval gratin, or any casserole, pie pan or dish you choose. Just take note: with a smaller circumference dish you have more creamy interior and less crunchy top and, obviously, the reverse is true for a larger gratin. Place around half the potatoes into the gratin (they don't need to look pretty, yet). Season with salt and white pepper. Top with half the cheese and drizzle about 1/2 cup of cream over the top. 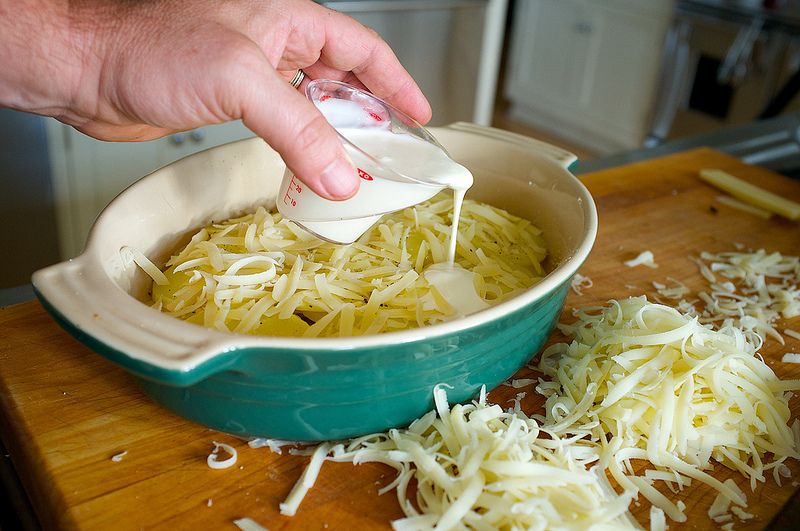 6. Starting with one slice of potato placed in the middle of the gratin, spiral the potatoes around until you reach the gratin edges. Make it look pretty -- it makes a difference. 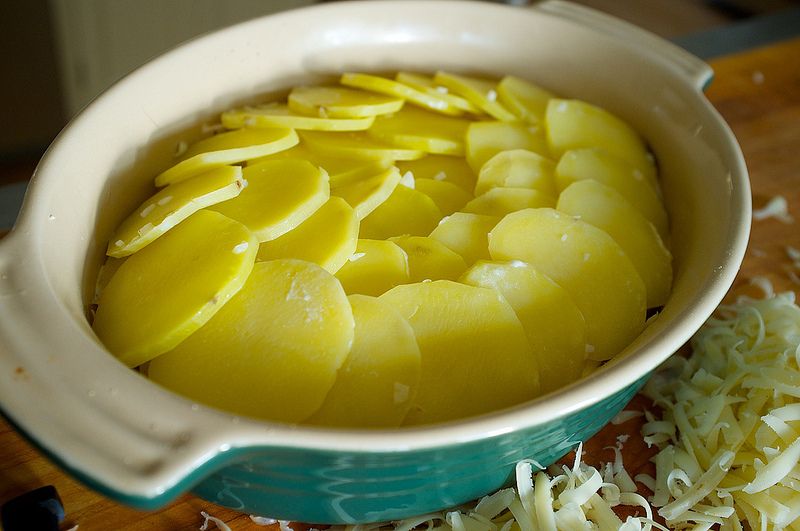 7. Top with the remaining cheese, then drizzle another 1/2 cup or so of cream over the top and around the edges so it gets to the bottom, too. 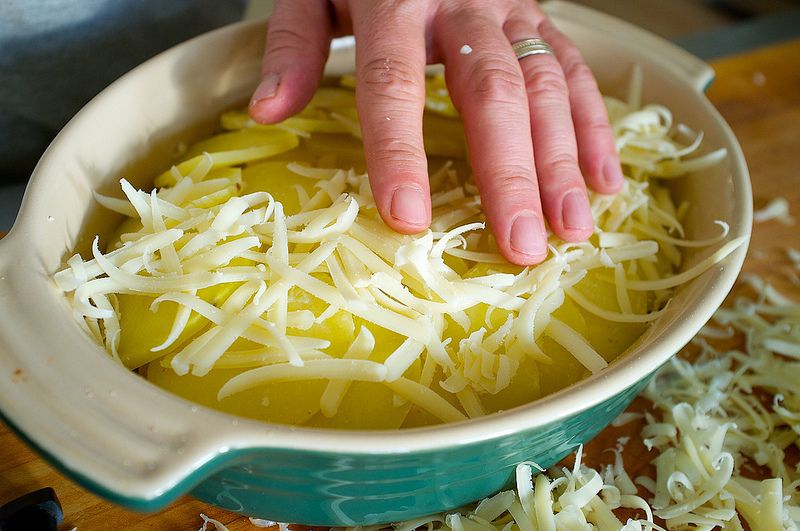 8. Bake at 425? F until brown and bubbly, about 30 minutes. Don't overcook the gratin so it dries out. You want a little cream to remain on the bottom. Serve.

We're looking for contributors! Email [email protected] and tell us the dish you make in your sleep, without a recipe.

cookbabycook December 27, 2020
Looks great, tastes divine, and the hardest part is peeling all the potatoes - that made this an Instant Keeper! We've taught our college kids how to make it so they impress their friends now, too. Thank you.

trackhorse September 28, 2015
Please use the food-holder when slicing on a mandolin!

Elizabeth W. January 11, 2014
I *thought* cooking the potatoes first would be the best way. Definitely not in the Betty Crocker and Martha Stewart recipes (which turn out rather blechy).

KLE November 26, 2013
Great idea, but it would be nice to have weights for the potatoes & cheese

soupcon November 26, 2013
Substitute whipping cream for the half-and-half and nix the cheese and you have my potato dauphinois/scalloped potato/potato gratin dish made always without reference. I don't bother to artfully arrange my potatoes but heat them to the boiling point with the cream and garlic and then dump them into a deep buttered baking dish and bake them covered for about 3/4 of an hour and uncovered in a 300 degree oven until browned and done. Cooking at a high heat may split the cream. Great cold with a salad the next day.

tilemaker November 26, 2013
perfect timing, as usual with this blog. I opened up my computer to look up a recipe and up this popped on F-book! Hey, question, since I hope to do a lot the day before and these are boiled first, can I get this all ready for the oven but instead keep it in the fridge until a bit before baking? Please let me know if you think that will work! thank you

Shannan November 25, 2013
I use a Nigella Lawson recipe where you simmer the potatoes in seasoned milk (just enough to cover) then dump it all into the baking dish to bake. Delicious and easy.

the T. November 25, 2013
Jaques Pepin's Gratin Dauphinoise cooks the potatoes in 100% milk- you *save* the milk and use it in the gratin because the starch from the potatoes themselves thickens the milk. Nothing gets thrown away. I'm doing this myself for a Tday potluck I've been invited to. http://blogs.kqed.org/essentialpepin/2011/09/11/gratin-dauphinoise/

Eric S. November 25, 2013
Sounds great but I wonder if you couldn't use the discarded boiling liquids for something? Seems kinda like this could be used for something considering it has the added starch in it now. Seems wasteful as wellt :/ Any ideas?
Author Comment

thirschfeld November 25, 2013
They would work great for bread but obviously would add a garlic flavor too.

Greenstuff November 25, 2013
Great timing--I almost answered a hotline question this weekend by saying "you don't really need a recipe to make a gratin." I make mine pretty much as you do but never cook the potatoes first. And often don't peel the potatoes. (Unless my sister-in-law is around; I know unpeeled potatoes bug her.)