Today: A genius trick for oven-crisped chicken wings that might be even better than fried (plus a magic dipping sauce you're going to use on lots more than wings). 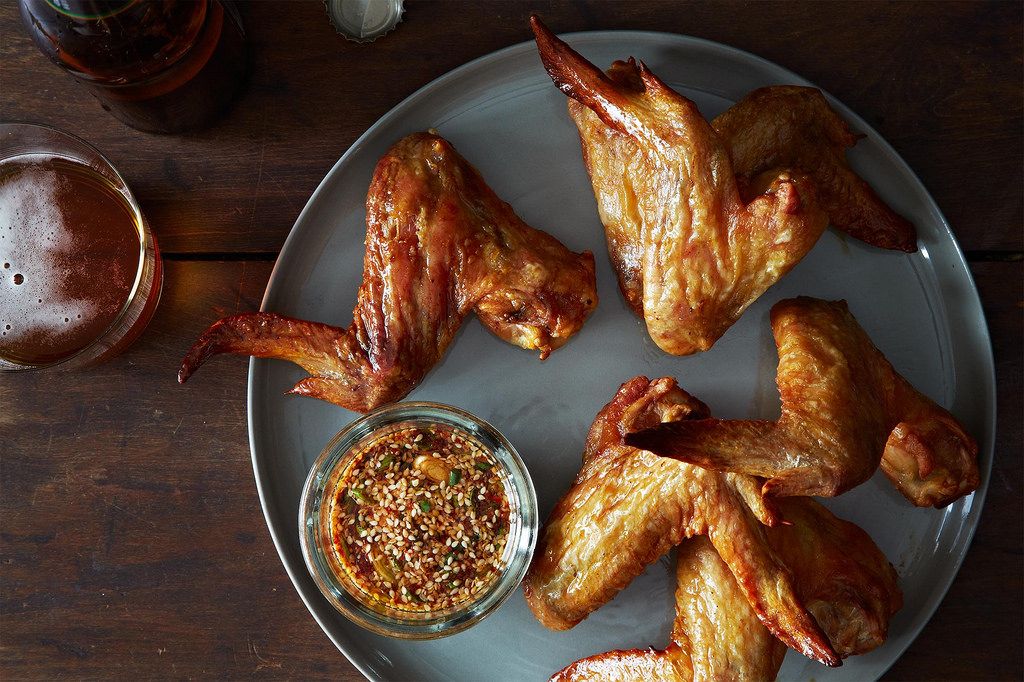 This Sunday, a supply of world-class snacks is going to be the difference between an epic party and a day of too much TV and a bad Dorito hangover.

A platter of blistering, toffee-skinned chicken wings would clinch it.

But that doesn't mean you need to be orbiting a deep fryer moments before your house is filled with people -- not unless you want to (I don't). 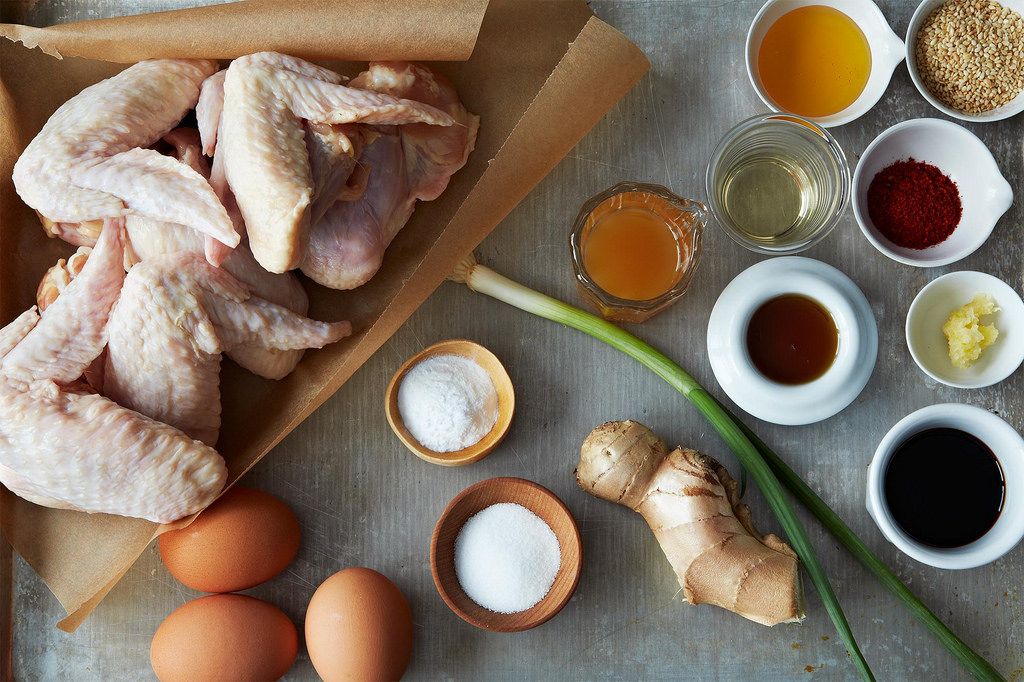 If you're smart about it, you can make your wings almost entirely the night before, sending them into the oven just in time to make the house smell cozy in the way that only roast chicken can. But you do have to be smart about it.

You'd think wings -- bundles of mostly skin and fat -- roasted in a really hot oven would crisp up by default, but baked wings tend to either dry out before they develop that taut snap, or stay slack and a little chewy. See Melissa Clark's admission here. They're not bad, but they could be electrifying. 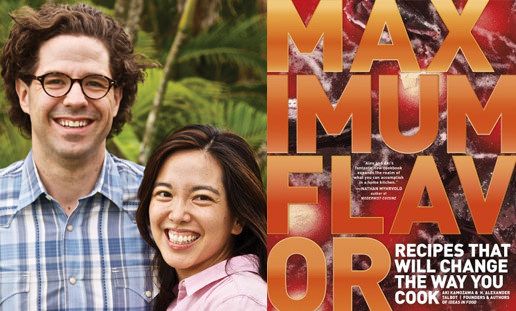 This is where Ideas in Food's Aki Kamozawa and H. Alexander Talbot, in their latest book Maximum Flavor, changed the game. They developed a low-impact at-home version of Korean-style chicken wings (if you're not familiar, they're normally twice-fried and have the power to turn people into starved coyotes with one bite).

"Alex spent weeks on the wings, roasting and re-roasting a million different ways until we were satisfied that they were perfectly crispy, juicy, and seasoned," Kamozawa told me.

The solution he landed on was a 3-ingredient marinade: egg white, salt, baking soda. And one more unofficial ingredient: time. 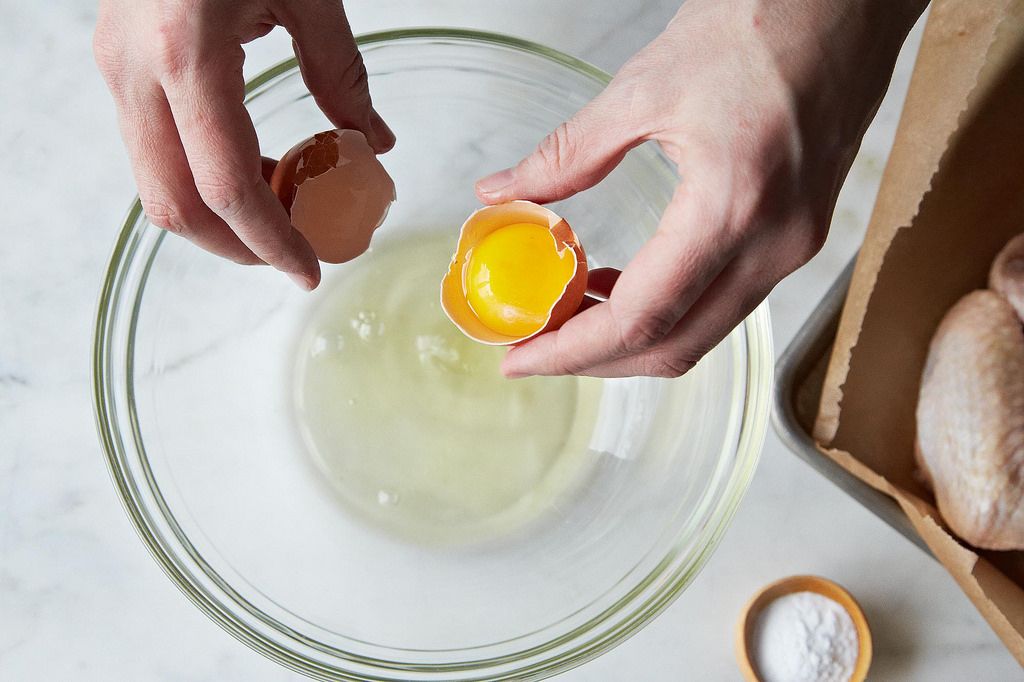 The egg white was borrowed from a General Tso's recipe Kamozawa was developing using velveting, the traditional Chinese technique in which chicken (or other delicate ingredients) are coated in egg white and cornstarch and par-cooked to keep them from drying out, leaving them soft and velvety. 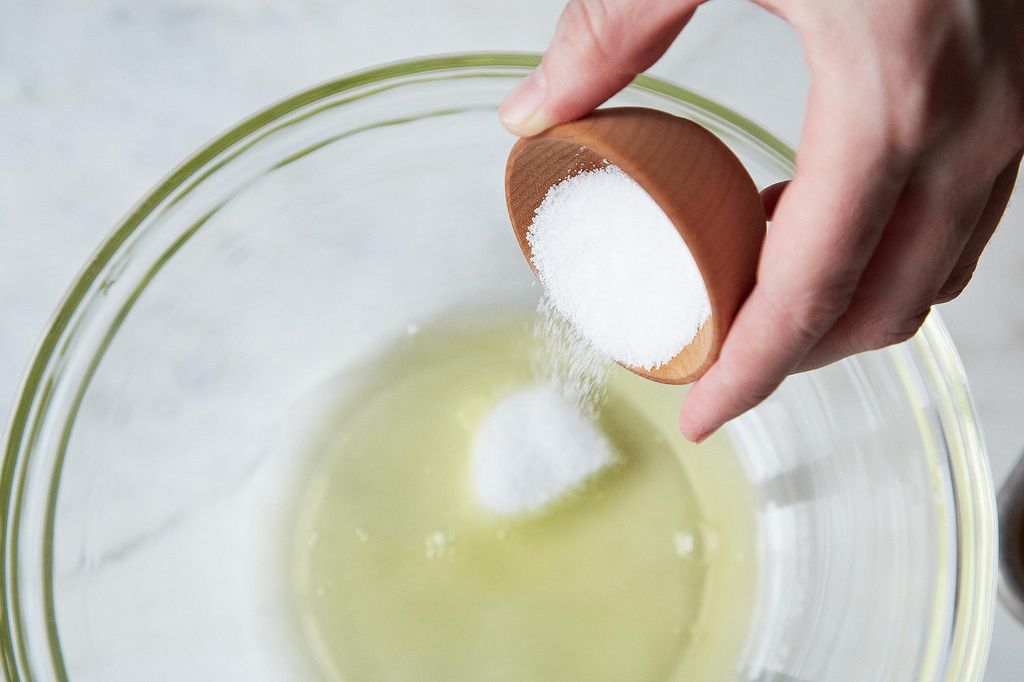 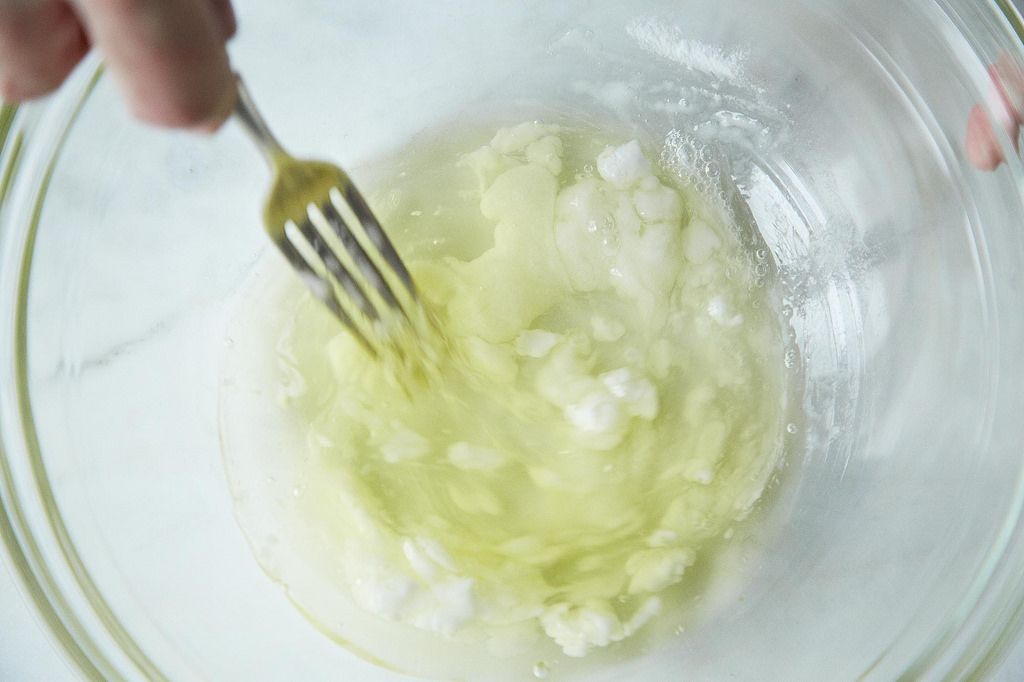 They combined this with the seasoning and texture-improving powers of salting ahead (a.k.a. dry-brining), made famous by Judy Rodgers, along with the secret side of everyone's second favorite leavener, baking soda -- "often used for its browning effect in many recipes from pretzels to stir-fried shrimp," Kamozawa explained. (For more on tweaking browning effects by varying pH levels, see López-Alt.) 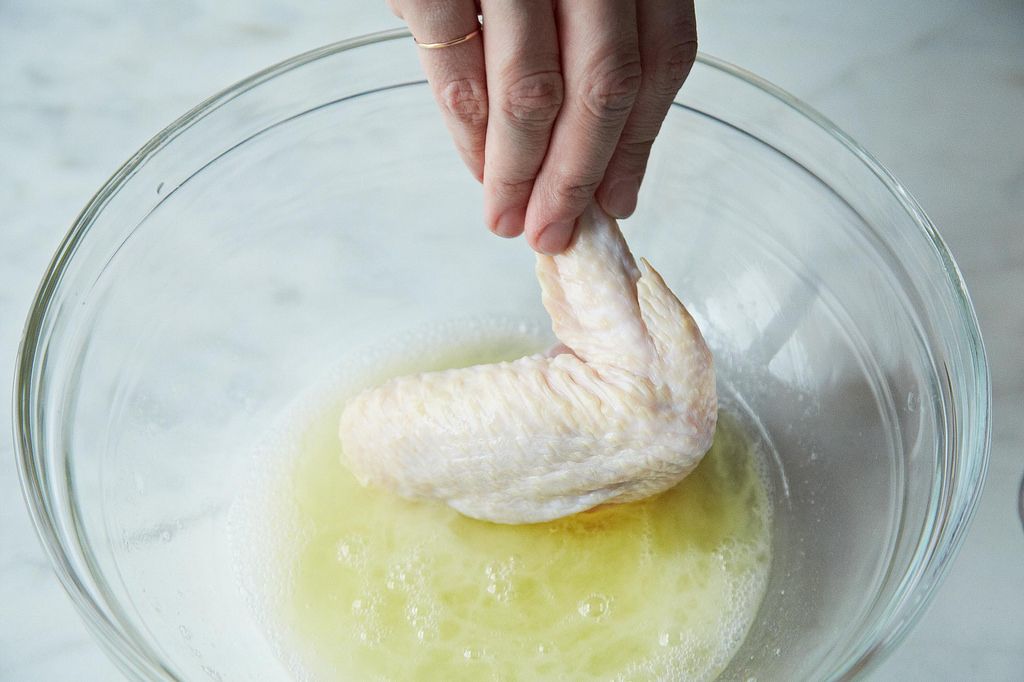 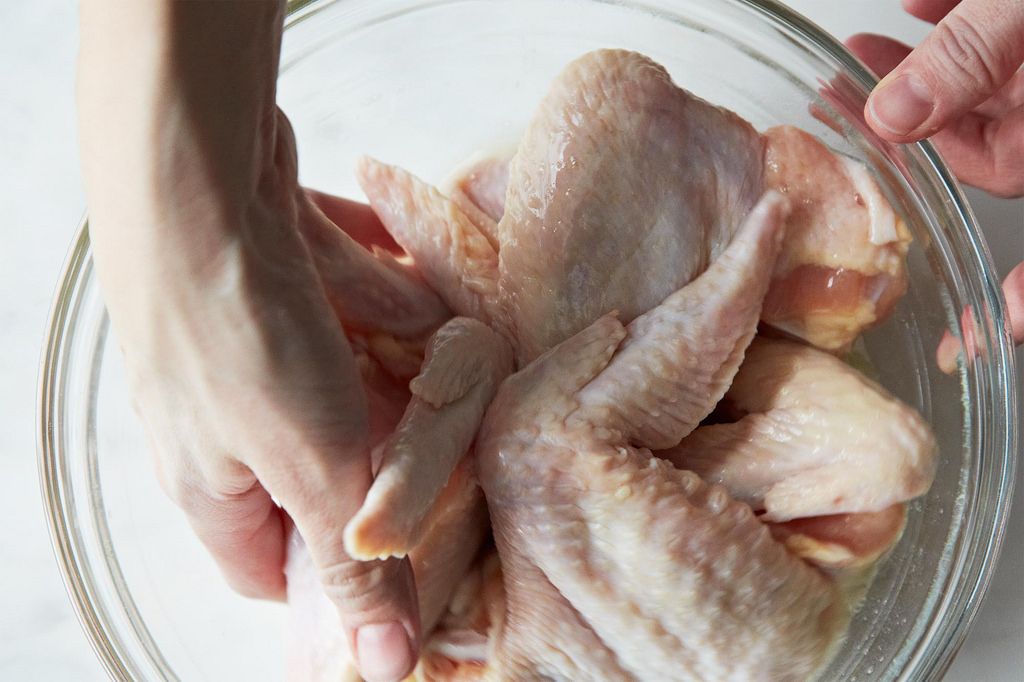 Thanks to Ideas in Food's legwork, this method is virtually hands-off -- just tumble the wings in those 3 ingredients, then leave them on a rack in the fridge to dry overnight. (Leave a note so nobody panics when they go for the milk.) 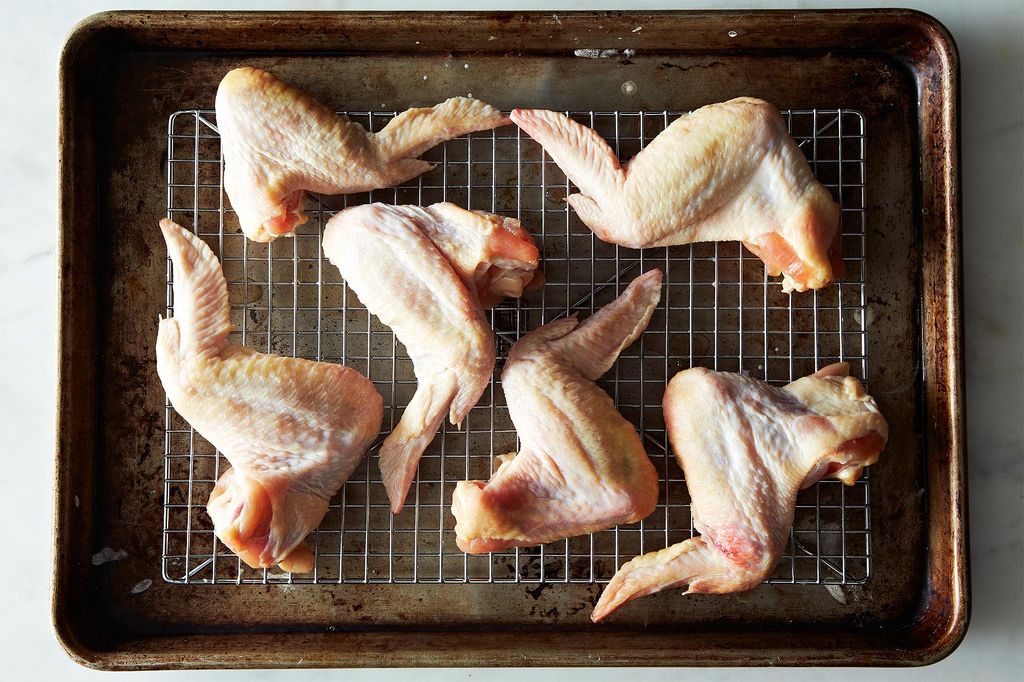 The next day, the tray goes straight into the oven. 35 minutes and a couple of flips later, it's party time. 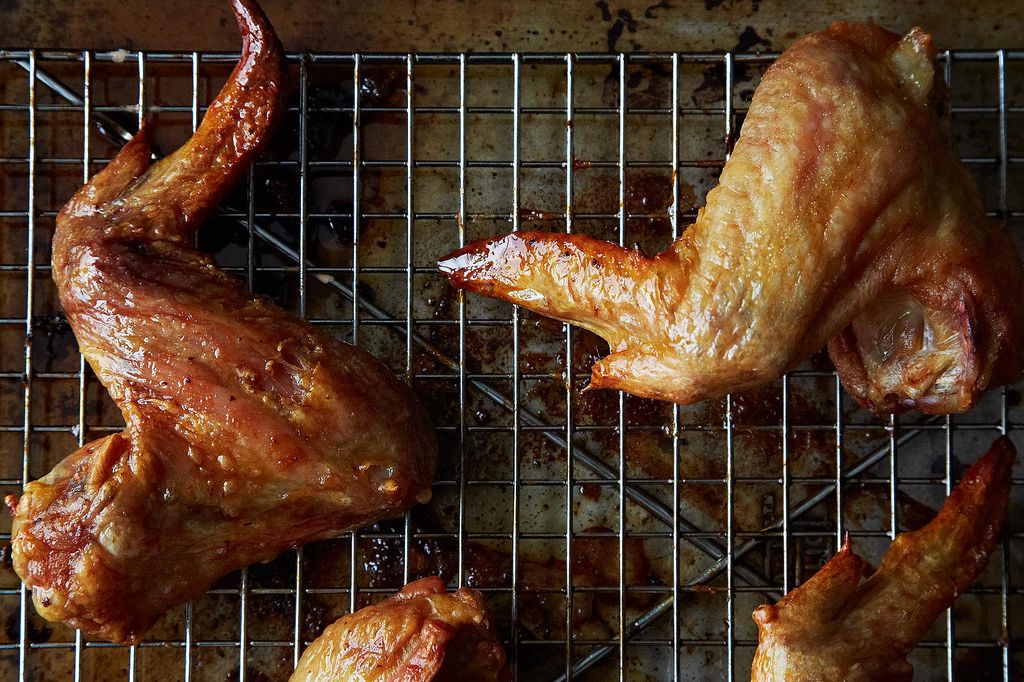 For yours, you can use the tinier sections called drumettes and flats or wingettes -- they might be easier to find and to dunk. But Kamozawa and Talbot prefer the whole, unclipped wings, which they find are slightly juicier and have more crispy bits. 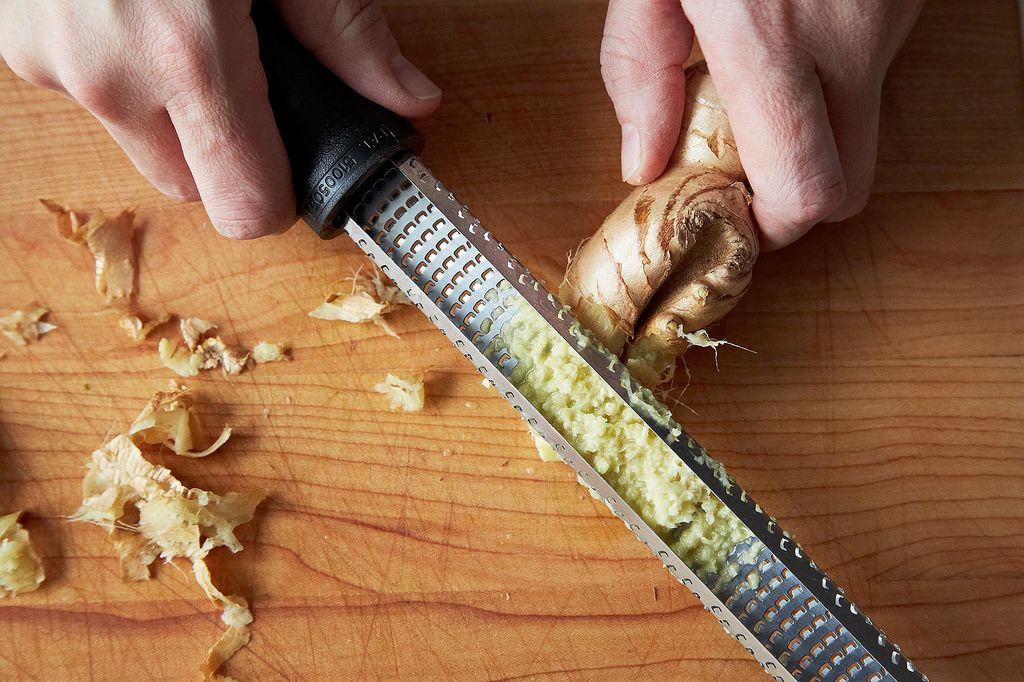 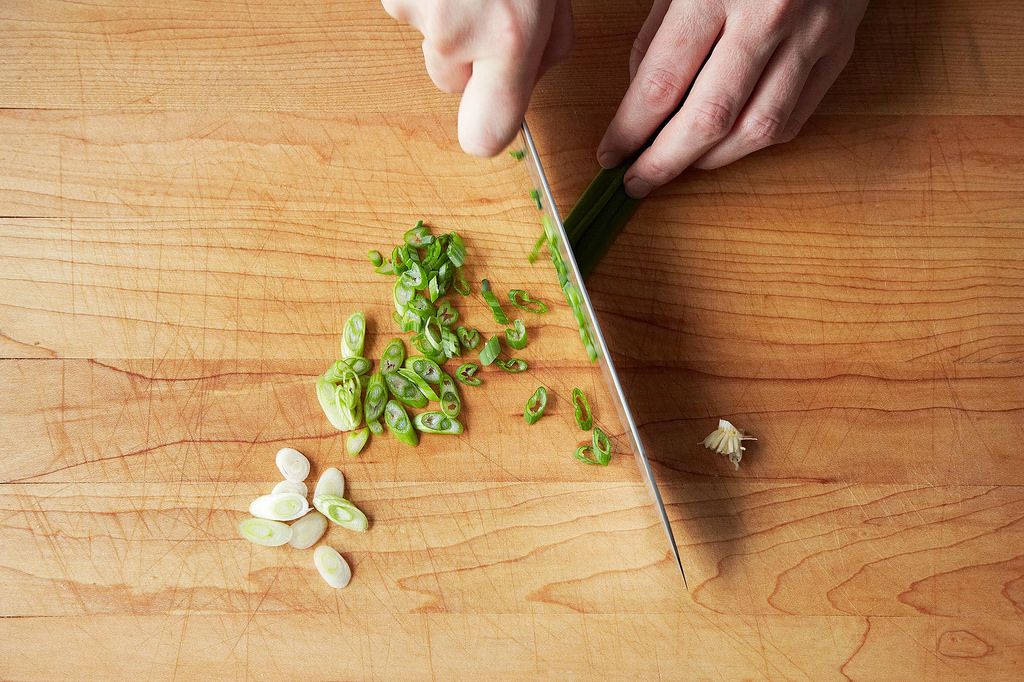 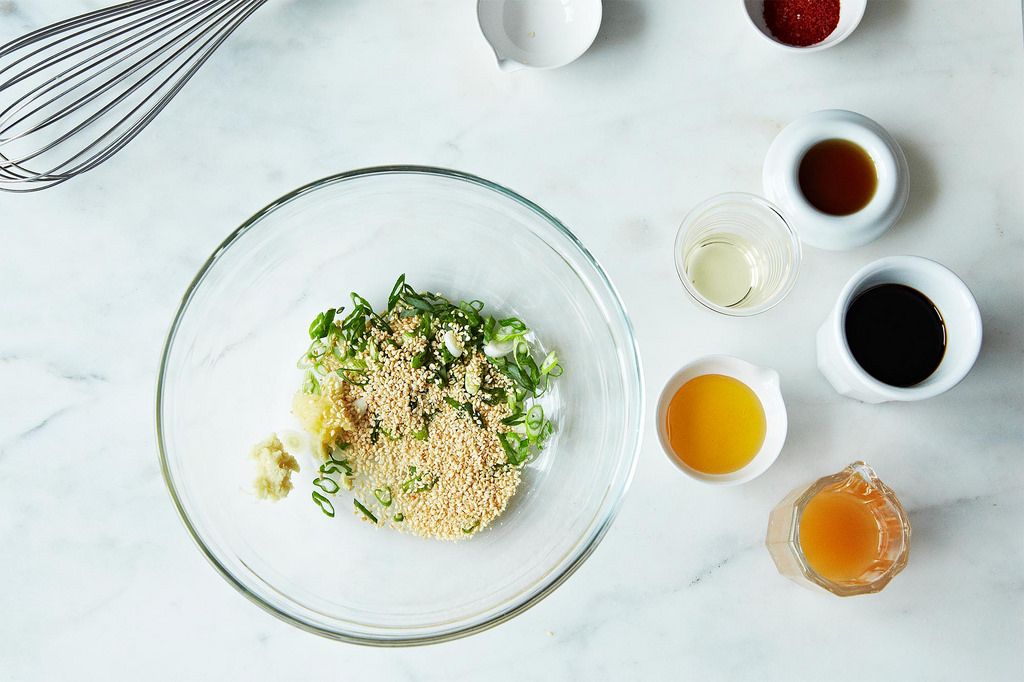 Whichever way you go, you'll need this dipping sauce, which provides a last minute wash of brightness and spice -- meaning the wings can actually sit out and stay crisp, unlike that half-eaten tray of Buffalo wings, which is never coming back. 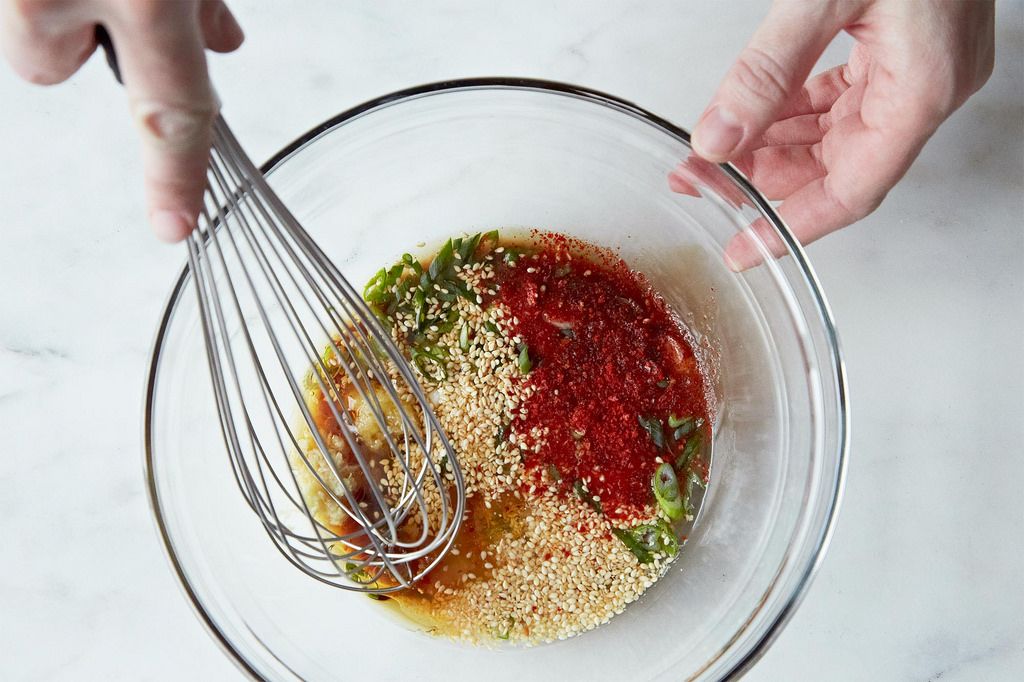 "You can also use the sauce with fried dumplings, roasted vegetables, fish, or even drizzled over a grilled steak. It goes everywhere and makes almost everything taste better," Kamozawa told me. I can vouch that we've put the sauce on most of the above.

Just think of all the other stuff you can dip at your game day party -- I'd only hold back on the Doritos.

Got a genius recipe to share -- from a classic cookbook, an online source, or anywhere, really? Please send it my way (and tell me what's so smart about it) at [email protected]. Big thanks to Matt Sartwell at Kitchen Arts & Letters for this one!

Molly F. February 23, 2014
Serving these wings for dinner...what would you suggest for accompaniments?

Kristen M. February 23, 2014
Rice would be ideal -- it's a good place to splash the extra sauce. We dunked all kinds of vegetables in it too. Roasted broccoli would be great, for example.

Kristen M. February 3, 2014
If you go to the recipe page, there's a little print button below the photo on the left side: http://food52.com/recipes/26380-ideas-in-food-s-korean-style-chicken-wings

James S. February 2, 2014
I made these tonight for the Super Bowl. The sauce was very good and has a nice kick. Sadly, I was only able to let them dry in the fridge for a couple of hours. The skin came out crispy, but not super crispy. Next time, I will plan ahead and give the wings the 24hrs in the fridge, which I think is key to crisp skin.

Lukshen February 2, 2014
Not quite genius...
The wings are perfectly crunchy and spraying the rack while in the pan saved a bit of scrubbing. I just wish the delicious sauce stuck to my wings...

anotherfoodieblogger February 1, 2014
My husband made these tonight (after I printed the recipe a few days ago and plunked in front of his face), and they were GENIUS! My husband has been trying for almost 20 years to come up with a crispy non-fried wing recipe, including both oven and grill. These were over the top, and the dipping sauce is to die for. Well done, well done!

Maryna February 1, 2014
Thank you for the recipe, everything was quite easy to make and the result was terrific. Even 5 hours after baking the wings were still delicious and tender. The last minute it turned out I din't have any apple juice for the sause so I used grape juice instead, I think it didn't spoil the sause at all. Greetings from Ukraine!

Kristen M. January 31, 2014
I'm not sure if Aki & Alex tested baking powder, but I can vouch there was no bitterness or metallic taste with this version.

Callie C. January 30, 2014
these sound like they would be so addicting...in the best way possible. thanks for the recipe. it really is genius!

Deborah January 30, 2014
I want to try this recipe on SuperBowl Sunday...it looks great. What can I substitute for the 3 Tbsp of apple juice? I am very allergic to apple juice...

Kristen M. January 30, 2014
Is pear juice okay? That might be the closest in sweetness and flavor.

Ellen F. January 29, 2014
The genius of this recipe seems to be all in the sauce, which is great since I'm not interested in the wings, per se, as an herbivore! I wonder if the sauce could be incorporated into this awesomely flavorful recipe for "Buffalo Cauliflower Wings" Check this out…..http://veganamericanprincess.com/touchdown-everyone-wins-super-bowl-menu-7-kick-off-recipes/

Marie-Helene A. January 29, 2014
Hi, my name is Marie-Helene.I am French but I have ived in England for 31 years. An English friend of mine send me your fabulous blog and now I am hooked! I have made the very delicious Maple Oatmeal Princess coffee cke three times in three weeks because my family loves it so much. Just reading about the chicken wings and I wonder whether I could do it with chicken legs instead? we don't like the wings at home and I always use them to make chicken stock instead!I shall be looking forward to finding out and trying it out!

walkie74 January 30, 2014
Marie-Helene, I bet you could use legs. I have a different version of this recipe, and I multiply all the ingredients by four to make sure I have enough sauce and coating.

mksgurl1 January 29, 2014
this sounds absolutely delish. I like the idea of baking rather then frying this is a must try

cucina D. January 29, 2014
I love this idea! Big chicken wing fan, but never liked frying them so I have always baked them for my famiglia. I love the Korean spices and flavors, will be trying these soon for an upcoming weekend food event. Grazie!