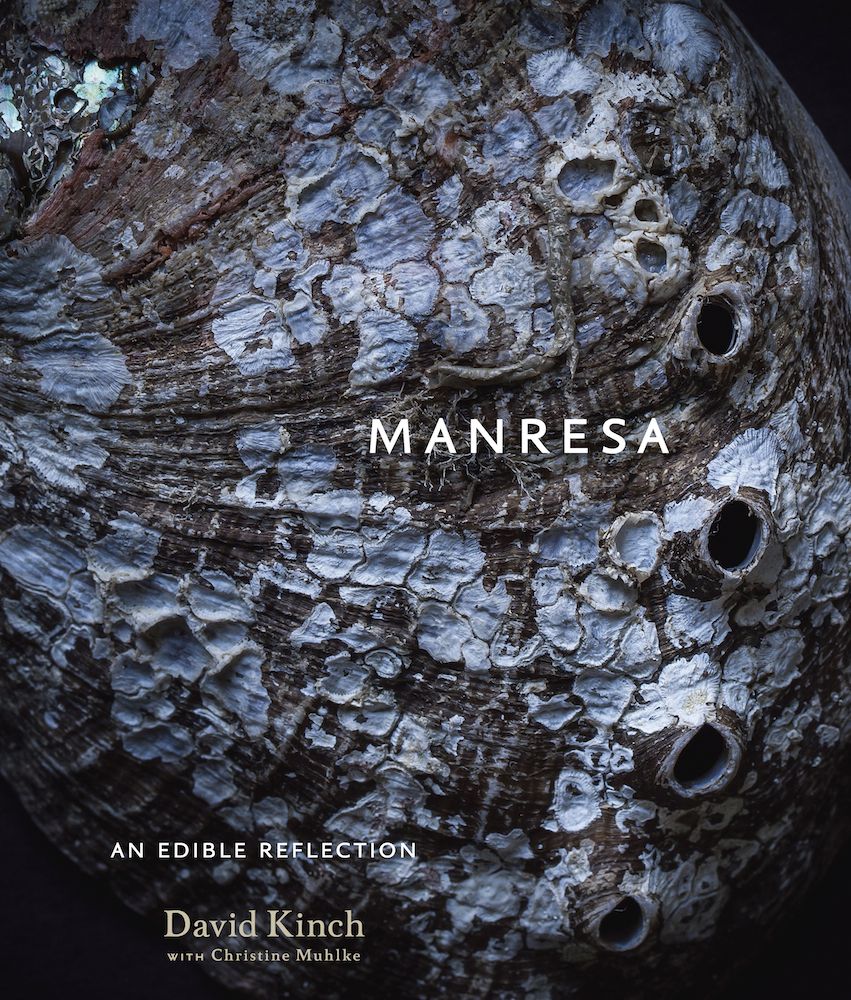 Manresa provides a beautiful glimpse into the thought process of David Kinch, the chef-proprietor of Manresa in Los Gatos, California. Like Thomas Keller of The French Laundry, Kinch redefined Californian -- and American -- cuisine. More than just a book of recipes, it also includes whole sections on how a menu is built, the use of creativity and technology in the kitchen, and the restaurant's bar. And it chronicles Kinch's development as a chef and restauranteur.
The book opens with a foreword by Eric Ripert in which he recalls his first meeting with Kinch. Ripert talks about Kinch's genuine humility and curiosity -- exactly what is evident throughout the rest of the book.
This is restaurant cooking at its highest: Kinch’s recipes are presented in their entirety, with multiple components, garnishes, and sauces. Kinch's signature recipe, “Into The Vegetable Garden,” presents as a simple tangle of vegetables from the garden -- one would think it hardly needed a recipe. On closer inspection, though, it is a complicated non-formula of hot and cold, cooked and raw, roots and flowers, even “dew” and “dirt.” By non-formula, I mean that Kinch recognizes that the integrity of this dish comes from what's on the farm that particular day, and therefore cannot be set in stone as a recipe. Rather, he makes suggestions as to what belongs to each "set." This speaks eloquently of Kinch’s farm-to-table philosophy.
With that said, two of my favorite recipes in the book involve the humble egg. I've made his omelet to fantastic results. It's the simplest recipe in the book by far, using only eggs, butter, salt, and an optional truffle. He recalls a late-night meal in his restaurant with the legendary French chef Alain Passard. Kinch writes: "He asked me to make an omelet for us, which I did, carefully and to the best of my abilities."
Passard corrected his technique, and taught him how to make that perfect, soft-curd omelet. You get to read the whole account, in detail, and it will make you a better cook; I’ve been making my omelets this way for about a month, and it’s glorious every time.
The other egg recipe in the book again involves Passard. This time, it’s Kinch’s take on the Arpège Farm Egg, one of Passard’s signature dishes. An egg is separated, the yolk lightly cooked in its own shell and topped with sherry-laced cream, chives, ginger, fleur de sel, and maple syrup. I made this during one winter’s night with a friend of mine, and it was worth the time. It taught me what chefs mean when they talk about "balance."
Manresa is not an easy cookbook to use. Most of the recipes in this book, I will freely admit, I won't be attempting at home any time soon. So while it's not a practical book by any stretch of the imagination (and I'm no stranger to complex recipes -- I've cooked from both Pok Pok and Ivan Ramen with great success), it does make the reader think more carefully about the food on his or her plate. And, certainly, dream about eating on the California coast.

foodetteunderpressure.tumblr.com
I like cooking, and enjoy the challenge of tackling complicated and wonderful recipies as well as simple ones. I like feeding people. But most of all, I like to eat :)

QueenSashy February 26, 2014
I do not easily invest into new cookbooks, but as soon as I opened up the cover and saw the photos and the dishes, I knew I had to have this one. The thing that got me hooked is that although most of the recipes are not super achievable for home cooks (as cookingvictoria pointed out), this book inspires you to think out of the box, try new things and take new directions. It's a pricey book, but I enjoyed and continue enjoying every page of it.

cookinginvictoria February 26, 2014
Wonderful review, KellyInToronto! Love the evocative description of both of those egg dishes. And even if many of the recipes here aren't really achievable for most home cooks, this cookbook sounds like a great read with much wisdom to impart. I look forward to checking it out! :)

Greenstuff February 26, 2014
Great review. The first book in all the Piglet that I'm thinking I must check out.

sexyLAMBCHOPx February 26, 2014
Very well written review. Probably not for me, but I would gladly peruse at the library.