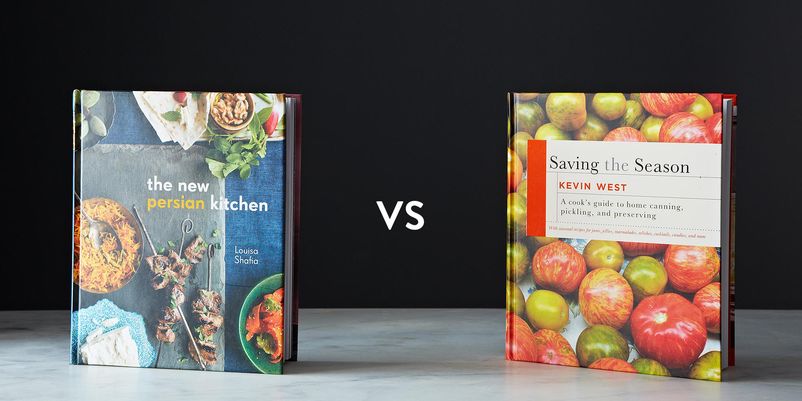 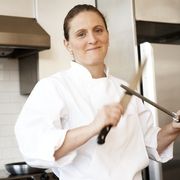 April Bloomfield has spent most of her life in the kitchen. A native of Birmingham, England, she honed her craft through cook positions in various kitchens throughout London and Northern Ireland, including Kensington Place and Bibendum. It was under the guidance of Ruth Rogers and Rose Gray at The River Café where she learned to appreciate the beauty and simplicity of food.

April’s first cookbook, A Girl and Her Pig, was published in April 2012.

When I cook at home, I cook from memory. When I cook from new cookbooks, though, I like to follow the recipe precisely; the exercise is about replicating the chef’s vision of the dish.

My two books arrived -- Saving the Season and The New Persian Kitchen -- and after reading through both cover to cover, I knew that judging would be challenging. They’re different leagues of cookbooks, for one, but on top of that, many of West’s recipes in Saving the Season involve fresh produce that isn’t readily available during the cold winter months in New York City.

But I kept going: I found a number of dishes from each book to cook myself, and then had a few people taste them with me in my test kitchen at the Piggy.

I chose to start off with Louisa Shafia’s book, which is a total joy to read. I found myself visually drawn to the book, and the Sweet and Smoky Beet Burgers in particular jumped out at me. I love myself a good burger, so that’s what I made first.

The ingredient list was fairly simple to shop for, and Shafia’s directions were clear and easy to follow. Everything came together simply and quickly, though while I was making the burgers, I worried both about the large amount of paprika it called for and the sweetness the raisins might bring to the final dish. But once the burgers were finished -- atop buns with yogurt and dill -- they were delicious! My taste testers and I were pleasantly surprised by how much beet flavor came through amidst the spice, and the sweetness from the raisins dissipated with the yogurt and the tart tomato and cucumber salad she recommends topping them with. I loved, too, that this recipe makes great use of leftovers -- you can make the patties with leftover rice that you probably already have in the fridge. I will definitely be making these on a hot summer day!

I also made the Date Shake, which was, true to its name, very simple once I prepped the ingredients. The recipe was nice; it was simple and well-balanced, and all of the flavors played well together. Next time I make it -- and I will make it again -- I might omit the sesame seeds, but other than that, this received high praise from those I shared it with.

Because of the harsh winter we've experienced in New York, I had a bit of a struggle picking out recipes that were in season from West’s book. I landed on a few I thought I could source: Lime marmalade and Asian Pears in Ginger-Lemongrass Water it would be.

I started with the former, and ran into a bit of trouble finding ingredients: I wasn’t able to get the Bearss limes the recipe called for on such short notice, so I had to use regular limes instead. That aside, this recipe took 3 days, which was a little drawn-out for me, and likely for the home cook. All of the limes needed peeling; step two -- and three -- require time to sit overnight. The recipe began to feel a little like a culinary school textbook: informative and helpful, but a bit tedious.

As I was cooking, though, and as the limes started combining with the sugar, my kitchen began to smell fantastic. And, admittedly, once the marmalade set up it tasted wonderful. The Asian Pears in Ginger-Lemongrass Water were equally good, but I needed a longer cooking time than the recipe specified. After the called-for 5 minutes, my pears still weren’t looking very translucent.

When I’m looking to cook from somewhere other than my own memory, I look for clearly written recipes. I look for easy-to-follow steps. But above all, as a professional chef, I’m drawn to adventurous cookbooks, especially those that are bright and colorful and that draw me in -- and away from what I normally make in the kitchen. Those are the types of books I can sit down with and read in just a day. The New Persian Kitchen is one such book -- and because of that, it takes the win. 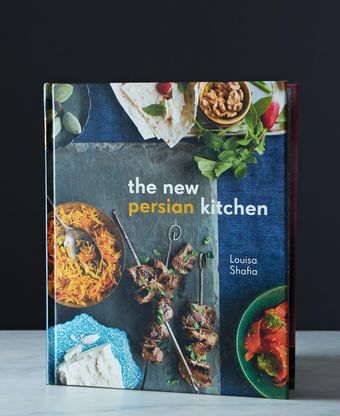 erinsk March 5, 2014
Having only looked through West's book, I'd agree that it feel's somewhat text-bookish. There's definitely a lot in there to learn, but it takes a good amount of time to work through it.

PieceOfLayerCake March 2, 2014
Aside from the focus on the intricacies of fresh produce that both books seem to value, The New Persian Kitchen just seems to possess more of a dynamic flavor profile than Saving the Season. Some may appreciate subtlety and nuance when selecting a dish, but more often than not (especially with vegetarian options), I find myself drawn to those preparations with a dynamic and complex zing to them. A good choice from a true modern food smith, Ms. Bloomfield.

M March 1, 2014
I just picked up a copy of The New Persian Kitchen at the library today.

Anna B. March 1, 2014
Fab review. I love the threads in it: which is a great read, ingredients not too hard to find, recipes easy to follow and work for the home cook.

mcs3000 March 1, 2014
April Bloomfield is simply the best. Looking forward to checking out both books.

eternalgradstudent March 1, 2014
These were both my favs going into the competition. I think I just might have to buy both, now.

Deborah R. March 1, 2014
That lime marmalade is brilliant and easy. Too bad. Such an awesome book.

AntoniaJames February 28, 2014
"The New Persian Kitchen" has so much going for it. I love how it has all the recipes, in order, in the table of contents. In addition -- and I was surprised this wasn't raised in any of the reviews -- Shafia includes twelve different menus, mostly for special occasions (there's one "easy weeknight dinner" menu) including, get this, a Passover dinner, a shabbat dinner, Thanksgiving and Christmas or Hannukah! And each one sounds gorgeous, and thoughtfully created. ;o)

Naomi M. February 28, 2014
Agree with you! Think I will go curl up with the New Persian kitchen!

Tamara B. February 28, 2014
My sister-in-law married a Persian and I would love, love, love to delve into the cuisine. So guess which book I would enjoy most??

BoulderFoodie February 28, 2014
Both are great cookbooks but I would agree that I am drawn more to the easy and exotic. Can't wait to create a great feast from The New Persian Kitchen!

Deb S. February 28, 2014
The New Persian cookbook already has me hooked with the aforementioned beet burger. Can't wait to try this with a date shake!

Megan February 28, 2014
As she states in her review, easy to read and high ability to obtain ingredients at low cost is key to a good recipe. I agree with her review; I think she definitely chose a book that takes into consideration seasonality and efficiency! :D

WinnieAb February 28, 2014
I have and love both books but I do agree with this decision. The New Persian Kitchen is a real treasure!

Jennparma February 28, 2014
Although I agree that there would have been many more choices of recipes to make from Saving the Season had it been reviewed in Summer...I don't think that has anything to do with the issues that April oulined in her review. The fact that the recipes require a significant time commitment and that the time called for in one was off, could apply no matter what ingredients were being used. I thought this was an excellent review by the very deserving winner of last year's contest.

Lily W. February 28, 2014
Great review! Although a preserving book would have been better to judge in summer time, to be fair. Congrats to the winner!