Fresh Figs and 9 of Our Favorite Ways to Use Them

Today: Think you know all there is to know about figs? Fig-geddaboudit. 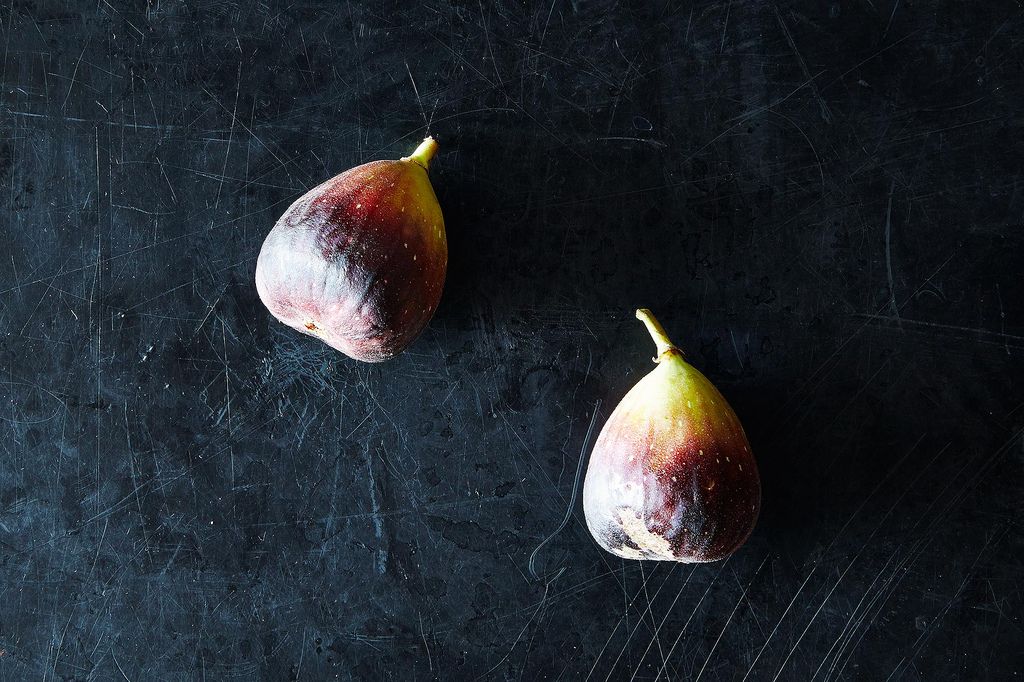 Figs aren’t actually fruit. Of course, nothing will surprise you at this point: Avocados are berries, almonds aren’t nuts, and tomatoes -- well, they’re confused. Botanically speaking tomatoes are fruits, but legally, they’re vegetables (as declared by unanimous decision by the Supreme Court back in 1893).

In the “things that are not what they seem” competition, figs might win, thanks to their fascinating botanical structure. What we think of as the “fruit” is actually called a “synconium.” Each fig is comprised of a hollow shell that surrounds pith and pulp (1, below), which is made up of a bunch of little drupelets, each one formed from a tiny little flower. Because the flowers are so small and tucked away inside of the fig, at one time fig plants were thought to bear fruit without ever flowering. 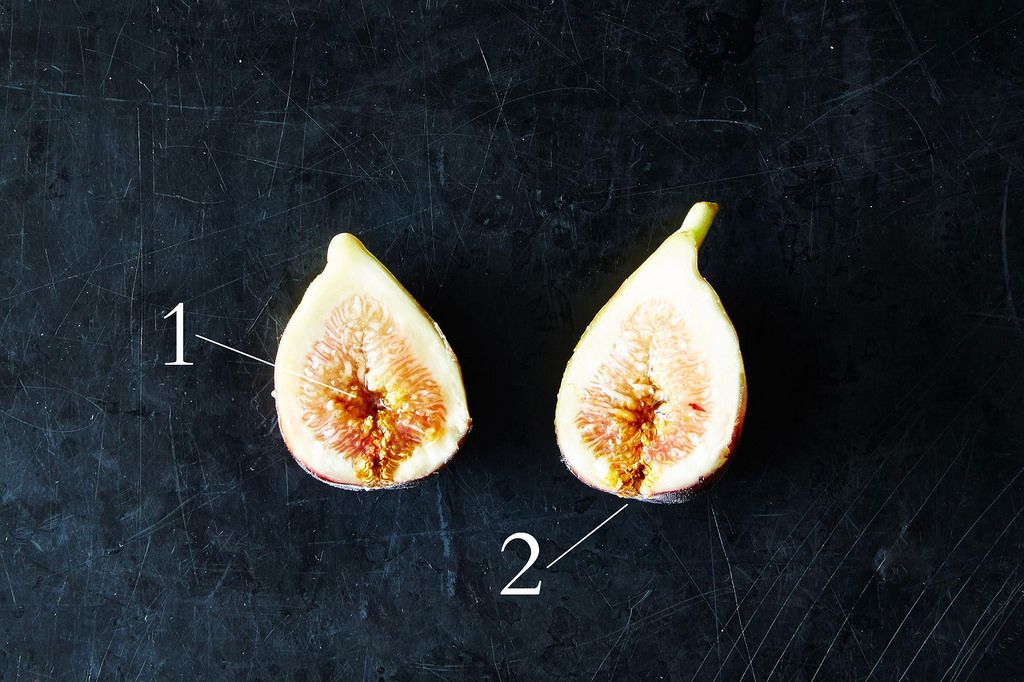 Figs produce fruit in two seasons: In the U.S., there’s one crop in the summer and another in the fall (although some California farmers are trying to extend fig production to year-round). Figs grow well in warm climates, and most of the figs grown in the U.S. come from California, although they're grown in other places too -- some much cooler than you’d expect.

Figs come in a wide range of colors, and there are over 700 different varieties, all of which can be classified as one of four distinct types based on pollination characteristics. The first are common figs, which are able to produce a crop without pollination. The second type, caprifigs, aren't edible, but they’re the source of pollen needed for Smyrna and San Pedro figs, the third and fourth types. (San Pedro figs actually produce their first crop without pollination, but they do require pollination for the second.)

You’re wondering what in the world transports pollen from caprifigs to the tiny hidden flowers of Smyrna and San Pedro figs, and the answer is extremely tiny wasps. They gain access through a small hole -- the ostiole or eye (2, above) -- at the bottom of the fig. 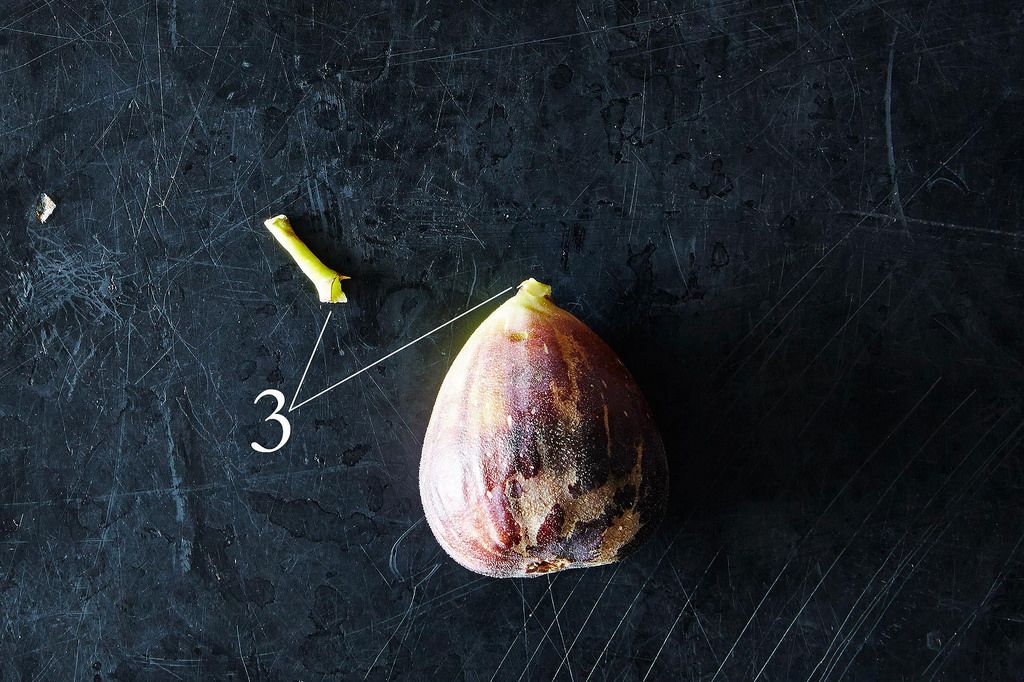 Fresh figs are delicate: They bruise easily and have a short shelf life. Keep them in the refrigerator and use them quickly. To prep fresh figs, simply wash them and twist off their stems (3). Most of the time figs don’t need to be peeled; if a recipe calls for it, you can flout authority and leave them on. If peeling is absolutely necessary, let D.H. Lawrence be your guide.

When you first get your hands on fresh figs, it's hard to resist stuffing one or two straight into your mouth. Don't fight the urge. Jane Grigson suggests you “leave them in the sun for a while before serving them; warm figs are the best of all.” Once you’ve had an initial taste, try one of our 9 favorite ways to use fresh figs. 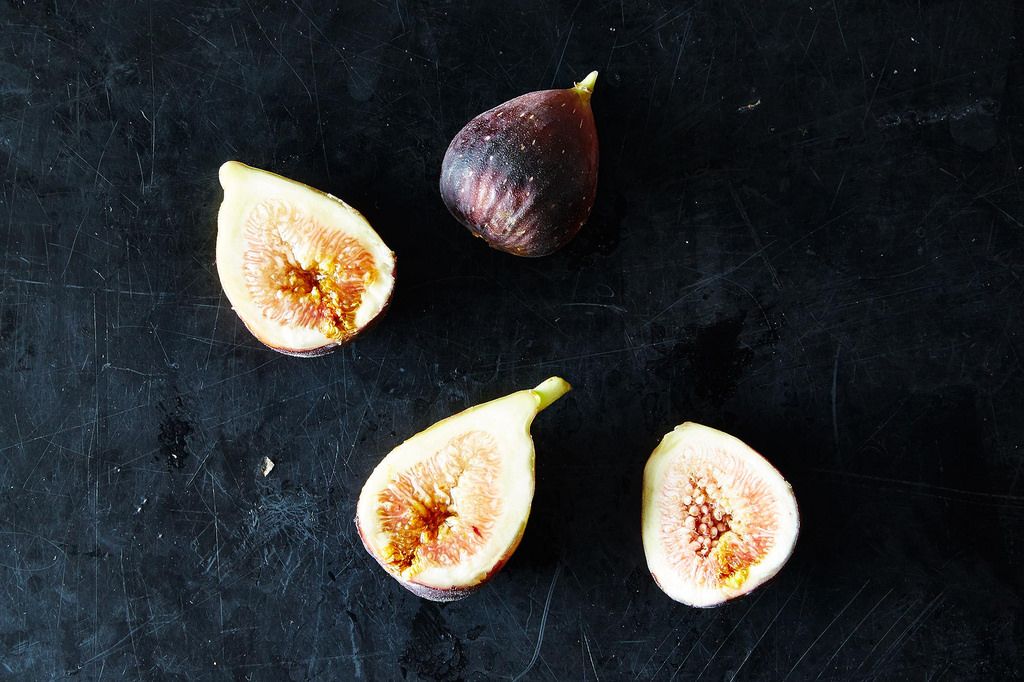 What are your favorite ways to use fresh figs? Tell us in the comments!

Judy F. July 6, 2020
Thanks for reminding me about prosciutto and figs open face sandwich topped with arugula. I’m old and I forget. But my mouth still works.

DMStenlake July 6, 2020
Our fig tree is just beginning to ripen its fruit. July 5 we picked 2 huge figs and here’s your article. Perfect timing. We like figs warmed with melted Gruyere cheese or in our Caesar salad with homemade dressing. The sweet savory and salty is so delicious! Thanks for this timely article.

Curly August 24, 2014
My favorite is frozen figs, frozen watermelon and frozen banana with fresh mint. Add to almond milk protein smoothie. Talk about good! I love the crunchy figs seeds you get from the freezing.

Scribbles July 24, 2014
I love figs and this is a great article - I, too, think the DH Lawrence poem is fantastic - and all the more reasons to love figs! My Mother-in-Law had 2 enormous fig trees and it seemed I was the only one who likes figs - standing in the sun eating those ripe figs was heaven. She has passed and figs are hard to come by in NC. I'm not certain why that is since it's certainly hot enough. If anyone knows a good source near Asheville please let me know...thanks!

BonPierce July 24, 2014
I halve them and brush with olive oil. Place on a med hot grill cut side down. At the same time I brush some haloumi cheese slices and put them on the grill also. Grill for about 5 minutes. Split a baguette and toast that until lightly toasted. Remove everything and sprinkle the figs lightly with sea salt. Bread, dab of cheese and fig = divine! Sprouts sells a "grilling cheese", It's haloumi but half price. Enjoy.

Marcella H. July 23, 2014
If you have a fully ripened fig - oozing honey from its crack - there is no reason to subject it to the laborious transformations described herein. You must indeed peel it. Why would you let its skin come between its luscious flesh and your lips? When you've peeled it, you need do nothing more than eat it. If you believe that pleasure alone is not sufficient reason to eat something, pair peeled, ripe figs with prosciutto that has not been trimmed of its sweet fat.

Laurence T. July 23, 2014
Bacon wrapped and roasted on a bed of spring greens with shaved Manchego cheese. Thanks to the Kalapawai Deli in Kailua, HI (Oahu)

[email protected] July 23, 2014
I have two fig trees on my property and although they sit side by side, one ripens almost a month earlier than the second tree. I have been told they are called: Turkey Browns or Brown Turkey? I live in southern Georgia and have noticed that almost everyone has at least one fig tree in their yard. Thankfully, I have a friend who showed me how to make fig preserves. Seems I'll be harvesting figs through August.

Stacy S. July 23, 2014
I love a dish I got from Francis Mallmann's cookbook:
Tear fresh figs in half, add torn mozzarella pieces and a scattering of fresh thyme. Drizzle with olive oil and salt and pepper to taste. Delish!

London_Eats July 21, 2014
I've got a fig tree in the garden - they get quite big and start to ripen, but never get there - too cold here in the UK! Anyone got a recipe for using unripe figs?

aargersi July 21, 2014
YUM! My mother in law's tree is covered right now - made a big batch of fig and ginger jam, and one of honeyed figs, and now after reading these I want to make rosemary fig preserves. I have been thinking about a pecan and mascarpone tart with bruleed figs as well - mostly because that means using a blowtorch ... FUN!!

ChefJune July 21, 2014
Abbie, try caramelizing some red onions, and when they are really sweet and smooshy, add a bunch of quartered figs and let them cook down. It is an amazing condiment for pork or meaty fish.

SandraGE July 21, 2014
In My country we preserve, whole cooked in about half of cup of sugar, some cinnamon sticks and water that cover them, them we eat with arequipe that is similar to dulce de leche!

Jen July 20, 2014
Fig preserves! Just halved and cooked a little with sugar, lemon zest, and lemon juice. Them I carefully enjoy them all winter on yogurt and on biscuits!

Pamela H. July 20, 2014
I am crazy about figs and use them in a variety of ways. I have sliced them and added to ham paninis. I recently roasted them with beets, tossed with greens and feta and served as a side salad. I'll be experimenting with the suggestions above!

Pegeen July 20, 2014
ChefJune, your caramelized fig tart with raspberries sounds heavenly. Will be making that soon.
I like to use fig paste on pizzas:
- Sprinkle balsamic vinegar and olive oil on quartered, fresh figs
- Slow roast figs on baking sheet in oven until they’re well-cooked and caramelizing
- Puree in blender or food processor
- Spread on pizza, top with goat cheese and prosciutto or diced ham
- Bake or grill until crust is cooked

And whoever thought of the D.H. Lawrence poem mentioned in the Column deserves a prize!