Today: With a little help from an English muffin, bánh mì can join your breakfast table -- no pork belly required. 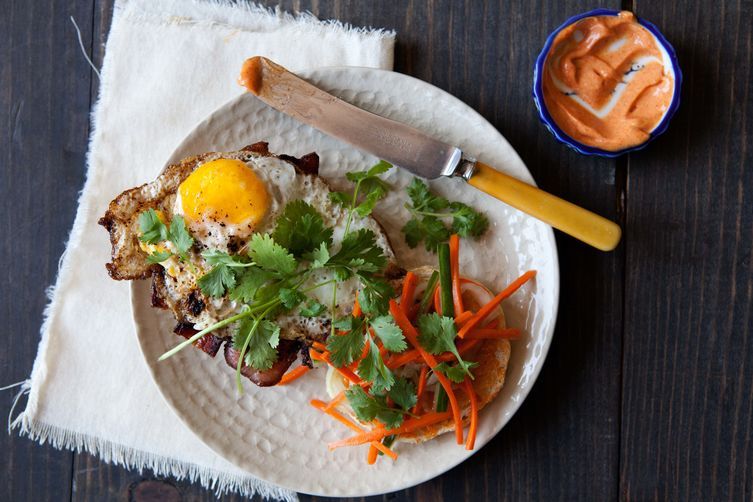 I buy pork belly compulsively whenever I see it. This would be a problem, except that it doesn’t show up in our market very often. And, whether de rigueur, passé, or somewhere in between, pork belly is delicious and surprisingly versatile. (Just ask Tamar Adler or Antonia James!)

Even though there are a number of ways to cook with pork belly, I nearly always use it for the same thing: pork belly bánh mì. The bánh mì, that brilliant Vietnamese flavor-bomb of a sandwich, has become an icon. It’s a sandwich rock star -- colorful, a little over-the-top (but still classy), with a broad base of adoring fans, myself included. The last time I was making a pork belly bánh mì, I thought to myself the same thing I do every time I prepare pork belly: “This is what bacon is made from. I wonder if I could just use bacon?” This time, that thought was followed by an even better thought: “What if I use bacon and turn my bánh mì into a breakfast sandwich?!”

It turns out that this is not an original thought, and that adding an egg to a bánh mì is far from uncommon (on the contrary: Egg is one of the more traditional fillings). But then, I went the extra mile and introduced an English muffin to the situation. This extra mile is almost certainly a blasphemous one, given that the name bánh mì actually refers directly to the baguette-like bread the sandwiches are made with. Switching in an English muffin is like taking an awkward tweedy Englishman (think Hugh Grant in Notting Hill) and dropping him unceremoniously onto a back street somewhere in Vietnam. 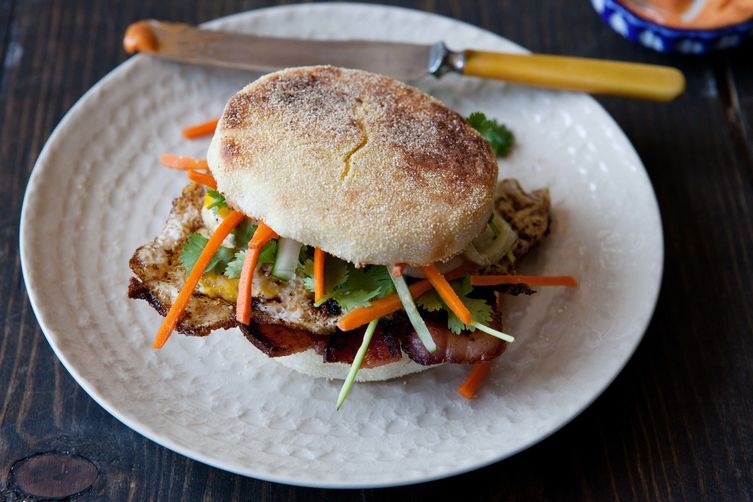 Despite what you might expect, the Englishman actually fares well, quickly making friends with the locals and picking up bits of the language. The English muffin added its amiable malty breadiness to the pickles and spice with remarkable ease. It all just worked, and it made a wonderful breakfast. This has me thinking that perhaps an English muffin can work its breakfast-y magic on any sandwich! I’m coming for you, breakfast cubano...

Valerie T. August 24, 2014
excited i made this dinner/lunch sandwich tonight..... looking forward to repurposing it for din

Susan W. August 21, 2014
Recently picked up a raw pork belly from my favorite farmer. All of his animals are pastured. Curing it in spices now. Soon it will be bacon and I can't wait to make this. I will use two Portobello mushrooms in lieu of the muffins. Can't wait!!

HalfPint August 21, 2014
The Vietnamese sandwich shops sell this bánh mì with the fried egg, without the bacon which I find unfortunate since bacon is always great with fried eggs. It's called bánh mì ốp la (any time you see "ốp la", there's a fried egg involved). And it's not just a breakfast sandwich. We eat day and night. Great looking recipe!