What to Do with an Overload of Eggplant

It's the season of overflowing market bags, heavy CSA boxes, and gardens run amok. Alexandra Stafford of Alexandra Cooks is showing us how to store, prep, and make the most of the bounty, without wasting a scrap.

Today: Learn the best ways to store, prep, and cook this late-summer vegetable, then dig into a classic Eggplant Parmesan from The America's Test Kitchen Family Cookbook. 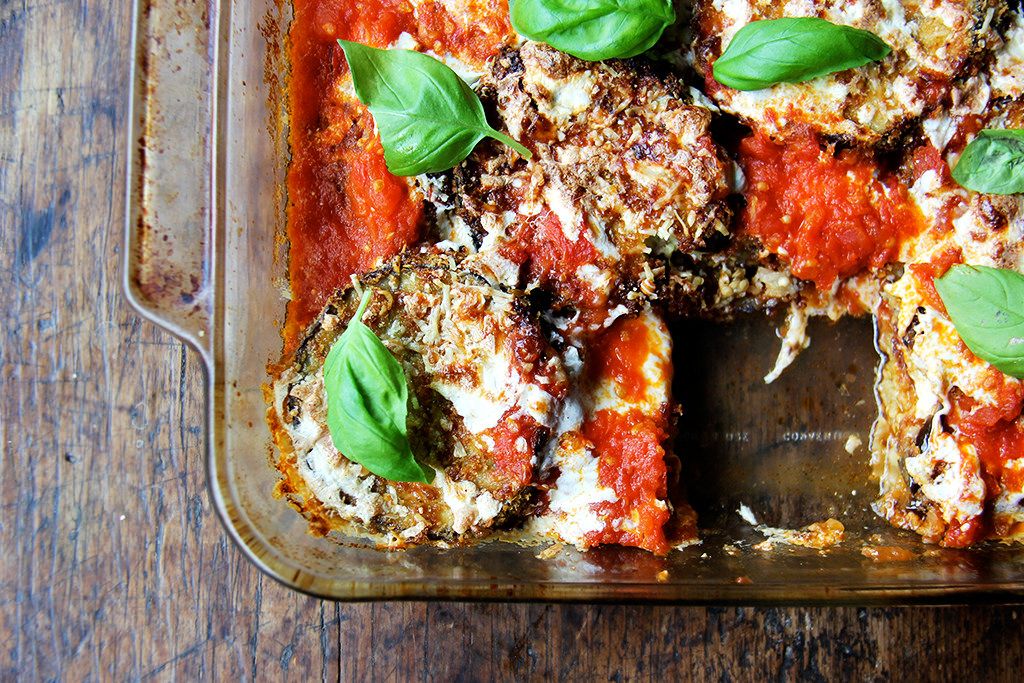 Is there a vegetable more polarizing than eggplant? More capable of inciting disputes over its preparation? More likely to cause adults and children alike to scrunch their faces in disgust? 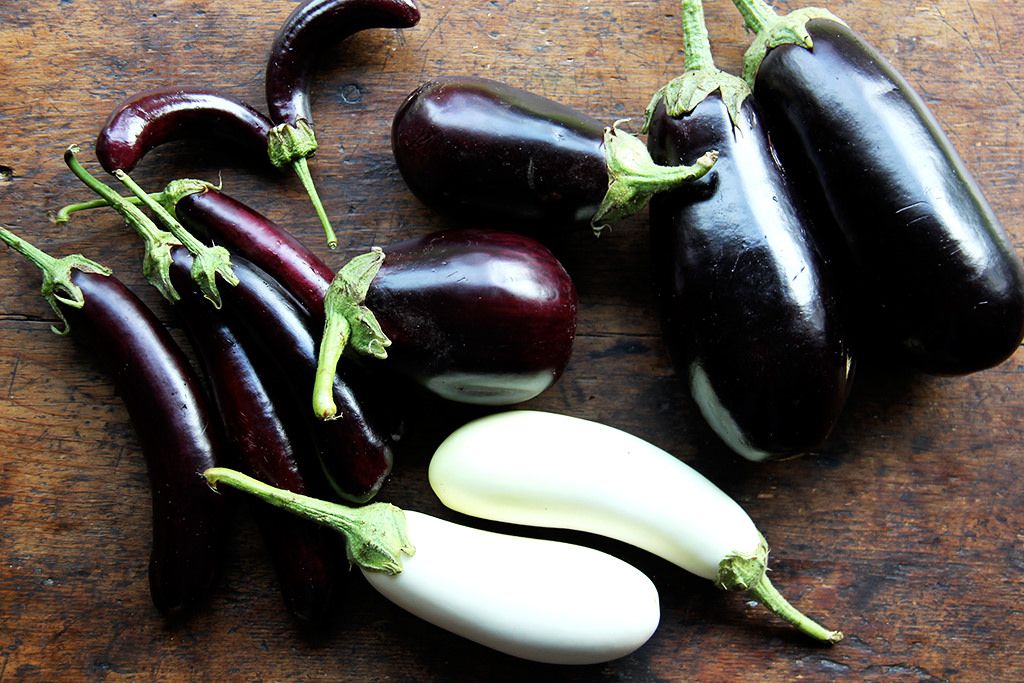 Because eggplant can be anything from bitter and greasy to meaty and rich, people seem to either hate or love this late-summer vegetable (actually a fruit, a member of the controversial nightshade family). And while I have no doubt that some people genuinely dislike eggplant, I fear that others may have written it off years ago when they were, say, eight, or maybe after a bad experience with oil-laden eggplant parm, and they haven't given it a chance since. And this is a shame, because how eggplant tastes is directly related to how it is prepared, and when it is treated properly, it tastes sweet and mild and not a bit bitter or oily.

Certain preparations, in fact, need little or no oil at all. When roasted or charred, for instance, an eggplant's skin will blacken, leaving its flesh creamy and scoopable, a near-purée ready to be mixed with minced garlic, a splash of vinegar, and lots of chopped herbs. When sliced into rounds or halved and grilled, the meat softens and assumes a smokiness, a perfect base for a smear of tangy miso sauce or a drizzle of salsa verde. And when thinly sliced and layered into a gratin with tomatoes and onions, it melts into silky, fork-tender rounds.

More: Learn how to make your own salsa verde here. 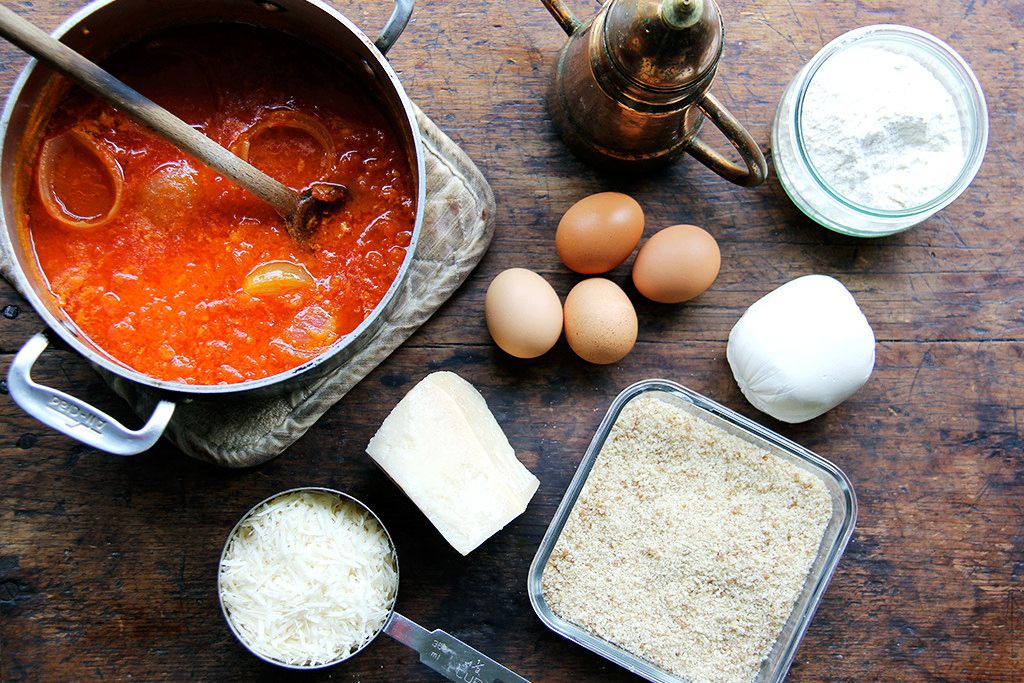 It's when oil is introduced to the preparations that the trouble begins. Eggplant is a sponge and, given the opportunity, will soak up any oil in reach, which is why sautéing and deep-frying can leave it tasting heavy and greasy. Salting leaches out moisture and condenses the flesh, reducing its tendency to absorb and helping it stay crisp and light. This, I learned from The America's Test Kitchen Family Cookbook, is an important step toward making a good eggplant Parmesan. But the real key to achieving eggplant Parmesan success is skipping the stovetop, frying-in-batches method altogether. America's Test Kitchen's method calls for baking the breaded eggplant on two preheated baking sheets, a step that not only saves time but also produces eggplant with superior taste and texture, emerging from the oven evenly golden without a hint of greasiness.

More: Use your oven to master another traditionally fried food: French fries.

These light, crisp rounds are irresistible, which will tempt you to stop right there, pile them onto a platter, sprinkle them with basil, pass some sauce on the side, and call your efforts done. But pushing on with this labor of love has a reward, too: a bubbling, comforting casserole layered with late-summer flavors that just might unite eggplant haters and evangelists alike around your table. 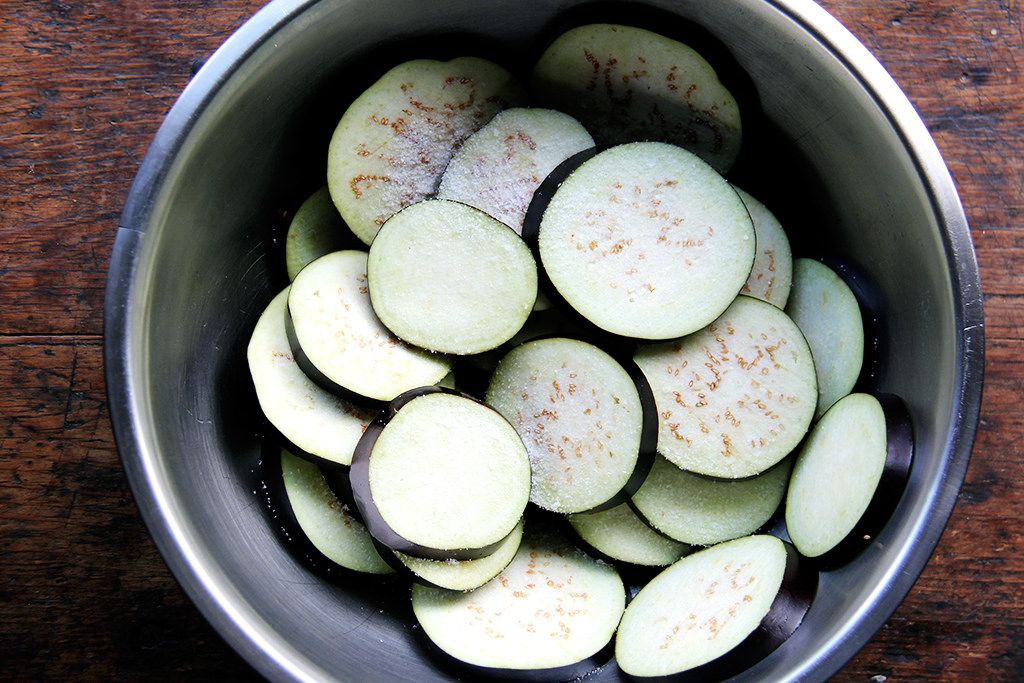 To store your eggplant: 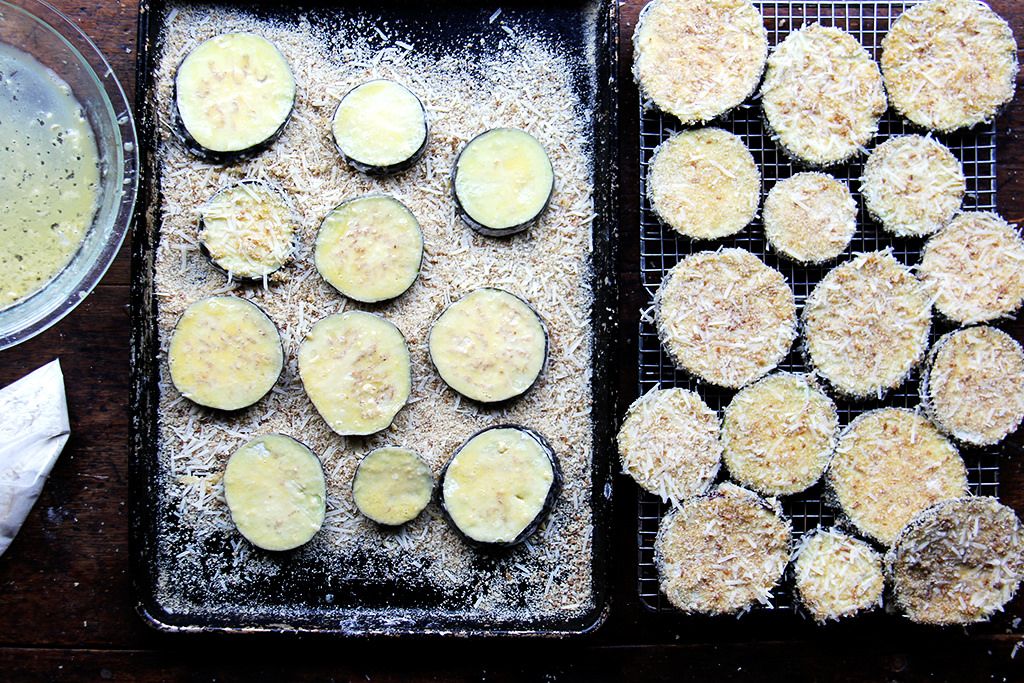 To prep your eggplant: 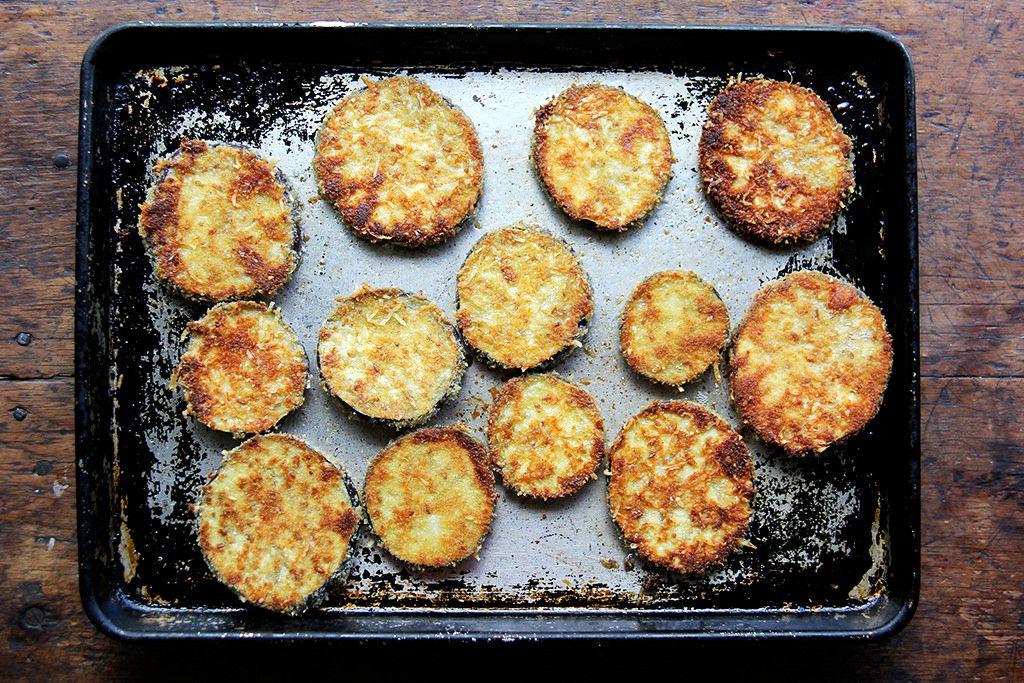 To cook your eggplant: 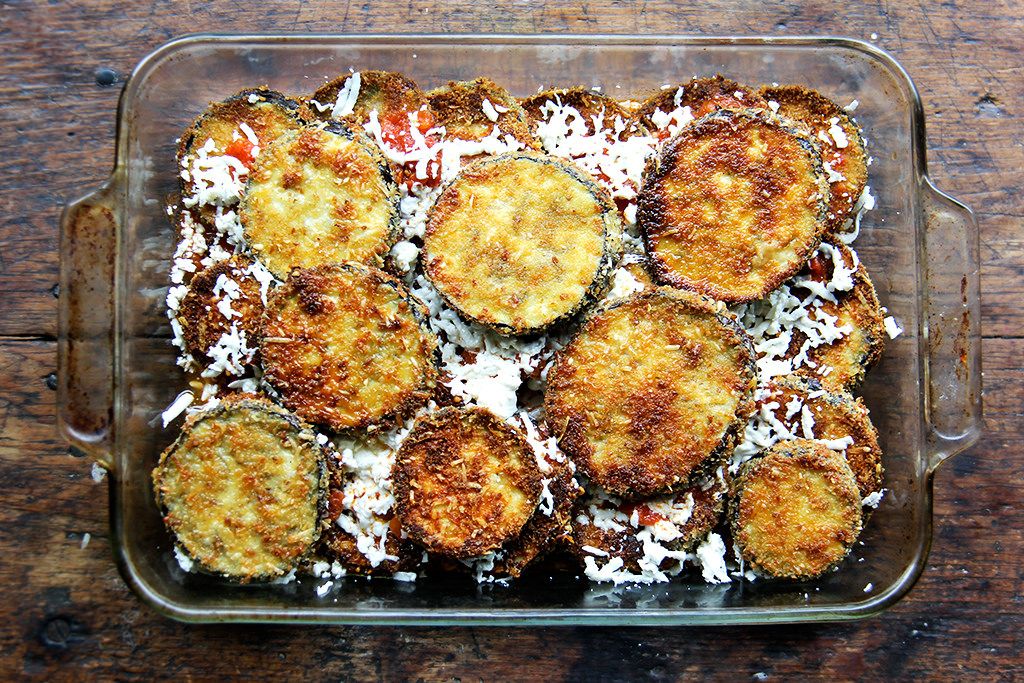 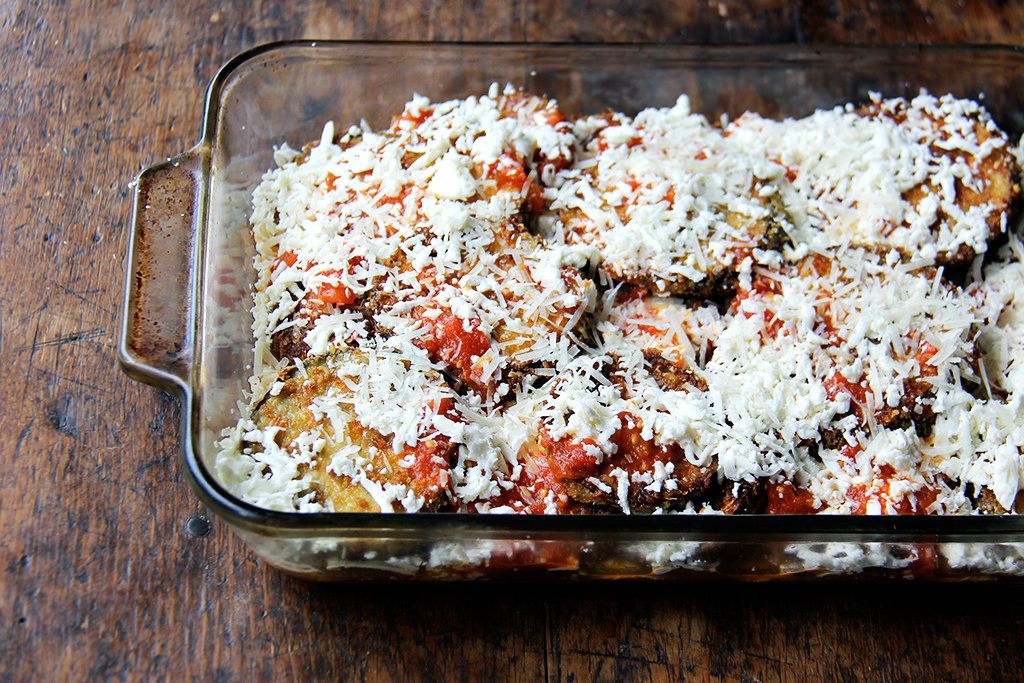 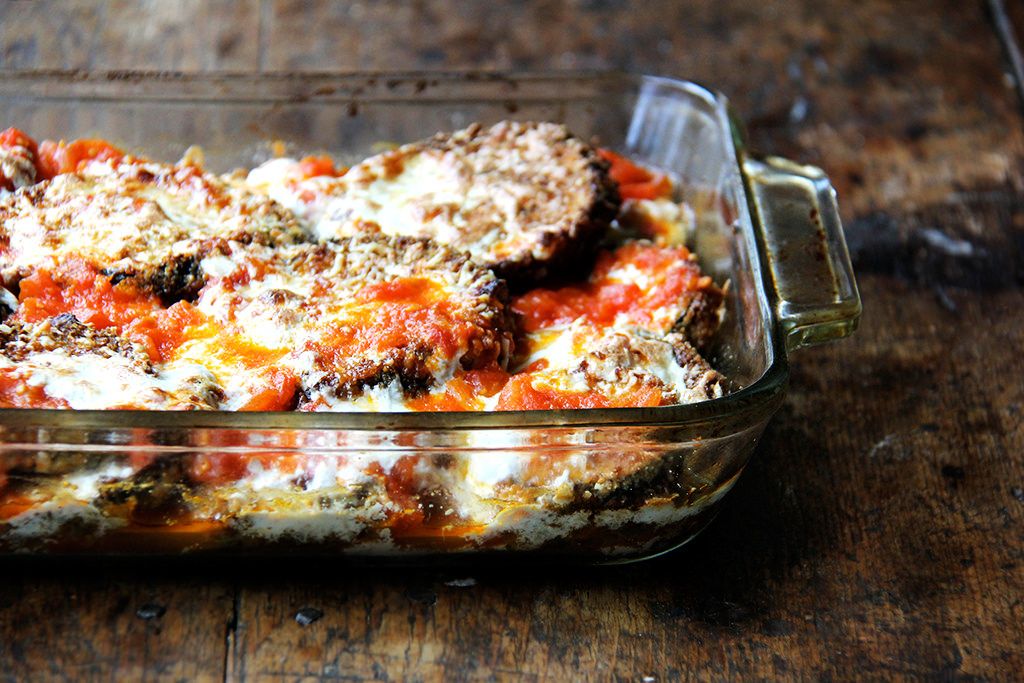 Tell us: What's your favorite way to cook eggplant? 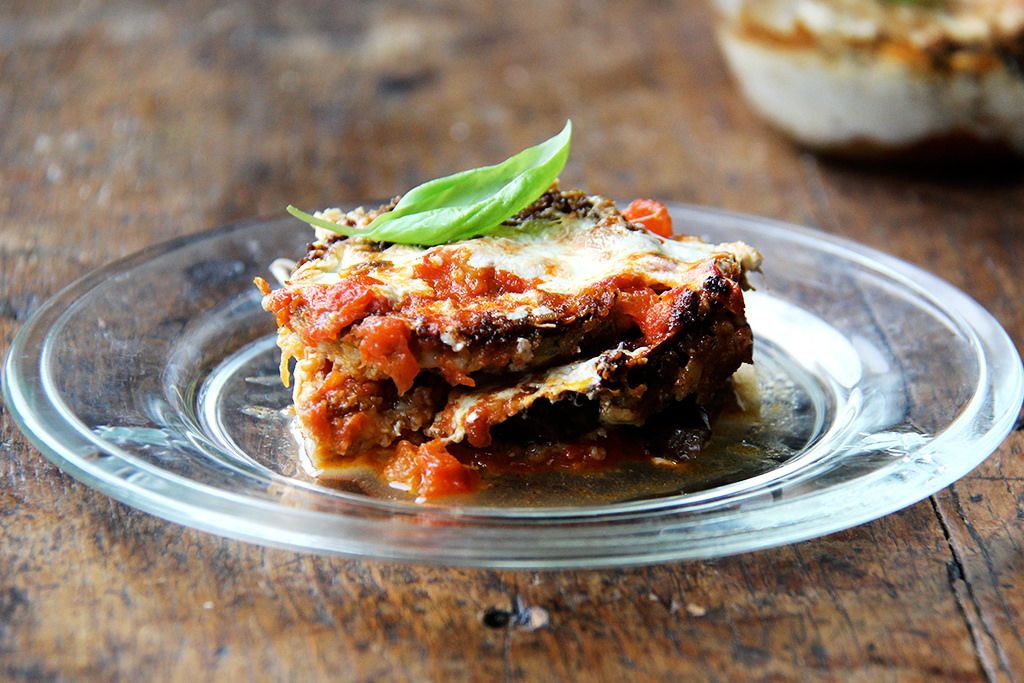 Susan September 29, 2014
FYI: I don't know if this holds true for anyone else, but I'm finding that the Japanese eggplant I grew this summer (and which keeps on producing!) keeps better in the fridge if I put them in a very loosely closed plastic bag. By loosely closed, I mean a single twist then fold under - nothing complicated, nothing tight.

Alexandra S. October 1, 2014
Good to know! I did find that the Japanese eggplant I left out tired more quickly than the others — the skin started softening a bit. I'll try the fridge next summer.

Susan September 22, 2014
Reading Alexandra's articles and all the comments has give me lots of ideas for dinner ... Perhaps a spin in eggplant and tomato gratin using the dollop of fresh pesto sitting in my fridge ... Mmmmmm.

Alexandra, on another note: do you have plans for a piece on butternut (or any winter) squash? I could use your help. A volunteer butternut took over my compost heap this summer and I now have a couple dozen plus curing in my barn aisle.

Alexandra S. September 23, 2014
Yes! That sounds amazing. Chez Panisse vegetables has a wonderful eggplant, tomato and onion gratin that would only be made more irresistible with a dollop of pesto. Yum.

And yes, of course! Butternut squash will definitely be an upcoming subject here. I am jealous of your supply! It is already so cold here in upstate New York, and I have been craving soup. I have had my eye on two soups in particular here: https://food52.com/recipes/24205-butternut-squash-soup-with-miso-and-coconut
and https://food52.com/recipes/14799-creamy-butternut-squash-soup-with-sherry

Each will make a small dent in your supply, but maybe you could make a couple of double batches?

Susan September 26, 2014
What luscious soup recipes, and I'm a huge fan of making big batches. I look forward to more!

Taking a tip for a sister (or maybe my daughter?), I've fallen into the habit of freezing leftover soups and stews in single servings in ziplock freezer bags. They're a godsend on those nights I stagger in from work too beat or busy to cook dinner from scratch. Plus the freezer bags stack like shingles, which is kind of cool. :)

Janne B. September 20, 2014
If you are grain-free what do you suggest as subs for flour and bread crumbs?

Alexandra S. September 21, 2014
This is definitely not my expertise, so if anyone else in this thread has any ideas, please jump in, but I'm wondering if you could use coconut flour in place of wheat flour? I've never used this, so I hope the flavor isn't too strong bc it really isn't a natural pairing here, but that could work. And for the breadcrumbs, maybe some sort of toasted and ground nut? Almonds or walnuts? I wish I knew more!

mrslarkin September 20, 2014
I do a similar eggplant parm, but I don't flour the rounds. I salt and drain the thick-ish rounds, then bake on parchment-lined sheet pans until nice and soft. Then, build it, lasagne-style, with grated mozz, some parm, and Marcella's sauce. Bake till bubbly. Makes great leftovers.

Alexandra S. September 21, 2014
Yum, so do you skip the breading altogether? Love the sound of this.

Nicolina September 19, 2014
Yes, true eggplant is like a sponge and will absorb tons of oil if you fry it, that is why I do not fry my eggplant any more. Instead after I have sliced and salted and let it drain for a few hours, I rinse it out and pat it dry with paper towel. Then line a cookie sheet with parchment paper. Place slices of eggplant and brush them with olive oil. Broil till golden brown, then flip slices over and repeat the process. This makes a great preparation for proceeding with your recipe of eggplant parmegiana. As for Angela's tomato sauce, no recipe needed. If you have a ton of tomatoes, quarter them, boil them for about 1/2 hour with a little basil and cook till slightly condensed most of the water has evaporated. Then pass them thru one of those European strainer and you have basic tomato sauce.

Alexandra S. September 19, 2014
Of all the egglant cooking methods I tried these past few weeks, I did not get to broiling, and I'm glad you brought this up, because it is a great technique. Deborah Madison gives guidance for broiling in her Vegetarian for Every Day cookbook, which I have been loving this summer, and she suggests a ton of sauces to serve with the broiled eggplant rounds — seems like a really handy technique. Thanks for bringing this up! Also, do you not bread your eggplant for eggplant parmesan? Would love to try that.

Angela September 19, 2014
Any recs for homemade tomato sauce recipes? Am particularly interested in the one pictured (of course), for this weekend when we load up with cheap tomatoes in bulk at the market.

Alexandra S. September 19, 2014
Hey Angela, Nicolina gave a great idea for a simple sauce above, but if you are looking for more specific instructions, the Marcella Hazan tomato sauce is completely delicious, also really simple: https://food52.com/recipes/13722-marcella-hazan-s-tomato-sauce-with-onion-and-butter That's what I made here. Once you make the sauce once or twice, you'll never have to look at the recipe again. It's kind of life changing.

Two T. September 19, 2014
This looks great! I love the oven fry method. Roasting is hands down a game changer with the eggplant. Last night I made a simple martha rose shulman/ny times miso glazed eggplant that used so little oil and that is great for those without a grill. Just roast a long Japanese eggplant halved, cut side down, smear with the miso sauce and broil a minute or two. Must try your parm.

Alexandra S. September 19, 2014
Awesome! I have a few Japanese-like eggplant on hand that I need to eat immediately. I bought them at the farmers' market and apparently they are called finger eggplants. They are long and slender, and I think will do the job. I have just discovered the wonderful world of miso sauce, but I really like the sound of this roasting-then-broil method. I was being lazy and used a stove-top grill pan, which didn't work so well, though the sauce was delicious. Going to check out MRS's recipe now. Thanks!

Sophie V. September 19, 2014
Hi Alexandra. About storage: when I don't get to use eggplant in say, two to three days I usually will grill it. That way, half-prepared, it stores much better in the fridge.

Alexandra S. September 19, 2014
So smart! I have been learning so much about storing vegetables these past few months. So many vegetables that I thought were fine to store in the fridge — peppers, eggplant, basil for example — I've realized shouldn't be. But cooking does seem to do something to increase the storage longevity. Thanks for the great tip!

hardlikearmour September 19, 2014
Diana Henry's Salt Sugar Smoke has a recipe for Grilled Eggplants in Olive Oil that is simple and delicious. Slice, salt, rinse, dry, then grill the eggplants. Heat olive oil and thyme in a saucepan, then add the eggplants and a little white wine vinegar. Bring to a boil, then immediately remove from heat. Once cool pack the eggplant slices into a jar and cover with the strained olive oil.

Alexandra S. September 19, 2014
Yum! So interesting. So, is this something you eat more at room temperature? As an hors d'oeuvre or in a salad or sandwich? I have so many eggplant to still play around with :)

hardlikearmour September 19, 2014
Yep. Room temperature as part of an antipasti spread. I've eaten it with bread and lemony-herb feta as a sort-of sandwich.

Alexandra S. September 20, 2014
Oh that sounds so good. Love the idea of paring it with feta.