How to Make Fideos without a Recipe

Today: Christine Rudalevige of the Family Fish Project brings us a simple, Spanish weeknight seafood dinner to satisfy the hungriest. 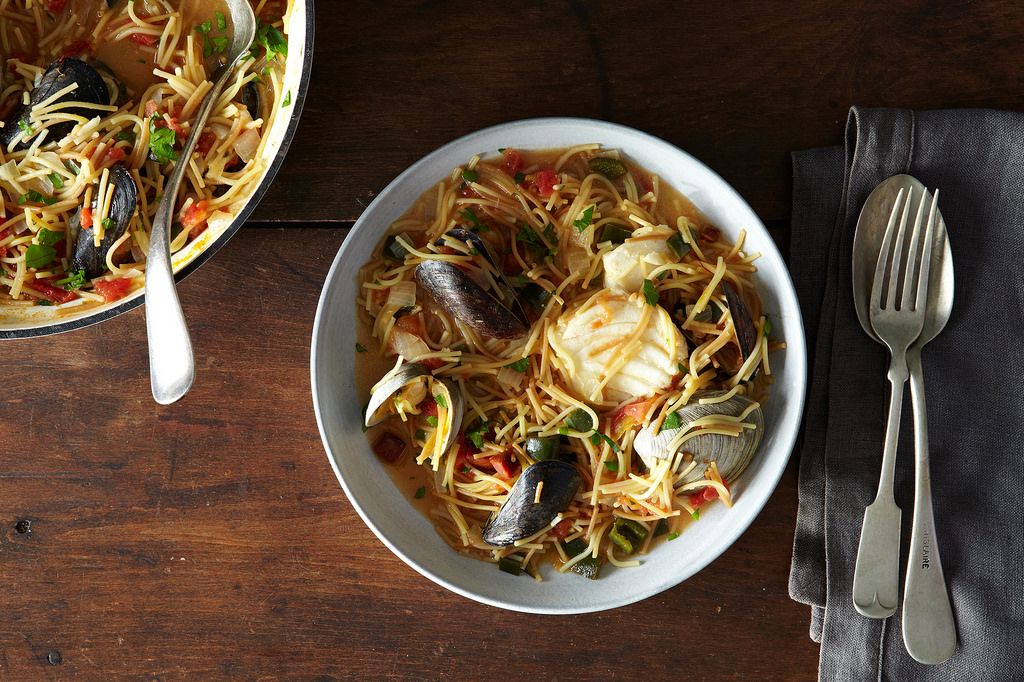 I’m a busy working mother living on the coast of Maine. Of course I’m interested in any recipe for quick, one-pot seafood meals with enough starch in the mix to fill my 16-year-old son’s very long, very hollow leg. That’s how I got onto Spanish seafood fideos.

Strictly translated, the word fideo means noodle. Fideos purchased in Latin markets have circumferences between 1/16 inches (like capellini) to 1/8 inches (like spaghetti). They either come in nests of 8-inch noodles or in 1-inch pieces. In Mexico, these noodles are often used in soups. But when they are part of heartier Spanish fideos (pronounced fee-day-ohs), the finished dish is more akin to its famous cousin, the paella, with the noodles taking the rice’s place. 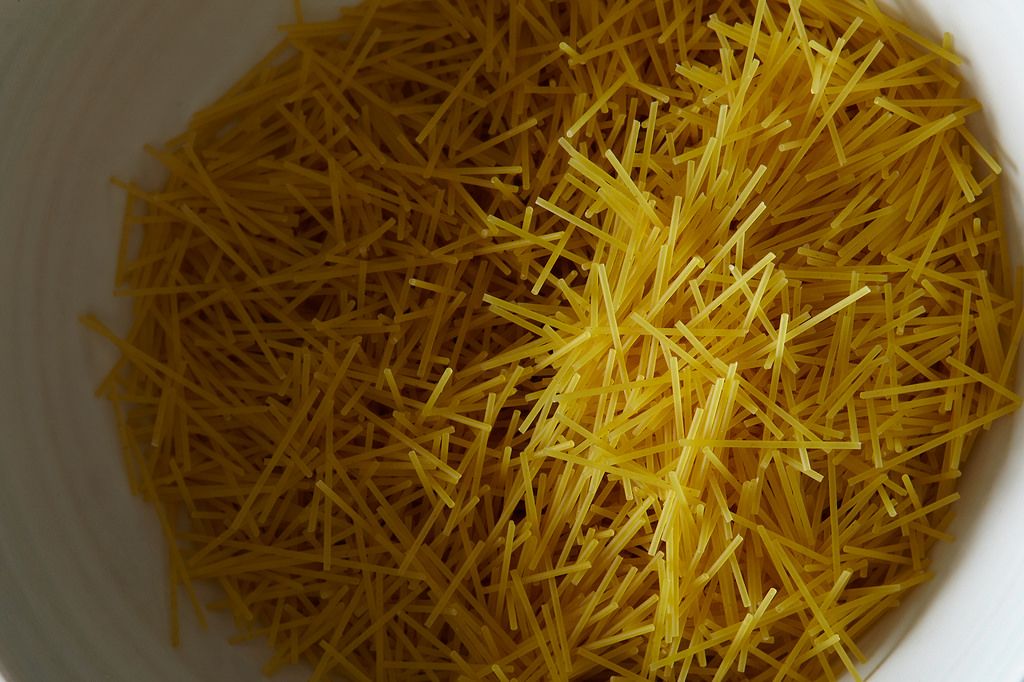 These cousins use many of the same aromatics, spices, sausages, broths, and seafoods. Fideos can be cooked in a paella pan, but that’s certainly not an authenticity deal-breaker. It’s the noodles themselves, how they are cooked to develop flavor, and how they nestle themselves into the curls and cracks of the seafood that elevates fideos to my preferred Spanish-inspired casserole.

Here's how to make fideos, without a recipe, according to your taste.

1. Catch the best-looking fish. Most everything in fideos can be swapped out for something else, but seafood really should be in this fish-centric dish. I typically run with littleneck clams, mussels, and the cheapest local white fish (cod, haddock, pollock) in the seafood case, cut into 4-ounce pieces. If I can’t get to the fish shop, I’ll use frozen shrimp. When company comes, I will add squid and lobster. It’s best to stay away from meaty or oily fish like swordfish or salmon as they have stronger flavors that might compete harshly with the sauce.

Buy enough fish to satisfy the people you're serving. Heavy eaters might need a dozen clams or mussels and 4 ounces of fish, or 5 to 6 large shrimp. Work backwards from there according to your diners’ appetites and your budget. 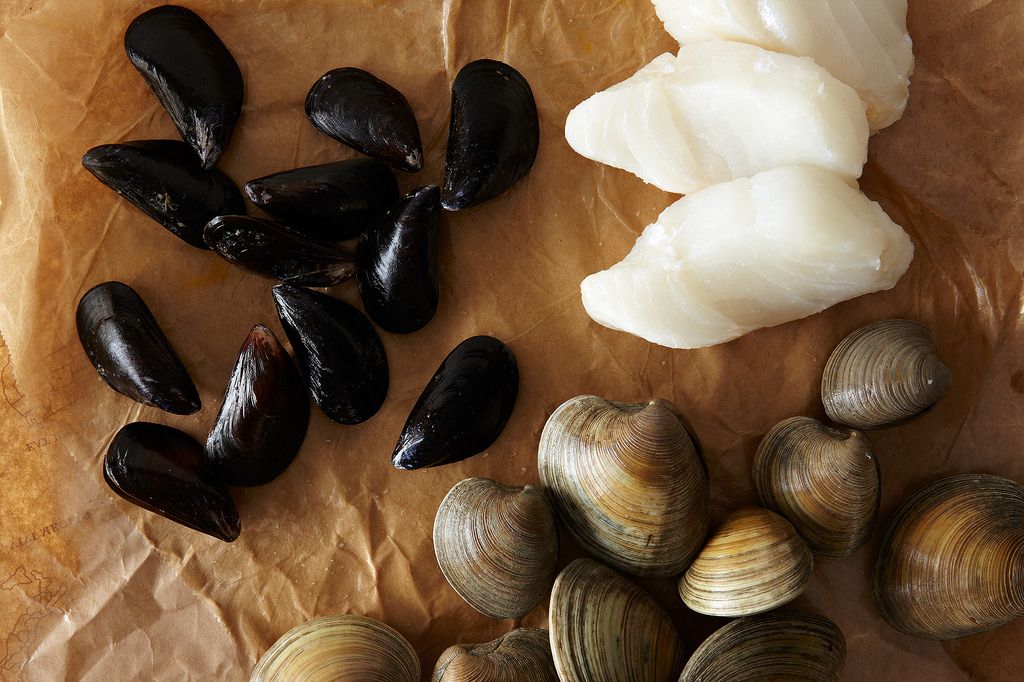 2. Take a second to pull everything together in one place. Once you start cooking, this dish moves pretty quickly, so “mise en place” here is helpful.

The irony of making fideos is that you don’t really have to buy actual fideos. I break angel hair pasta into 1-inch pieces. For every 8 ounces of noodles (which will serve four normal eaters or two 16-year-old boys), you will need 3 cups of warm broth and 1/2 cup of white wine. This ratio will bring the finished fideos just past the point of al dente. If you like a soupier dish, you can add more liquid but understand that the noodles will keep sucking it up even after you take it off the stove.

You’ll need good olive oil, a chopped allium (my preference is sweet white onion), a diced green pepper (bells are standard, but poblanos are more interesting), a couple of cloves' worth of sliced garlic, and a small can of chopped tomatoes.

For spices and herbs, you’ll need some smoke (a teaspoon pimentón, 1/4 cup chopped Spanish chorizo, or a tablespoon of adobo sauce), a bit of earth (cumin, white pepper, oregano, bay, and/or fresh thyme), and a touch of sweetness (a pinch of either saffron, which is traditional, or a pinch of sugar, which helps round out the acid of the tomatoes).

I like to add a little greenery at the very tail end of the process, so having a cup full of thawed frozen peas or a handful of cilantro or flat parsley at the ready here will be helpful. And have a lemon to squeeze, in case you think a bit of brightness could do it some good. 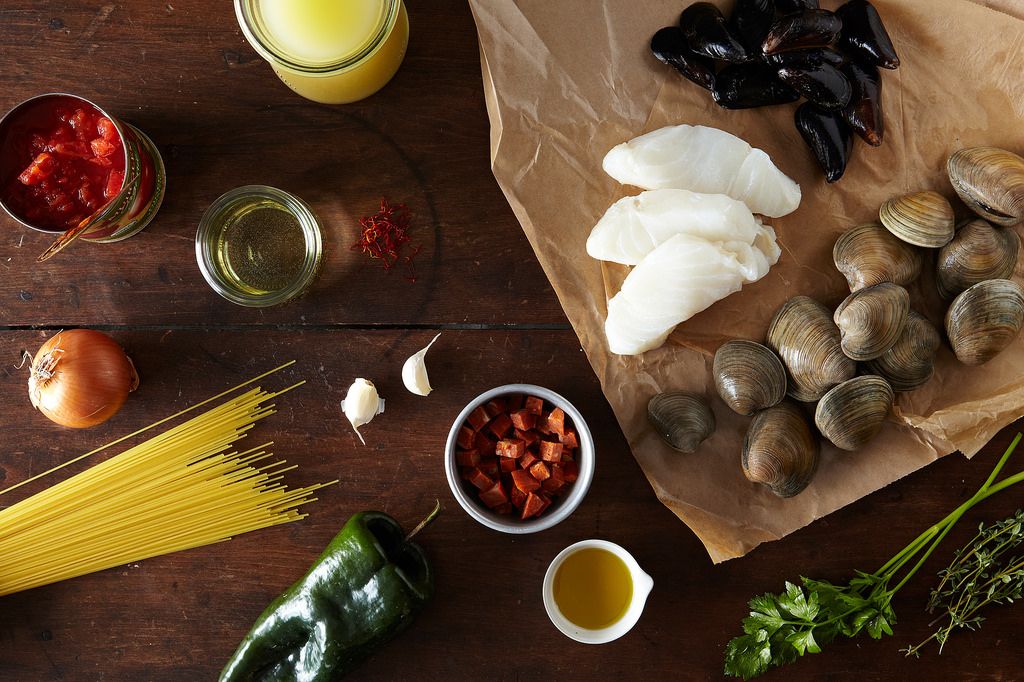 3. Brown the noodles. This is actually the secret of the dish. By cooking the noodles in a glug of olive oil in a heavy pan until they are golden brown, you’re adding a nutty note and infusing them with fat that will help carry the flavors that are added later on in the process. Don’t skip this step. It takes less than 5 minutes. 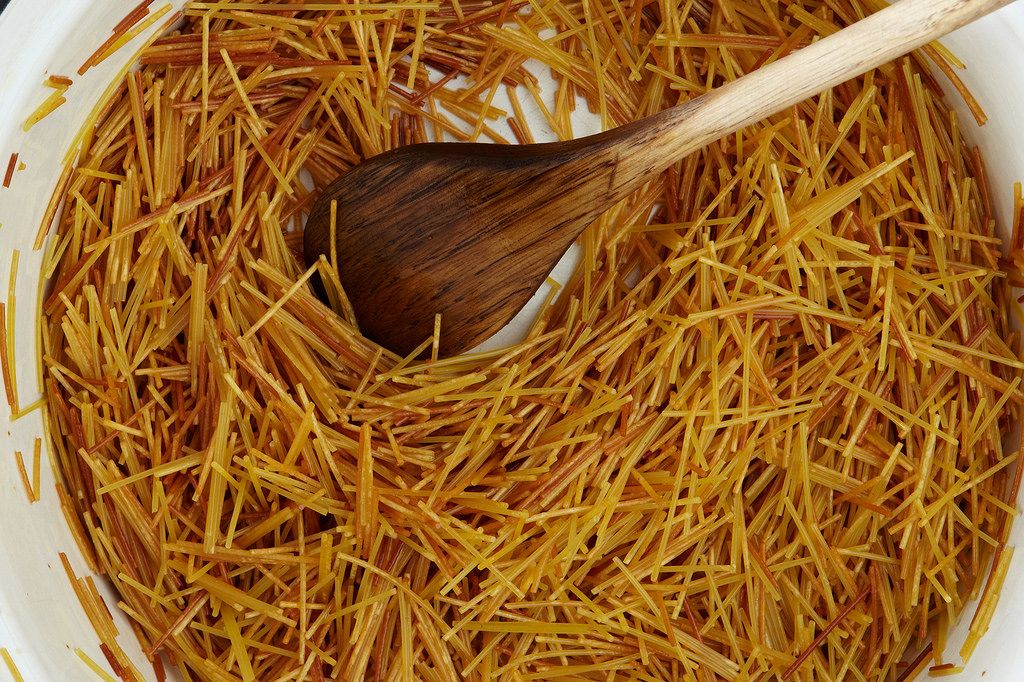 4. Build your flavor. Lower the heat and sweat the onions and peppers in with the pasta for a few minutes. Stir in the garlic, cooking it only until you smell it. Add the wine and allow it simmer off before you stir in your chosen smoky element, a total of 2 teaspoons of spices and herbs, a teaspoon of salt, and the can of tomatoes. Bring the sauce to a full boil and add broth and saffron or sugar. 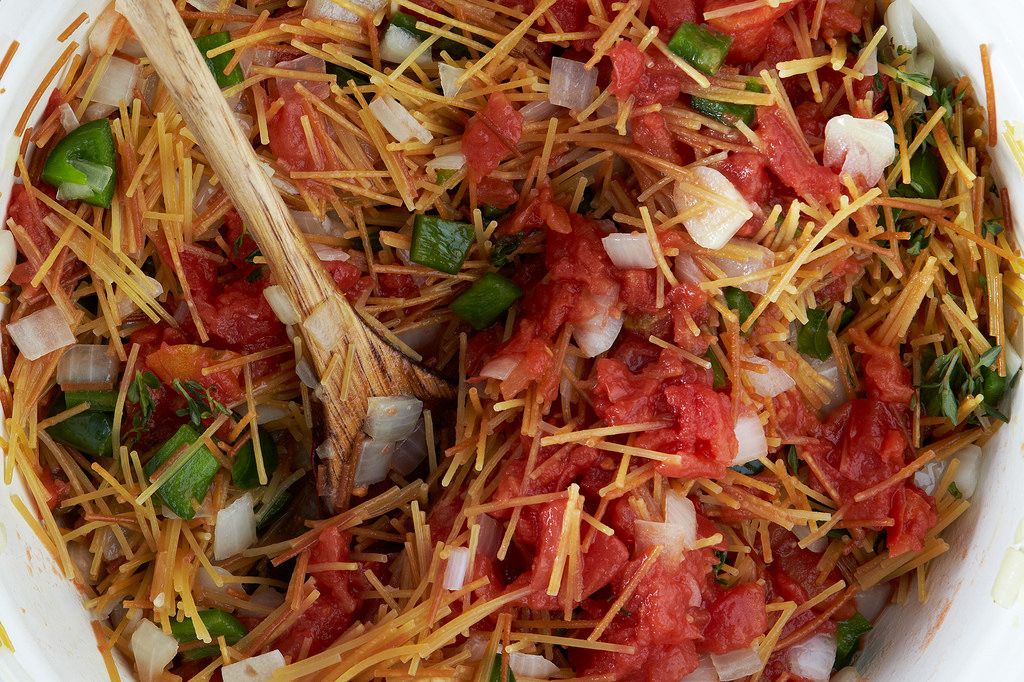 5. Slip in the seafood at the right time. This step takes a bit of calculation. You have to understand how quickly your seafood will cook in relation to how long the noodles will take to become tender.

The noodles take about 10 minutes to finish cooking. Generally, white fish braises (that is what we’re doing here) at a rate of 10 minutes per inch of thickness. So nestle those fillets into the pan as soon as the sauce comes back to a boil. Littlenecks can take up to 7 minute to open, so they go in next. Mussels generally open in five minutes. And shrimp cooks in two. 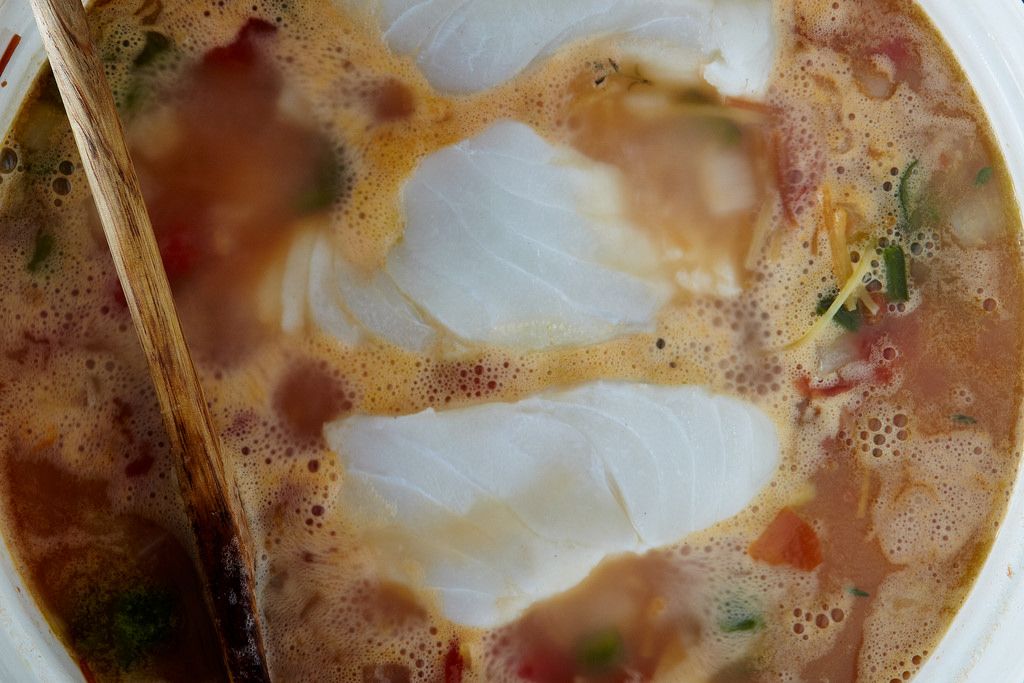 6. Don’t be afraid to stir. Unlike paella makers who have to sit on their hands to refrain from stirring the rice in hopes of getting a lovely crust on the bottom, we fideo lovers can move things around at our leisure. It’s actually encouraged, as it helps the shellfish cook evenly. 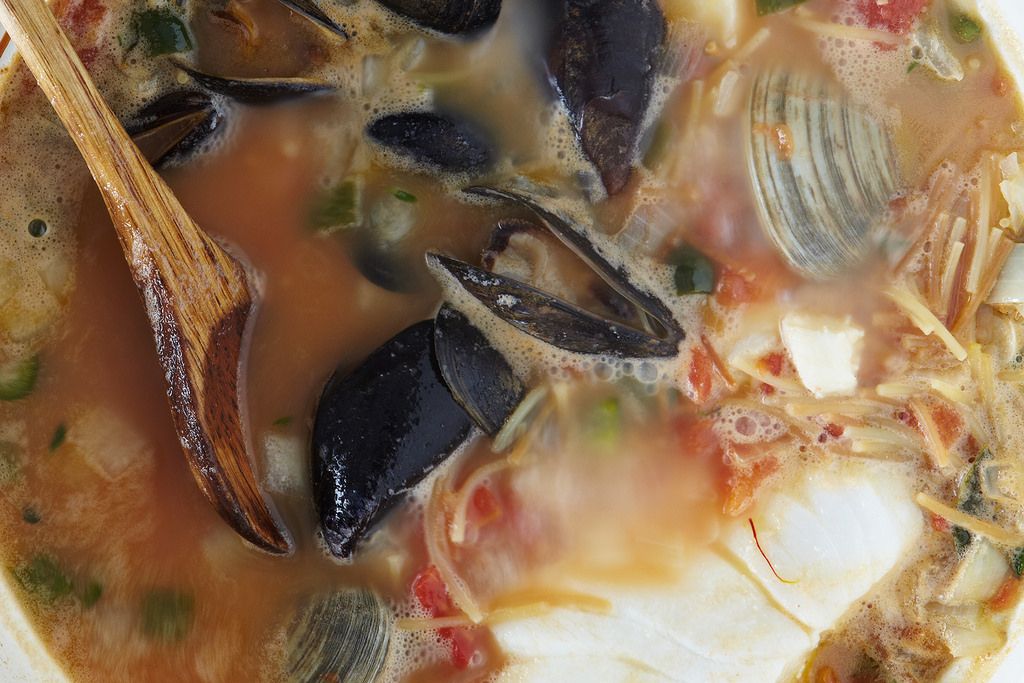 7. Serve immediately. This is one of those dishes best eaten directly out of the pan. But before you put it on the table, remove any unopened mollusks, taste to see if it needs a shot of acid, and sprinkle around a bit of something herby and green. 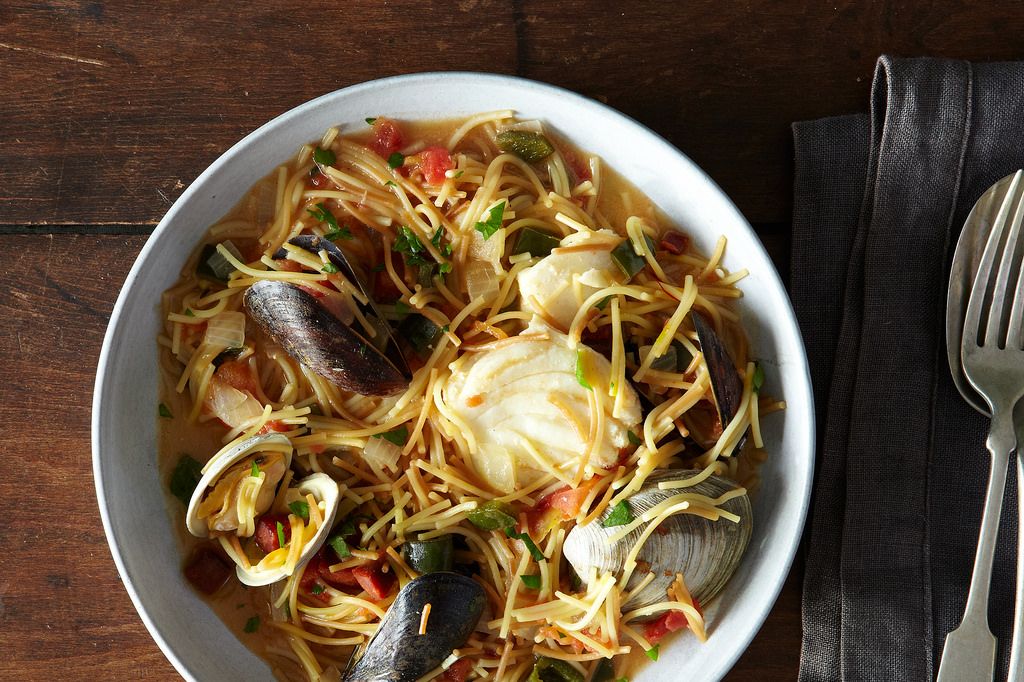 We're looking for contributors! Email [email protected] and tell us the dish you could make in your sleep, without a recipe. Check out what we've already covered.

sevenfaces December 1, 2014
As I was reading through this un-recipe to prepare, I was really sad to see the line "remove any unopened mollusks"... hoping you meant to add "to shuck and eat in private where table manners won't matter" as they are perfectly safe to eat! http://www.abc.net.au/science/articles/2008/10/29/2404364.htm
If Food52 ever do a food-myth-busting series, I really hope this makes the cut; thinking about all those mollusks wasted since 1973 makes my tummy hurt!

Anyway, I will be making this in a couple of nights' time with fish, mussels and prawns. I can't wait!

sevenfaces December 3, 2014
This was a quick and delicious dinner. I used spaghetti which was fine, but I think next time I will use angel hair as I think it will suit the brothy briny dish better. I used paprika for my smoke and oregano for my earth. Really lovely. Thanks for sharing!

Alyssa November 4, 2014
I had fudea for the first time in Barcelona and loved it-I loved it more than paella! Beautiful recipe!

Cristina M. November 3, 2014
Fideos always remind me of my grandma's chicken soup. I don't know if she ever used them with seafood, but I think she would have liked this.

wildgourmet November 3, 2014
as someone who has always preferred cooking by feel, this is one of the best descriptions I've yet read. from a gypsy mainer to a fellow mainer, thank you.

cheese1227 November 4, 2014
Thank you wildgourmet! Seeing as I have only been in Maine for 2 years and a bit, does that make me the gypsy Mainer? I certainly know they will never consider me a true one....

wildgourmet November 4, 2014
i'm a gypsy because of my travels since first living in maine. give it time--you'll always be from away, but you can be a mainer from away as well.