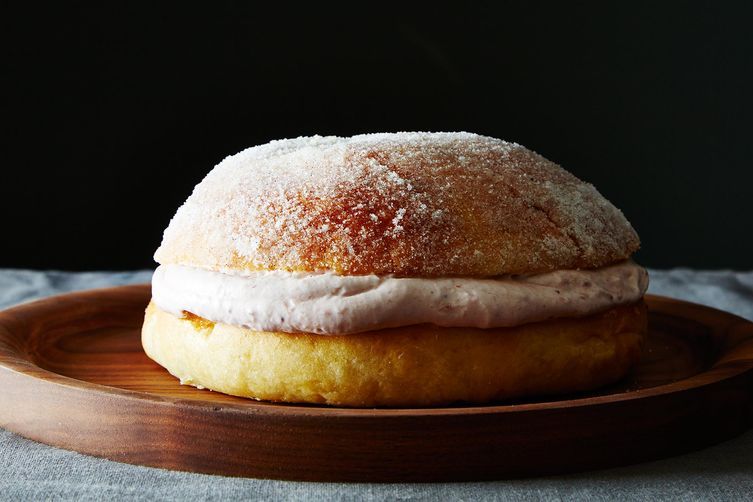 Please don’t tell my parents (or worse, my grandparents -- oy!), but I've come down with a case of Christmas envy. My proclivity towards shiny things like tinsel and my gripping desire to feel jolly have made me particularly susceptible. Did it start when my friend realized I didn't celebrate Christmas, looked at me like I was a recently-kicked puppy, and asked, "But when do you get presents?" Maybe it did. Or maybe it started when I saw Love Actually for the first time. It’s hard to say.

It’s less that I'm unsatisfied with my own traditions and more that I want to have a part in it all. I want to spin the dreidel and decorate the tree and grate potatoes for latkes and light the Hanukiah and eat cake. Because for all of the ways that Hanukkah’s been skewed to resemble Christmas -- in a victory for the toy industry, we get presents now, too (and even eight, if we’re lucky) -- we still don’t have cake. No fruit cake; no gingerbread; no stollen. The triumphant Hanukkah dessert is sufganiyot, but my family has never been ambitious enough to heat up a pot of oil to fry them, and that's left me longing for a Festival of Lights tradition of my own. And so, cake! Cake was the gaping hole that I could fill with something of my own creation. (I dare you to watch this video and not agree with me.)

More: Now is your time to eat a diet of fried foods for "religious reasons." 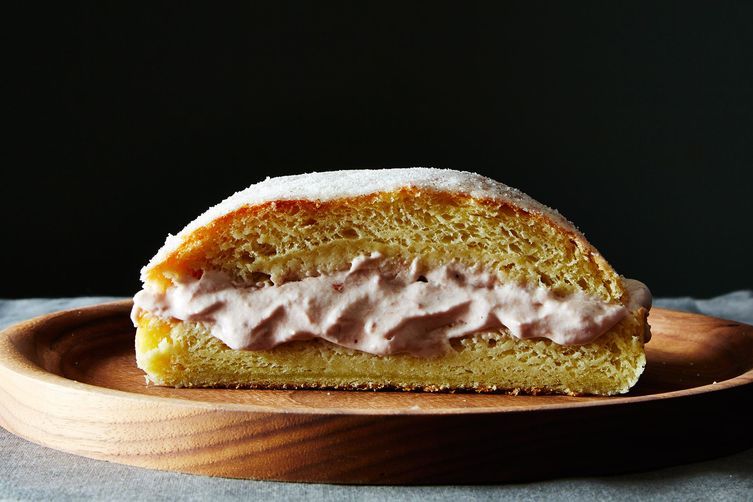 It took a lot of early morning cake consumption to get this cake right. Some said it couldn’t be done (some also said the Maccabees’ oil wouldn’t last, but they were wrong). And I had doubts, too. For the weeks that I was trying to wrap my head around how to make a jelly donut cake, I couldn’t talk about anything else. The question “How would you make a jelly donut cake?” became my icebreaker at parties; I slipped it into conversations with Dorie Greenspan and Alison Roman; I even tried to use my eighty-eight Twitter followers to crowdsource (that was a low point). Molly Yeh suggested that I deep-fry an entire cake, but I saw the headline “Cake Columnist Dies in Freak Frying Accident” flash before my eyes.

Eventually, with the advice of many others, I figured out how to make a cake with a donut-like inside and a barely crunchy outer layer (a technique inspired by the duffin -- a donut-muffin hybrid): brioche is enriched with extra sugar and shaped into a ball; immediately after it comes out of the oven, it is doused with melted better, which you’ll hear sizzle and fry as it hits the hot pan; in the pièce de résistance, the whole thing is sanded with sugar.

After that, the next challenge was the jelly filling. We ruled out injecting the cake: too surgical. We ruled out using straight-up jam: too heavy. I took Kenzi’s suggestion, turned to Rose Levy Beranbaum’s Cake Bible, and made a raspberry whipped cream filling light enough to float atop the airy brioche yet jammy enough to be identifiable. At the office, we decided to cut the cake in half like a giant hamburger, plop some filling on top, and reunite the two brioche buns. Then we all smiled about how much it resembled, both in apperance and in taste, a donut. I thought we all deserved a handful of gelt.

You are going to have to do some planning ahead to bake this cake. Good thing Hanukkah doesn't begin until next Tuesday! And as my mom always says, “If the Maccabees could defeat Antiochus, you can make brioche.” The recipe is lightly adapted from Dorie Greenspan’s brioche in Baking Chez Moi, so you know you can trust it.

For the brioche dough:

For the raspberry whipped cream filling:

How would you make a jelly donut cake? Please share your thoughts in the comments below. And Happy Hanukkah!

cms December 17, 2020
I have made this cake five years in a row- it immediately became a family favorite and is now a tradition! And since it makes two cakes, I can share with friends. Thank you, it is a mega-hit!

Louise December 7, 2015
Is it ok to bake the cake the day before it is being served?( I can fill it the day it is served) thanks

Henry J. December 5, 2015
wow. I missed this recipe last year, but just in the nick of time for Hanukah this year. The Krispy Creme that I had this morning certainly won't compare.

rockchick December 15, 2014
Can this be done in advance? Like if I prepped the dough tomorrow and made it at home Wednesday to bring to a Wednesday night Hanukkah celebration? I don't know if it loses its UMMPH! during travel.

Sarah J. December 15, 2014
The dough will stay good for a day or two, but I would definitely wait to fill it until right before you're ready to eat! Yum!

Sandi December 10, 2014
Love this idea; do you think it would work non-dairy? almond milk? coconut oil?

Kenzi W. December 9, 2014
I miss how often this cake was in and around our office for a few weeks. Let's make another one.

Sarah J. December 9, 2014
I wanted to, but I was worried it would sink it to brioche (like a soggy jelly sandwich)! This whipped cream tastes very jammy.

Catherine L. December 8, 2014
it's like the paczi of my dreams but better because it was made by you SJ.

Rachel C. December 8, 2014
Everything about this makes me deeply happy.