Today: The best-yet recreation of a traditional Roman recipe with American ingredients -- and why crushed ice belongs in your salad. 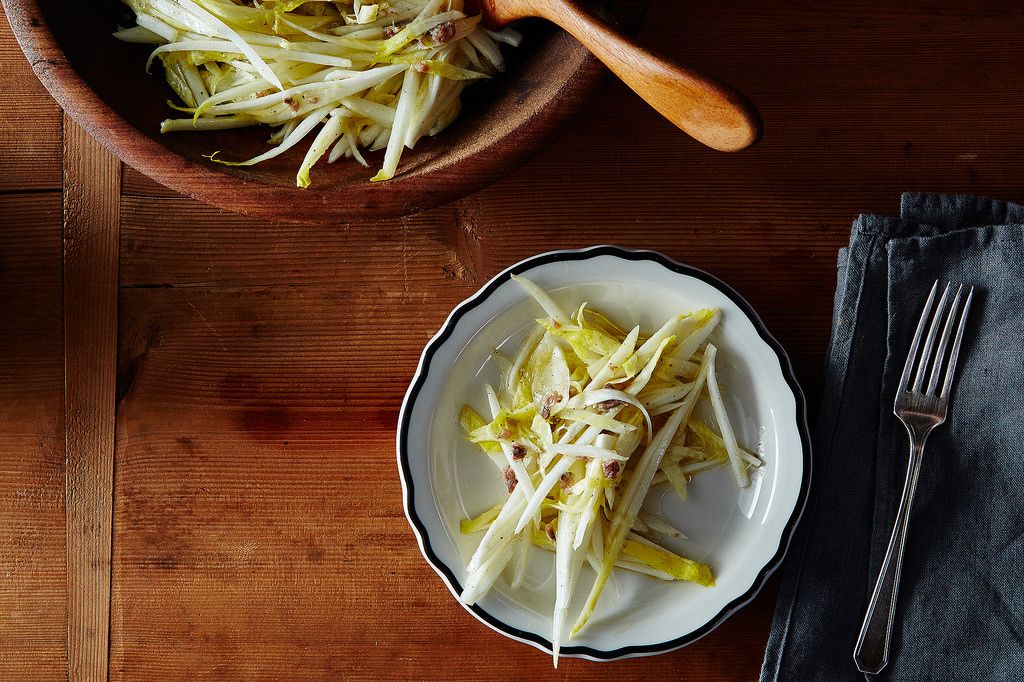 If you were to order this salad at Prune, you'd get a scrappy heap of rough-cut slaw, curling at the tips a little like bean sprouts (don't worry, it's not bean sprouts). It would have a second pile of chopped anchovy on top: a chin-out dare, a poke in the center of your chest. Can you handle this? the anchovies say. And there will probably be a couple visible chunks of ice. All of this is deliberate. 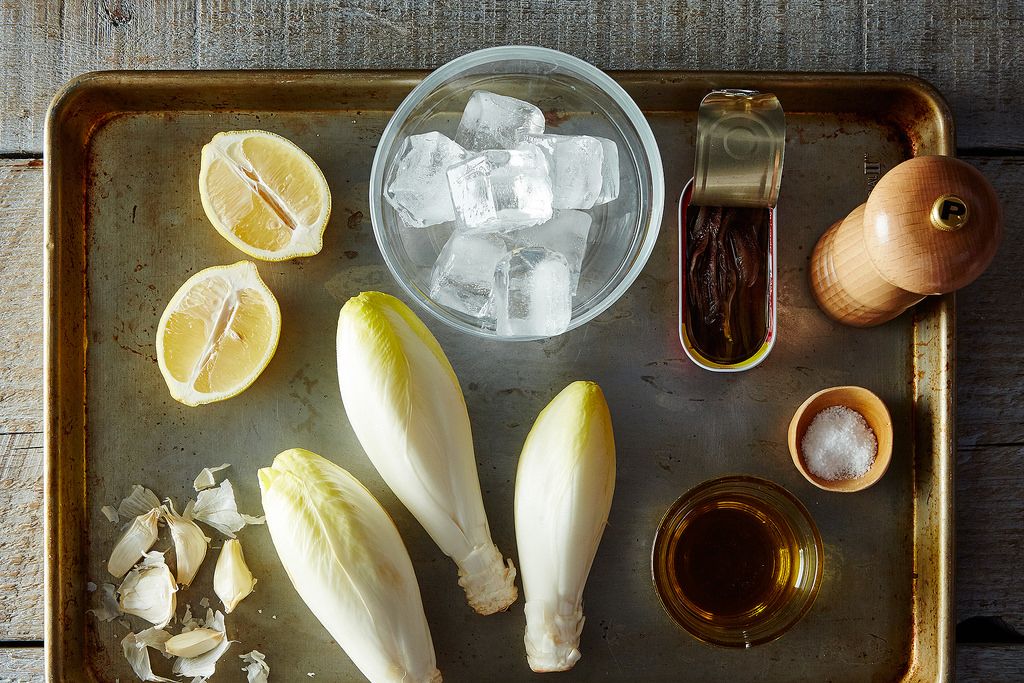 Lest you think someone's drink tipped into the mise, your server will tell you that the ice is meant to be there. "Some customers will be weird about the ice if a few slivers remain in the tangle, as if you made a mistake," Prune chef-owner and author Gabrielle Hamilton writes to her cooks and, via the Prune cookbook, to us. "Remind the servers to remind the customer that the shaved ice is intentional." This last part is highlighted in pink.

More: Get yourself a signed copy of Prune in Provisions. 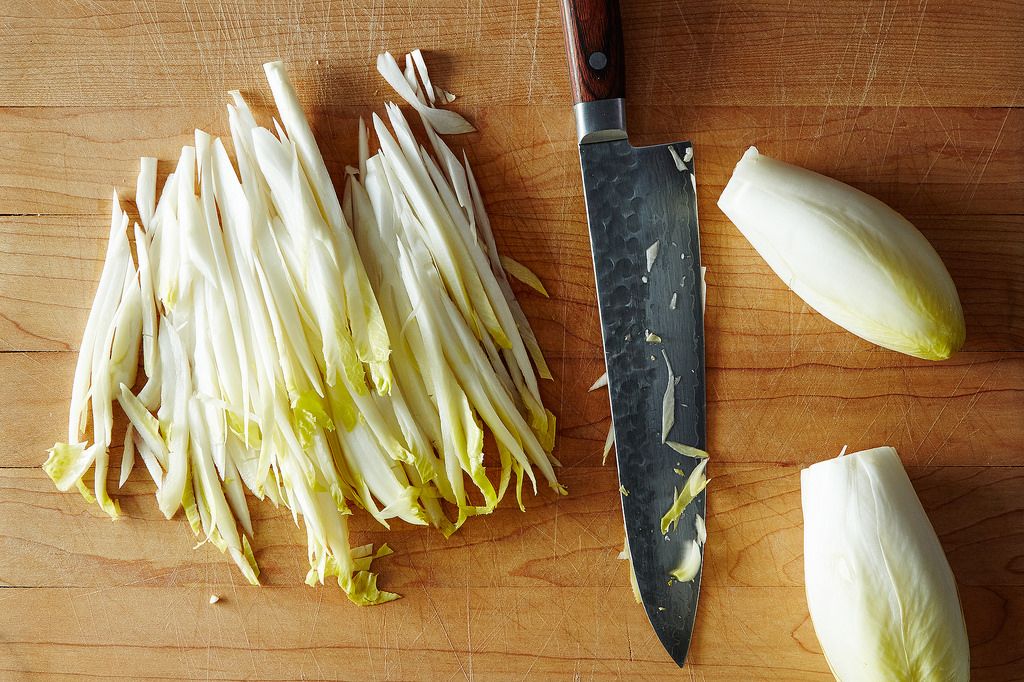 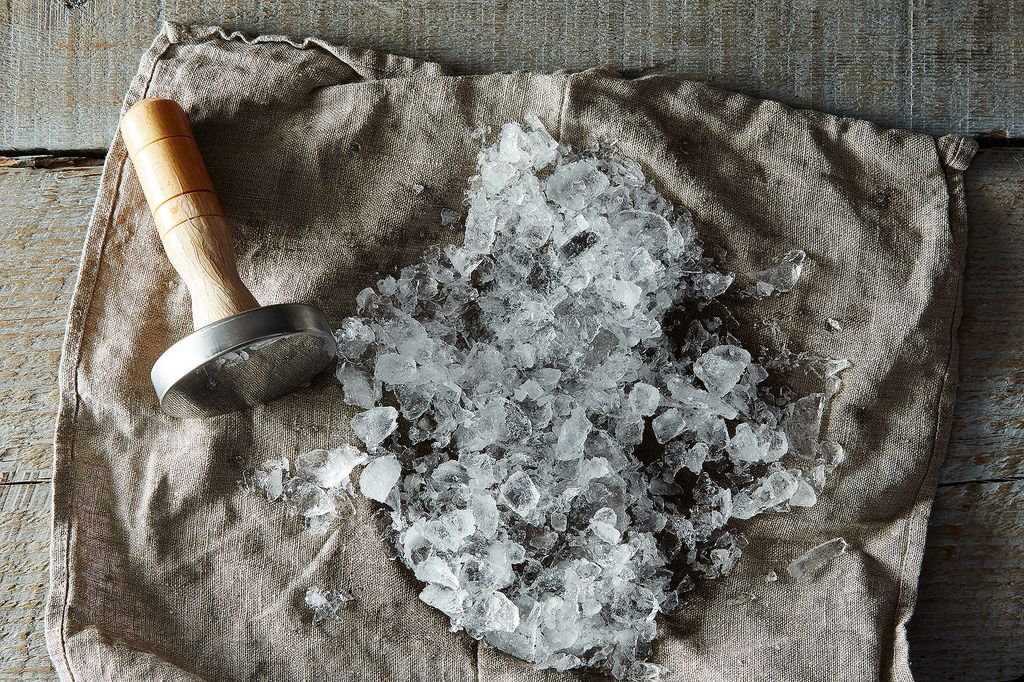 Your server will explain that the melting ice cubes are essential for watering down the very intense dressing, which is alight with grated sticky-fresh garlic, chopped anchovy, and lemon. The ice will also keep the endive curled up and crisp, the dressing focused and sharp. At room temp, it could verge on funky, but icy-cold, it's a bracing, invigorating slap in the mouth. Without crunching down on the ice itself -- you probably shouldn't aim for that -- one bite in, you understand why it's there. 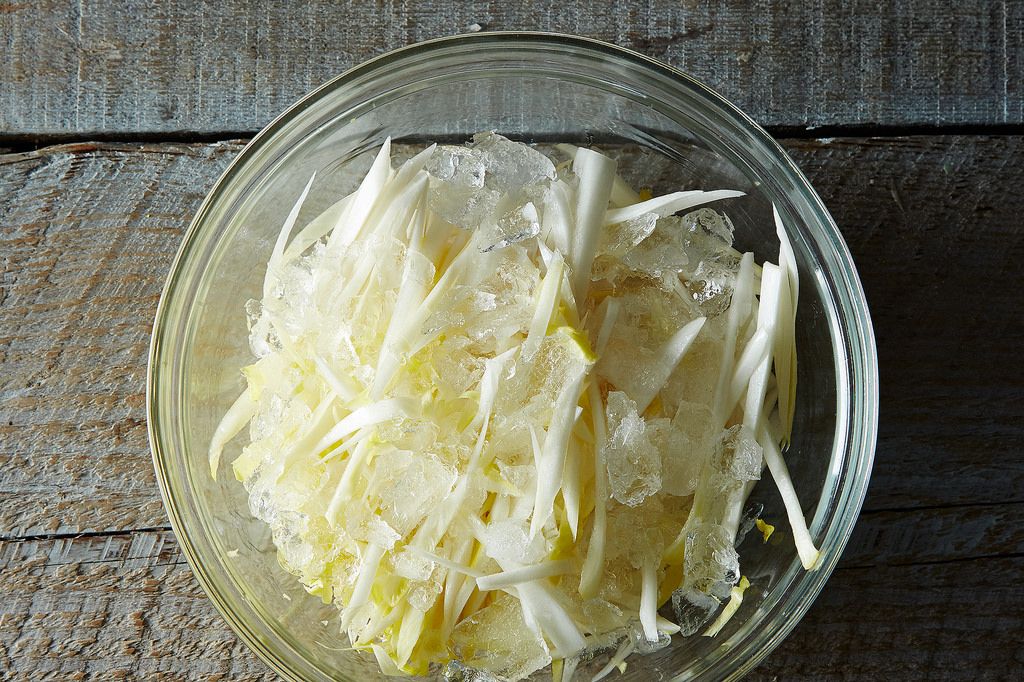 At home, it comes together quickly: Slice Belgian endive into long, thin strips, then dump a cup of crushed ice over them. (If your ice machine isn't self-crushing, just wrap ice cubes in a tea towel and bash them with something heavy.) Before it melts completely, an entire can of anchovies gets chopped, half a lemon gets juiced, and 4 or -- heaven help us -- 5 garlic cloves get grated into a bowl. The now-thoroughly-chilled endive and all its accrued ice and cold water get dumped in last, and it's time to toss and serve. 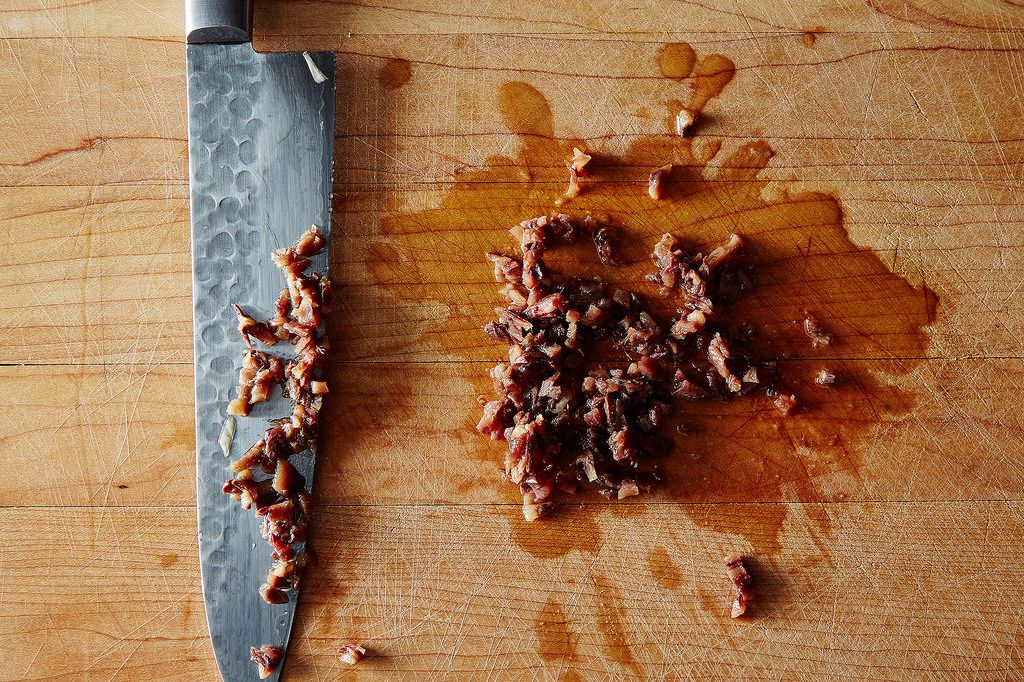 It's a loud, almost clamorous, very, very good salad. Each bite is fire, crunch, cool. This, Hamilton says, is the closest she's come to recreating a Roman-style puntarelle salad, which is revolutionary, since puntarelle is still hard to find most everywhere in the U.S. and, even when you do, it's awfully finicky to prep. "Finally figured out to give up on American dandelion as a substitute," she tells her cooks, and us, so we don't bother.

When I asked Hamilton to clarify why Belgian endive is a closer match, her answer was so clear and beautifully articulated, I'm sharing it in full here:

"The Belgian endive is, I really swear, an uncanny stand-in, a closer and better approximation of puntarelle than American dandelion is. It has the same water content. A very similar satiny quality to the leaves and the stalks as the glossy white stems of the Italian puntarelle, which is the majority of the part used in the salad in Rome/Milan/etc. The bitterness is comparable. Even the look -- aesthetically -- is more convincing. When you soak the ribbons of Belgian endive in the ice water they respond in pretty much the same curling up way that the puntarelle does. It also "tames" as easily as puntarelle -- so you can dress it in the exact same way, with just garlic and anchovy and lemon juice and olive oil and a little ice water. The American dandelion can be so so bitter sometimes, often, that in order to tame it you need more fat, more protein -- usually a runny egg or pancetta and some of its rendered fat -- or both. I like those things very much, but there is a certain elegance in taming the beast with one gentle hand rather than two fists." 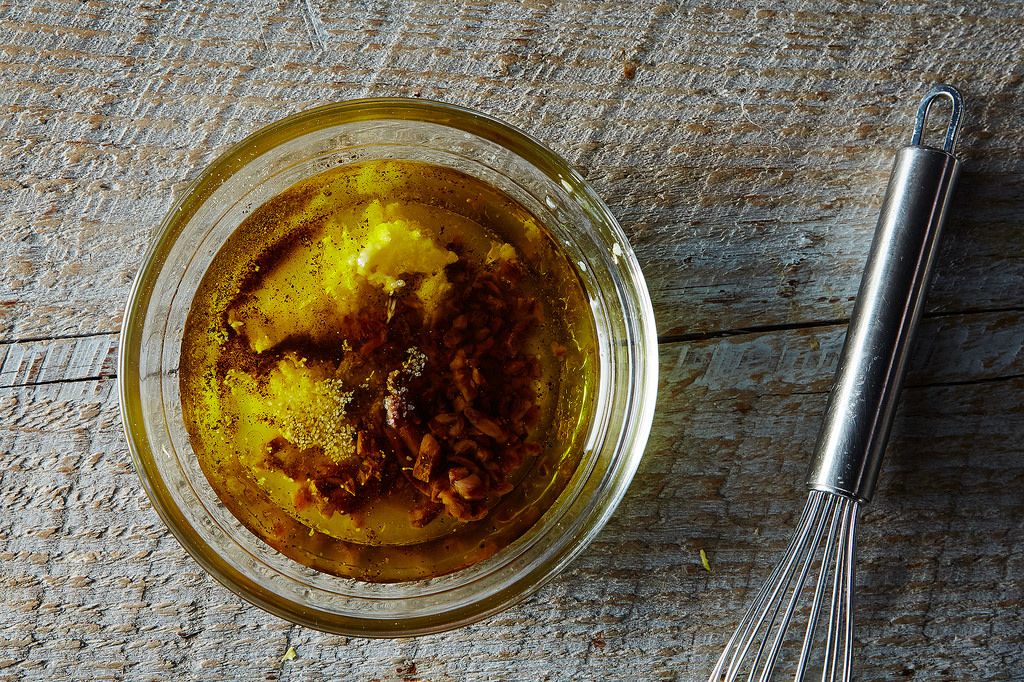 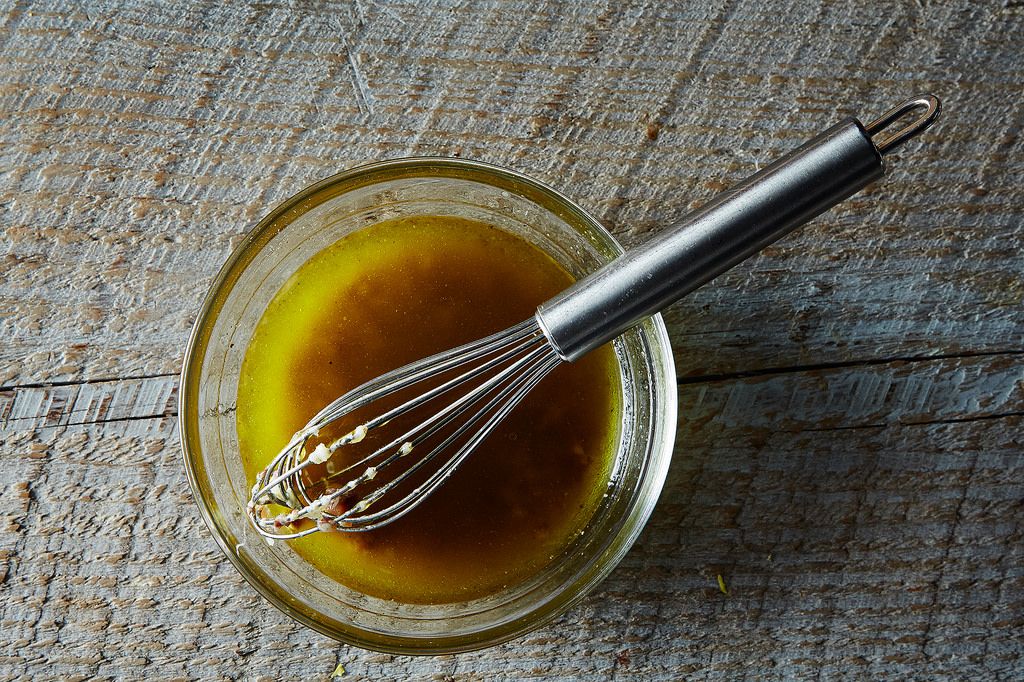 Belgian endive, like puntarelle, is a light but noticeably bitter green, especially since everything we tend to eat with it is meeker: a light vinaigrette, slices of apple, soft cheese. Here, under a lot more fire, bitter may not be the first thing you notice, but it's there -- it gives a stiff girdle to the wildness. A weaker green would disappear. 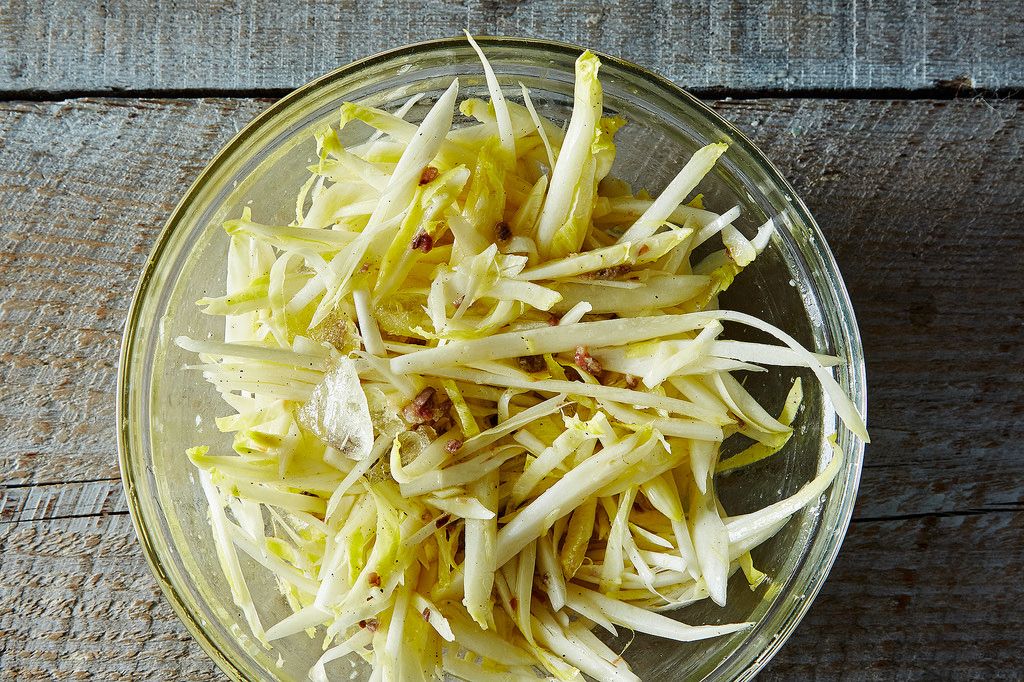 You could serve this with only good bread and butter or cheese, this being a season of simplified meals. Or you could dispense with that and eat it along with something rich, salty, and meaty -- a brothy soup, braised fish, a spaghetti carbonara or stinging cacio e pepe -- like Hamilton herself might.

Glenn M. January 27, 2015
Why is it called an escarole salad....it's a Belgium endive salad. Escarole in the US is a leafy, lettuce-like chicory.

Risottogirl January 22, 2015
I can get puntarelle all winter at my farmers market in San Francisco so I use that :)

Carmen K. January 22, 2015
Just posted a couple of photos on my @conditionreport from the field trip to the California Endive Farm. It's a fascinating process. The first year that sweet blue chicory weed is field ground, harvested and the roots are subjected to an artifical winter. The roots are then grown in the dark (just like the Belgian farmer who first discovered them growing in his cellar during the war). The Prune salad is pure heaven for those of us who adore anchovies and bitter.

Carmen K. January 22, 2015
In the US the only place that grows endive from Belgium chicory stock is the California Endive Farm in Rio Vista, CA. Had the pleasure of touring the facility with my local Slow Food friends. It was fascinating

Marcella H. January 22, 2015
It is not escarole, it is Belgian endive. The illustrations and the instructions set you on the right track. Incidentally, Marcella first proposed this puntarelle treatment for endive in 1997, in Marcella Cucina (Harper Collins), page 394 if anyone wants to look it up. Victor Hazan.

Sabina January 22, 2015
I opened this recipe because the email said it was an Escarole Salad, endive is something entirely different. Please explain.

haapi January 22, 2015
LOVE puntarelle and love this traditional dressing for it. However, I just throw it into a chopper/mini-blender. Easier, and creamier.

Judith F. January 21, 2015
I use frisee for this salad, as it is close to the same look and slightly bitter as puntarelle. I lived in Rome for 20 years and used to eat it fresh almost daily. Puntarelle are a bug to clean however.

Scott January 21, 2015
Where I come from Escarole was and still is called "Curly Endive" and Frisee in France; the base for my beloved Salade Lyonaise, and yes both Endives are from the chicory family. BUT is quite often hard to find and is rather expensive, perhaps this is the reason she used Belgian Endive.

Sharon H. January 21, 2015
What is heartening (and I did not expect it) is that so many folks know the difference between escarole and endive ;-)
Author Comment

Alicia January 21, 2015
I'm confused. Why is there no escarole in this escarole salad? Is there a reason we should use Endive instead of Escarole? This creates a glaring omission in what appears to be a good recipe.
Author Comment

Kristen M. January 21, 2015
Alicia, see my answer below -- it's not actually an omission (do use Belgian endive). It is a very, very good recipe, so please don't let that scare you.

Alicia January 21, 2015
Kristen, consider renaming your recipe using "Chicory" instead of escarole. It is, quite honestly, ridiculous to use any ingredient in a recipe title that does not primarily call for that particular ingredient! And the reader should not have to scroll through the comments for clarification.

sandy P. January 21, 2015
Looks great. I love puntarelle, sometimes I'll order two at a single seating. Thanks for posting this.

Sharon H. January 21, 2015
Hi - I wonder why it's called Escarole salad? Because it's not escarole! I am going to try it - looks fantastic.
Author Comment

witloof January 21, 2015
Just wondering why this is called escarole salad when it's made with endive? Shouldn't it be called endive salad? Escarole is another vegetable entirely.

HalfPint January 21, 2015
Escarole is a variety of endive, though Belgian endive (& also puntarelle) is technically a variety of chicory. Both are of the genus Cichorium.

Mary L. January 21, 2015
Agreed. I put escarole and endive pretty far apart from each other -- escarole lettuce has a harsher, herbier flavor than endive IMO. still, i'd like to try this "escarole" recipe
Author Comment

Kristen M. January 21, 2015
Thanks for asking -- this is what Hamilton calls the salad on her menus and in her book, so I honored her intentions. (I'm also following up to ask her for clarification, which I should have done before!)

Greenstuff January 21, 2015
LOVE that someone named witloof weighed in! (Witloof is what Belgian endive is called in Belgium.)
Author Comment

Kristen M. February 3, 2015
Hi all, I opted to update the title to endive for our purposes here. Thanks for sharing your thoughts.