Today: The citrus fruit you've been missing out on. 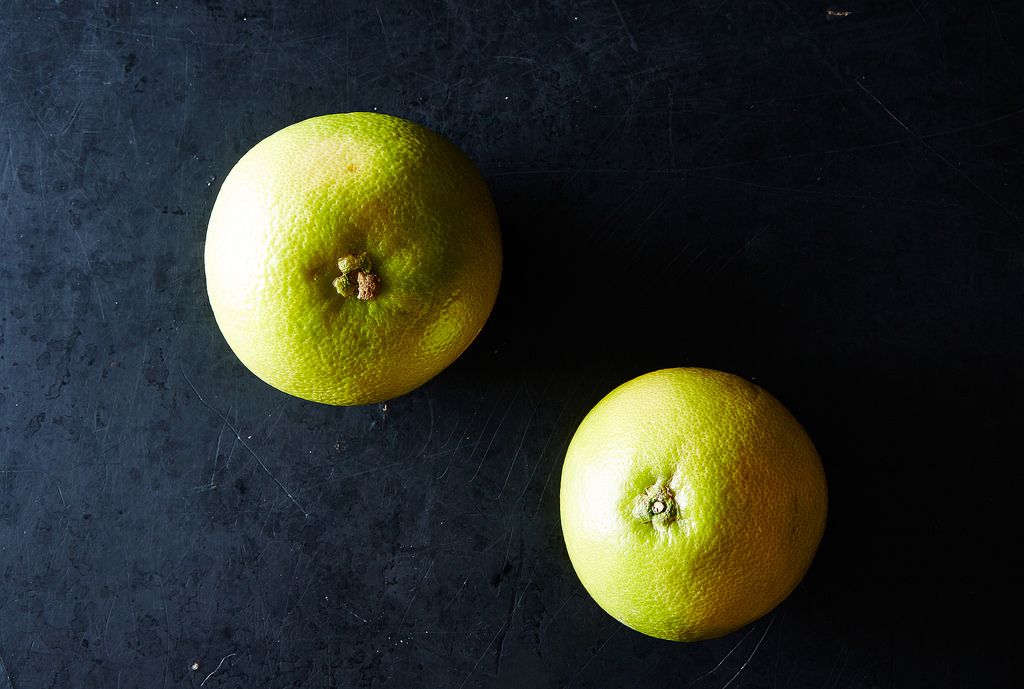 Citrus fruits are the bright spots of this time of year, our vibrant reminders that eating seasonally in the wintertime needn't be restricted to greens and storage crops. But if your citrus consumption has been limited to oranges, grapefruit, and Meyer lemons, you’ve been missing out. There are pomelos, finger limes, and perhaps the very best of all: oroblancos (which you may also see written as oro blanco or Oroblanco) -- a cross between a pomelo and a white grapefruit.

More: And don't forget about blood oranges, either.

If you remember anything from your high school Spanish class, you’ll likely be able to discern that its name translates to "white gold," and we're not the only ones who think its sweet golden flesh (1, pictured below) is more than deserving of its luxurious name and all of the superlatives you can throw at it.

Russ Parsons, Food Editor at The Los Angeles Times, has been singing its praises since 1993, more recently saying: “The Oroblanco tastes just like the best grapefruit you've ever had -- sweet with a perfectly balanced citrus tang and a hint of something that tastes almost like pine.”

Marian Burros says she always knew that company was coming to dinner when she’d see her mother “carefully sectioning white grapefruit halves with a serrated knife, a bottle of maraschino cherries at the ready for topping,” but proclaimed: “If my mother had had Oroblancos, she would never have bothered with maraschino cherries.” This is because, as she says, the oroblanco "has a superb balance of acidity and sweetness." 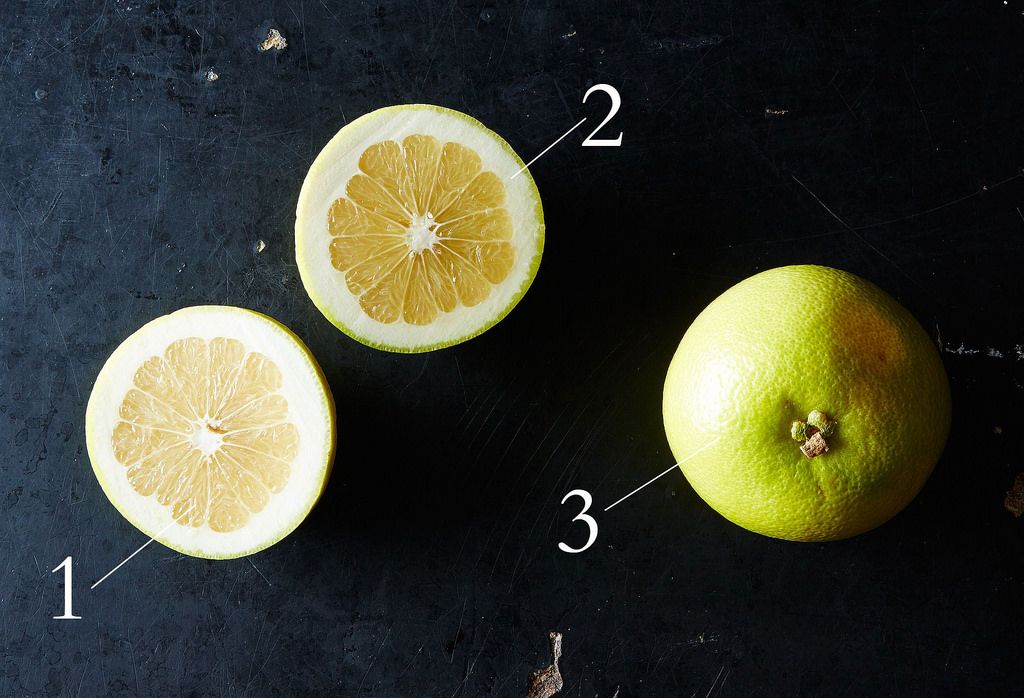 If oroblancos are so good -- and they are -- why are they sometimes hard to find? They aren’t as popular as they should be (yet) because they have a couple of traits working against them: One, they have a thick pith (2, above), and two, their skin is green (3, above) or yellow-green when ripe -- and we know green food can be a hard sell sometimes.

There’s still plenty of time for oroblancos to become a citrus star, though. For one thing, the oroblanco is a fairly new addition to the citrus family -- it was developed at the University of California, Riverside, in 1958, but wasn’t commercially introduced until the 1980s. And for another, the oroblanco has had success in other markets. In How to Pick a Peach, Russ Parsons explains: “Israeli farmers picked it up, renamed it the Sweetie and marketed it in Japan as a green fruit. The Japanese love it, too, and now, twenty-five years after its introduction, Oroblanco plantings are again on the rise.”

More: Other types of produce have benefited from marketing campaigns, too, like sea beans and Jerusalem artichokes. 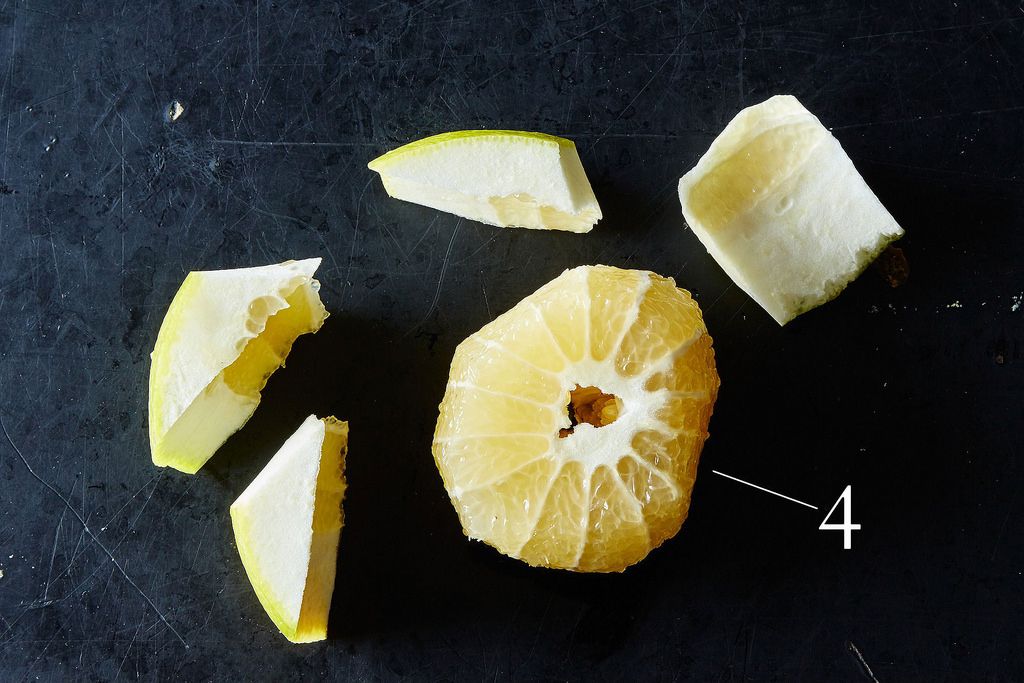 Although it isn't necessary, oftentimes the oroblanco's membranes are removed (as is the case with pomelos) because they can be bitter. If you know you’re going to want to segment the fruit, cut away the rind and pith (4) while trying to minimize how much fruit is removed. Then segment the fruit away from the membranes. (Need a step-by-step visual? Here’s how to segment citrus like a pro.)

Once you find oroblancos, eat one or two (or three) out of hand, and then start using them anywhere you’d use oranges or grapefruits. Here are a few ideas to get you started:

Tell us: How do you like to use Oroblancos?

Corj February 19, 2015
They sell them at my Costco as "Sweetie" Jerusalem grapefruits. I bought them last week and they are a true cross between a pomelo & grapefruit. Downside is that like a pomelo they are 50% pith. I've tried peeling them like an orange but that's too time-consuming. We prefer eating them grapefruit-style but they;re quite small and sometimes you get a bit of bitterness from the pith. While they're sweet I think they're not that great in the end.

Davis A. January 2, 2016
Try cutting supremes. Level off each end, then pare off the skin and pith with a sharp knife, carving down from top to bottom. Then, with a paring knife, cut between each membrane and the sections will fall out.

Rebecca @. February 3, 2015
Has anyone been able to find these in the LA area? I haven't seen them but but I'll keep an eye out!

breezemuns February 4, 2015
Yes! At almost every farmers market in Los Angeles you can find Oro Blancos. To be honest I have never not seen them at a farmers market during the winter season.

hardlikearmour January 31, 2015
LJH -- you're killing me with the delicious citrus. I started up a batch of pomelocello after your post on pomelos. Now I want to start one with Oroblanco's too (I think a it would turn out a lovely spring green).
Author Comment