How to Make Oysters Rockefeller Without a Recipe

Today: No luck with love this Valentine's Day? Maybe Oysters Rockefeller can help with that. And if not, you'll still have a new dish in your repertoire that you'll want to make even when it's not the most romantic day of the year. 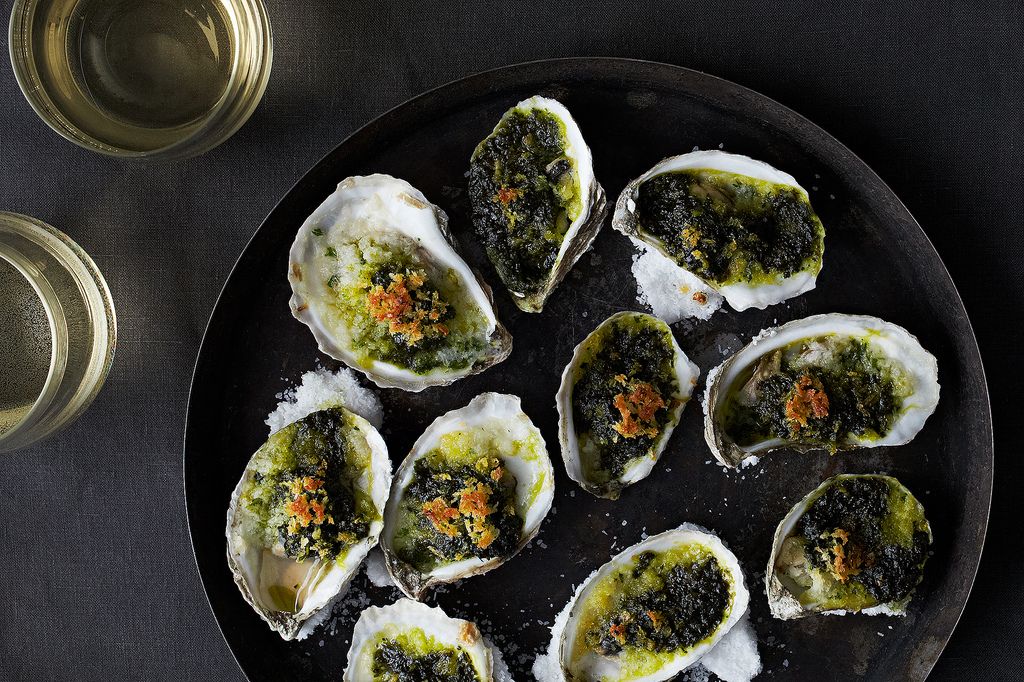 There is some science out there that sets up raw oysters as killer aphrodisiacs. But not every potential lover is turned on by the sight of raw oysters, are they? I’ll typically take a half-dozen on the half shell to taste for mer-oir (like wines and terroir), but I generally prefer my oysters cooked. And my own research (albeit happily limited in scope by my 20-year marriage) shows that cooking oysters doesn’t necessarily kill the romance.

Oysters Rockefeller is a well-known cooked oyster dish. Making it without a recipe is a necessity because the original formula was never actually divulged by its creator. Jules Alciatore, the second generation chef and owner of Antoine’s in New Orleans, created it at the turn of the twentieth century. He was looking for a laudable replacement for Escargots à la Bourguignonne (snails in garlic-herb butter) on his menu because the European snail trade had become unreliable. He turned to oysters, which were abundant in his neck of the woods at the time. While Alciatore kept his original recipe a secret, countless copycat dishes that have been deemed close matches by tasters of the original are comprised of a smooth, rich, green sauce and an alluring golden-hued topper.

Here's how you can add your own interpretation of this elusive dish to the mix:

1. It all starts with fresh oysters -- a half-dozen per eater to start (or a dozen each if this dish and dessert are all you have planned for the evening). It’s best if the shells are significantly bowl-shaped so there’s room for their natural liquor to mix with the secret sauce.

You'll also need butter, garlic, and bread crumbs for the topping. And to make the sauce, you'll want a whole slew of greens -- I used parsley, celery leaves, green onions, spinach, and kale -- and the flavorings you desire (I like hot sauce for kick and anise-flavored liqueur to add a more complex flavor). 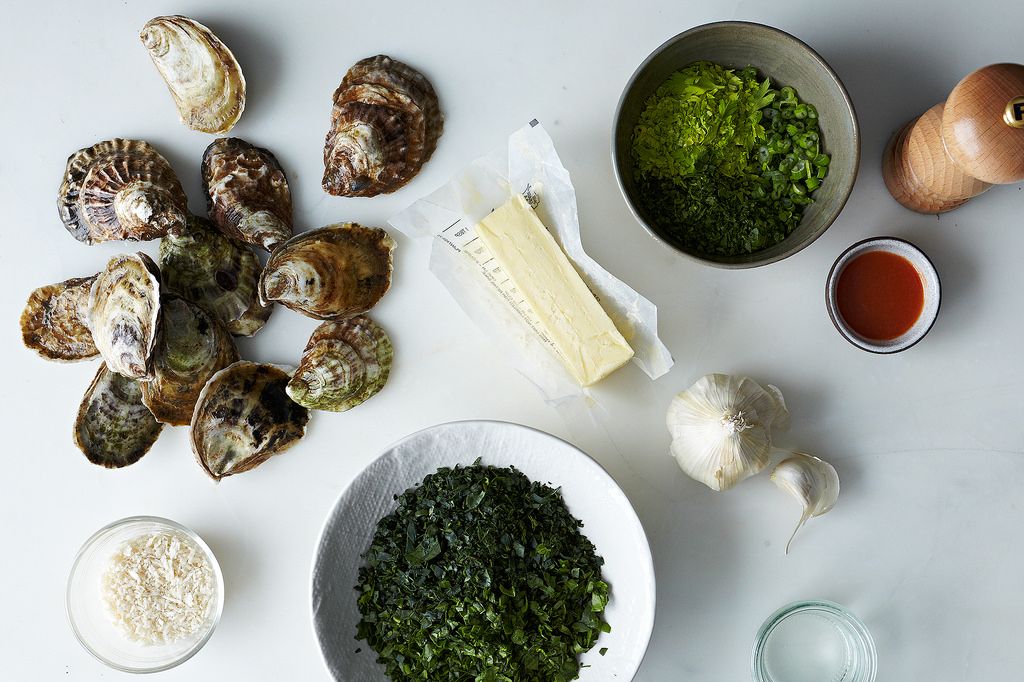 2. Shuck the oysters. Then, carefully nestle them into a bed of rock salt spread on a large baking sheet. Preheat your oven to 450° F and turn on the convection if you’ve got it. 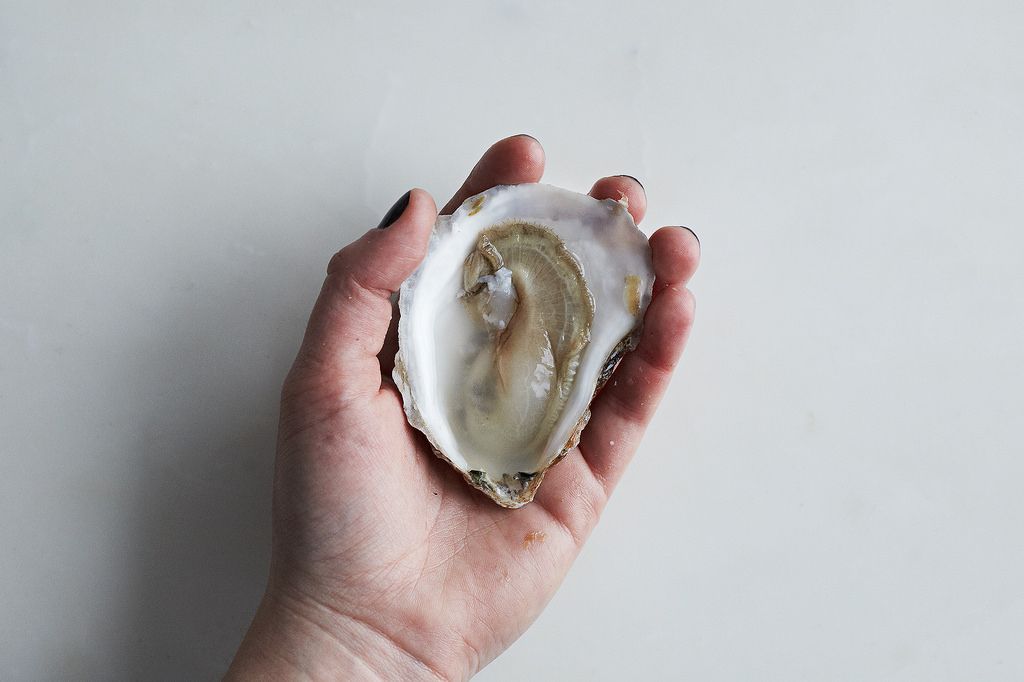 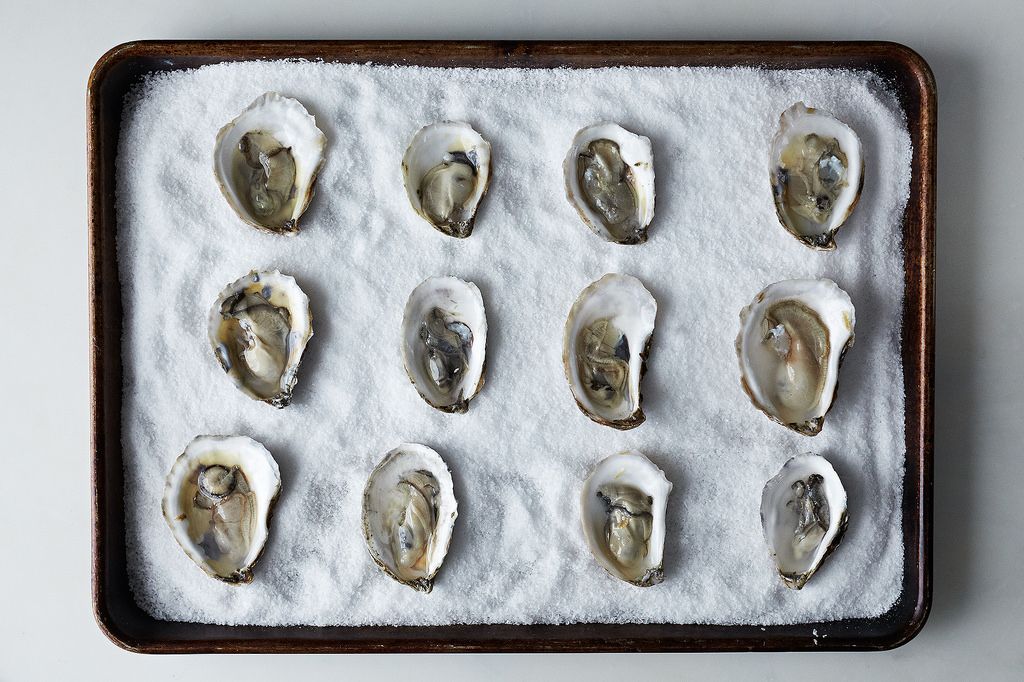 3. Melt a stick of butter per dozen oysters in a large skillet over medium heat. You'll use it to make both the butter base for the sauce and the tonic for the golden bread crumbs that top each oyster. Add 1 tablespoon of a minced allium of your choice (garlic, shallot, leek, onion, or chives) per dozen oysters. Cook, stirring frequently, until you just start to smell the allium. 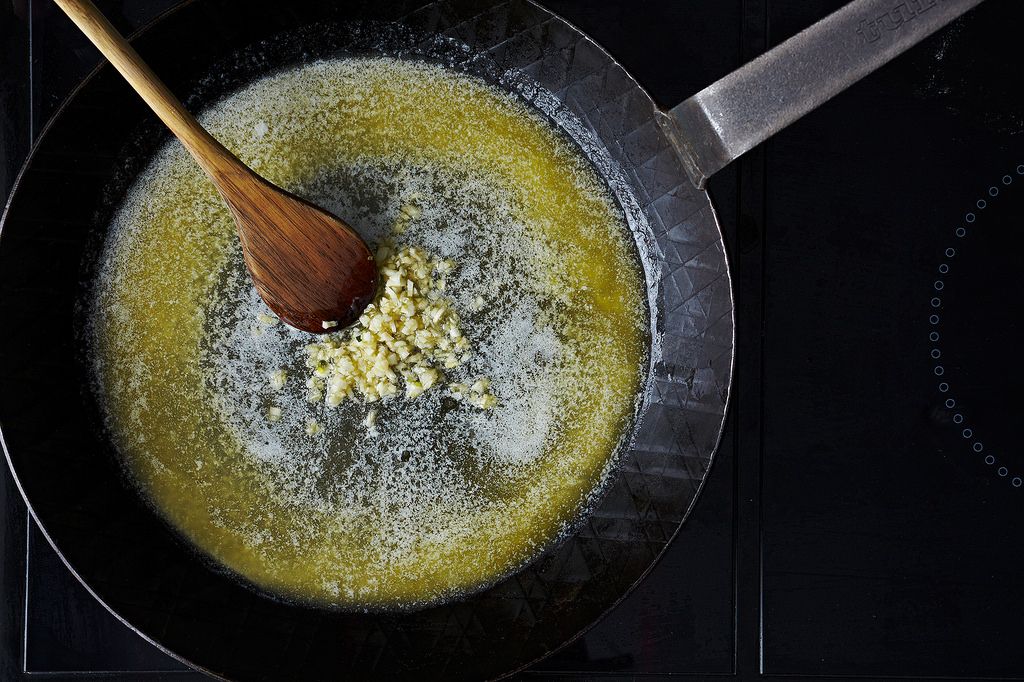 4. Mix the bread crumb topping. Remove the pan from the heat and take about a third of the flavored butter to moisten 1/4 cup of bread crumbs (fresh or panko work best) per dozen oysters. I also add a small amount of chopped fresh herbs (I like parsley) for freshness. 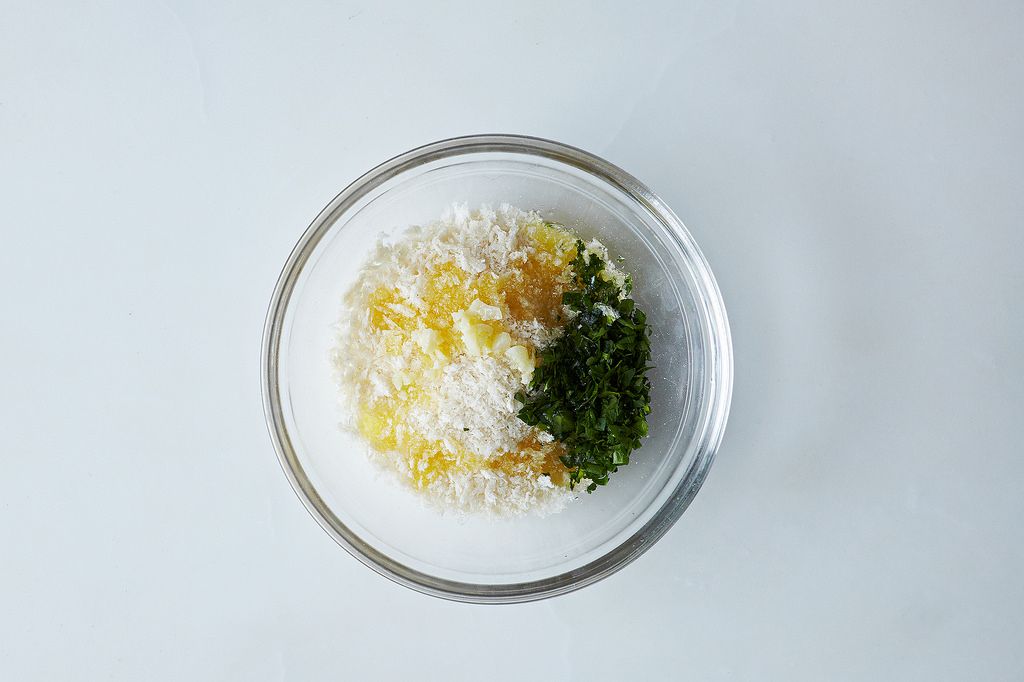 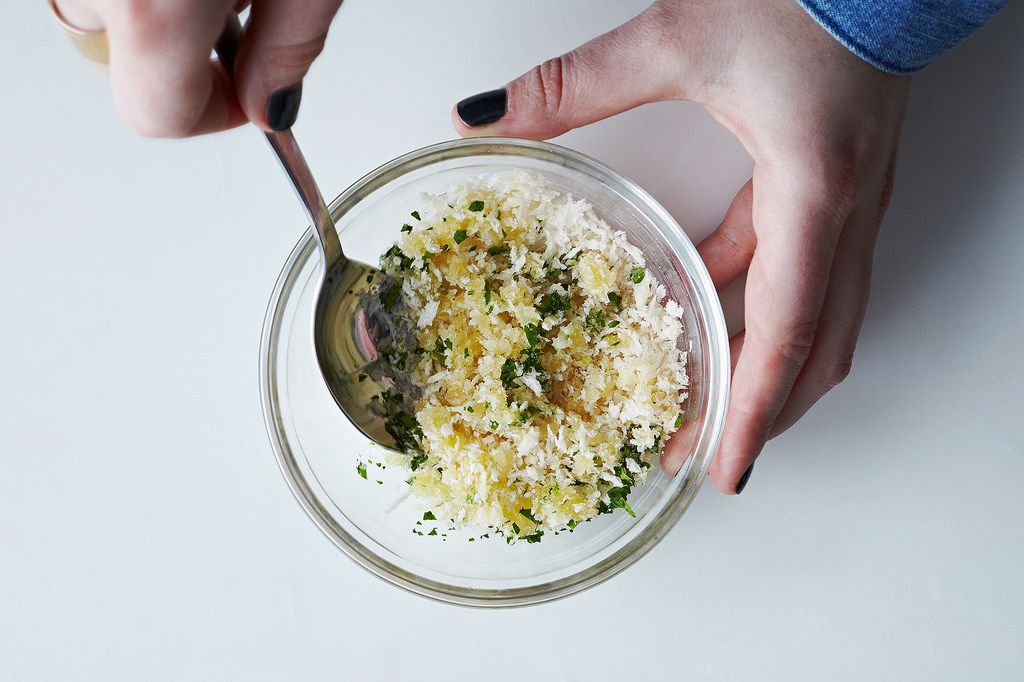 5. Make the secret green sauce. Put the skillet back over medium heat and for every 12 oysters, add 1/2 cup of finely chopped herbs. You'll want to use herbs that work best when they're softened with a little heat, like a mix of celery and parsley leaves and/or the green tops of scallions.

Sweat those for 2 minutes, then add 2 tablespoons of sweet wine or gentle liquor (I like Pernod or sambuca) per dozen oysters. 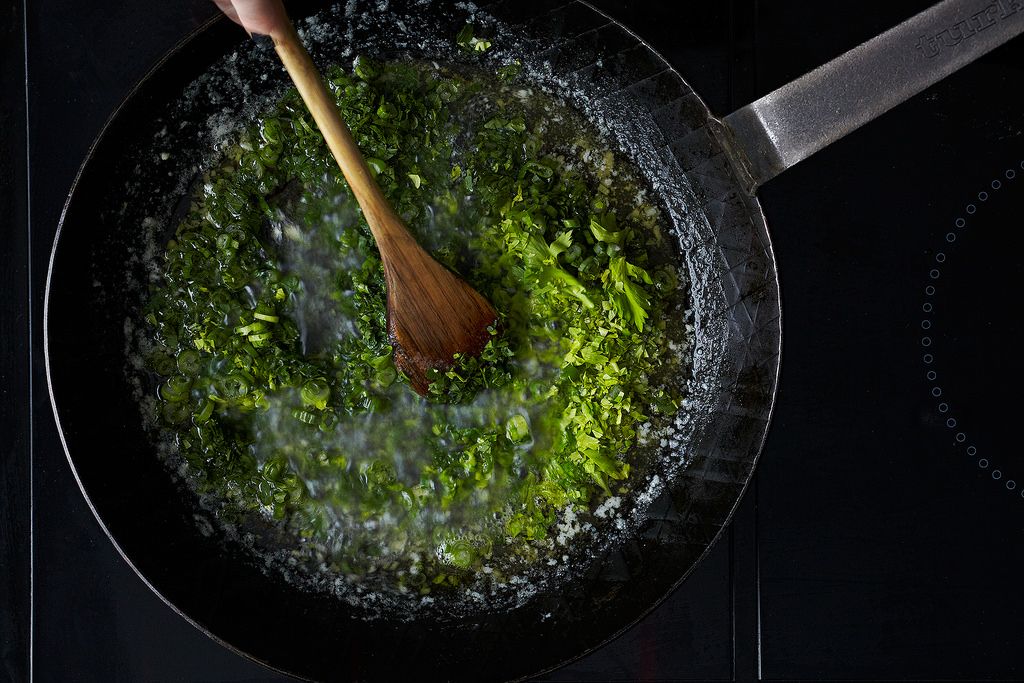 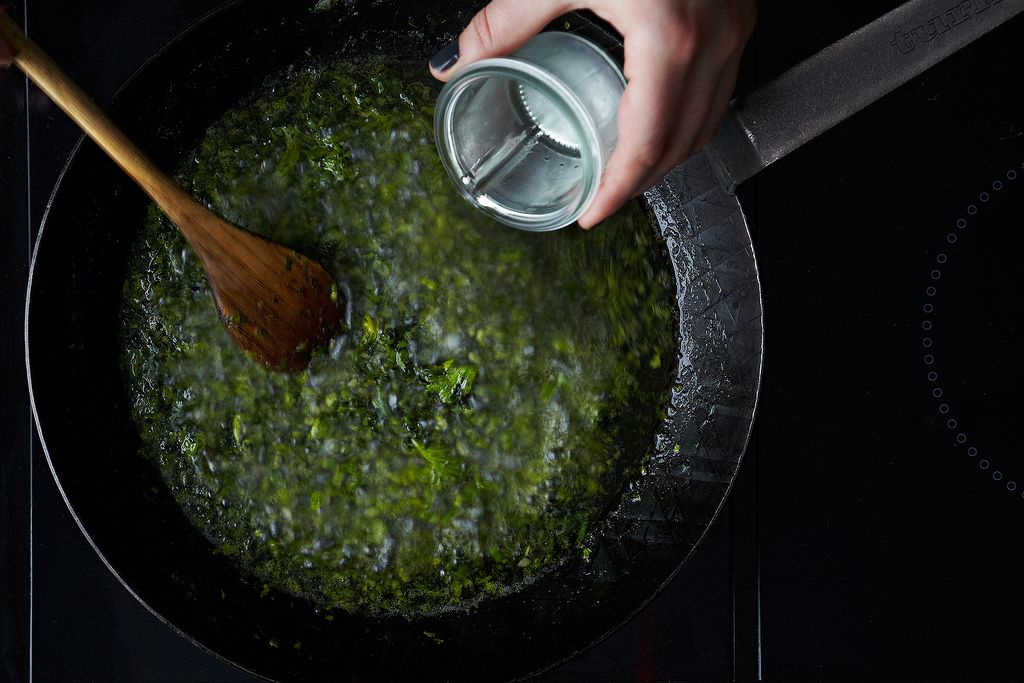 6. Add this cooked mixture to the bowl of a food processor along with another cup of mixed raw greens like spinach, kale, watercress, and/or arugula. Season with salt, pepper, and hot sauce, if you'd like. Process until you've got a green paste. 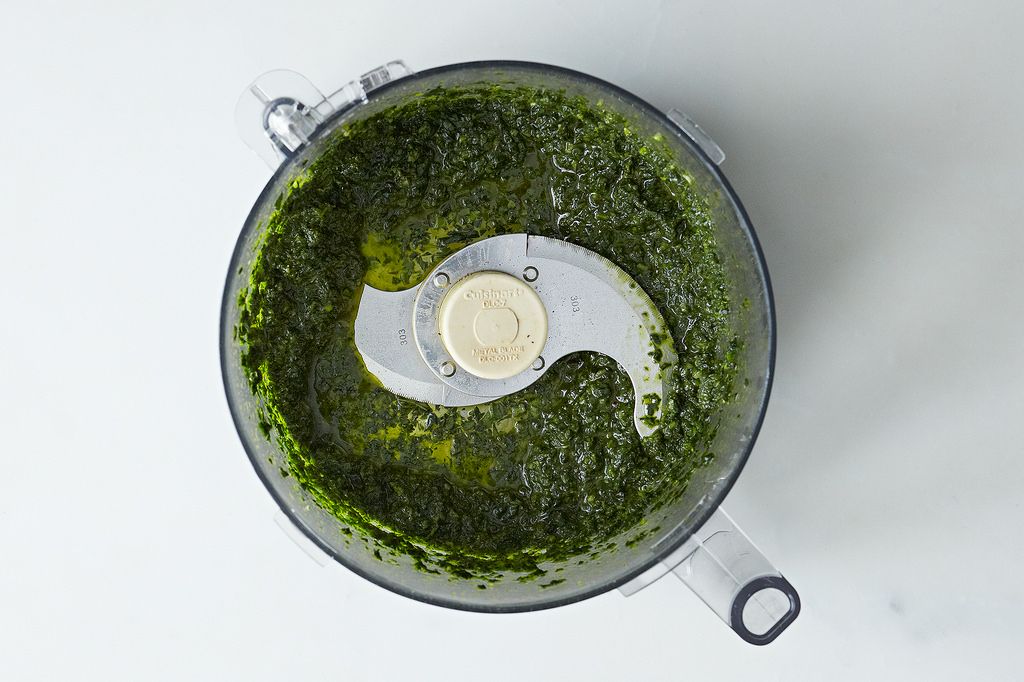 7. Top the shucked oysters with a heaping teaspoon of green mixture and a sprinkling of prepared bread crumbs. 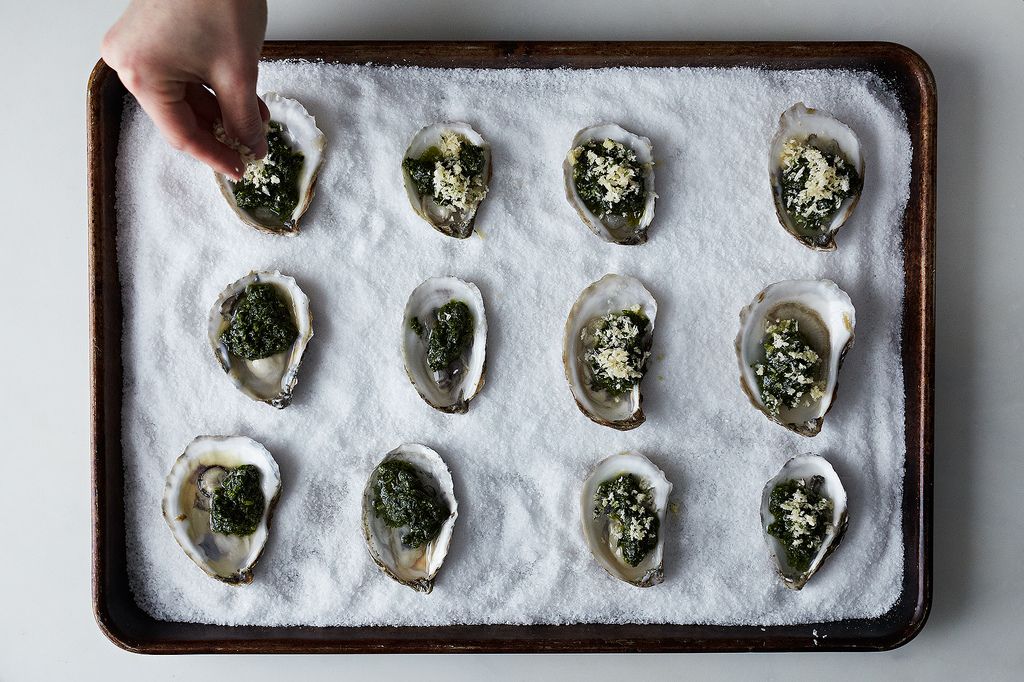 8. Bake the oysters for 10 to 12 minutes, until the sauce is bubbly and the bread crumbs are crisp. Serve to your valentine with lemon wedges. You’ll love the Oysters Rockefeller at first bite. Good luck on the aphrodisiac kicking in after that. 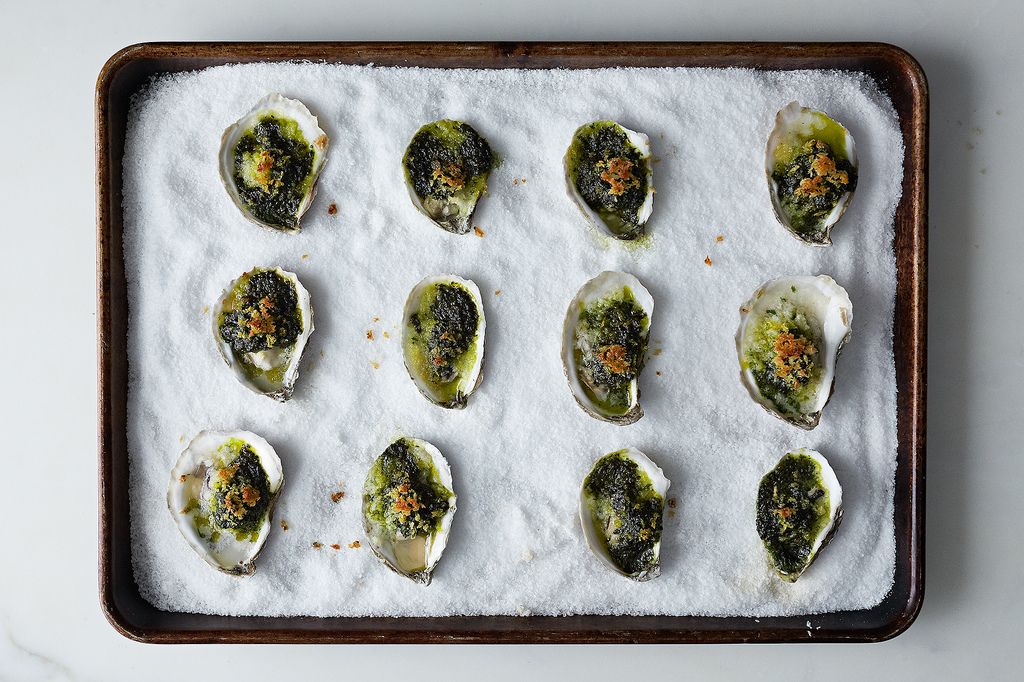 What are you serving this Valentine's Day? Share with us in the comments below!

Morningside H. August 7, 2017
I thought there was cheese in oysters rockefeller?

MIRIAM August 7, 2017
Why are the oysters baked on a bed of salt? Can you tell me how the salt affects the taste of the oysters, if at all. I plan on making Oysters Rockefeller as the first course for a dinner party over the Labor Day Weekend. It's a lovely recipe.

Mark S. August 7, 2017
The oysters are baked in salt to keep them level and from moving around on the sheet pan, otherwise the uneven bottoms of the oysters would cause them to tip over, spilling all the yummy goodness all over your sheet pan.

Marilyn L. February 22, 2016
Marilyn Flaherty, I love oysters and this recipe sounds fantastic so shall prepare it as soon as possible! I could eat at least a dozen- more if available- for breakfast! Thank you for the beautiful recipe!
Author Comment

cheese1227 February 22, 2016
May there be many breakfast oysters in your future!

amy F. January 27, 2016
I have never made oysters rockefeller before and your article intrigued me enough to go get 18 oysters for my family. I couldn't wait until Valentine's day. I followed your suggestions to the letter and they were delicious! I used garlic and panko bread crumbs. For the green sauce i tried Sambuca, parsley, celery leaves and the tops of green onions. Outstanding! I can't wait to try another variation.

Donna B. January 25, 2016
If you add a piece of canned chipotle pepper or a bit of the adobo sauce from the can on top of the oyster, you have oysters al diablo. Sooo good.

Jeff S. February 11, 2015
Hi Cheesey,
I am sorry that you did not grow up with Popeye. This recipe came from his trip to Goon Island after he saved his father, Pappy. He would ask you to try Oysters Popeye before you Commented. Olive Oil loves them and strong men too.
Author Comment

cheese1227 February 11, 2015
Nice allusion here. I do remember Popeye and Olive Oil from my childhood. I don't remember her liking the spinach though. I love spinach, just not canned spinach.

Jeff S. February 11, 2015
Let's do it the fast way >>> Oyster on the half shell, cover with CANNED spinach - About a tea spoon full, add a dash of garlic and butter, cover with paramagnet cheese - On high in micro-wave for 45 seconds.
Author Comment

cheese1227 February 11, 2015
That is one way to do it for sure. I've never been a fan of canned spinach, though. And I like the crispiness the broiler gives the dish, something a microwave can't replicate.

Amanda S. February 9, 2015
So thrilled to read this. Have always loved oysters Rockefeller but the green sauce mystified me -- until now! Thank you much!
Author Comment

cheese1227 February 10, 2015
Excellent! Glad the piece helped demystify the dish for you!