Food52's Two New Cookbooks! (& the Covers We Rejected Along the Way) 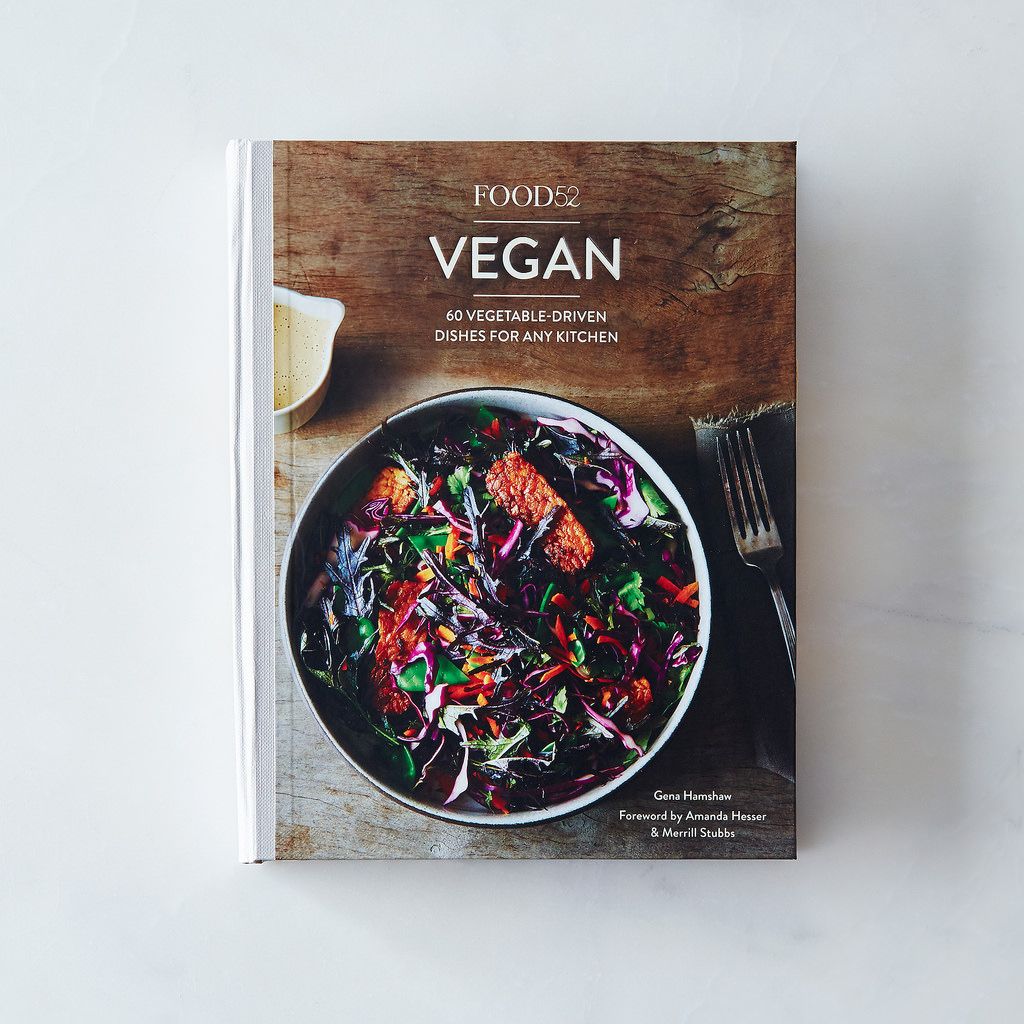 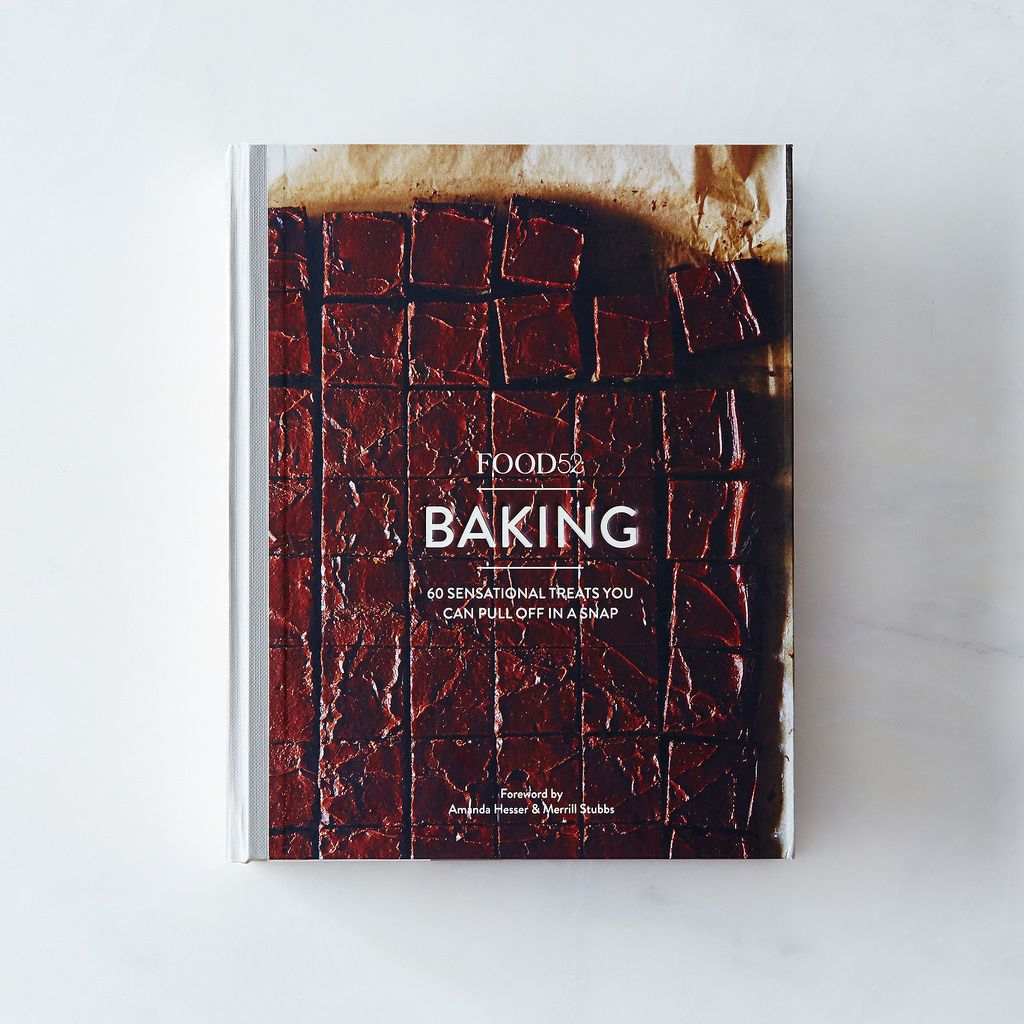 When you go to a bookstore, the first thing you see—the thing that makes you most excited to scoop a cookbook up, take it home, and cook with it—is the cover. But there were likely covers before that cover. In the case of our next two books, Vegan and Baking, there were a lot of covers.

Oops, are we getting ahead of ourselves? Breaking: We have two new books coming out this fall! And they're already available for preorder. They'll be smaller than Genius Recipes (60 recipes instead of 100—which we think is just right to dive deep into a single subject), but still full of favorite and all-new recipes, photography by James Ransom, and kitchen confidence tips. Think of these as trusty Food52-style handbooks on vegan cooking (written by New Veganism columnist Gena Hamshaw) and baking (written by the editors, with tons of contributions from all of you).

While we can't show you the insides of the book just yet (we haven't seen the books yet either—they're currently off being printed and bound), we can show you the final covers—and some of the ones that came before them. If we posted all of the cover options, this post would go on for way too long and you would start thinking about what to eat for lunch. So here are the pivotal ones and a little info about how we got to them and why we moved on. 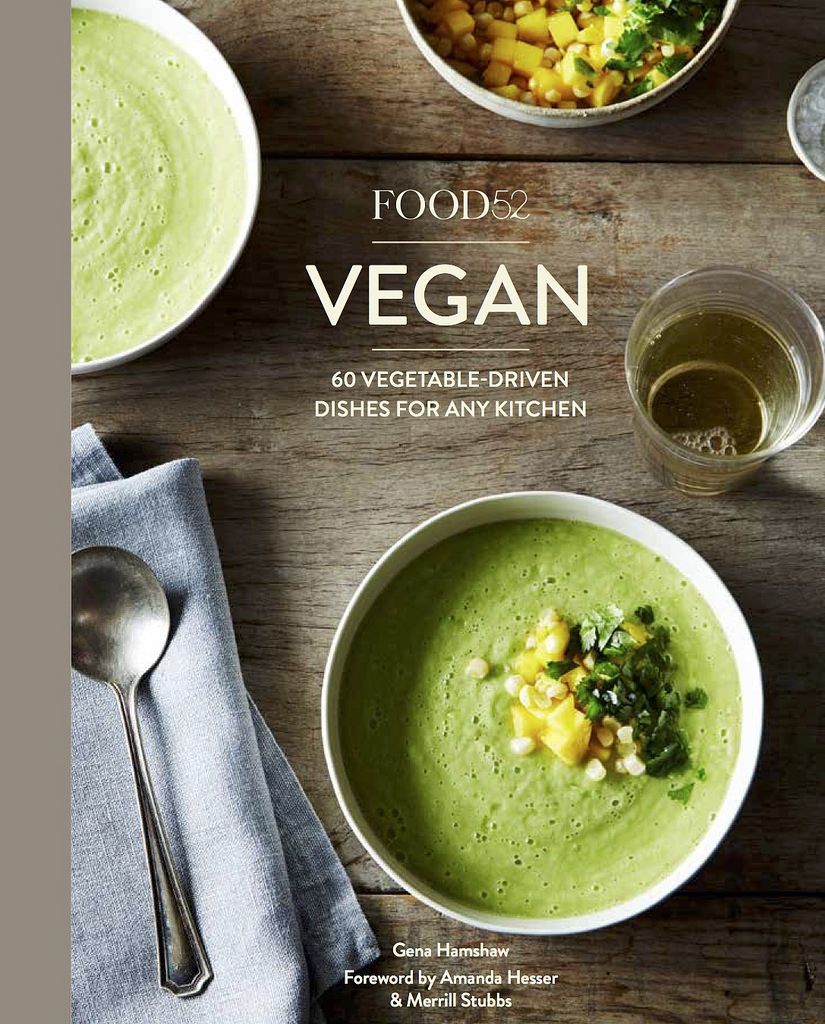 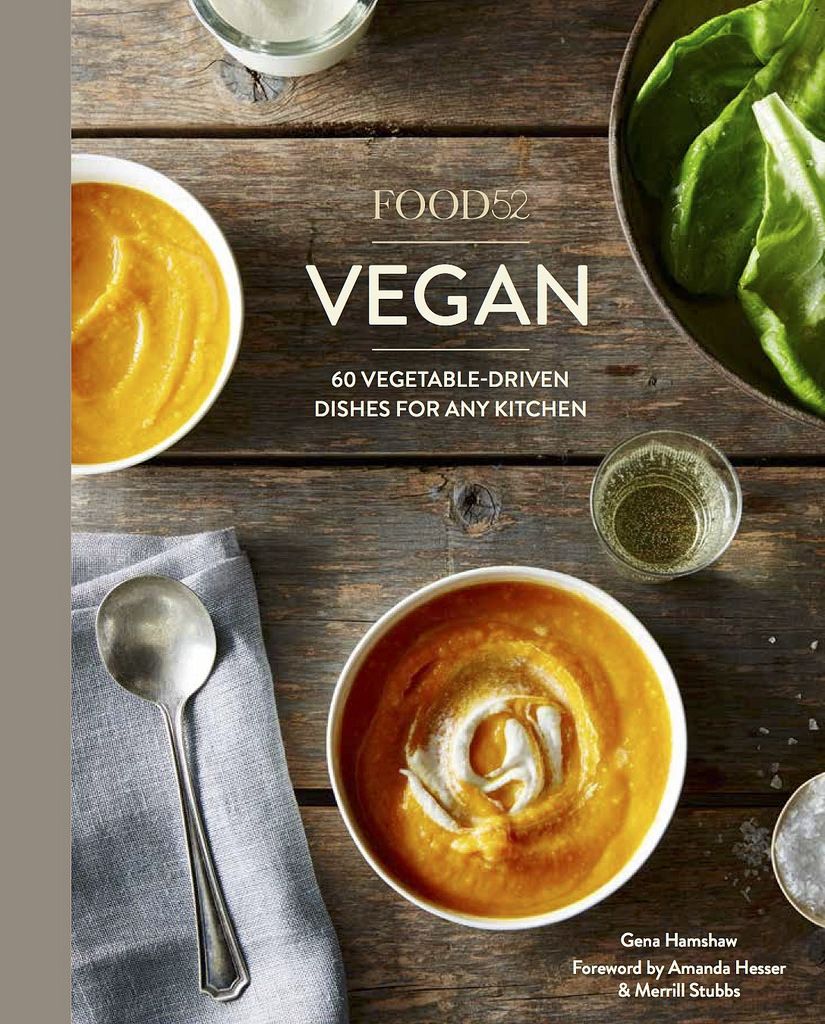 The first cover of Vegan had the Chilled Cucumber Soup with Mango Salsa. We and the team at Ten Speed Press, our publisher, both really liked the colors and the lightness of this image, and how one soup was ready to eat and the other was in the process of getting garnished. It felt like we were about to dive into a delicious meal—a meal we might have in summer. This book is being published in September, when fresh corn would be going out of season in North America and less available to many of our readers, so it wouldn't be a good idea to put it on the cover. Plus, a green soup might not look delicious to lots of people (though we can attest that this soup is delightful).

So, we tried to recreate the image with the Gingered Carrot Soup. Thing is, we had rented the wooden surface in the green soup image and couldn't get ahold of it again. The surface in the orange soup image wasn't quite right—it was a little too rustic for the story we wanted to tell in this book. We wanted to present vegan cooking as casual, but not crunchy. So we moved on—to something totally different (seatbelts on?). 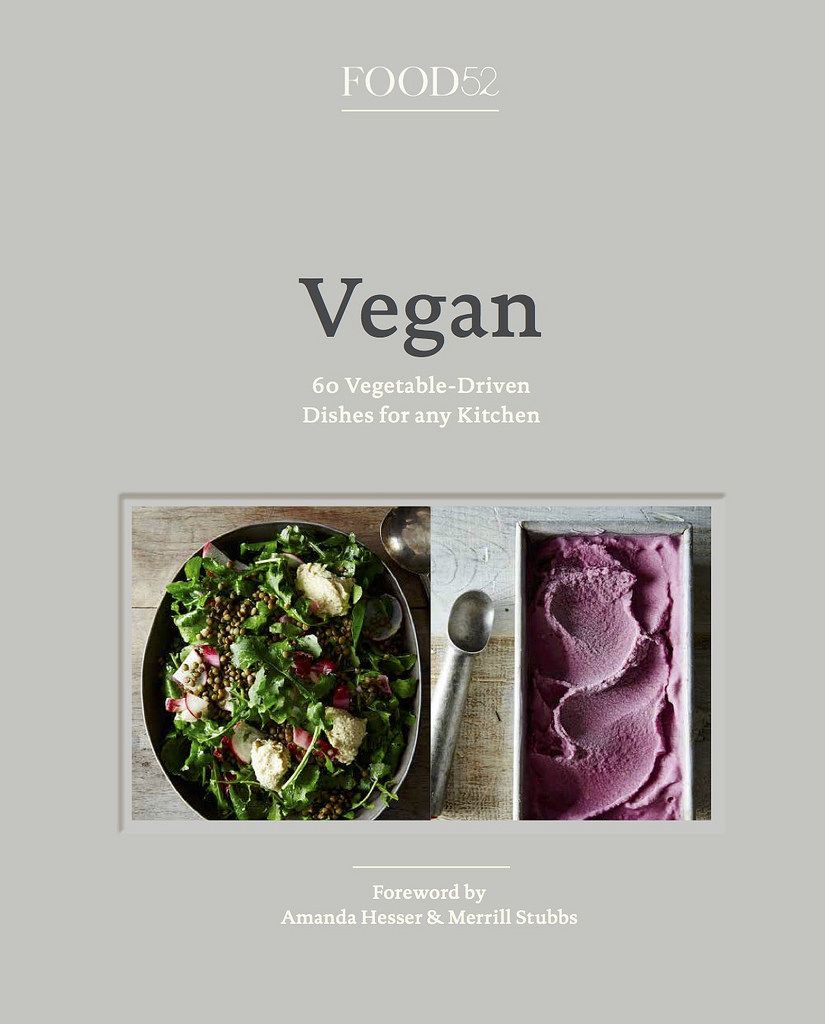 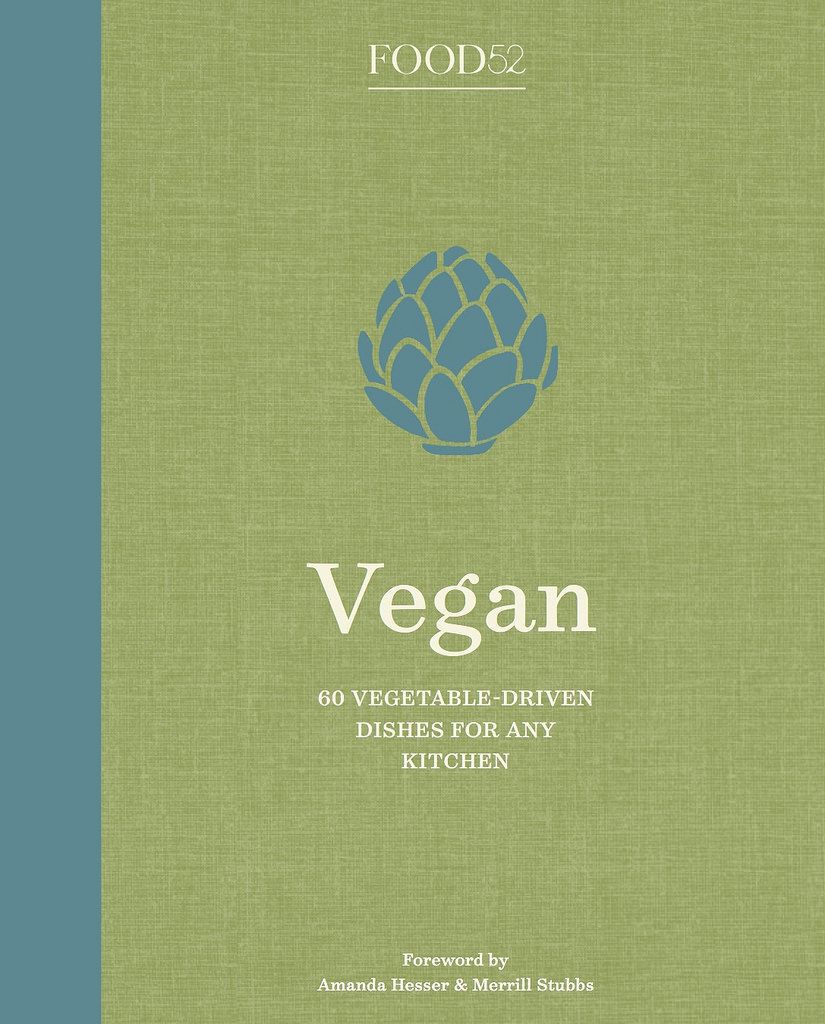 What if an image wasn't the majority of the cover? What if there were two tiny images, side by side, with a mostly cloth cover? The book would feel intimate, like an heirloom cookbook, which we liked, but these images weren't right. The two utensils "are mating," said Contributors Editor Sarah Jampel. And the food looked delicious, but not fun.

Then, we tried an all-cloth cover without any images. We're inspired by books like Canal House Cooks Every Day and Eat, which save the images for the inside and have cloth covers, but it didn't feel right for our books because photography is so much of what we do and we wanted the book covers to be more closely related to the Genius Recipes cover. So we moved on—to salad. Did you know we love salad? 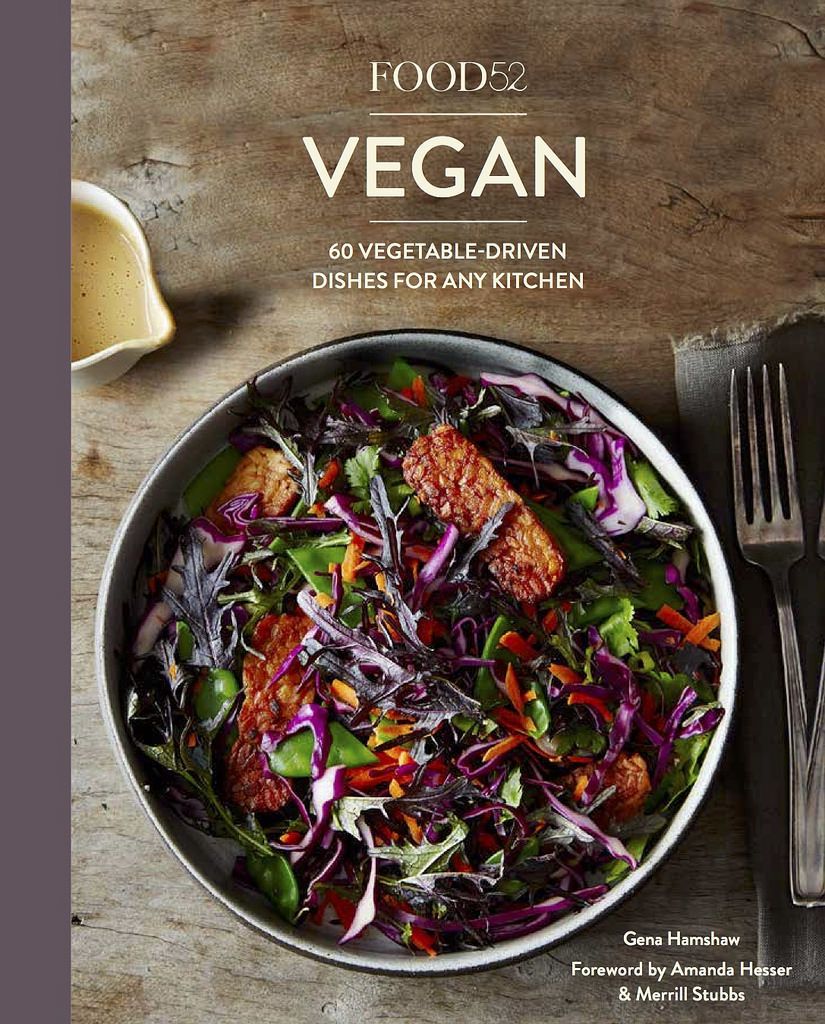 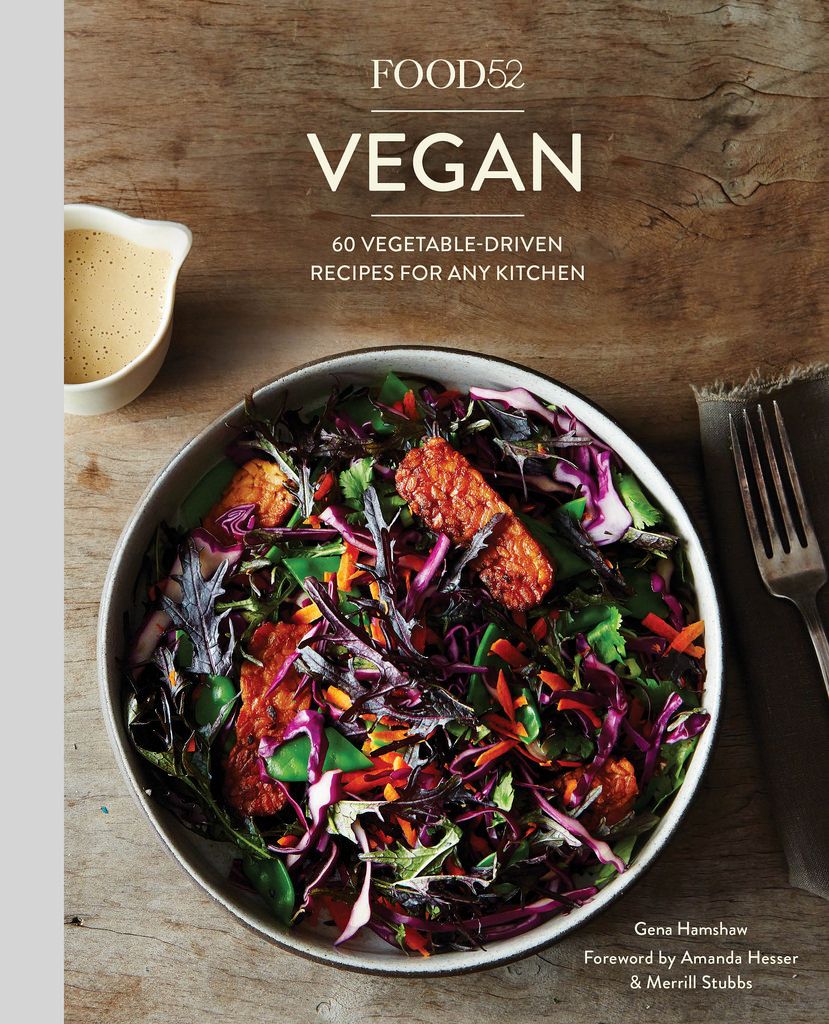 Was salad too obvious for a vegan book? How many salads aren't vegan? Then again, this Snow Pea, Cabbage, and Mizuna Salad with Tempeh Salad looks so good—we want to eat that whole bowl, slathered in creamy dressing. We don't want to share. And this is the feeling we wanted to get from the cover of Vegan. So the image stuck, but the purple spine had to go. We like muted colors, like cream and gray. So up there on the right is the final cover of Vegan by Gena Hamshaw (!!).

More: Be one of the first to get our new cookbook Vegan.

After eating lots of salad, there was dessert to look at: 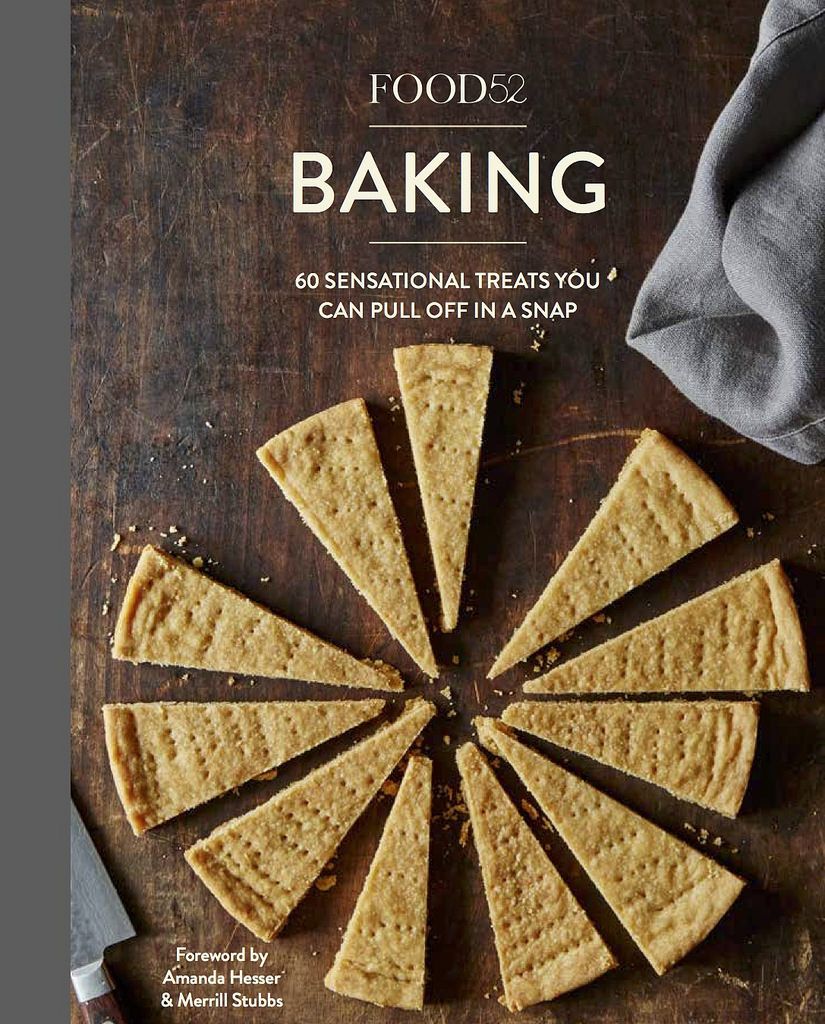 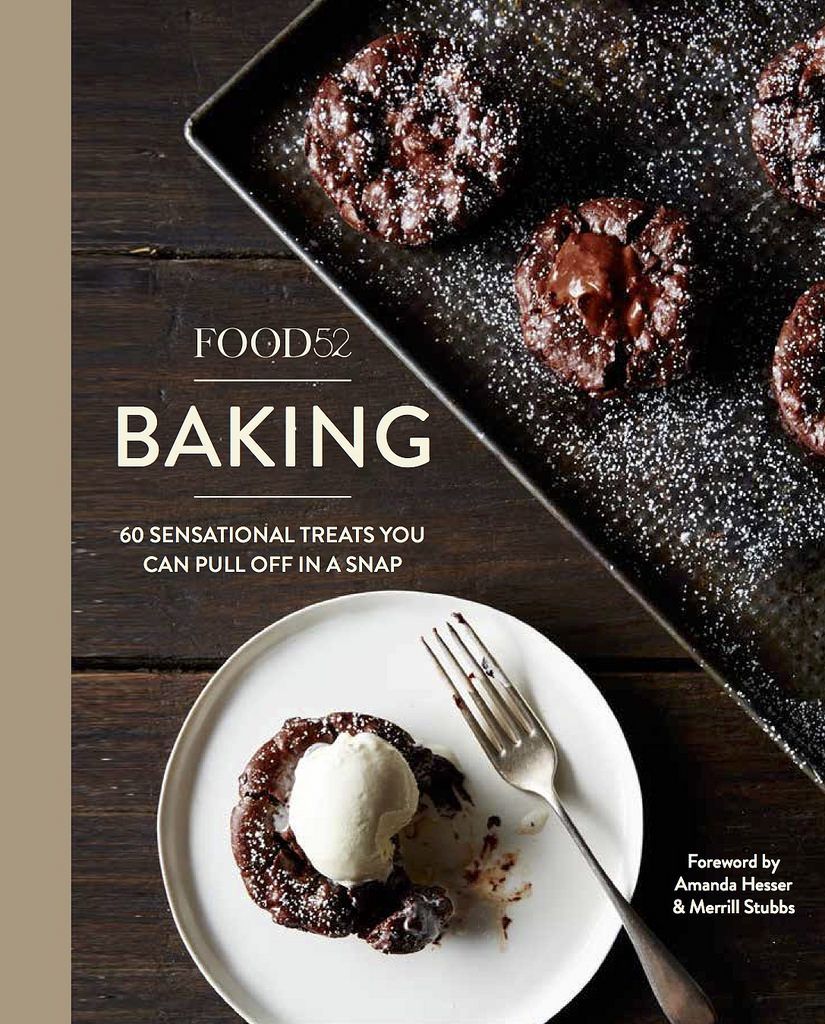 We started with Brown Sugar Shortbread on the cover of Baking. The shortbread pieces were graphic and alluring, but we wanted the cover to be luscious and crave-worthy, something like Phyllis Grant's Brown Butter Cupcake Brownies, which you see on the right. Aren't you jealous of whoever got to take that bite out of that ice-cream topped brownie? But we also wanted the cover to feature a recipe you could potentially make and eat every day. These brownies read more special occasion than afternoon tea, weekday dessert, or breakfast—though we wouldn't turn them down if offered on a Monday morning. 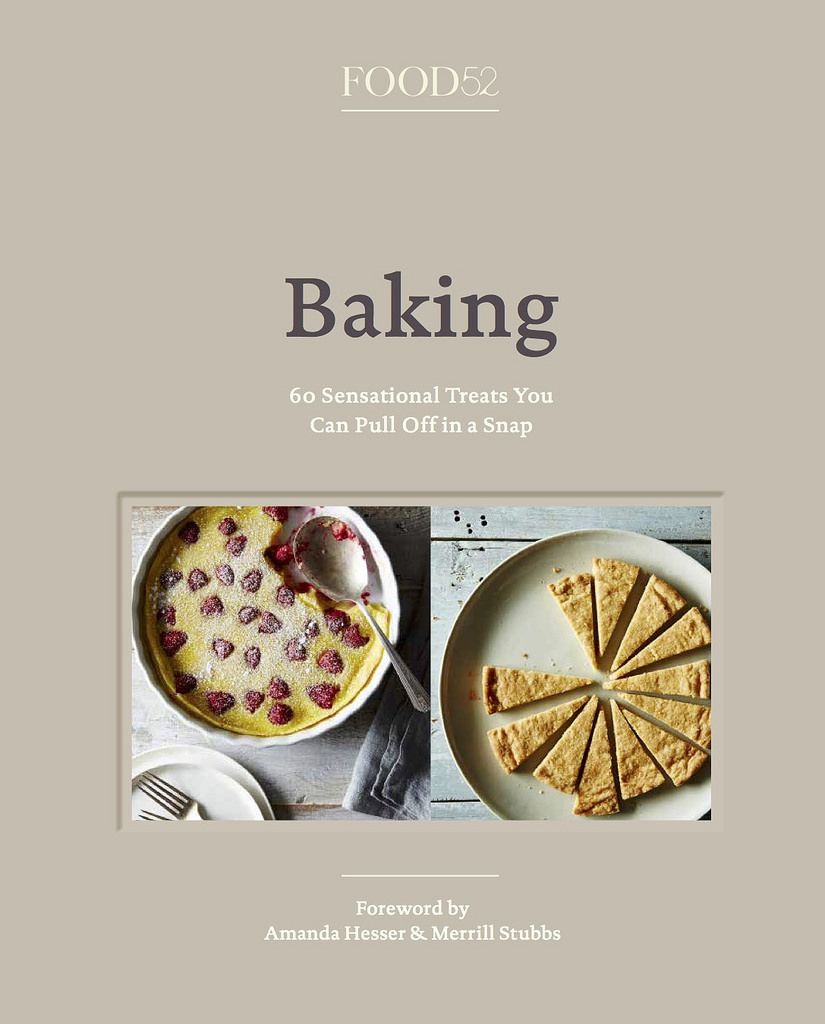 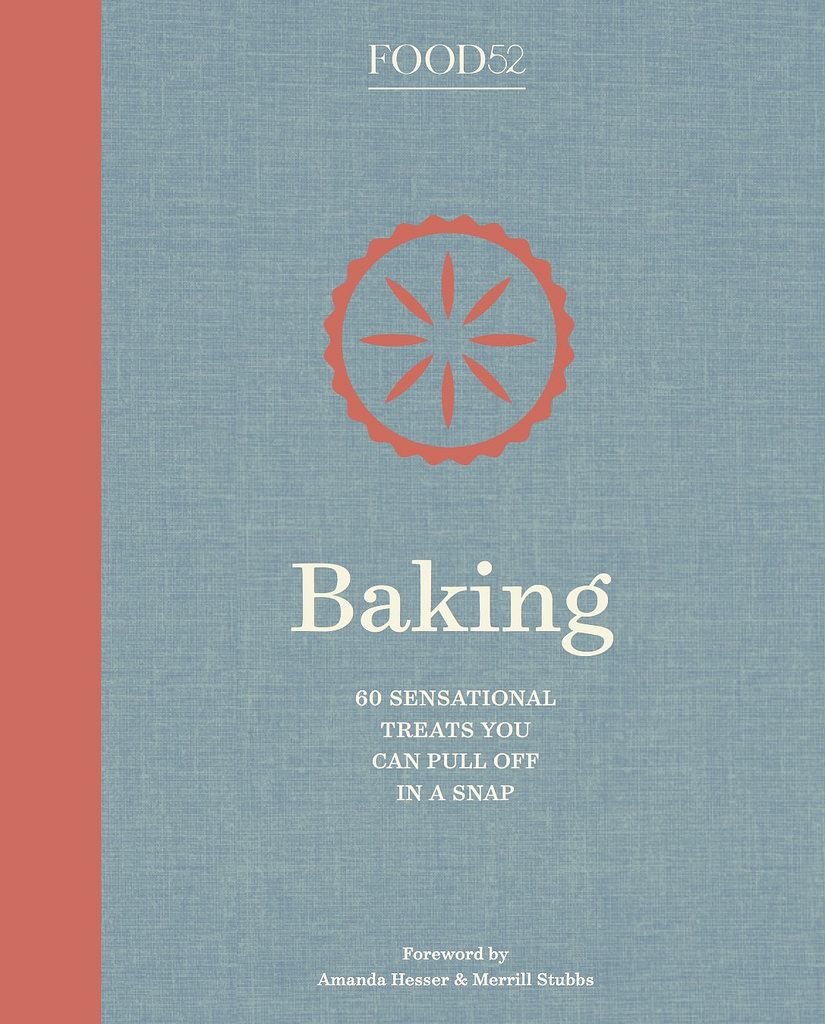 We tried the cloth iterations for Baking as well. We skipped past them, searching for something in-your-face scrumptious. 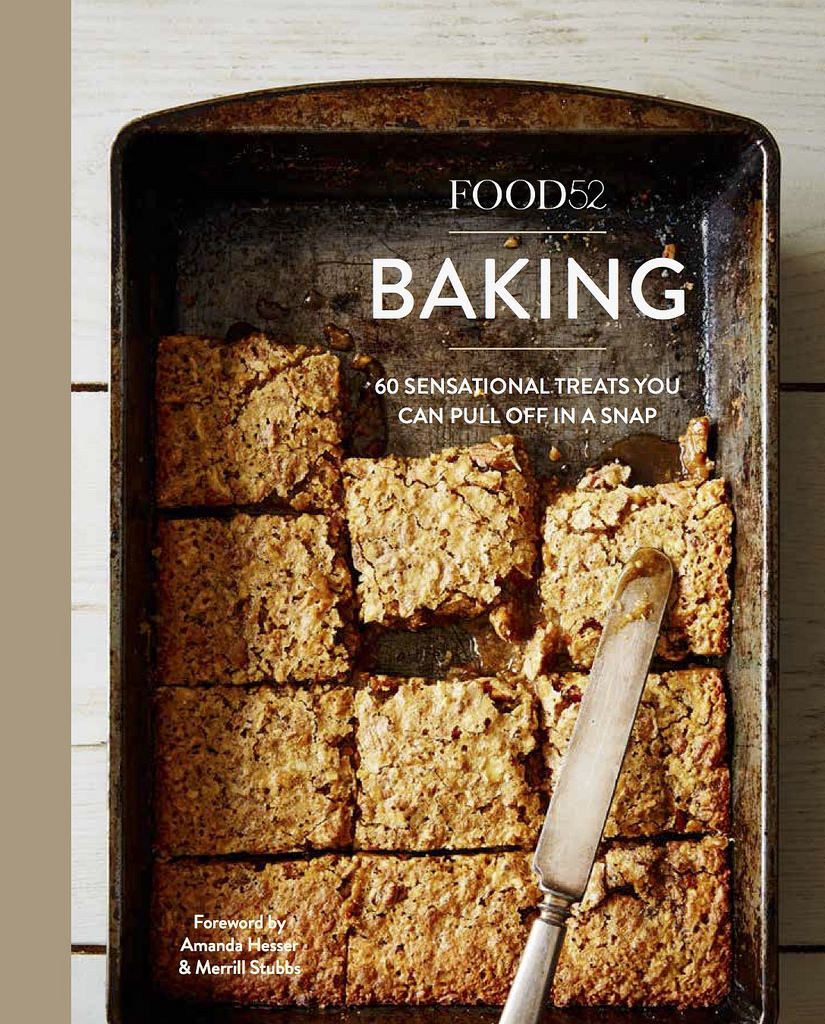 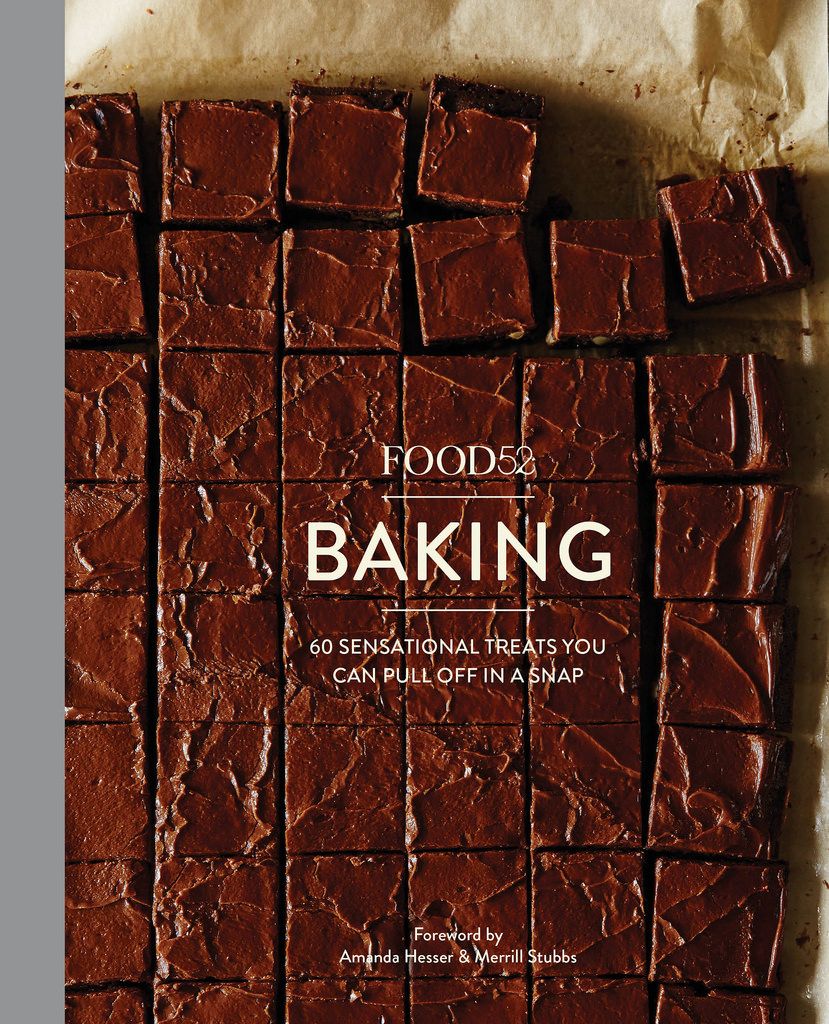 These Double-Layer Coconut Pecan Bars on the left had the right balance of weekday-friendly and luxurious, but the cover was looking very beige. And then, as if the answer was staring at us in the face the whole time, we found our dish: brownies. Brownies. Right.

Ta-da! You can preorder signed copies of both books in the Food52 Shop now and count down the days until September 22, when we'll send them to your doorstep. We'll be doing the same.

Would you have crowned a different cover the winner? Let us know in the comments!

Carol September 27, 2015
I love the Baking cover! I was interested in it right away, however the Vegan cover that grabbed me was the one with a lot of orange showing, on the right side of this site above. The napkin popped out with a beautiful spoon on top & an interested cup & the rustic table was easy to see. I wanted to sit at that table right away. Would like to see the spine of the book since that's what you see on your shelf at home. Good job on both selections!

Shelley S. September 7, 2015
All these comments just go to show that you can please some of the people some of the time but......! Personally I really dislike the Baking cover. It looks to me like a close up of a crocodile skin. The touch of a baking tray on the rejected brownie cover was just so "baking" and relatable and created diagonals that gave the cover great movement and eye appeal. And the Vegan cover is still so "granola". You can love veggies and not be a vegan. Tempeh, mizzuna...how trendy can you get? Where's the kale? Nonetheless, you can't (fortunately) judge a book by its cover. Hurray for weight measurements and, yes, a ribbon book mark is always welcome. Can't wait to see them in the flesh (?) paper!!

Sara S. August 18, 2015
I personally love the Baking cover with the crumbly Brown Sugar Shortbread on the rustic wood board, with the gray spine picking up the gray in the cloth on the right. But it's what inside that really matters, and I have pre-ordered the book!

Lea August 18, 2015
The final choice on the Vegan cover is stunning. But the brown butter cupcakes on the Baking book would have been my choice. I think the brownies picture is...boring. doesn't make me wanna take a bite. All the same, I still want both of them, and I'm not vegan! But I'm more like the wild/whole food so fresh and veggies are a huge part. Mmmm....

Anja August 18, 2015
Metric measurements are nice but that is not the same as weight/mass measurements, which is what was asked. Do the recies have weight measurements?

Rosie August 8, 2015
MelissaH, I came to the comments specifically to ask that same question! It drives me absolutely bonkers the way American baking websites and books hardly ever include weight measurements. The rest of the world considers scales one of the most basic kitchen tools, and measuring things by weight is the ONLY way to get a consistent outcome with baking.

So I'm glad to hear that this book uses them. Sarah Jampel, could you just clarify whether *every* recipe in the baking book has weights?

Alexandra H. May 29, 2015
Thanks for sharing this! I could read for days about the all they details of the cookbook process! Fascinating!

Bevi May 29, 2015
The chosen layouts remind me of the Time Life The Good Cook series. Are there attached ribbon markers in the books?

jenniebgood May 30, 2015
I was thinking the same thing! Nice choices.

AntoniaJames May 29, 2015
The Baking Book's cover appeals to me so much, far more than any of the other options.

I prefer the purple binding on the vegan cookbook much more, as well as the placement of the dressing jug to point toward the salad itself. That purple seems almost an iconic color within the Food52 brand. The lighter binding blends in too much with the bottom left portion of the photograph, making the binding ineffective as a frame. At the very least, I would have chosen a more saturated neutral to avoid that.

As noted above, I would also have turned the jug toward the salad. Those bright, fresh colors and the various textures of the food, not the title, tell me to buy that book. ;o)

Melina H. June 1, 2015
i completely agree. that pour spout with its creamy-frothy dressing pointing to the salad was such a nice touch. funny how a minor change can produce more (or less) "oooooh". i wonder what was your consideration here, as you all obviously put so much time into making the proper decision.

i also agree with that lovely purple binding preference. it would have been more unique to us food52ers! oh well… perhaps in the next edition…. :)

Sherri J. August 25, 2015
As a professional photographer, I agree wholeheartedly with the final choice of the vegan cookbook cover. The pointed cup turned toward the salad is static and boring, as is the nearly straight fork. The final image with the pour spout facing upwards at an angle is dynamic, adds tension, and interest - as does the sharper angle of the fork to the right of the salad. This is why, when doing portrait photography, good professional photographers pose subjects to create body angles. As for the baking cover, I personally find the brownie cover boring. The coconut bars in the old pan is both lovlier and more interesting. Either way, I'm sure that the recipes will rock. I have already made the cashew cheese for the lentil salad from a separate post. Haven't made the actual salad yet but if I keep nibbling on the delicious cashew cheese, there will be no need.

MelissaH May 29, 2015
For me, what matters most about a cookbook cover is whether I can distinguish it from all my other cookbooks simply by looking at the spine!
Does the baking book include mass measurements for all recipes? Not having them would be a deal-breaker for me, especially in a baking book.

Sarah J. May 29, 2015
Yes, the baking book does include metric measurements!