Today: The story of a brother (and father) who bakes, never gives up, and hits it out of the park with his waffles. 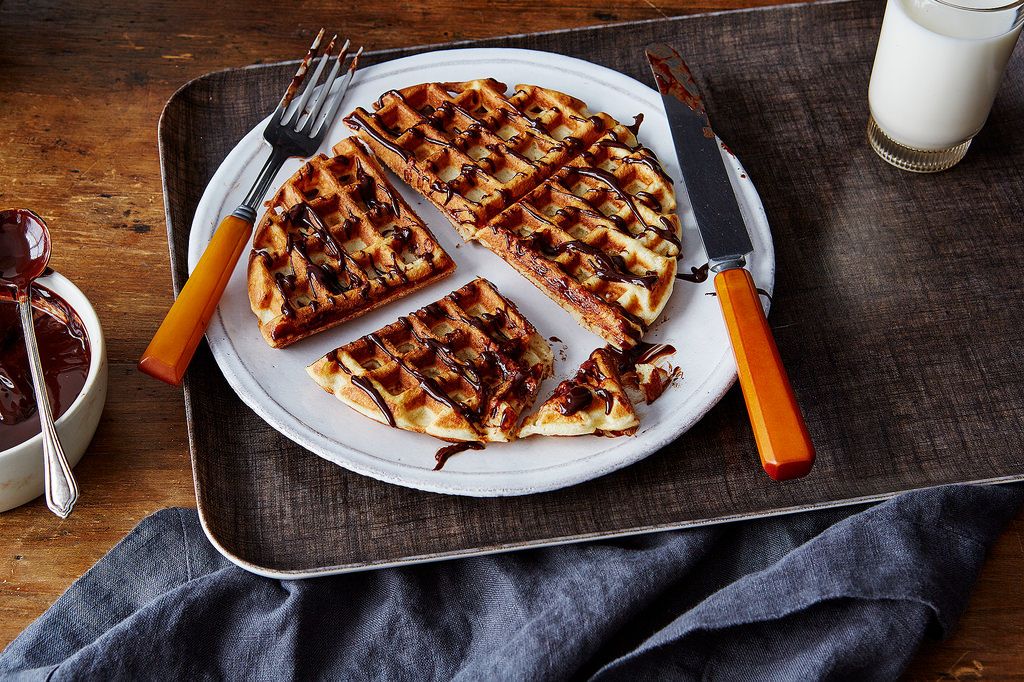 Growing up, my brother, Dean, never displayed much interest in cooking. He picked blueberries and went crabbing, and like many teenage boys, he plowed through food in the fridge—but you wouldn't find him at the stove. That was our mother's domain.

After he had his two daughters, though, something changed. He'd mention baking a cake here or there. He grilled. He smoked. He cooked weekend breakfasts. He even started making beer. Dean is affable and chatty—he likes an activity that brings him to the center of the house where people are passing through. He works a ton, running car dealerships, so cooking, he says, is his connection to the house.

Dean and I share two intractable family traits: perfectionism and impatience. Sometimes, these two don't mix well in the kitchen. Like the time he fried chicken outside in one of those large pots designed for frying a whole turkey. He and his wife, Leslie, had friends over to watch a football game and make dinner. Dean set up the turkey fryer outside, and to speed up heating the oil, he put the lid on the pot. Then he went inside to watch the game with his buddies, while Leslie and a friend headed out on a quick errand. 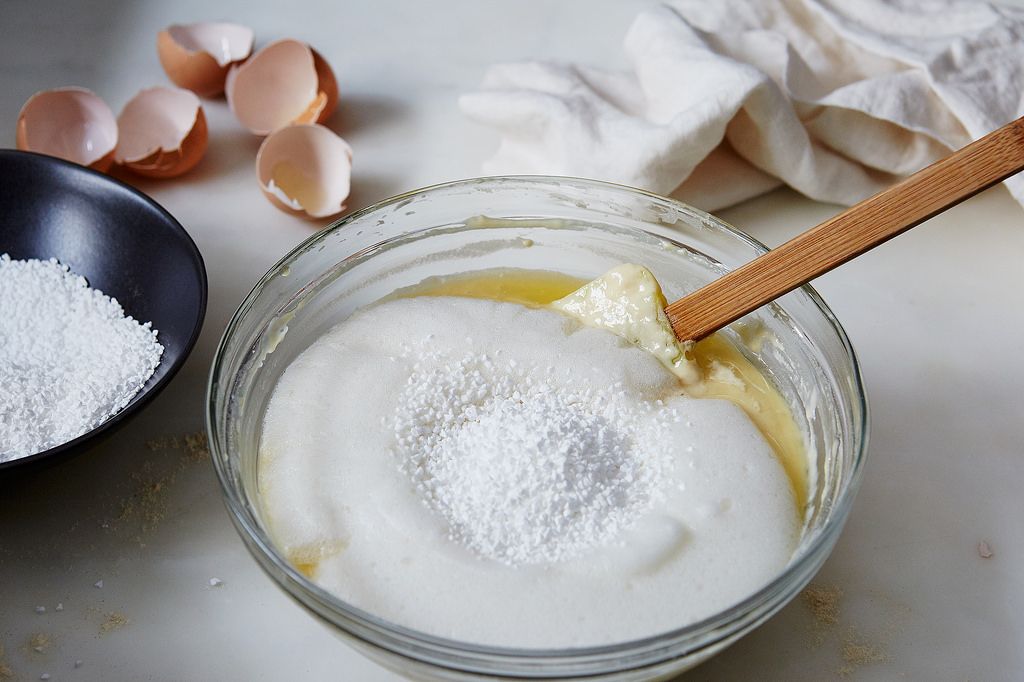 There was beer involved, and Dean forgot about the oil. When he finally went out to check on it, smoke was leaking from the pot. Dean quickly shut off the heat and decided to let it cool. A few minutes later, thinking it had cooled enough to check, he lifted the lid. Exposed to oxygen, the molten oil ignited, sending a column of fire into the air. Frightened, and maybe a little under the influence, Dean slid the lid back on the pot and went back inside to let it further cool. A few minutes later, he produced another column of fire. Twenty minutes later, he said, "I thought, you know what, I'll take it up in the woods. We had a nice little area with a hammock. There's dirt; it's nice and soft."

"We dumped the oil, turned our backs, and it just self-ignited. That's when Leslie pulls up. There's smoke and fire and there are kids crying. Total chaos. I guess we might not be frying anymore."

At this point, most people would call it a day and go get take-out. But not Dean; he's not a quitter. He scrubbed the pan, ran to the grocery store for another chicken and fresh oil, and he fried the chicken, goddammit. They ate at 10:30 P.M. 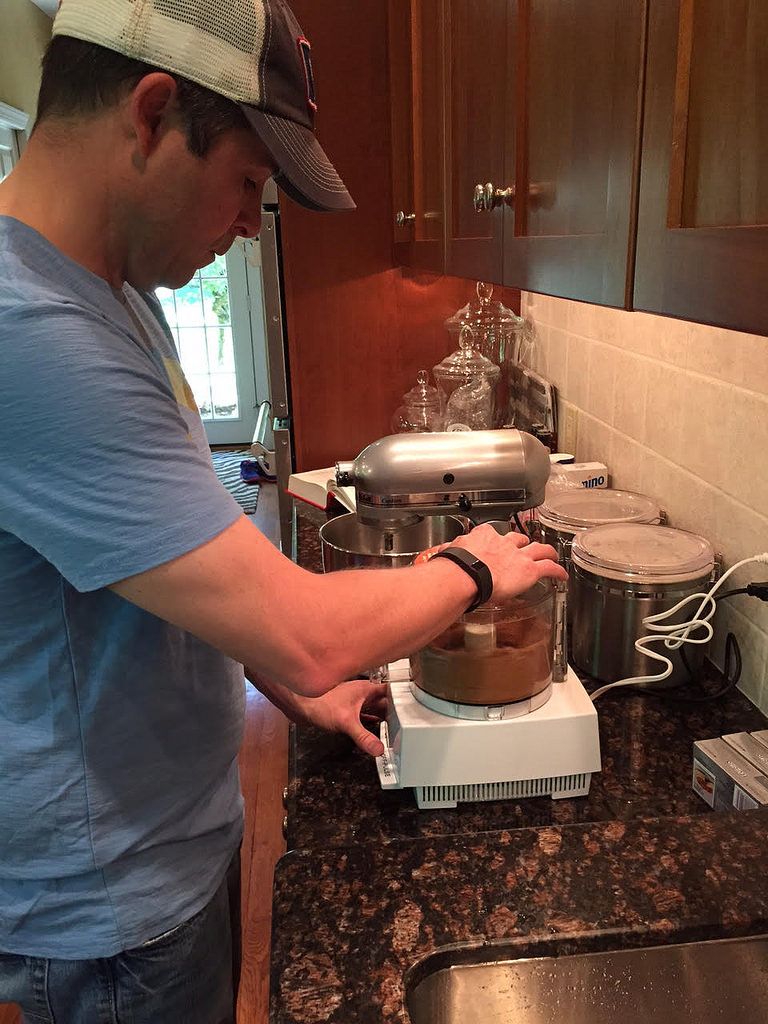 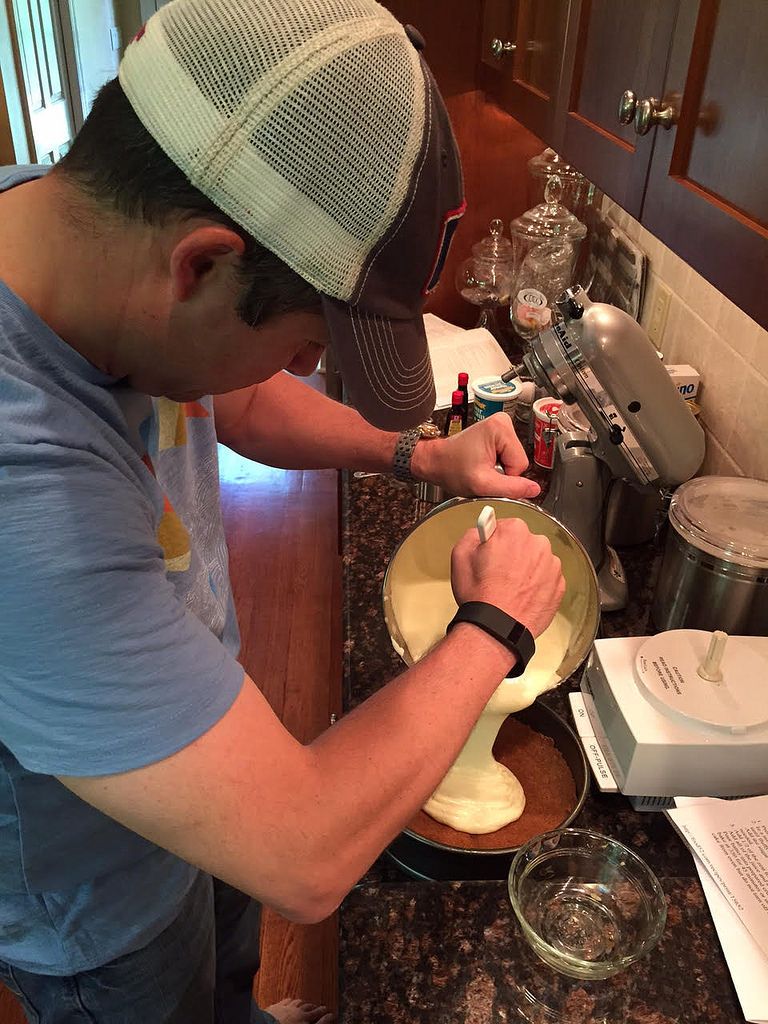 Amanda's brother Dean, hard at work on a cheesecake.

As any cook knows, even recipes you've made a million times sometimes vex you. Another time, Dean set out to bake a Dump-It Cake for his daughter Riley's birthday.

After baking the cake, you're supposed to let it cool completely before cutting it into two layers. But it was late, 11 P.M. "So I cut the cake," Dean said, "and when I went to flip it, I ended up launching it across the kitchen. It ends up on the floor and in the process of trying to pick it up I end up kicking it." This time, he insists, beer was not involved.

Undeterred, Dean assembled the ingredients for another batch. He got it into the oven by 1 A.M, then kicked back on the sofa to watch TV. "The buzzer goes off," he said. "I take it out and put it on the counter. I look over and there's the sour milk"—a primary ingredient—"on the counter." 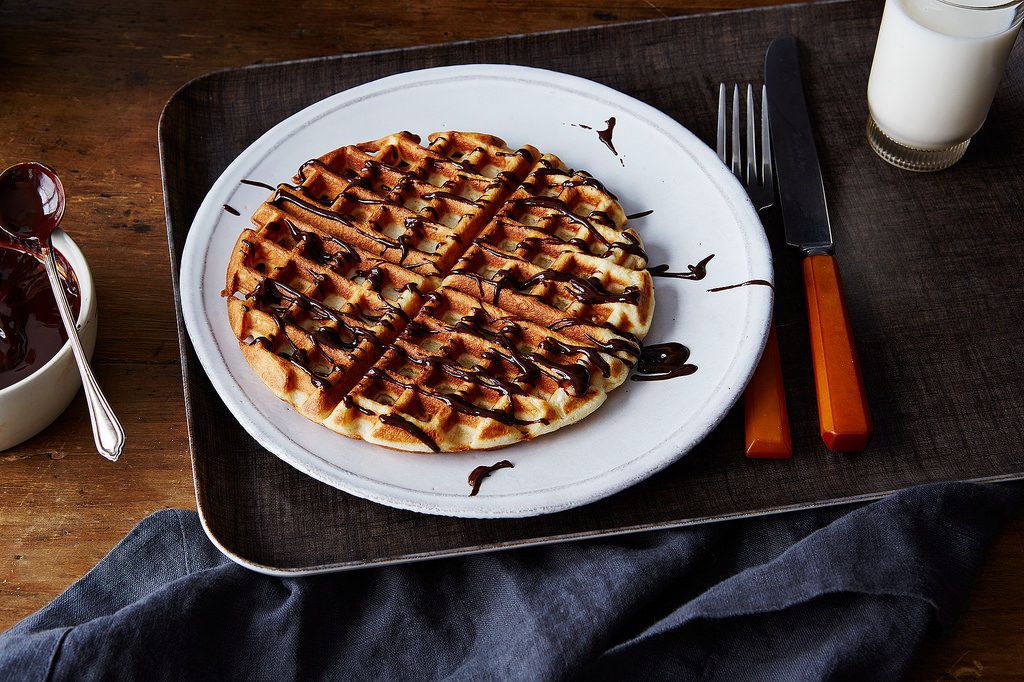 Third time was the charm. For the cake. The first batch of icing seized up. The second batch failed to cover the cake. A third batch was made. (Perseverance is vital to becoming a better cook; you may not need to take it quite as far as Dean does, but kudos to him for going the extra mile -- or three! -- for his daughter's birthday.)

He went to bed at 5 A.M., then got up for work. "I didn't tell anyone about the ordeal, but Leslie opened the garbage and it was like a cake massacre."

Between his moments of extreme cooking, Dean has become an accomplished cook and baker over the years. When I called him recently to make sure I got the cake debacle facts straight, we got to chatting about what else he bakes, and my jaw dropped at just how many recipes he listed off the top of his head, among them: Meyer lemon cheesecake, traditional cheesecake, Nigella Lawson's Guinness cake, apple pie, flourless chocolate torte, chocolate espresso cookies, chocolate bark, strawberry shortcake, and Ski Shack Waffles (a recipe he perfected after many trips to Killington). "I'm not a muffin guy," he said.

"I just kind of dabble, but everyone knows me as the baker. Baking isn't sexy. It's not like smoking a prime rib." Or burning down your woods with hot oil.

Rhonda35 June 22, 2015
Love this piece and love our brother! Glad to see he's gotten waffles down...do you remember the Christmas his blueberry waffles exploded all over my white-cabineted kitchen, Amanda?

Chaya R. June 21, 2015
i love this article! i'm in the process of teaching my brother how to cook. we made scones together, and then he made ina garten's pancakes. alone! i was so proud. i'm sending him this!

LauriL June 20, 2015
Hysterical story! Perserverance is key and I'll not walk away from my waffle iron.

AntoniaJames June 19, 2015
What a wonderful story! I make waffles a lot on the weekend for my sweetie of 35+ years. Next time, there definitely will be chocolate involved. (Using Alice Medrich's no-recipe rubric, of course.) ;o)