Genius Greek Yogurt Whipped Cream for All Your Summer Desserts

Today: The secret to lighter (and tangier) whipped cream. 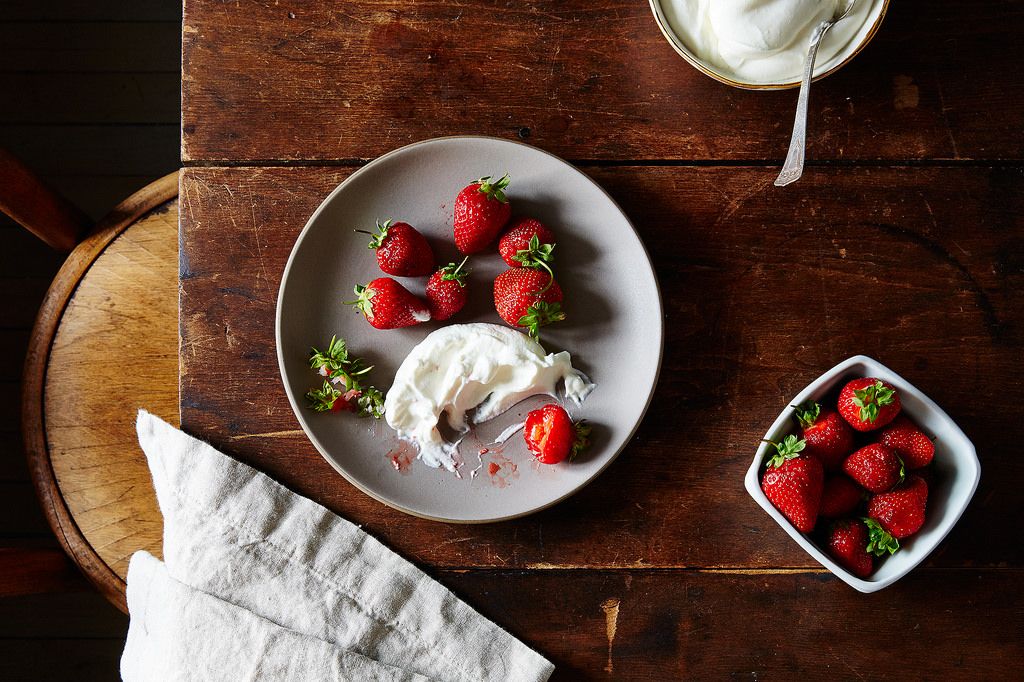 When you grow up and your taste buds fully form, the first thing to go is the Cool Whip.

The benefits of real, freshly whipped cream become impossible to ignore—the clean milky-sweetness; the way you can drop a spoonful weightlessly onto a hot piece of pie and watch it start to melt. (Nobody would mistake Cool Whip—which little-girl me was shocked to learn is made of hydrogenated vegetable oil and no cream—for weightless or clean.) 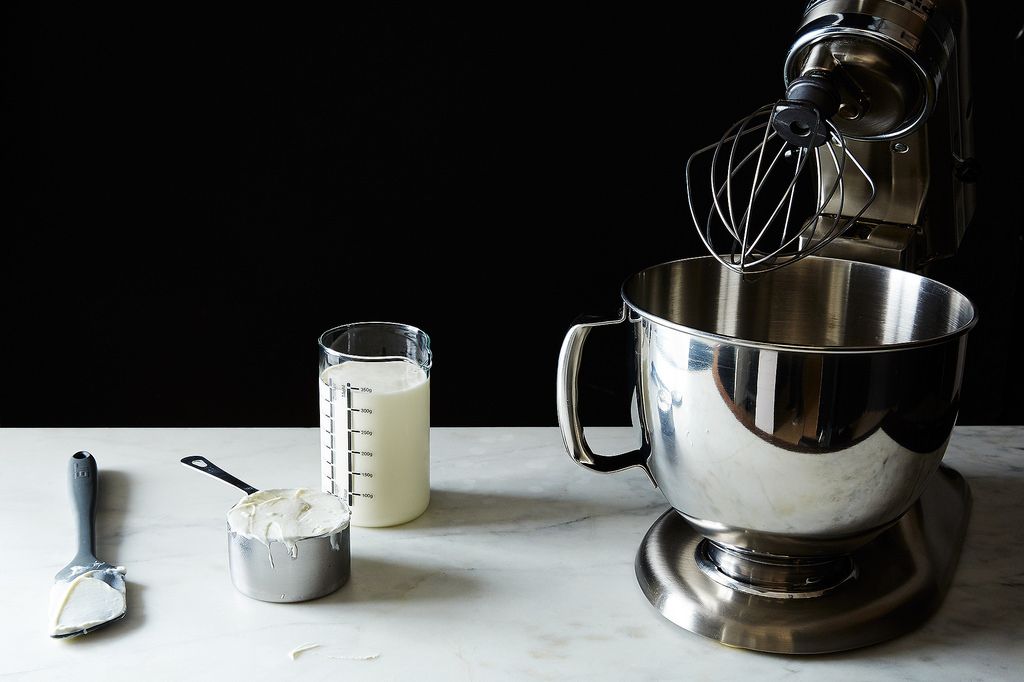 But there's an even better whipped cream—the next natural step in our ever-more-grownup palates—that I first encountered as an intern in the Saveur test kitchen. I was testing a rare not-too-sweet pavlova recipe, in which the delicate, sugary meringue shell was topped with fresh strawberry and kiwi slices, streaks of lemon curd, and a layer of whipped cream that was refreshingly tart—because it was actually one-third yogurt.

Not only does the yogurt make for lighter whipped cream, the flavor is also better and tangier—and a lively and effective foil to sugar. Most pavlovas I'd tasted up to this point were sweet on sweet on sweet, prompting me to set down my fork and itch for a bag of potato chips. This is not what you want your friends doing at your summer parties. 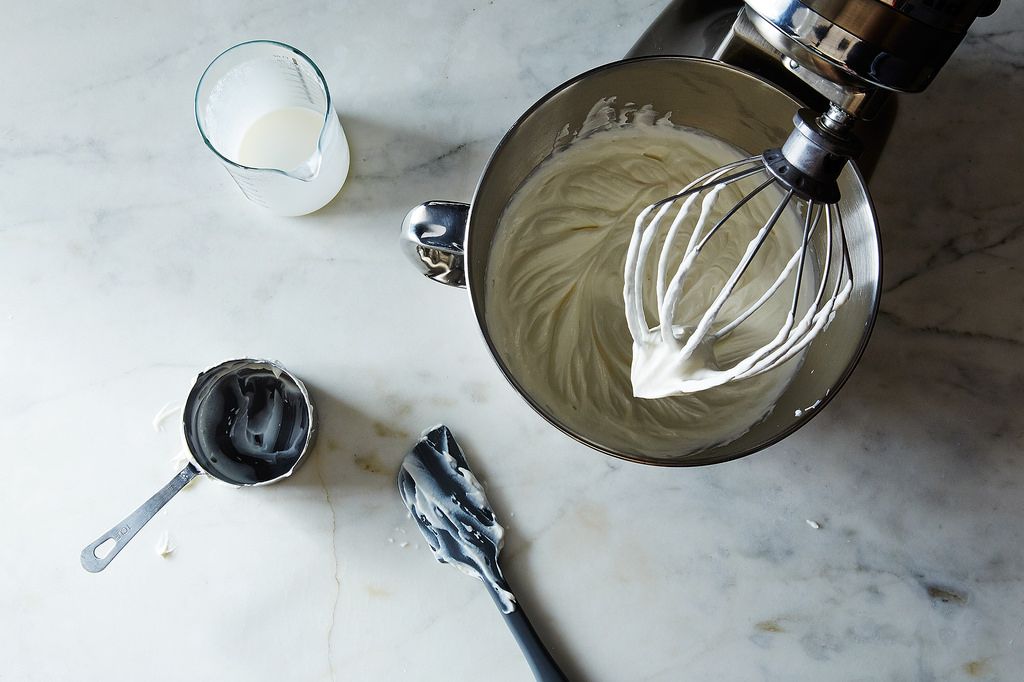 But people still seem to be shocked at the idea of whipping yogurt into cream. In early drafts of the Genius Recipes cookbook, I'd casually suggested serving Claudia Roden's Orange and Almond Cake with yogurt whipped cream. My editors didn't think this was clear enough, so I took it out and directed to Nancy Silverton's Whipped Cream recipe (stabilized with a small amount of crème fraîche) instead.

Even when I'm able to explain myself and the yogurt whipped cream better, everyone assumes I'm being daring, and that I'll need to fold in the yogurt carefully at the end. We seem to all think we have very little power over whipped cream: Whip it too early and it starts to weep; over-whip and it turns to butter. Why should cutting it with yogurt be easy? 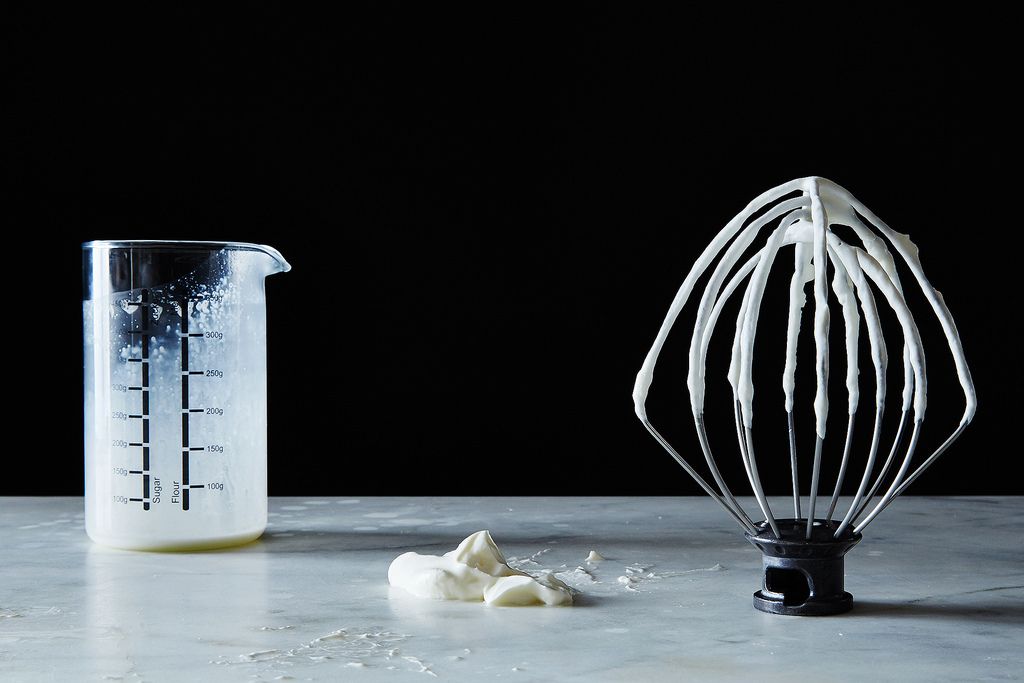 Whipped cream can handle a lot more chaos than we think (even when it gets a little bit too stiff, it can be smoothed out by folding in a dribble of cream—it's not a one-way street). You can whip as much as twice as much yogurt into it and it will still resemble whipped cream, and just taste more like yogurt. So folding in the yogurt after whipping would be just fine, but I actually prefer to just dump it all in together and start whisking—that way I can stop when it's exactly the texture I like, without having to recalibrate at the end.

Better still, with the milk fat slashed by swapping in lighter yogurt, it's also nearly impossible to over-whip the cream and turn it into butter. It probably won't go past soft, loose peaks. 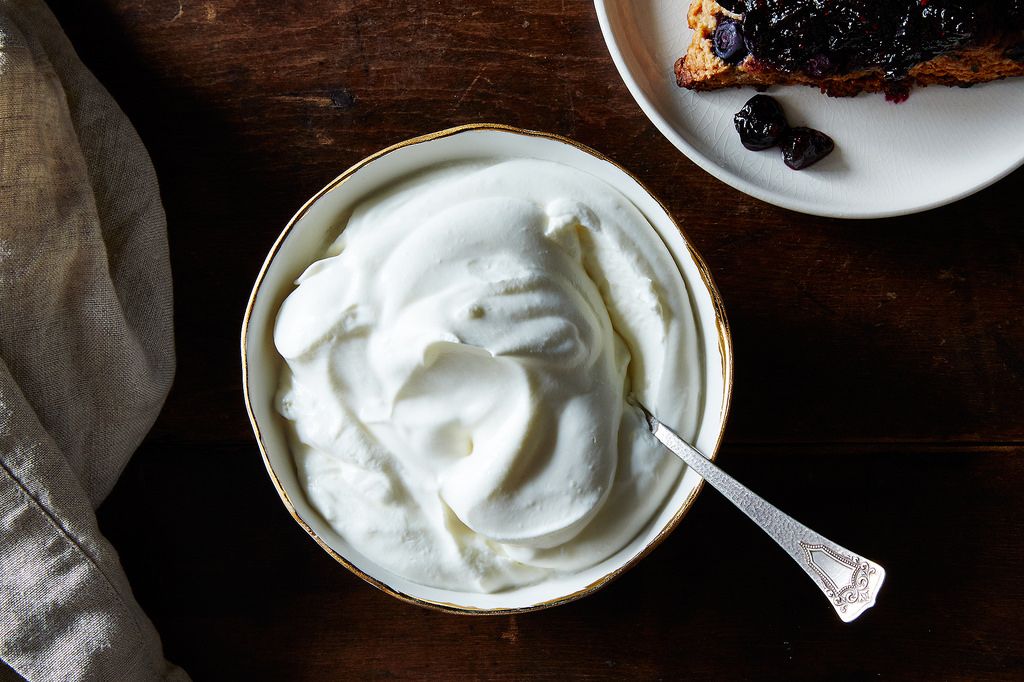 This gives us options. Back at Saveur in 2009, Greek yogurt wasn't widely available yet, so we used standard plain yogurt, but I've since found the thicker Greek style works just as well. This is also the most effective way to level out the deficiencies of nonfat or lowfat yogurt, to taste.

This ratio is only a guideline: You could flip it to be more yogurt-heavy to serve with granola or waffles at brunch, or take the yogurt down to just make the cream taste a bit cultured, to balance out a pie stuffed with berries. Or, instead of sweet shortcakes and pints of strawberries, you could plop your yogurt whipped cream on top of asparagus or steak or risotto or soup. Aren't you glad we grew up? 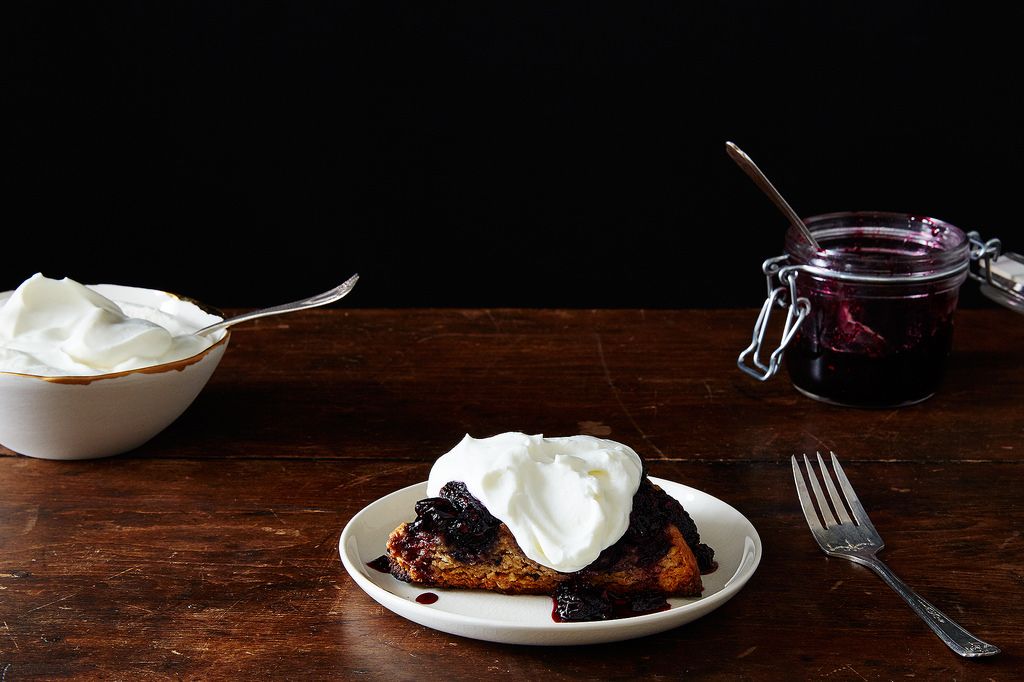 Makes about 3 cups of whipped cream

Shila S. September 8, 2017
I can't stop licking the spatula. It's absolutely mesmerizing in flavor and will be the perfect topping for a key lime tart that is pretty sweet and tangy.

Mercy June 26, 2016
Wonder if it could substitute for mascarpone in a tiramisu?

Lydia D. December 13, 2016
Mercy: I would imagine not. It looks like it would run loose out the sides if layered into a cake and cut. As the author said "it wouldn't go much higher than soft, loose peaks". If ever in doubt next time, do this: Cut a line through it with a spoon and jiggle the bowl, if the line holds firm, it's cake-worthy 😉

Sophia R. April 5, 2021
Only just saw this but wanted to say that Labneh (so drained yoghurt) actually makes a fantastic stand-in for mascarpone in Tiramisu - I love doing that actually, it's wonderful with fruity versions of tiramisu, like strawberry. But I would only do this with Labneh made from fairly rich and not overly tart/acidic yoghurt.

Laura415 June 11, 2016
So many ways to get the "tart" into whipped cream. I usually use creme fraiche for this but yogurt or lebneh or greek yogurt or even milk kefir made with half and half or cream will add the lightness and tartness to whipped cream.

Vicki B. July 2, 2015
My husband made whipped cream last night to go over an apricot crisp. I threw in a big dollop of yogurt as he was beating the cream. OMG, who would think that such a small change could make such a big difference in taste! Subtle but in the end a better synergy against all the sweet. This has now instantly become our standard way to make whipped cream.

AntoniaJames July 1, 2015
Well, it's pretty obvious we'll be all over this one for the pies I'll be taking out to the block party on Independence Day. Another winner, especially for those of us constantly searching for ways to cut the sweetness of summer fruit desserts. Thank you! ;o)

Yokeko July 1, 2015
Love this! I usually whip a little cream cheese into whipped cream for berry desserts. I think I will like this much more, and ditch the added calories too if I use the usual non-fat Greek yogurt I have on hand. Can't wait to try this!

Saffron3 July 1, 2015
OK, this is very creative good news for me. Thank you for adding a really simple yet logical gift of berry-good-oh-how-delicious to my future years!

mrslarkin July 1, 2015
whoa. this sounds most excellent. will it work in my thermo whip? Ima have to try it soon. Like right now.

Midge July 1, 2015
Yes! Still hard to believe we once lived without Greek yogurt.

Stephanie July 1, 2015
Definitely going to try this! AND eating yogurt with other dairy helps me with digestion!

healthierkitchen July 1, 2015
Love this idea!! Thanks!