I thought I would fall in love with fresh chickpeas—but I was wrong. 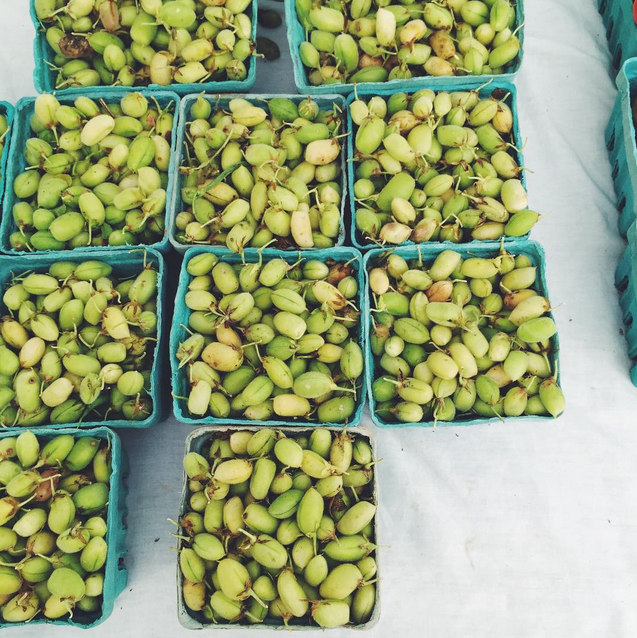 The produce that we only ever see at the farmers market—the weird stuff that makes us slow down, trip on that person Instagramming tomatoes, and take a second look—exudes a magical aura. It's a well-known phenomenon that microscopic fairies flutter near the fiddleheads, chanting in your ears: "They must be good! They're almost gone! You must buy them, eat them, and rave about them—immediately!"

@Francis_Lam Saying their name and seeing them is where the pleasure ends.

Today, I am making the bold statement that fresh chickpeas, too, may yield more pain than pleasure. At first, I was smitten with these fuzzy fresh chickpeas. The novelty! The intrigue! The Alfalfa hairdos!

I was excited to put them into a salad—until I started shelling. For the one pint we bought, Ali and I spent about an hour (this might be a little pathetic, but it was our first time) puncturing the tough pods to remove the tiny green peas inside. Ali, who is no stranger to fava bean shelling, claims she may have developed carpal tunnel in the process. 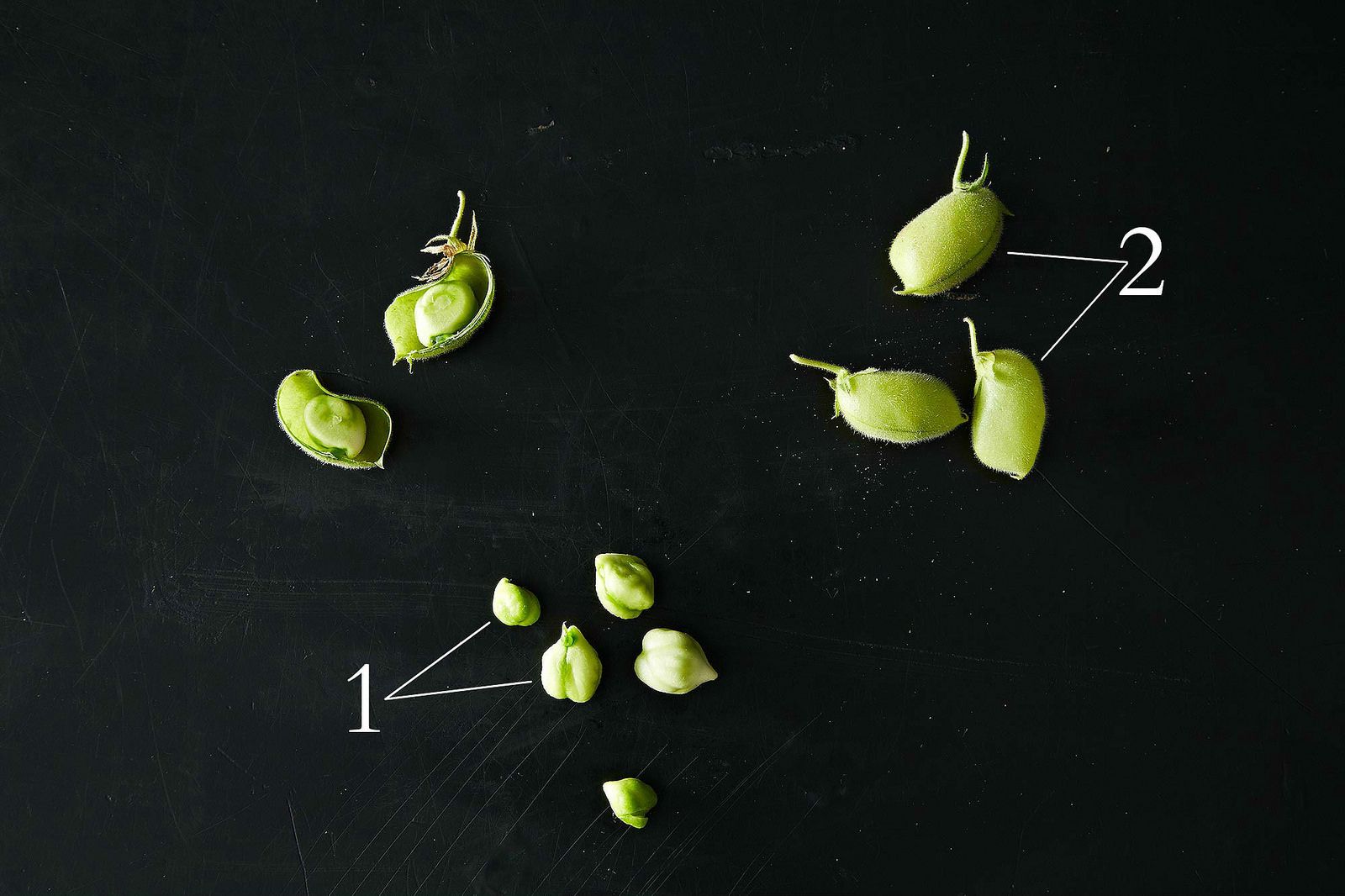 In the end, we were left with a scant handful of green pebbles. We blanched them in a shallow pot of water, then threw them into a salad. They tasted like regular chickpeas—only blander. I think I'll stick to dried chickpeas from now on.

Were we doing something wrong? Share your tips for preparing fresh chickpeas in the comments below!

Conrad N. February 8, 2020
You’re wrong. Click bait title and noob cook. Reader beware ignore this advice and get them fresh and make the best hummus ever. Garlic and preserved lemons.

Jennifer M. January 13, 2019
My daughter and I almost bailed on shelling/cooking some fresh chickpeas we bought, after reading this ... and I am SOOOO glad we didn't! Sure, it took a little time (during which we had a fun conversation about taking time for food), but 3 minutes in boiling water later, we had AMAZING fluffy little green peas, which with a bit of lemon olive oil, salt and pepper, were the highlight of our week (and we are hard to impress on food). WOW!

Christa N. May 27, 2016
My husband and I love edamames, and tried these just steamed in the microwave with a bit of salt. We thought they were yummy, like edamames but sweeter. Tonight I'm going to try the pan-grilled with olive oil method for an appetizer for an Italian meal.

Brad O. August 4, 2015
http://www.traderjoes.com/digin/post/melodious-blend - Green Garbanzo Beans (fresh chickpeas) are so good in this melodious blend from TJ's. And guess what.....you dont have to shell them!!

S. L. August 3, 2015
Fresh chickpeas should be eaten one by one fresh out of their skin fit fun, like chips or nuts... While drinking beer and enjoying a fun conversation with good company. Not to prepare/cook them and mix them with other stuff. Not worth the hastle.

Jan W. August 2, 2015
Aside from white beans like giant runner-type or cannelini beans, I really don't care for legumes in salad. However, I think fresh chickpeas have potential roasted or grilled in the pod. You can do the same thing with young favas and its fantastic.

Nadirah August 2, 2015
I second Rula's comment: you just need to roast them with salt. I keep them on hand to put in salads and pastas or just to snack on.

Rula August 2, 2015
In Jordan we just wait that time of year for fresh chickpeas, just toss them in a large pan after washing them, shells on, let them dry on high heat with regular stirring so they will not burn then add a large glass of water with good amount of salt.. Keep on high heat with stirring till they dry and become crinkly... Yummy more than chips as a salty snack... But be aware.. You need to scrub your fingers really good after finish eating

Jennifer W. August 1, 2015
When I was a server in college, my coworkers and I used to spend our slow times shelling fresh chickpeas and other beans or polishing glasses. This was our favorite past time at work. We loved it! I understand that when you're busy it's too much, but it's so relaxing and enjoyable when there's time to do it.

Patricia C. August 1, 2015
I grew them in my garden this year and was really excited to make hummus etc. out of the 30 foot row only maybe 10 plants thrived (I'm a professional gardener, not a novice) and from those plants maybe 20 total bean pods with one or two tiny beans inside their leathery, difficult to remove shells. I threw the TABLESPOON FULL of sad beans away after cooking and they tasted like nothing. I will stick to the canned or dried thanks.

Devangi R. July 30, 2015
The two common ways that I use fresh chickpeas is to roast them in oil with good amount of salt with their pods on or not is a personal choice. But grill it till you see charred spots. Also, I have used them in making filling for Indian appetizers called Kachoris - usually they are round or shaped like Empanada.Originally they are filled with fresh pigeon peas or peas. Here's the recipe - https://food52.com/recipes/17648-fresh-chickpea-and-peas-empanada

Simmi S. July 30, 2015
In India, we get them pre-shelled at the farmer's markets which means that fresh chickpeas get added to everything from curries to fried rice. My mom makes a mean curry with potato and green chickpeas

Praline P. July 30, 2015
These are literally one of the easiest to shell ever.

yvette July 29, 2015
Wish I knew why you had such a difficult time shelling your chickpeas, because we didn't find them difficult at all to shell. I enjoy fresh chickpeas quickly sautéed in olive oil, salt and pepper. Serve warm or room temperature on sliced French bread. Easy description and photos here http://www.ydelicacies.com/homepage/2014/12/11/fresh-garbanzo-bean-saut

Panfusine July 29, 2015
All that these seem to need is to waft some steam over them. Even blanching can be overkill for these. They're best when used as the center piece, given their edamame like mouthfeel in terms of texture. I lightly steam them (just about the amount you'd give when steaming your face in a facial) and then stirfry it lightly with a tempering of mustard, cumin and curry leaves. garnish wit shredded coconut and finely diced green mango. and yes a spritz of lime.
https://food52.com/recipes/27700-stir-fried-green-chickpeas-with-coconut

gwen S. July 29, 2015
Agreed they are a pain to peel, but are well worth the effort for certain dishes like fish tangines. Just like other fresh shell beans, they have a very toothsome, yum factor!

Brad O. July 29, 2015
Fresh chickpeas are amazing. Such a great flavor profile, a nice sweet flavor and a soft nutty crunch. Shelling each pod is a pain, but this farm now provides IQF fresh picked chickpeas without the pod...they do all of the work for you!!! www.freshanturefoods.com Now you can enjoy them year round without the work of shelling each pod.

Brad O. July 29, 2015
Oops...typo. www.freshnaturefoods.com. Their farm invented the technology to pick em fresh. They have much more information on the website.

Valhalla July 30, 2015
I have purchased fresh chickpeas frozen at Whole Foods, and they were great. When I purchased them from the produce section I had the same experience as the authors--underwhelmed. I don;t mid the shelling so much, but they were dry and just not good. It's like peas--unless you are growing them yourself, it's best to get them frozen at their optimum.

labingha July 29, 2015
Uh oh--we have six plants growing in our backyard. Though I will admit that the one pea that's been disrobed has now turned into a green, shriveled mess on the window sill.

Sarah J. July 29, 2015
I'm sure there are some great uses for them! I've heard they're great mashed up (and Greenstuff confirms!).

Maggie July 29, 2015
I've had them roasted in their pods in olive oil. They're a bit messy and laborious, but delicious.

Sarah J. July 29, 2015
Can you eat the pods? Or do you remove them after roasting? I love the Genius grilled fava beans recipe (https://food52.com/blog/3743-ignacio-mattos-s-grilled-favas) because there's no laborious shelling!

Maggie July 29, 2015
You just pop the chickpeas directly into your mouth, edamame-style. They're super tasty with flaked sea salt.