Stop Throwing Out the Best Part of the Watermelon

Today: The best part of the watermelon might be the skin. Discuss. 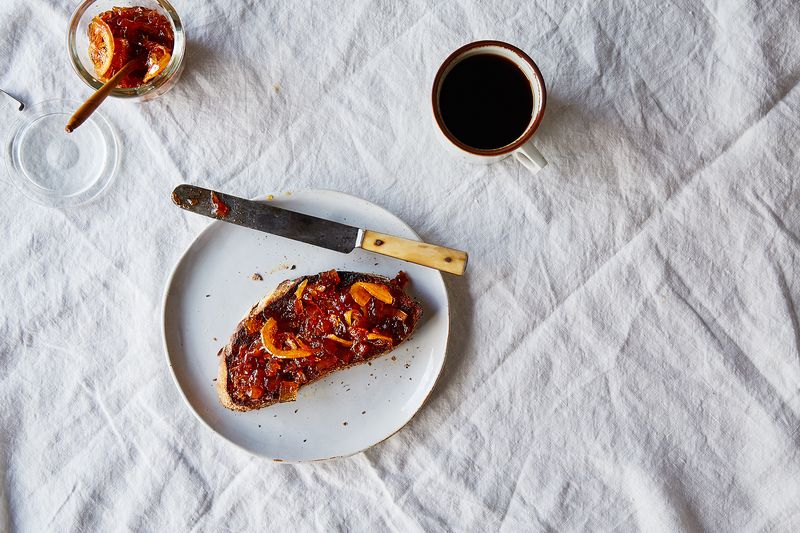 The stiff, white outer wall of the watermelon—for good reason—has always seemed like nature's cue to stop. "Back it up," says Nature. "Oh, and don't forget to compost ;)" 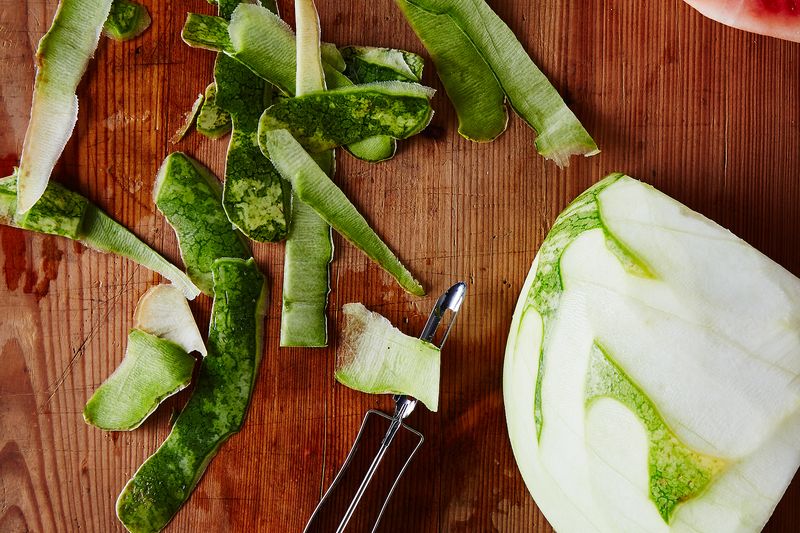 In reality, it isn't a stop sign, but a yield; like so many of the secret treasures of the plant kingdom (looking at you, artichoke!), you just need to suspend judgment and know the right way to get in. 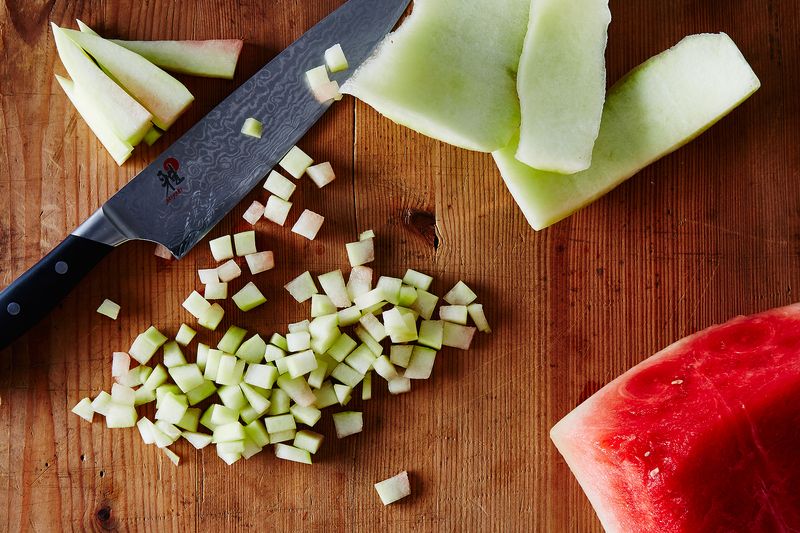 Here, in Olia Hercules' Watermelon Skin Jam from her new, beautiful Ukrainian cookbook Mamushka, the navigation is pretty straightforward: Peel off the tough green skin, chop up the white remains, mix them with sugar and lime and let them macerate overnight, then cook it all down to a sticky conserve. 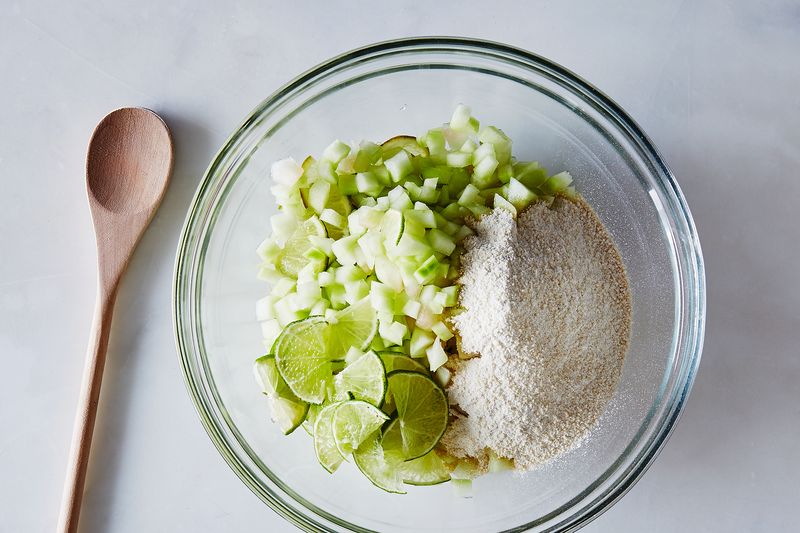 Despite the simplicity, you might be wondering if it's worth the trouble, and I don't blame you. I tried not to take it on myself (I already have jam, so…). I made it only halfway the first time, then got lazy and passed the recipe off to Lindsay-Jean Hard, our editor who oversees a lot of noble projects, including our new Cooking with Scraps column.

But after tasting her jam at our photo shoot, I had to steal the recipe back for this column (Lindsay-Jean is also the mom of a toddler, so she's very patient and versed in trouble-making). Since then, I've made several variations, including one without lime (tastes like sweet honeydew!) and one leaving on the dark green skins (olive-colored, and only marginally chewier!). 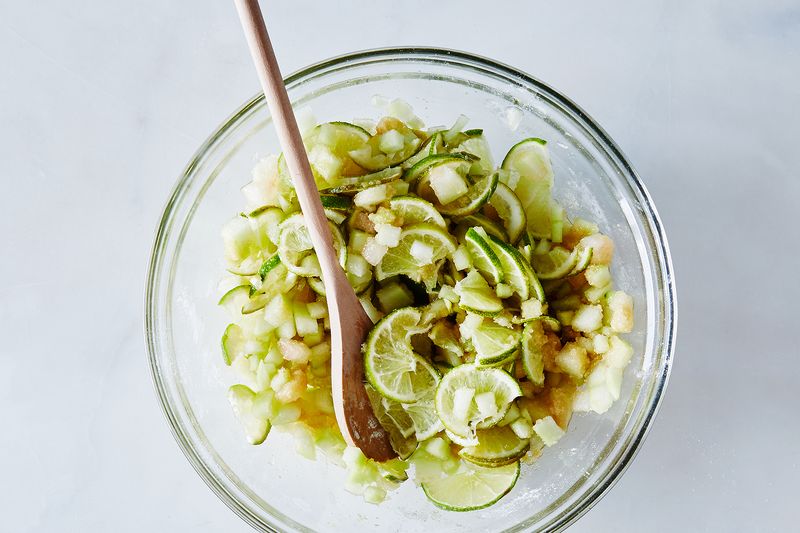 In jam form, the rind holds its own: What was once pale and crunchy turns into sticky, glassy caramel, with a slight candied chew. The lime slices are candied, too, adding fragrance, acid, and a bitter edge, as good marmalades do. "When I was little, it seemed like all of the 'old people' in my sphere had Sunkist Fruit Gems lying around," Lindsay-Jean told me. "This reminds me of the lime-flavored ones." 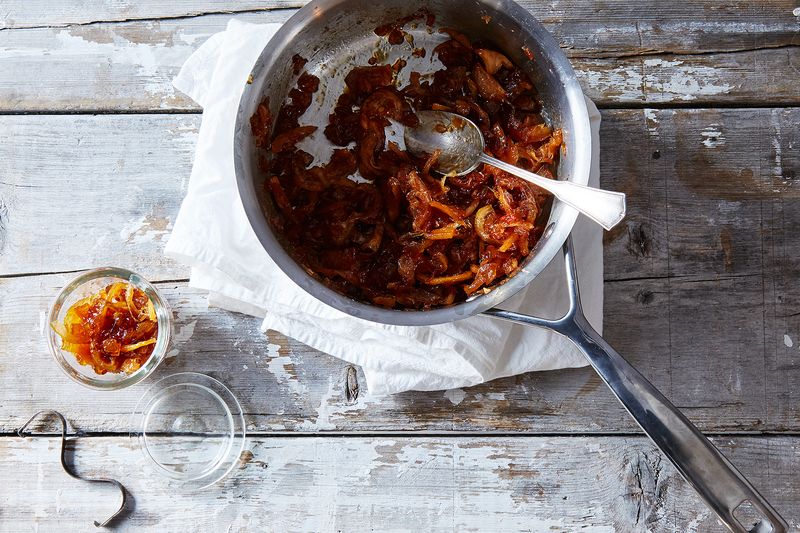 Yes, this is about making clever use of waste, as we're trying to do more and more these days. But it's also about seeing a new side of a fruit that provides a pretty straightforward experience most of the time. And not only does it have more depth and personality than you ever thought watermelon could, it's also the backbone to a better and brighter marmalade.

Plus, if you've already lugged a 10-pound watermelon home—you might as well make the most of it. Now we just need to figure out what to do with those seeds. 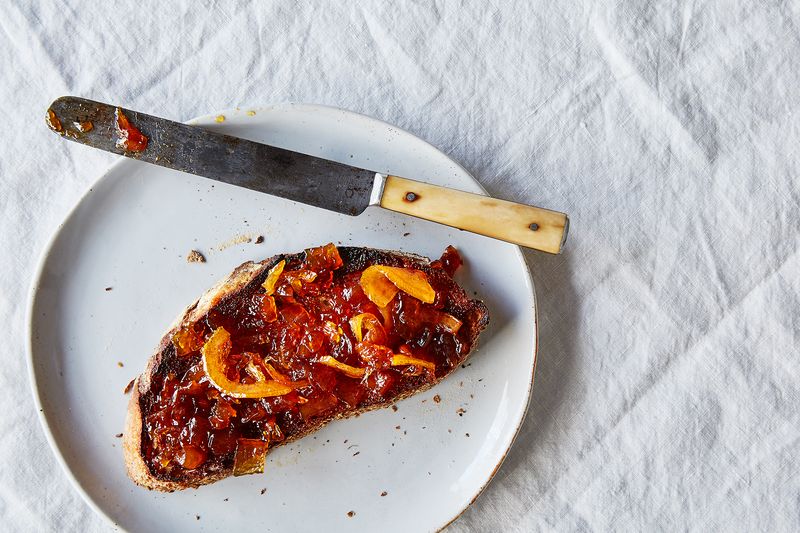 Got a genius recipe to share—from a classic cookbook, an online source, or anywhere, really? Please send it my way (and tell me what's so smart about it) at [email protected]. Thanks to our Associate Editor Ali Slagle for this one!

mad_mimosa August 27, 2015
Watermelon seeds... I think they can be dried, roasted and peeled just like sunflower and pumpkin seeds.

Wazza August 25, 2015
My wife uses the white of the watermelon rind in Vietnamese Coleslaw, instead of shredded cabbage. She juliennes and pickles it along with kohl rabi and carrots for a few days in a mix of white vinegar and sugar.

Jo M. August 18, 2015
In South Africa, Watermelon rind has long been used to make a delicious sweet preserve called 'Watermelon Konfyt' - scrumptious on scones! Here is a recipe (though nearly every SA family has their own version):
http://africhef.com/Watermelon-Preserve-Waatlemoenkonfyt.html

Pantry H. August 16, 2015
Hello please also note Stephanie Alexander's Watermelon Rind Pickle from her wonderful book The Cook's Companion published 1996. Slightly savoury translucent rinds of unctuousness, which she rightly compares to mostarda di Cremona....and a very preppy colour combo of pink clear/white and green if a little of the blush pink flesh is left on the strips when cutting!

Teresa D. August 16, 2015
My mother made delicious candied watermelon rind. Thanks for the memories.

thelastmike August 16, 2015
Has me wondering if I couldn't shred the rind and make bread. You know, just in case you don't actually have any zucchini left.

Penelope August 16, 2015
Thanks for the reminder! I used to make sweet pickled watermelon rinds for Christmas gifts. And you use the whole rind. It involves lots of sugar and spices and turns out like the best candy. I'd post the recipe but it is packed into a storage pod as I've moved across country and back to MN where a lovely elderly neighbor first intoduced me to this wonderful use for scraps!

Razena S. August 13, 2015
One of the first things I remember from weddings as a child was Watermelon konfyt. Not jam, but glaced watermelon using the white part of the skin. Homemade is the best of course, but the older generation who were proficient in making it are almost all gone, and the art is in danger of dying out.

mrslarkin August 12, 2015
I cannot wait to try this! Also, I'm saving my seeds and going to try this soon: http://www.countryliving.com/food-drinks/recipes/a2871/toasted-watermelon-seeds-recipe/

Lindsay-Jean H. August 12, 2015
I pluck out one of the slightly bitter, candied lime slices from this every time I open my refrigerator -- so, so good.