From the name to the eggplant preparation to the type of cheese and sauce, we're breaking down this Italian comfort food and its many variations. 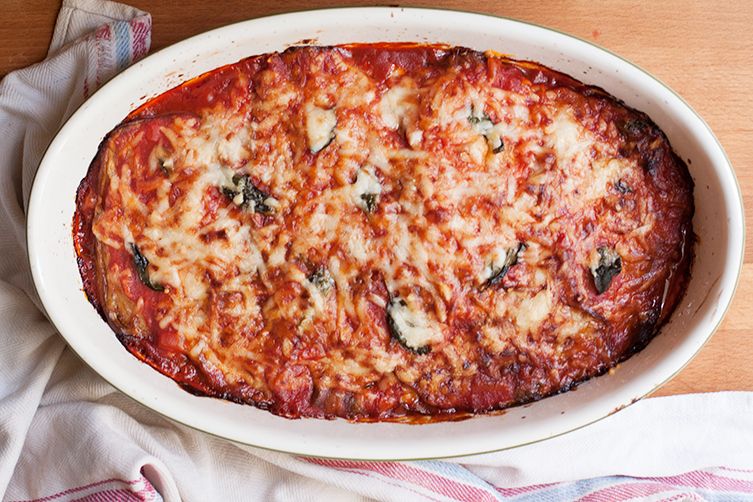 Eggplant Parmigiana is a true classic of Italian cuisine—resourceful, seasonal, economic, and deliciously satisfying all at once—that has made its way into the hearts and homes of people all over the world. Its history, however, is much debated: With both Sicily and Naples claiming it as their own (and with equally good reasons), this is a dish whose origins remain a mystery.

However, this dish is not from Parma, in Northern Italy. It's true name is Parmigiana di Melanzane—in other words, a parmigiana of eggplants.

So what is a parmigiana exactly? In Sicilian dialect, parmiciana refers to the type of wooden shutters with horizontal slats (also known as louver) that you typically see on palazzi in the region. One can easily imagine the visual concept of these layers of fried eggplant mimicking the layers of wooden slats in the shutters. 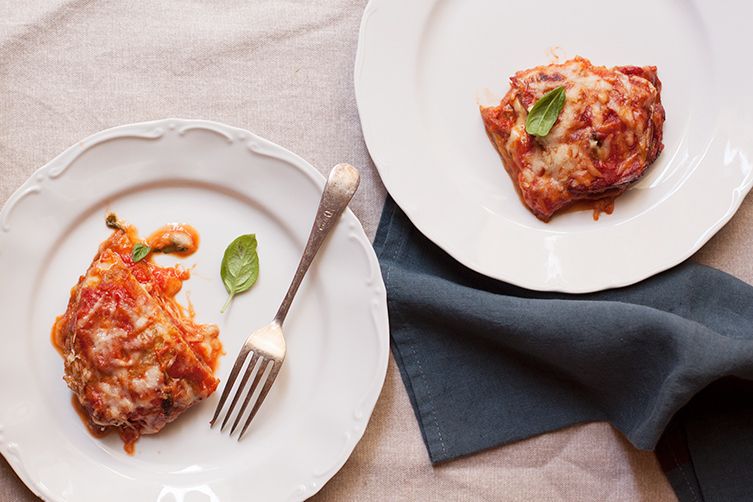 Prominent Italian food historian Massimo Montanari notes that the term “parmigiana” as a type of gastronomic preparation has actually existed for hundreds of years and can be found in Italian recipe books from the fourteenth and fifteenth centuries. And, in fact, you do come across modern recipes for parmigiana di zucchine (some think zucchini may be the original parmigiana, as it can be traced back to a recipe in a Neaplitan cookbook from the late 1700s) or parmigiana di zucca (made with pumpkin). This further supports the claim that the true name is not related to the city of Parma.

Now that we've got the name straight, let's talk the dish itself. It's most classic and basic form is deep-fried eggplant slices layered with a simple tomato sauce and cheese of some form, then baked until bubbly and golden brown.

But each household of every town in each region has their own take on the parmigiana—and that is precisely what makes this such a good dish: It's versatile and adaptable to different tastes and, undoubtedly, best when made from scratch, at home, with love for the people who are about to eat it. This also explains why, when you ask around, everyone says their nonna makes the best version of parmigiana. 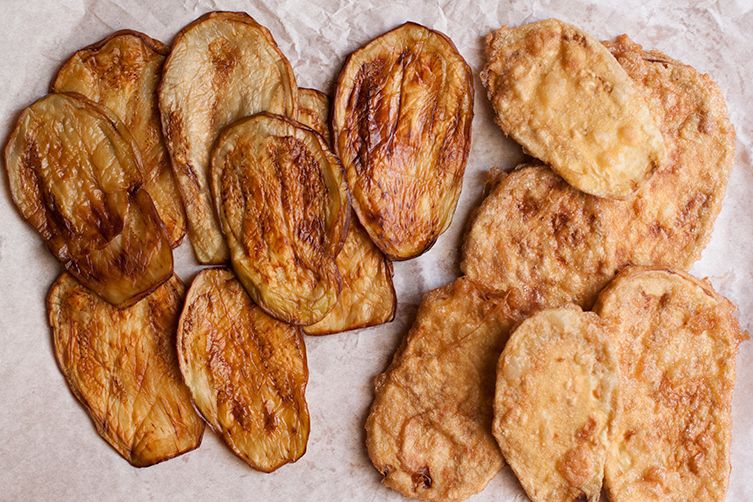 How the eggplants are treated is probably the most important part of the parmigiana. Those who are more concerned with health than flavor usually grill the eggplant slices. But this is neither traditional nor the best way to prepare eggplants for this particular dish. The most classic way is to deep-fry them, making the eggplant slices give way to an utterly silky, almost melting texture.

But Neapolitans are known for going a step further: dusting with flour, dipping in egg, and then deep-frying. The eggplant slices hold their shape a little more, drinking up a little less oil, but the result is a heartier, richer dish, one that would easily be the main (though some Neapolitan grandmothers would still contest that this is a side dish). Some even flour, egg, and breadcrumb their eggplants before frying.

Either way, the most important thing you can do in preparing your parmigiana is to salt the eggplants for about an hour before frying. It removes excess water in the eggplants, which means they take better to frying, and thereby improves both the taste and texture tenfold. Peeling the eggplant before frying is just a matter of preference. 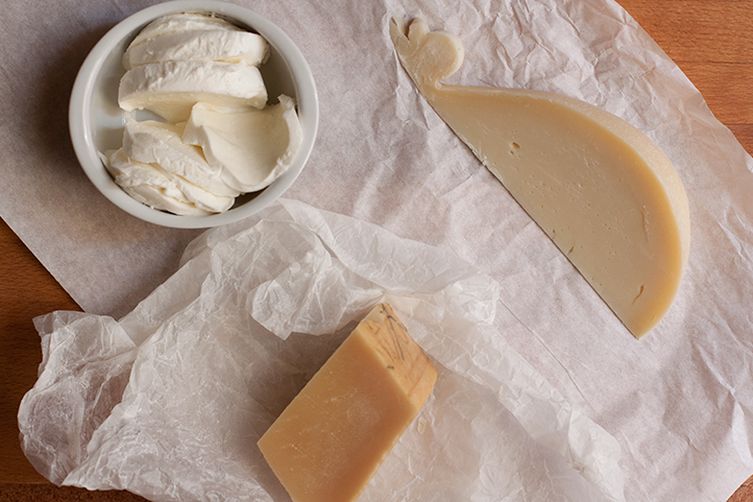 Fresh mozzarella, torn or sliced (then left out before using so that the excess liquid drains off), is common in Naples and makes for a quite creamy, cheesy, juicy parmigiana.

In Sicily, it's often pecorino, sheep's milk cheese, or caciocavallo, a large, semi-aged cow's milk cheese that you might see, most commonly, hanging like a sack from the ceiling of a good Italian deli or in the form of rectangular bars, piled high like bars of gold. It's a full-flavored cheese, similar to provolone (which could possibly substitute if you can't find the caciocavallo).

Parmesan, of course, is also commonly used (and this is perhaps why it's commonly thought of as the eponym of this dish), but historically speaking, Parmesan, a northern Italian cheese, was not widespread and did not make its way down to Naples or Sicily until after the Second World War. 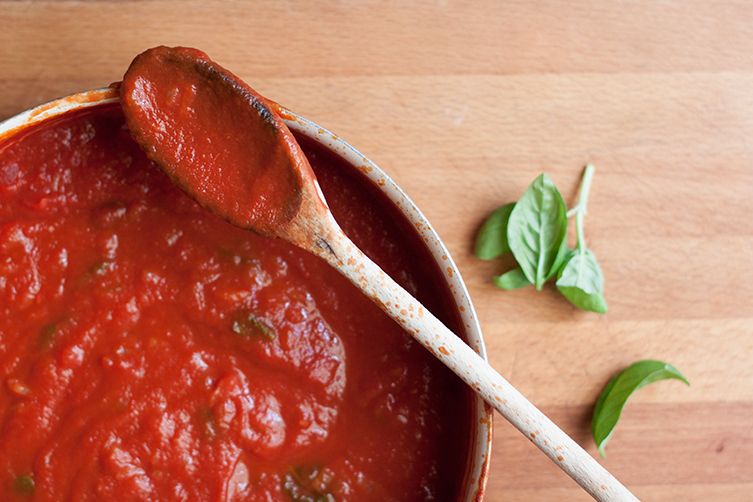 This might just be the one thing everyone agrees on: It's a basic tomato sauce made with yellow onions, tomato purée, and basil leaves. Someone might hrow a garlic clove in there, but it's not usually necessary. It's important to keep the sauce quite simple and very fresh to counterbalance the fried eggplants. Also, don't be heavy-handed with the salt: The cheese will do plenty of the work of flavoring the parmigiana for you. 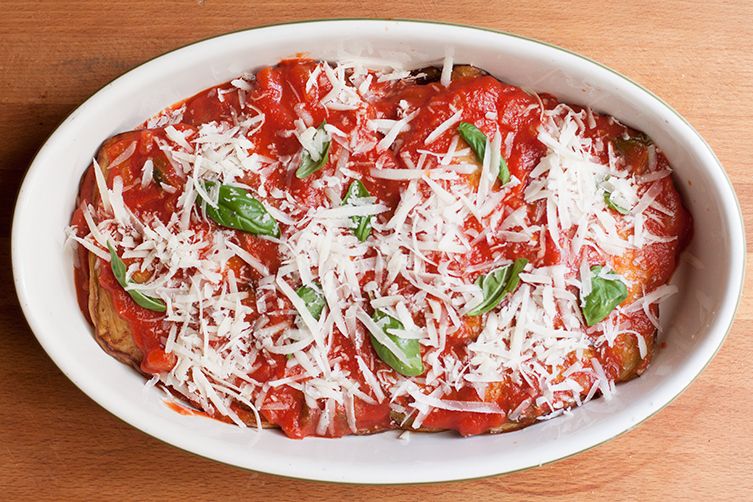 This is the fun part. This is the "stamp" that goes into the parmigiana to make it your own. Hard-boiled eggs, sliced or even left whole and layered in with the eggplant, is one of the most common additions. Thinly sliced ham is sometimes added along with the eggs. Scamorza, a smoked mozzarella, can make things interesting or, if you really want to get serious, you can crumble grilled pork sausages into the layers.

In Sicily, you might find recipes that call for a beaten egg mixed with a handful of grated cheese to be poured over the top of the parmigiana—it creates a beautiful, tasty golden crust that holds the whole thing together nicely. Some also like to top the parmigiana with breadcrumbs for a nice crunchy crust.

Want to pull it back a bit? In Puglia they have their own version of the parmigiana, such as this tomato-less parmigiana bianca. 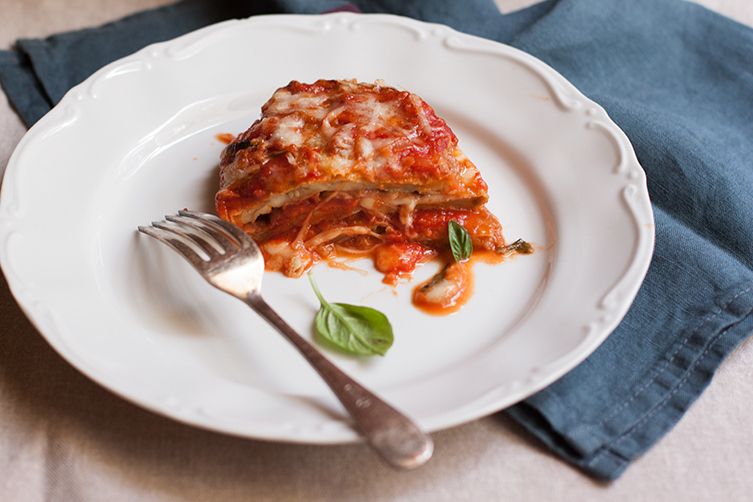 John D. September 8, 2016
Choosing a primary herb can change this dish's profile as a delicious side. Fresh basil, rosemary or Thyme can swing the dish to match whatever protein you are offering. And red hot chili flakes can crank up the heat with ease. Prefer grilling to frying for ease in digestion but all things in moderation a nice classic preparation can always be enjoyed medically permitted.

cucina D. August 16, 2016
My famiglia is from Lazio, right outside of Rome, our version of this delicious favorite is thinly sliced, pre salted and drained slices then coated in flour & egg before frying. I have crafted an alternate version that bakes the thin slices vs. frying which I think keeps the eggplant flavor prominent amd the dish is healthier. I also use only parmigiano, cacciocavalo etc formaggio as my famiglia did for years. Thanks for the lovely article about one of our favorite classics.

Emiko August 25, 2016
Baking sounds like a great alternative, thanks for adding this!

JanieMac October 28, 2015
This is one of my favourite dishes and the thing I order most often when in Italy just to explore the variations. When I make it I still fry the slices of eggplant in olive oil before layering it up, even though it is a killer amount of oil. So delicious and easily a meal itself with a salad and some good bread.

Emiko November 2, 2015
After making this in every possible regional variation possible, my favourite is fried too :)

Emiko November 2, 2015
Oh I love hearing things like this! An old lady in a market in Florence told me a similar thing about male/female fennel bulbs and it has changed everything! The male fennel bulbs (rounder too) are sweeter and better for eating raw in salad, for example.

Alison R. October 28, 2015
Wonderful article on the undisputed queen of vegetable "casseroles"! Thank you for the history and the tips.

Joanna T. September 2, 2015
Would somebody share with me the amount of eggplant this recipe would take...I know eggplant vary in size...but just an estimate would be great. This recipe looks amazing and reading all about it just makes me feel like I have to go to the grocery store or farmer's market as soon as humanly possible. ha

Emiko September 2, 2015
You need 2 pounds of eggplants! Depending on how big, heavy, young or old they are the number of them with differ which is why I specify weight (also usually in grocery store or farmer's market you pay by weight too not by how many you buy so hopefully they will have some way for you to weigh them!). As a ballpark guide, I find that here in Italy 2 large eggplants will fulfil this weight. But it all depends! :)

Joanna T. September 2, 2015
Thank you! Two large ones is a helpful start! I appreciate your help.

Nancy September 2, 2015
Wonderful to see an old stand-by with fresh eyes...thank you so much!

amysarah September 1, 2015
All too often here, people dig in about how a dish is 'supposed' to be prepared, as if these recipes are fixed, instead of having history and being regional. I love reading about the variations, which implies so much more latitude. Now I'm craving Eggplant Parmigiana!

Emiko September 2, 2015
Thanks, I agree - the many variations I think shows what a great, versatile and adaptable dish in any house!

Courtney C. September 1, 2015
Emiko, thank you so much for this article. Eggplant parmigiana is one of my favorite meals and it was really interesting to learn its history and that there is really no "classic" preparation of the dish. I have made it or had it at least a dozen different ways and some I prefer to others, but it is always a treat. I always enjoy reading your articles - thanks so much!