Real (Fresh!) Baby Corn—Not in the Can 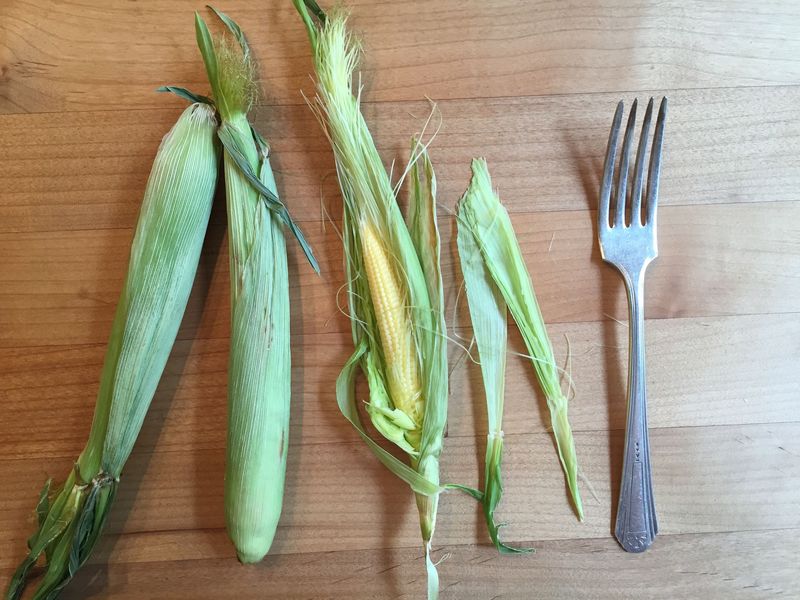 As someone who adores baby corn from the can, I’ve done my research: I know that those corn are indeed young versions of the big ones we might find at the grocery store. American farmers let theirs grow up to be big and strong because we're familiar with them, so we might be more likely to buy and cook with them. That's why fresh baby corn (also called cornlettes!) can’t really be found in the United States—some say the general public won't see them outside their own gardens.

Lies!! You can imagine my excitement when I found fresh baby corn at the Greene Hill Food Co-Op last night. They got the corn from Lancaster Farm Fresh, who got it from Eastbrook Produce in Smoketown, Pennsylvania. The little babes laid in a little wicker basket, 72 cents each. When I asked the cashier what people are doing with them, he said he was going to ask me the same thing: I was the first person to buy them. Rob from Lancaster Farm Fresh didn't have any recipes, either. He just said folks are pleasantly surprised to see them and that the farm they get them from are known for growing "really cute things" (including micro greens and squash blossoms). 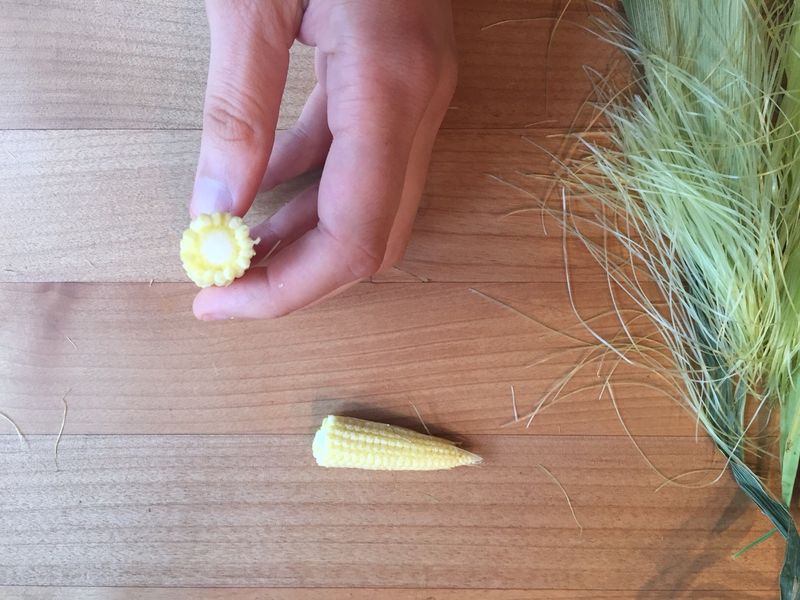 I hemmed and hawed about what to do with my three babies. They're so small and so delicate, I wondered if cooking might just obliterate them. (Then again, frying never hurt a thing.) Or maybe they're just a novelty—it’s hard to resist cute produce and something we can call a cornlette.

More: Why Lindsay-Jean urges us to cook with offbeat produce, cornlettes included.

But then I took a bite of a raw cob (yes, the whole thing). It was gently sweet—like the flavor of sweet corn ice cream—with the sprightly bite of quinoa. If more prevalent, it might trump olives as my favorite fun salad topping. And shucking them isn't nearly as kitchen-consuming as shucking their grown-up counterparts is. 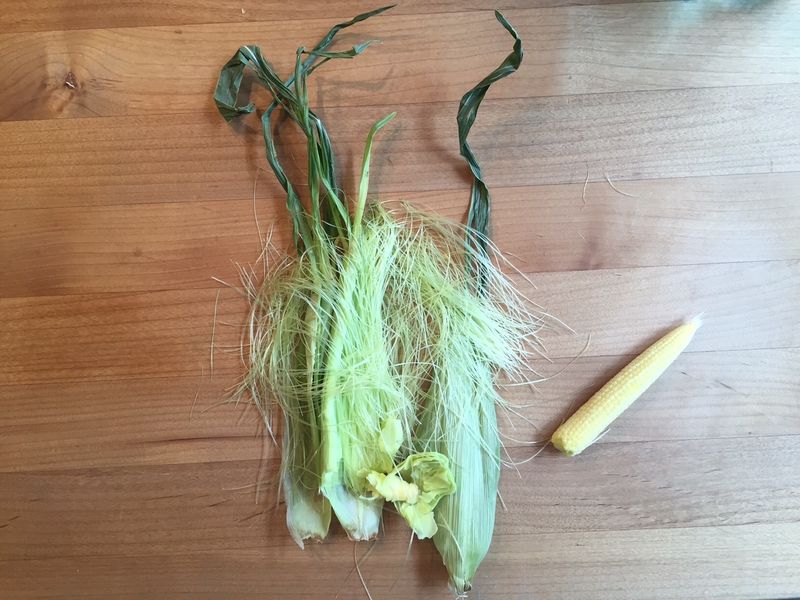 I'm dying to know: Have you ever seen fresh baby corn? And if so, what did you do with them?

christine July 28, 2019
I just picked up 6 from Lani’s farm Saturday - 50 cents each. Penny said they are good for your gums. I ate one raw and steamed the rest for 3 minutes tops. If you don’t know Lani’s farm you need to. Amazing produce. USQ and Tribeca on Saturdays. Also up by Columbia too. So delish 💜

Curt B. June 22, 2019
You can use them in stir frys. Like moo goo gai pan. Many Asian recipes call for them. I shop in H Mart, and other ethnic markets. Because they often carry these more exotic vegetables. I want to get them frozen. So far Wegmans only has them in a stir fry bag of frozen vegetables. I want a bag of just baby corn. So I have to find them and freeze them myself.

Kate F. June 14, 2019
Nobu in Malibu has it on there menu and it is incredible! The make it so it tastes almost like Mexican Street corn. I could eat it everyday!

Bre B. December 7, 2018
Wrap in bacon and grill them for a yummy appetizer, add them to other grilled veggies like zucchini and peppers instead of have the big ones taking up space. Steam with some green beans for a nice healthy side dish.

Curt B. June 22, 2019
I have friends in the UK, and I can confirm they are very popular there. But I am told eating to many can be bad for you. To much cob, can cause health issues, like gout. But you have to eat quite a lot before anything bad will happen.

Nikky18 September 15, 2018
They are very popular in up you can find then in local stores. Here in the USA, I can’t find them anywhere I’ve even tried the Asian markets but no luck. Trader Joe’s have them in their spicy Thai frozen rice, so some one must be growing them!! We need to get more of these baby corns I would give the as snacks to my kids back in the UK.

Tom G. September 14, 2017
If you go to any Chinese or Thai restaurant, you will see them in stir fry dishes and soups, like Buddhist Delight stir fry or Tom Yum soup. They're delicious and I find they go really well with soups, like New England clam chowder or corn chowder. Anywhere where you might normally add corn kernels you can replace with baby corn. As a fan of Thai food I would never make a green curry dish without some baby corn! I've never had them fresh, so it's going to be pretty exciting to try to order them fresh online!

Steven K. April 27, 2017
Very common in my husband's homeland which is Nicaragua. I was lucky to spot them here in NYC at Eataly on 23rd. They're grown in Guatemala and shipped here. It would be great to see a local press producer. They're sweet - he makes them in a sauce with tomatoes and some cream. Yummy!

Steven K. April 27, 2017
Very common in my husband's homeland which is Nicaragua. I was lucky to spot them here in NYC at Eataly on 23rd. They're grown in Guatemala and shipped here. It would be great to see a local press producer. They're sweet - he makes them in a sauce with tomatoes and some cream. Yummy!

Susan B. September 29, 2016
I recently saw them skewered longways and grilled with a spicy sauce drizzled over them at random. It was from an instagram post from India.

Steve B. May 10, 2016
They are an excellent addition to stews and soups. When I lived in Connecticut, I would find them fresh and organic at Stop and Shop most of the year. I haven't had any such luck in Miami, FL at Any market here. I would make a stewing beef soup that would take me about 2 hours. It would contain Cubed Beef, scallions, baby corn, red kidney beans, lemon juice, vine-ripened tomatoes, baby carrots, petite purple potatoes, celery, cilantro and culantro, turnips, sweet mini peppers, etc, etc. ..., it would be so wonderful any time of the year especially during winter, you can also add winter squash and or pumpkin.

Lorrie G. September 27, 2015
I grew my own corn as a teenager in the backyard of a suburban home near Toronto. I was so excited when the stalks started to grow. (all 6 of them) One morning I was out weeding and checking on things and I found little tiny stripped cobs all over the ground. Some bird (probably) had husked and stripped them all. I haven't seen fresh since then. And that was a loooong time ago.

Panfusine September 25, 2015
I cook them with the same ginger / onion/tomato 'masala used for making chana masala or rajma. they also pair very well with spinach, cooked like a saag paneer. the dish is called 'butta saag' (butta (pronounce boo tta) being the hindi word for maize.

702551 September 24, 2015
I see these often at my town's farmers market usually at stands run by Chinese farmers. Clearly, there is a market for this variety.

It's basically the same corn as the cans of mini corn. It's used a lot in Asian cuisine, so stir frying would be the easier way to handle them. As mentioned above, you can actually eat them raw (whole, including the cob).

About 250 years ago, almost all corn was this size or just slightly larger. Corn was bred over decades to become the larger item that modern Americans are all familiar with, but these mini varieties have existed for centuries and have been popular elsewhere on this planet.